3D printing news Rankings What are the Free CAD Software Solutions on the Market?

What are the Free CAD Software Solutions on the Market? 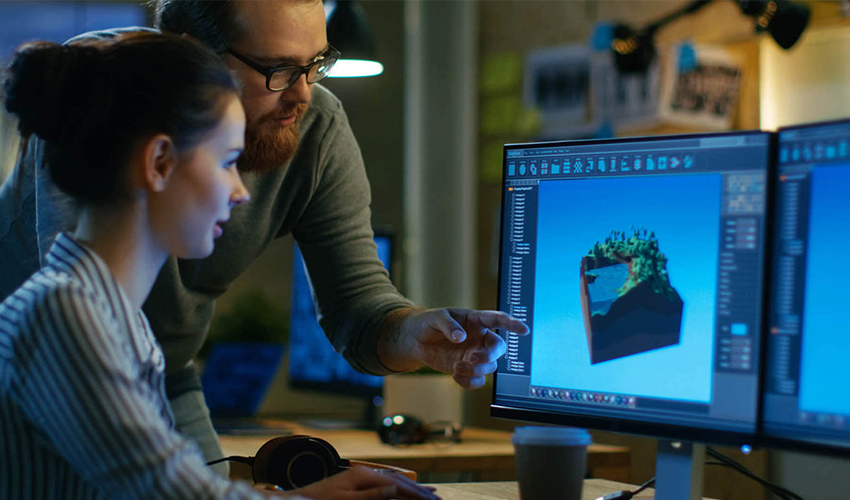 Before you can 3D print a part, you have to create a model. This stage of conception is essential and can be completed using several tools, notably CAD (computer-aided design) software. They allow you to imagine any shape, whether you start from scratch or an existing model. Most of these software also offer functionalities for modifying a 3D model, visualization and even simulation before printing. As you will have understood, each CAD software has its specificities and will meet the needs of beginners or more experts. So, faced with the multiplicity of tools available on the market today, how do you choose? We’ve put together a selection of free CAD software which will allow you to test different options without costing you a dime. However, a few offer a premium version, meaning some features will be free but if you want to go further, you will have to pay a subscription. We have therefore divided our selection into two, the 100% free software and those with premium options. Note that there are also free CAD software for certain profiles (Fusion 360 for individuals, CATIA for students) but we have deliberately left them aside.

This free CAD software was primarily designed for beginners and the education sector. Easier to use than OpenSCad, it recommended to begin with BlocksCAD. The platform functions somewhat similarly to LEGO, in that you must add take away building blocks of various shapes to obtain the final part. You are then left with the simple task of exporting the file in STL format in order to be able to 3D print it. Subsequently, if you want to design more technical and complex models, you will have to change the platform and go to OpenSCAD, a platform which is considered to be the advanced version of BlocksCAD.

If you are a LEGO enthusiast, then LeoCAD software is the CAD program for you. Targeted towards beginners and people wishing to discover 3D modeling, this free CAD software allows you to design models using LEGO bricks. A design mode which makes the program more accessible to children, and which makes LeoCAD one of the main software used for educational purposes. In addition, the program allows the creation and modeling of relatively large models, which require a lot of parts. Finally, LeoCAD is open-source and offers the possibility to its users to share their models. 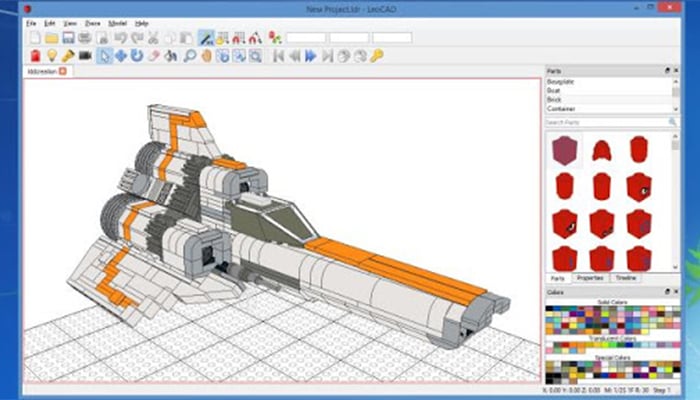 An example of a model designed on LeoCAD (photo credits: LeoCAD)

Created in November 2013, 3D Builder is Microsoft’s 3D modeling software. Compatible with PCs and systems using Microsoft (Windows mobiles, Xbox One and Windows Hololense), 3D Builder is 100% free. The CAD software contains a wide range of 3D models which can be downloaded for free from the interface. For the more creative among you, Microsoft’s software offers the creation of 3D models. Relatively intuitive, it suffices to add, superimpose or cross simple geometric shapes. Highly appreciated by users, 3D Builder also offers users the possibility of scanning objects that they would like to 3D print with their smartphone.

Developed by Autodesk, Tinkercad is CAD software designed for all levels. Easy to learn, it has been adopted by teachers, beginners and designers. Tinkercad can be used on any web browser. Released in 2011 and acquired two years later by Autodesk, it is based on the construction geometry of solids to create models. These can be saved in 3 different formats (STL, OBJ and SVG) and are therefore compatible with 3D printing. Finally, Autodesk software also allows the creation of electrical circuits and computer code.

Developed to design objects of any size, FreeCAD is also free modeling software. Suitable for all types of users, from beginners to designers, FreeCAD is open-source. Capable of exporting files in many formats (STEP, IGES, STL, SVG, DEX, OBJ, IFC, DAE), this free CAD software is compatible with Microsoft Windows, Linux and Mac. Mainly intended for mechanical design, other sectors such as product design or architecture have recourse to it. The latest version of the free CAD software is 0.19.1, and was released on March 20, 2021.

Running on Linux, Mac and Microsoft Windows, OpenSCAD is a more technical software to use because it is based on its own scripts and therefore its description language. It allows users to create 2D and 3D objects, intended for 3D printing. OpenSCAD offers the possibility to export files in AMF, CSG, OFF, DXF and STL formats. The software is recognized for its ability to create designs for machine parts.

Like TinkerCAD, MeshMixer is free CAD software offered by Autodesk. Available on Microsoft Windows and Mac, Meshmixer is intended for 3D model retouching and design. For example, it offers editing tools to hollow out models. The great quality of this software lies in its accessibility. You don’t have to be a professional to be able to use MeshMixer, and get models with precise details. Especially since in the software archives, many models are available. 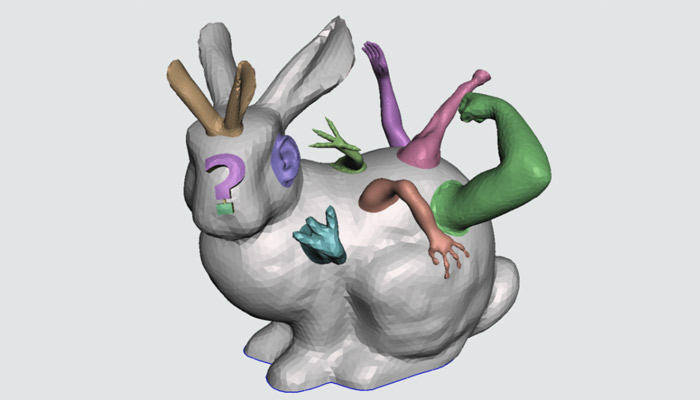 There are several functions available on MeshMixer

Initially dedicated to architects, SketchUp is a free CAD software with a premium version. Previously named SketchUp Make, the free version is now called SketchUp Free and is available on any web browser. The free version offers a library of models and a storage space of 10 GB. The specificities of the paid version mainly concern terrain modeling and rendering functionalities. For example, SketchUp Pro allows you to create immersive animations and has tools specific to terrain modeling. It is marketed at a cost of $199 per year. Finally, a last version of SketchUp intended for makers and designers exists. Above, as on the pro version, you can have unlimited cloud hosting. All of these versions have the ability to export files in STL format, and are therefore compatible with 3D printing. Called SketchUp Shop, this version is available at a price of $119 per year.

Developed for 3D printing, virtual reality and augmented reality, Leopoly offers both a free and a paid version. The Makersleopoly platform, available on internet browsers, is considered by many to be a good way to learn about 3D modeling. Users can start from a base of modeling clay or use existing models. It is of course possible to export files in STL and OBJ formats to be printed. But if you want to go further, Leopoly allows its users to make an appointment with an expert, who can help determine your exact needs and the features you require to fulfill them. This will then result in a tailor-made price.

NanoCAD is a free CAD software offering various design tools to its users. By virtue of its functionalities, it makes it possible to design simple and complex models, intended for modeling or construction. For example, thanks to the principle of parametric modeling, NanoCAD makes it possible to modify old designs and model them according to the user’s needs. However, for those who want to go further and benefit from more features, the Plus version of NanoCAD is available from $180.

OnShape is a CAD software created in 2012 by two former CEOs of SolidWorks. The strong point of OnShape lies in its ability to make users collaborate on the same model using web servers. The platform offers various functionalities such as nomenclature, configuration, data management and of course collaboration. Thanks to its cloud-based system, users can use it on multiple devices (computer, tablet, phone). Available on Mac PC, Linux and Chromebook, different versions of OnShape exist. The Standard version, sold at a price of € 1,260 per year, is intended for people requiring CAD software to collaborate and manage data. And for those who wish to acquire the professional version of the software, it is available for the sum of 1766 € per year.

Which free CAD software do you prefer ? Let us know in a comment below or on our Facebook, Twitter and LinkedIn pages! Sign up for our free weekly Newsletter here, the latest 3D printing news straight to your inbox!