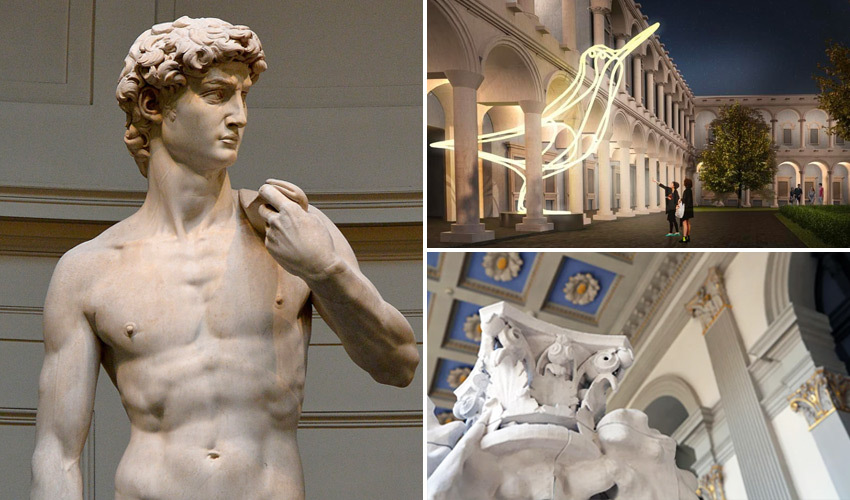 3D printing gives a completely new meaning to the saying “art knows no boundaries,” proving that new technologies and creativity are in fact very compatible, contrary to popular belief. Because the use of additive manufacturing allows artists to go one step further in their creative process. Keyword design freedom: working with additive manufacturing processes enables the realization of highly complex geometries with a high level of detail. Advantages that can be used to create replicas for museums, for example. But the application of 3D printing in the art sector is by no means limited to this purpose. More and more, the focus is on the additively manufactured object itself. The technology is increasingly being adapted by artists as a tool with which the realization of an idea knows hardly any limitations – except gravity. In our selection, we would like to present some current examples that we feel illustrate the importance of 3D printing for art.

The sculpture “hypnerotomachia naturae”, which was realized by Stefan Maier and Giacomo Pala under the supervision of Bart Lootsma at the Institute for Architectural Theory at the University of Innsbruck, is at first glance reminiscent of a construction kit. And deliberately so: because the modular construction is meant to remind us of the connection and contradictions of man’s relationship with nature and technology. Hypnerotomachia was realized in concrete in collaboration with concr3de and exhibited last year as part of the exhibition ‘beauty before wisdom. the knowledge of art and the art of science’ at the Tiroler Landesmuseum in Innsbruck. On display is a multitude of individual parts that are connected with each other to form a large whole. The individual objects are intended to remind the viewer thematically of the diversity of utopias, myths and cultures. 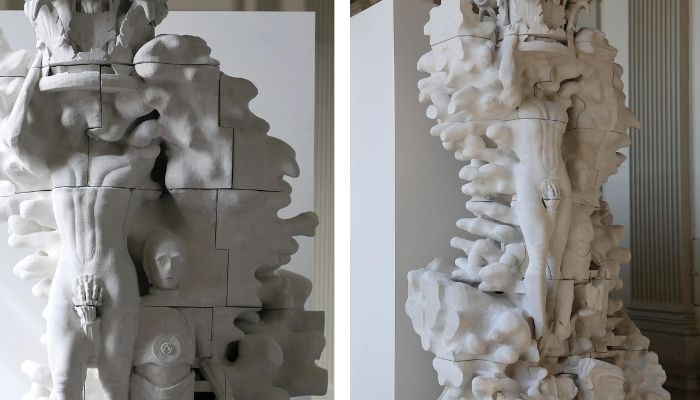 For the World Expo 2020 in Dubai, which due to the pandemic actually just started recently on October 1st,  2021, the artist Mat Collishaw has come up with something special with the work “Equinox”. In an optical illusion, a gigantic lotus flower in the center of the Terra Pavilion truly comes to life. The blossoms spin, insects circle and flutter around the flower, pollinating it. For this ecological dance to succeed, the five-meter high and three-meter wide zoetrope opens and closes with the help of hydraulics. opened and closed. The petals were all 3D printed. It is not known which process the artist used for the realization, but we do know that Collishaw has in the past created a zoetrope for the Galleria Borghese in Rome in collaboration with the Spanish company Sicnova 3D. 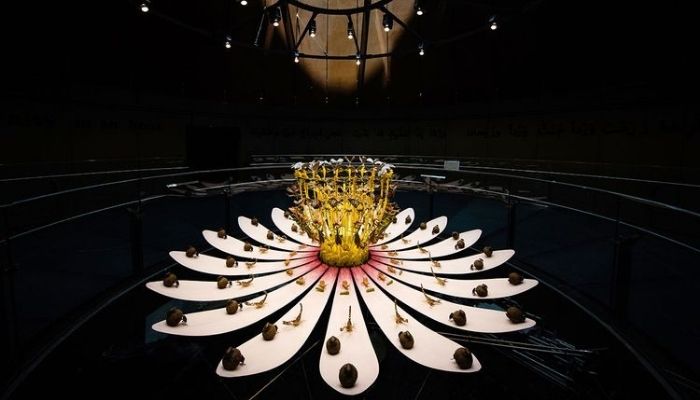 Created specially for the World Expo 2020 in Dubai, the Italian pavilion has produced a replica of Michelangelo’s David using 3D technology. The engineering department of the University of Florence and the Swedish hexagonal industrial group are behind the project. The 3D printed statue, which represents the biblical hero David as he approaches his battle with the giant Goliath, is the same size as the original, over 5 meters high. And in order to fully digitize the work, thousands of scans were required. As for the printing, the organizers of the project decided to divide the work into 14 printable pieces. They were printed from acrylic resin, and then assembled by art restorers using glue and marble dust.

Developed by Peter Lang and acoustics experts from the University of Applied Sciences in Rosenheim, Silent Orchestra is a 3D printed sculpture. Inspired by the nests of wasps and hornets, the work acts as an acoustic absorber. Composed of tubes of different sizes, Silent Orchestra was 3D printed using the FDM process. To do this, Peter Lang first hand-drew the outline of the object in each layer on 3 x 6 meter sheets of fleece before scanning them. Then, in collaboration with Additive Tectonics, the sound absorber was 3D printed from Tecnaro’s Arboblend biopolymer, which is 100% bio-based. A unique and sustainable work of art, capable of absorbing sound, that combines the best of craftsmanship and new technologies. 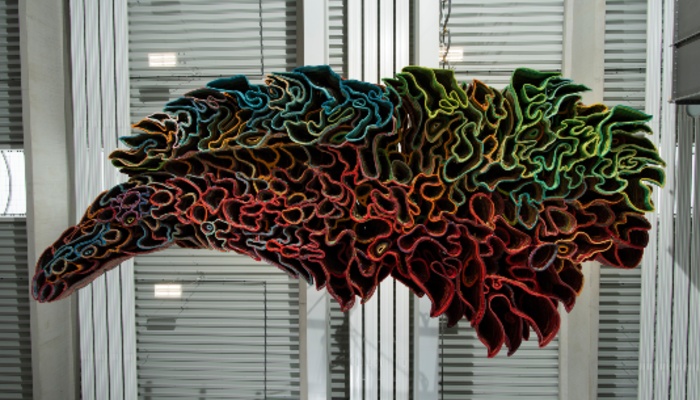 Joseph Coddington, a student at Victoria University of Wellington, has carried out an interesting project that combines 3D printing technologies with works of art. Specifically, he has analyzed how voxel additive manufacturing can be used to replicate a panel from artist Claude Monet’s “Water Lilies” collection, a series of paintings created between 1914-26. To do this, Coddington replicated the painting digitally and then used the Stratasys J750 3D printer to produce the prints. This method allowed him to define a color for each individual dot, called voxels, throughout the volume of a final model. He further states that his goal was to showcase the new applications and artistic qualities that voxel 3D printing can offer in art. 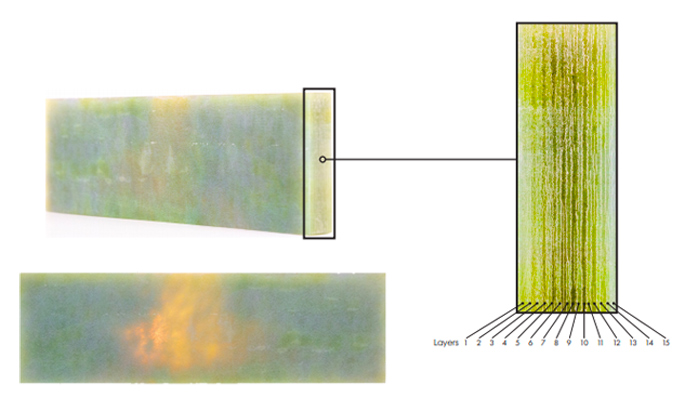 The so-called Yinyun is an art installation composed of 85 3D printed ceramic pieces. It is located in the Taipower D/S ONE showroom in Taipei, Taiwan. In order to successfully develop the project, those responsible used a generative design algorithm to extract the electrical data and visualize it on each unit, creating a gradient effect. Later, additive manufacturing technologies came into play to create each of the parts using ceramics, specifically based on a mixture of recycled material. At the same time, they managed to create an original detailed surface relief thanks to this technique. The main feature of the Yinyun installation is that the complex shapes of the pieces mean that none of the units is the same as any other. 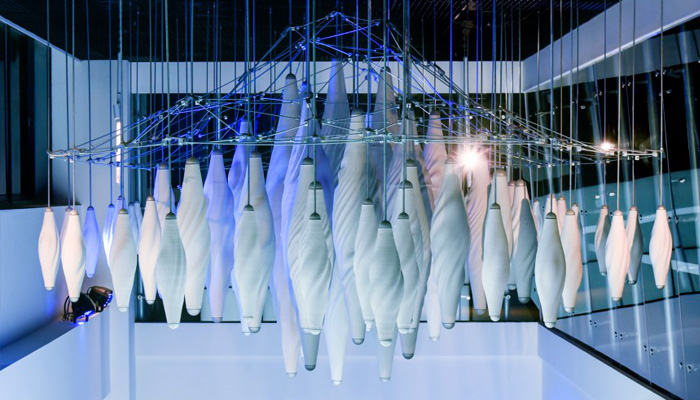 New York-based designer Sebastian Errazuriz has developed a collection of statues for New York’s Elizabeth Collective gallery in May 2019. While the project is not brand new, the characters represented are familiar to all. The artist has taken some major personalities like Steve Jobs, Trump, Elon Musk and Jeff Bezos and turned them into 3D printed statues reminiscent of Roman mythology. The collection has been named “The Beginning of the End” and seeks to show all the technological changes that will change humanity. It uses technology as a way to denounce the impact of technology. Thus, we can see the bust of the founder of Facebook, called “The New Opium”, with this idea that we have become addicted to the social network. The team first retrieved hundreds of images of these personalities to reconstruct them in 3D, a time-consuming task that took several months. We don’t know what printing technology was used but the details are there! The video below goes over the whole project:

For the London Design Festival held last September, French architect Arthur Mamou-Mani imagined Mellifera: The Dancing Bee Hives, a set of 3D printed structures reminiscent of beehives. 3D printed from PLA, they were installed in the center of the spiral staircase of the famous Fortnum & Mason store in Piccadilly. The aim of the architect is to remind the importance of bees in our society and the need to rehabilitate our urban spaces to allow them to survive. He chose 3D printing and more specifically PLA for its lower environmental impact. Arthur Mamou-Mani stated in an interview that PLA has a carbon footprint up to 80% lower than its petroleum equivalents. 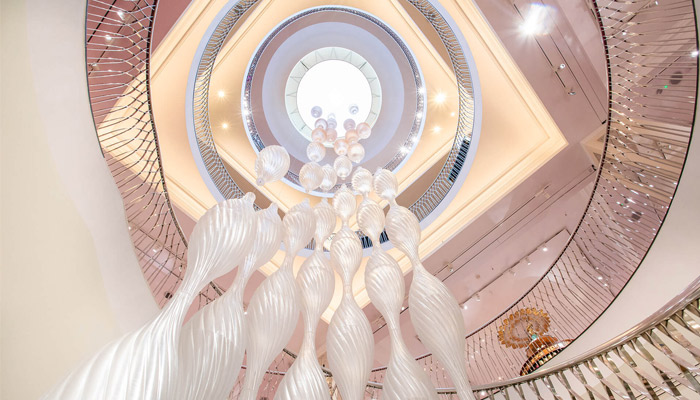 During Milan Design Week, MAD Architects, headquartered in Beijing, debuted their 3D-printed furniture design project. For the project, the studio reinterpreted Christian Dior’s iconic piece of furniture, the Medallion Chair. Using 3D printing technology the design studio was able to depict the set of chairs being in motion. According to the designers, the 3D-printed polyurethane chairs, entitled “Meteor”, serve as a reflection on time and space. 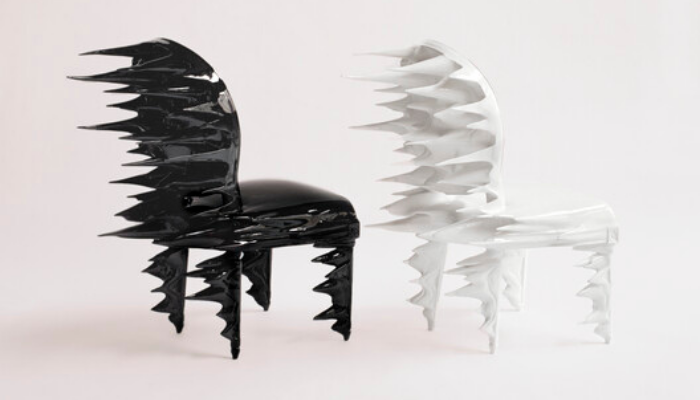 Though unconfirmed whether the former German head of state was an equestrian during her lifetime, a Bavarian artist took creative license, depicting Angela Merkel riding horseback in a 3D-printed concrete statue. The life-size statue, sitting 2.70 meters high, is to commemorate the years of service from the first female chancellor of Germany. The artist, Wilhelm Koch, 3D-printed the statue using recycled concrete, which can be interpreted as a nod to Merkel’s political work towards climate change policy. 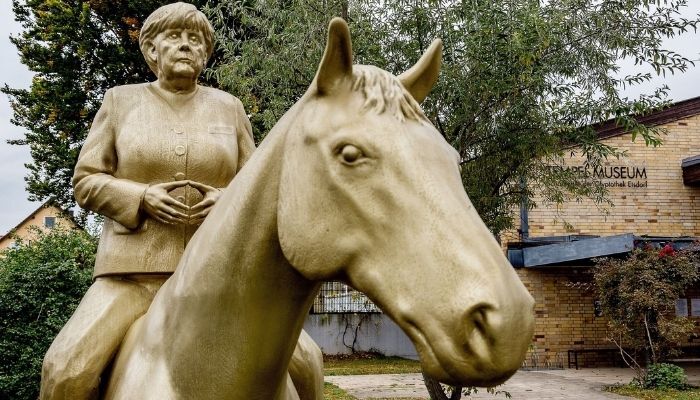 ‘Hold Your Nose’ by Alan Phelan is a 3D printed, 5.5-meter-high sculpture made out of eco-plastic and paper that is on display in Dublin, Ireland as part of an initiative from the Dublin City Council to commission six public sculptures for parks and public spaces throughout the city. ‘RGB Scone, Hold Your Nose’ was the first to be commissioned. The sculpture was designed to be put on a historical plinth that has been empty in Dublin since the original statue was removed in 1860s. The ‘exuberant’ sculpture was made first as a readymade, small-scale model which was then 3D scanned and printed to scale before assembly. The artist was inspired by different forms of emancipation from the area including Irish independence, EU Presidencies, tribunals of inquiry, and important civic events related to marriage equality and reproductive choice. 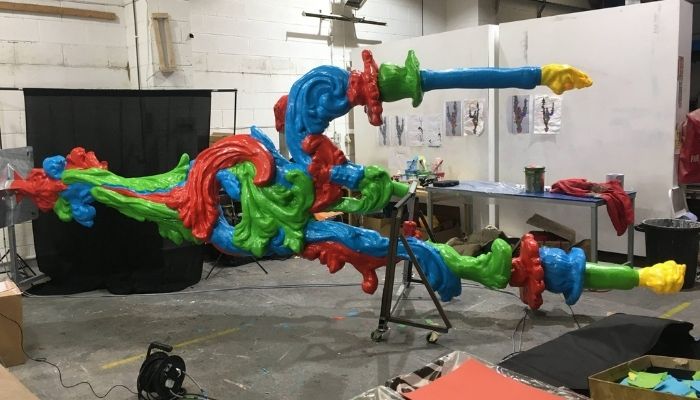 The sculpture after printing and papering and before installation (photo credits: Alan Phelan)

One application for art in AM that might be a little out of the box is a project that was presented at the 2021 Venice Architecture Biennale, Magic Queen. Magic Queen is a 3D printed biodegradable structure made out of local soil that has been designed to be a landscape for different plants and mushrooms. It is tended to by a robotic gardener that both waters the landscape and senses for changes in surface texture and growth of the flora on the structure in order to maintain the landscape. The project was created by MAEIN, a practice led by Daniela Mitterberger and Tiziano Derme, and was designed as a way to show the fusion between organic materials and machines, proving the possibility of empathy and co-existence of the two. 3D printing with soil allowed the designers to create a unique structure perfectly suited to sustain life. You can find out more in the video below.

What do you think of our choices for 3D printing in the art sector? Did you already know some of these projects? Let us know in a comment below or on our Facebook and Twitter pages. Don’t forget to sign up for our free weekly newsletter, with all the latest news in 3D printing delivered straight to your inbox!