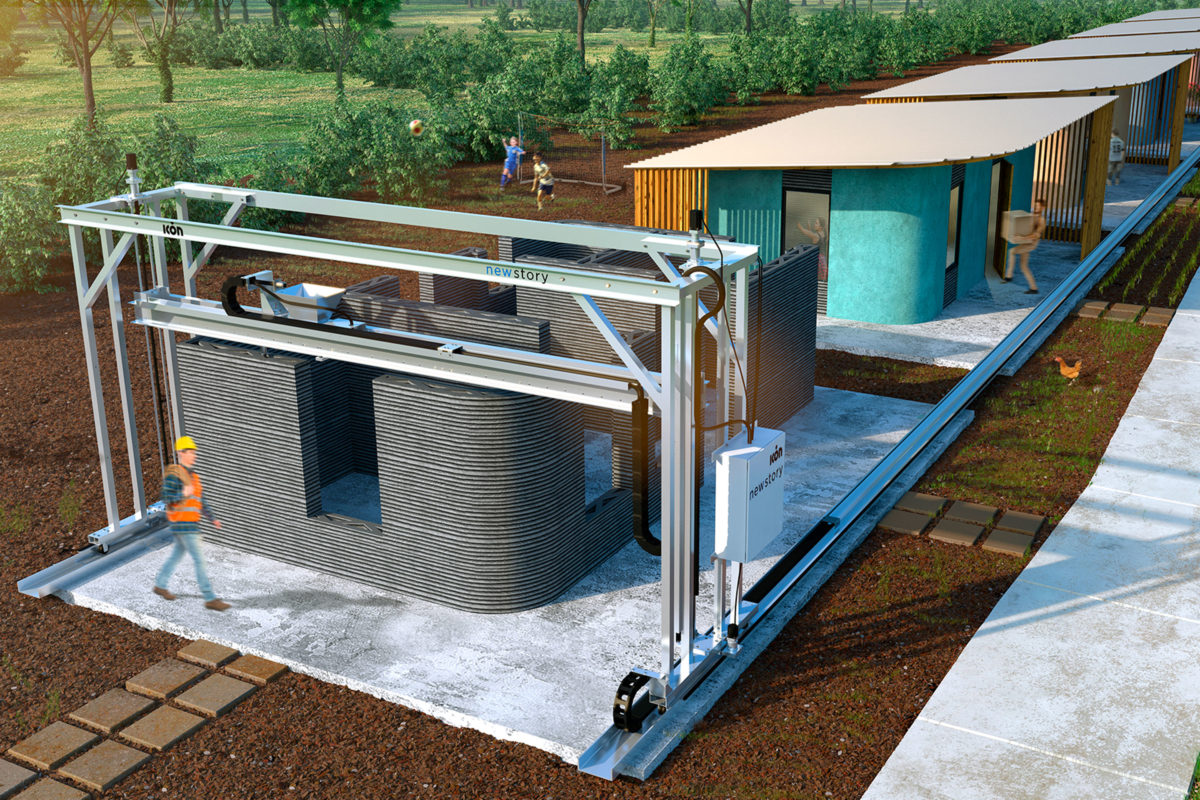 In recent years the role of additive manufacturing in the construction industry has become increasingly important. In particular, concrete 3D printers have been continuously gaining popularity among architects and construction firms. After water, concrete is the most widely used substance in the world. Concrete is a composite material that consists of water, cementitious compound, and aggregate (fine and coarse particles of sand, gravel, crushed stone, and similar substances), all of which exist in abundance. As such concrete is an inexpensive, and thus very popular, material. However, concrete 3D printers themselves are expensive. Machines designed for construction tend to be priced anywhere from around $180k to over $1M. Nonetheless, there are several benefits of using a concrete 3D printer rather than traditional manufacturing methods. It is faster, cheaper, safer, and more efficient. A concrete 3D printer not only produces minimal waste, but also significantly reduces the number of active participants needed on site as well as the length of supply chains. Moreover, using a concrete 3D printer, construction can be completed to a significantly higher degree of resilience and geometric complexity.

A standard concrete 3D printer functions very similarly to a standard FDM printer. This is primarily because both technologies are based on material extrusion. As such their processes strongly resemble each other: first a digital 3D model is created using a 3D modelling software; the model is then sliced and translated into G-Code; the G-Code then guides the printhead which deposits material pumped from a cement mixer in layers until the final piece is produced. A typical concrete 3D printer is designed to additively manufacture parts though material extrusion, consisting of a robotic arm, with one end attached to the printhead, and the other either to a gantry or crane-like robotic arm system.  Depending on the type of concrete 3D printer its design, ability, and process varies. Each has distinct benefits and drawbacks depending on the desired application. The build volume, print-resolution, practicality, and efficiency of a concrete 3D printer will vary depending on its system, technology, manufacturer, and intended applications. 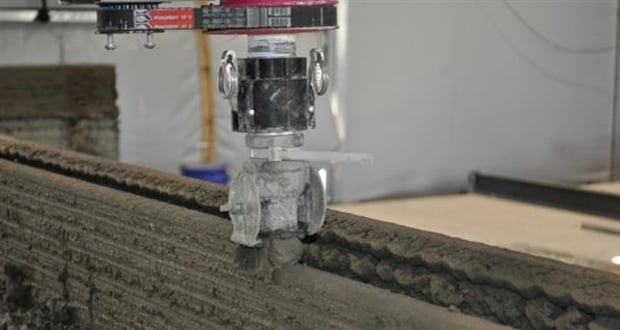 The term gantry comes from the gantry-style overhead structure which supports the printer. While this kind of concrete 3D printer is a popular choice for commercial construction projects, they are rarely used for smaller projects, largely due to the sheer size and associated limited portability, as well as the technical effort required to set up and dismantle them. This type of concrete 3D printer typically operates on a cartesian coordination system consisting of x, y and z axes. These axes are defined by the rails and beams of the supporting structure. The x-axis corresponds to the length of the rails that move the printer forwards and backwards, while the y-axis corresponds to the length of the rail carrying the printhead and connecting the pillars, which in turn are defined by the z-axis and move up and down.

For example, ICON’s 3D printer, the Vulcan II, functions on this basis. With a build volume of 260 x 850 x 260 cm, weighing around 1.7 tonnes, the printer is roughly 2.5 metres tall and 8.5 metres wide. The machine exclusively uses ICON’s proprietary concrete material, Lavacrete. Like most large-scale concrete 3D printers, the Vulcan II itself is expensive, priced at just under $250’000. Despite this, additive manufacturing significantly reduces construction costs, as such many construction companies will opt to hire the machine instead. In 2019, ICON’s printer successfully built a house for under $4000, in just 24 hours. 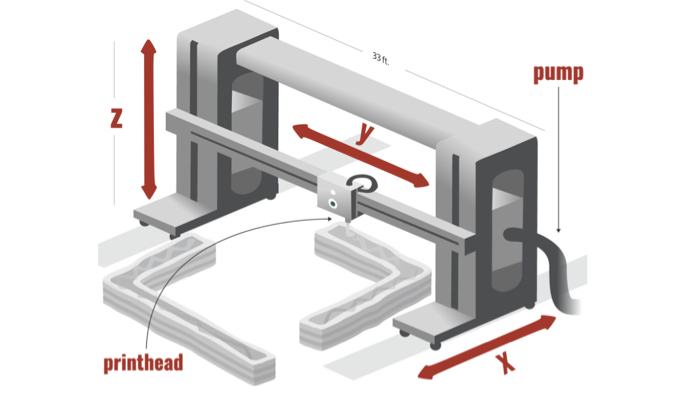 A mechanised or robotic arm concrete 3D printer is supported by a crane-like structure and typically operates on 6 axes. This means that it is possible to create more complex geometries and higher resolution parts than is possible with a gantry-based machine. This type of 3D printer also has the added benefit of increased portability and compactness and is thus easier to both set up and take down. Historically these have had limited build volumes and were thus restricted to constructing smaller parts, recent advances have enabled the development machines with larger build volumes, rivalling that of gantry printers. Robotic arm printers tend to be more expensive than those with gantry systems.

Russian startup, Apis Cor made headlines in 2018 after managing to build a 400-square-foot-home being built from scratch using their proprietary robotic arm concrete 3D printer. The project was completed in just 24 hours in Moscow and cost just $10,000. Two years later the company made headlines again after successfully constructing the world’s largest 3D printed building in Dubai with their proprietary additive manufacturing technology.

Despite the common misconception that a building can be constructed in its entirety by a concrete 3D printer alone, typically only the walls and foundations are additively manufactured. Nonetheless, concrete 3D printing has had an enormous impact on the construction industry. Over the last decade in particular, several construction companies specialising in additively manufacturing concrete have emerged. The Danish company, COBOD constructed Germany’s first ever 3D printed residential building using their BOD2 gantry-style concrete 3D printer, and have since announced a three-story residential building project, that has already begun construction and will have a surface area of 380 square meters. Concrete 3D printers have been used to construct housing in several countries across the world including Germany, Belgium, Dubai, Morocco, and France, as well as an office in Denmark. 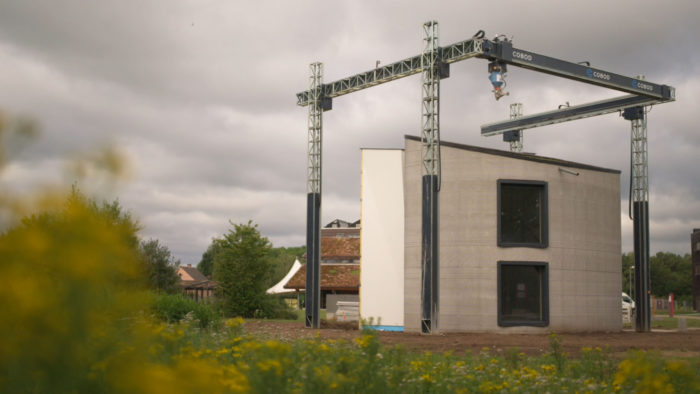 The rapid development concrete 3D printing technology has led to several impressive innovations. For instance, Twente Additive Manufacturing (TAM) has combined gantry and robotic arm systems to build a 9-axis printer, comprising the standard 6 axes of a robotic arm concrete 3D printer, as well as the additional elevation, translation and rotational cartesian axes of the gantry system. Several of these advances have globally significant applications to issues such as homelessness and the preservation of natural resources.

What do you think about concrete 3D printers? Let us know in a comment below or on our Facebook and Twitter pages! Sign up for our free weekly Newsletter here, the latest 3D printing news straight to your inbox!