Advancing technology in additive manufacturing has led to 3D printers becoming more accessible to the masses. Once only available to industrial manufacturers, you can now buy desktop 3D printers for under $1,000. These printers may not have the quality of expensive printers (and only print plastics, rather than metals), but are perfect for a beginner or consumer. Most are FDM 3D printers, as it is the most affordable technology, but you will also find an SLA machine in our listing. We made a list of the 15 best cheap 3D printers available on the market today.

These machines are affordable, but still offer good quality 3D prints and a decent sized print volume for the low cost. The cheap 3D printers we have selected range from under $200 and up to fit your budget. Check out the list below for the full ranking of the best cheap 3D printers delivered in 2020, and you can further view our other rankings if you are looking for something more specific to other areas.

The Anet A8 is an open-source 3D printer developed by the Chinese Shenzhen Anet Technology which offers a print volume of 220 x 220 x 240 mm and an accuracy of 0.1 mm. The machine is delivered as a kit at home, with a mounting that, according to the manufacturer, does not require any particular knowledge or experience. Its LCD screen and five buttons make it easy to adjust. The FDM 3D printer is compatible with materials such as PLA and ABS thanks to a heating plate that can go up to 100 ° C. This is one of this year’s most popular models as well on Amazon. It is available at down to $ 169,99 at the moment. 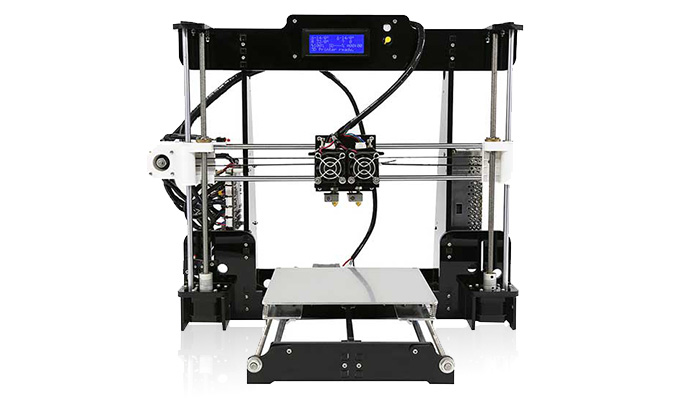 3D printers using SLA technology are usually priced higher than FDM printers. However, the Chinese manufacturer Anycubic has opted for the launch of low-cost resin printers. This is the case of the Photon Zero, an SLA machine with build volume of 97 x 54 x 150 mm and a layer resolution of 10 microns. In addition, its new UV module allows a more uniform distribution of UV light, providing higher quality prints. Its cooling system also guarantees a more stable print performance. Without a doubt Anycubic’s technology provides professional results at the affordable price of $169. 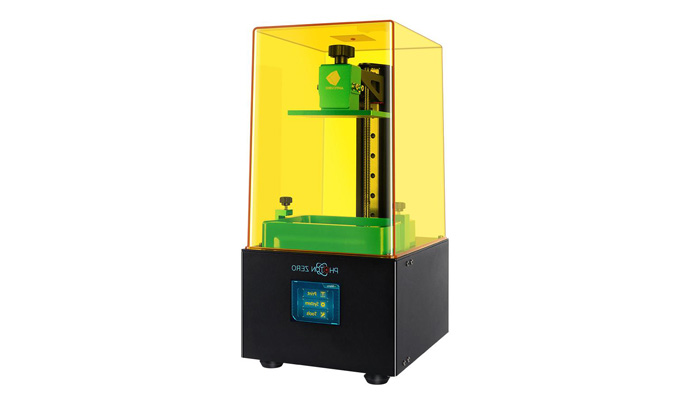 A brand we can’t avoid when talking about the cheapest 3D printers on the market is undoubtedly the Asian company XYZprinting. With a range of more than 20 3D printers, we have chosen to highlight the Da Vinci Mini w + for you.

The Da Vinci Mini w+ with its clean and elegant design, has a printing volume of 150 x 150 x 150 mm and a layer resolution of 100 microns. On top of this it has a WiFi connection and streamlines its printing through a single-button printer design while also providing multi-coloured LEDs to indicate printing conditions, which facilitates the manufacturing process. You can currently find the 3D printer for down to $ 169.95. 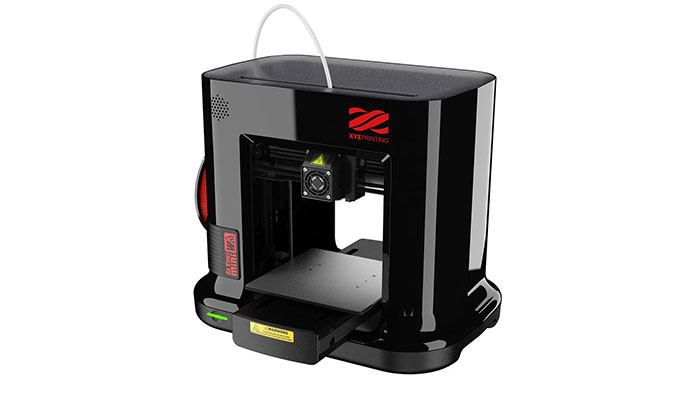 The MP Select Mini V2 from Monoprice is an affordable machine that comes fully assembled and already calibrated at the factory. Based on FDM technology, the heated build plate and wide range of extruder temperatures allow this 3D printer to work with a wide-range of filaments such as ABS, PLA, wood composites, dissolvable PVA, etc. It has a build volume of 120 x 120 x 120 mm and a resolution of 100-300 microns. For less than $200, the Californian company has ensured each user gets a sample of PLA filament and a MicroSD card with preinstalled models to start 3D printing as soon as the printer is out of the box. 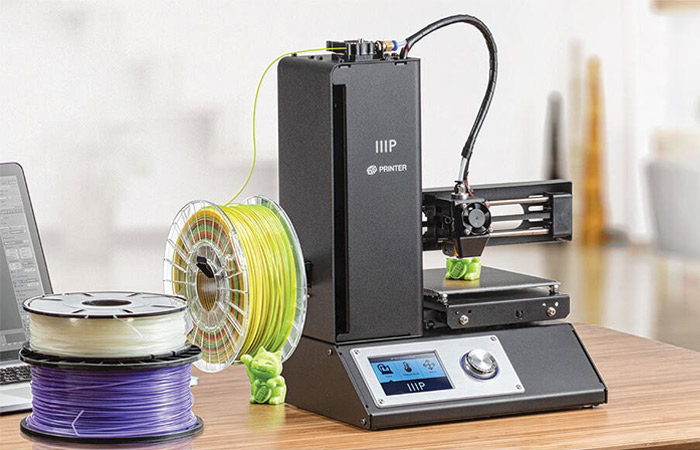 The Creality Ender 3 has a build volume of 220 x 220 x 250 mm, offering almost twice as much space as its predecessor (the Creality Ender 2), yet is compact with a machine size of 440 x 410 x 465 mm. The printer uses FDM technology and is characterized by its special filament feed, which is designed to make printing much easier. The Ender 3 is supplied as a pre-assembled kit, which means that you have to be active yourself regarding its construction. But don’t worry – the appropriate tools are supplied directly!

Also included are extruder nozzles, an extruder cleaner and a sample filament, so you can get started right away. The heating plate needs only 5 minutes to reach the maximum temperature of 110 degrees. The printer is available for $229. If you need more space, you can invest in the latest model, the Ender 5 pro. This one has a larger build plate of 220 x 220 x 300 m. 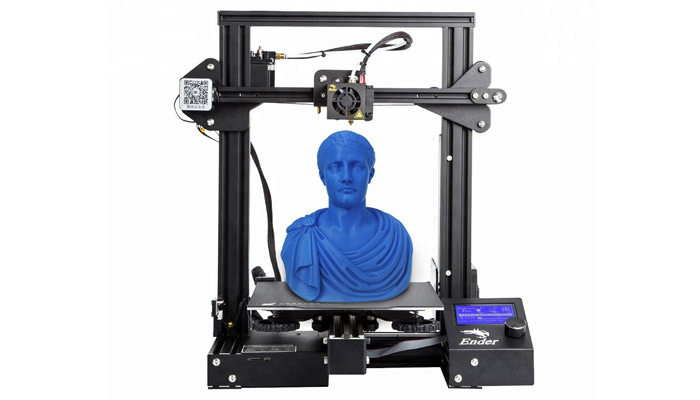 The CR-10 V2 was created by Chinese manufacturer Creality, and is a revamp of the CR-10. It has a print volume of 300 x 300 x 400 mm and a nozzle of 0.4 mm that can easily be replaced by a 0.3 or 0.2 mm nozzle. The 3D printer can print with a variety of materials such as ABS, PLA and wood. It includes 7 enhancements to the CR-10 such as cooling fans, a 350W power supply, end of filament sensor and more. It works with Cura and Simplify3D’s software. The Creality CR-10 has a starting price of $499. 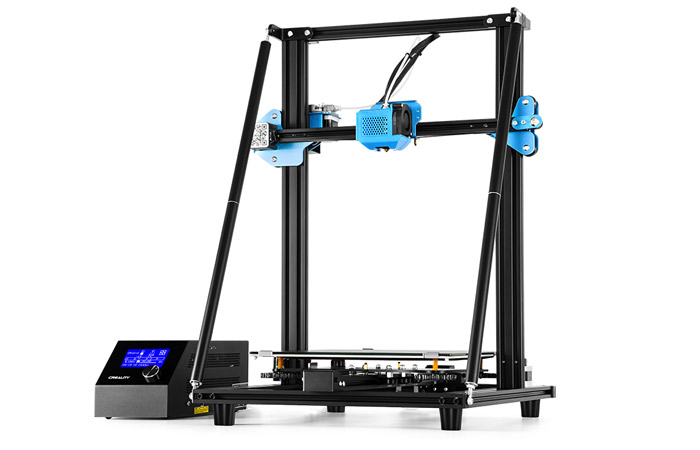 The Plug & Play printer M3D micro is an ultra-compact machine. It weighs only one kilogram for a volume of 20 cubic centimeters. Do to its size it offers a limited print volume of 109 x 113 x 116 mm for a minimum layer thickness of 50 microns. It has a filament compartment under its heating plate for quick and easy reel and automatic calibration. Available in many colours, it can be used at home, the office or at school.The M3D Micro retails for $299 and you can find its specs in our comparator. The Duplicator i3 V2.1 3D printer is a machine developed by the Chinese Wanhao. This printer, offered as a kit, is an evolution of its first version, the i3. It is a machine based on the open-source Prusa model, which has a metal frame providing great stability. It has a print volume of 200 x 200 x 180 mm, a layer resolution of 0.1 mm and a heating plate, which offers the possibility to print with more materials. The machine is available on the market from around $ 349.99. Artillery is one of China’s leading manufacturers of low-cost 3D printers that are easy to assemble and handle. Founded in 2018, the company made its name with its first model, the Sidewinder X1. A few years later, it launched the Artillery Genius, a small FDM DIY machine. Offering a build volume of 220 x 220 x 250 mm, the printer is equipped with a heating plate that can reach 130°C, which allows the user to create parts with more materials such as ABS for example.

In fact, Artillery claims that the plate reaches 100°C in just two minutes. The machine incorporates a colour touch screen, a filament end sensor and is renowned for being very quiet during printing. Hard to find a fixed price for this small 3D printer sold on Amazon or AliExpress, but it can be found around $300. Founded in 2009, JCAurora is one of the most recognized Chinese manufacturers of 3D printers. Among its DIY 3D printers, we chose the JCMaker Magic launched in early 2019. It has a printing volume of 220 x 220 x 250 mm and a heating plate that reaches 110°C, which makes it adhere to filaments such as PLA and ABS. Its 0.4mm nozzle allows the use of 1.75mm filaments, reaching an extrusion temperature of 250°C. It is equipped with a monochrome LCD display that shows the status of the printing in real time, which provides an easier user experience. Clearly, the JCMaker Magic is a great bet, not only because of its satisfactory results, but also because of its low cost, which is usually between $260 and $320. 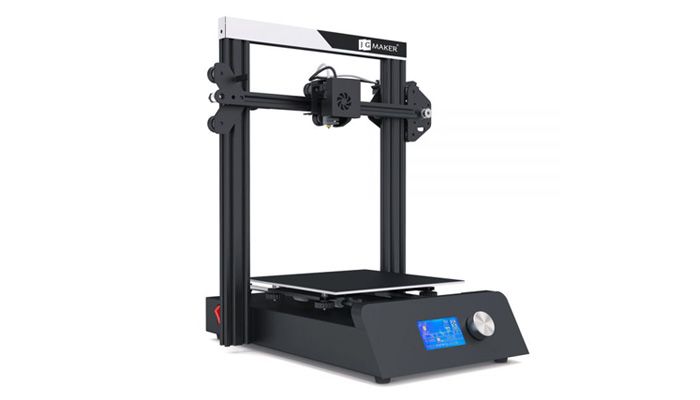 The Neva Magis developed by Dagoma is the latest version of the delta 3D printer kit from the French manufacturer. This printer should be even easier to use than its big sister, ones again with its unique button system that allows you to start, stop and resume printing as you wish. It offers a print volume of 180 x 200 x 200 mm and an accuracy of 50 microns. It always incorporates its end of filament detection system as well as an automatic calibration of the printing plate. More than 50% of the parts of the small office machine are 3D printed. You will find it on the market from 499 € (around $ 567). The Finder 2.0 from Chinese manufacturer FlashForge is made for 3D printing novices and educators. The 3D printer was also designed for children, and includes a removable buildplate for easy cleaning. This FDM printer can create objects with biodegradable PLA, and boasts a build volume of 140 x 140 x 140 mm. It also comes with WiFi connectivity, and automatically detects when filament runs out. The printer has a precision of 50 microns and automatic calibration. It is available from around $500. The Up Mini 2 is the new version of the Up Mini 3D printer from Chinese manufacturer TierTime. This version is more aesthetically pleasing and offers more features like a large LCD touch screen of 10 cm, in addition to a HEPA air filter, Wi-Fi connection, and a mobile app to manage your prints remotely, and an internal memory to save files directly onto your printer. Capable of creating objects with a volume of 120 x 120 x 120 mm and a layer thickness of 0.15 mm, it is available from $ 599. The Prusa i3 is perhaps the most well-known of the RepRap printers. Josef Prusa, the creator of the Prusa i3, claims that he has sold “tens, if not hundreds of thousands of units worldwide.” The printer is constantly under development and improving, with recent revisions including switching from a default extruder to an E3D hotend. The i3 stands for it being the third iteration of Prusa’s adaptations. It also offers a larger print volume than its previous versions, 250 x 210 x 200 mm. It is a proven design, taking advantage of its open source beginnings, the assembled printer is offered for $ 749 or you can create your own for less. The Witbox Go! is designed to bring the technologies of additive manufacturing into households everywhere. It is the first 3D printer with a Qualcomm® SnapdragonTM processor, and uses the Android operating system – allowing the user to print directly from their smartphone. In addition, the printer features improved Wi-Fi connectivity, and state-of-the-art components. In its mission to be a simple printer to use, the Witbox Go! attempts to minimise the user’s settings by automating most of the processes. The Witbox Go! retails for down to € 692.18 (about $786,95). We also tested the Witbox 2 if you want to learn more. Did this list of the best cheap 3D printers help you? Let us know what you think of the cheap 3D printers, are we missing any? leave a comment below or on our Facebook and Twitter pages! Don’t forget to sign up for our free weekly Newsletter, with all the latest news in 3D printing delivered straight to your inbox!

How To Celebrate Easter With 3D Printing