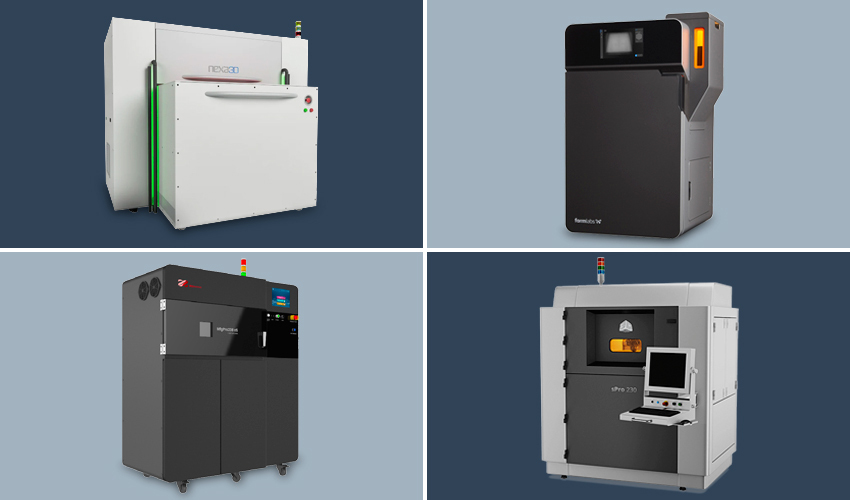 Selective laser sintering – or SLS – technology is based on the fusion of a plastic powder using a laser. Historically, the process was relatively inaccessible because the machines remained expensive and quite hard to comprehend. But in recent years, the market for SLS 3D printers has opened up, with several so-called desktop solutions that facilitate the integration of additive manufacturing. Today, SLS is widely used by the automotive, consumer goods, design and medical industries. More materials have also been developed – like the classic PA11, PA12, TPU or even PP. In any case, the process is prized by many professionals and manufacturers, which is why today, we are taking a closer look at the main SLS 3D printers on the market: Who are the manufacturers behind these solutions and what features do the devices have? The machines, both desktop and industrial, are listed in alphabetical order.

Founded in the United States in 2011, Formlabs develops professional 3D printers at affordable prices. The company became known for its stereolithography solutions, but since 2017 it has announced its entry into the powder sintering market, which it made a reality in early 2021 with the launch of the SLS Fuse 1 3D printer. This machine is capable of printing nylon (PA12 and PA11) parts with a minimum layer thickness of 0.1 mm and a maximum print volume of 165 x 165 x 320 mm. With a relatively low price, it offers users the possibility to manufacture and produce prototypes within their own company. Since this initial successful launch, Formlabs has announced a second SLS 3D printer, the Fuse 1+ 30W, which is intended to be faster but also compatible with carbon fiber-filled nylon. 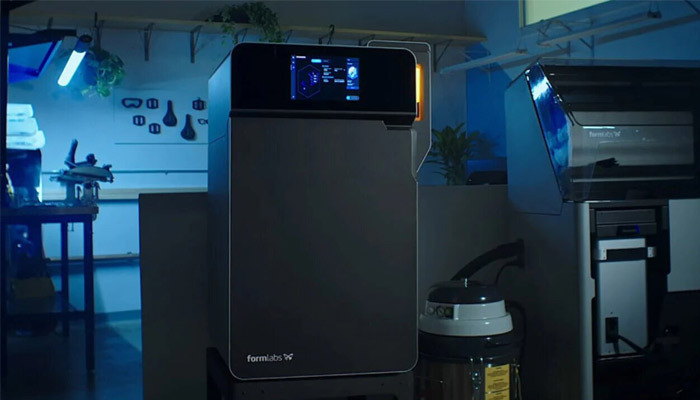 Wematter is a Swedish manufacturer that has developed a desktop SLS 3D printer called Gravity. Thanks to its compact design, it fits perfectly into any working environment and is CE marked for use in an office, laboratory, workshop, or hospital. Gravity offers a print volume of 300 x 300 x 300 mm and a speed of 12 mm per hour. It is equipped with a touch screen and a HEPA air filtration system to guarantee a certain level of safety for the user. The user can also count on optimized management of materials (PA11 and PA12) thanks to a patented system that allows to store and recycle the powder directly inside the machine. Finally, you should know that this 3D SLS printer can be accompanied by a complementary machine, Atmosphere, which controls the interior of the printing chamber in order to improve the final properties of the parts. 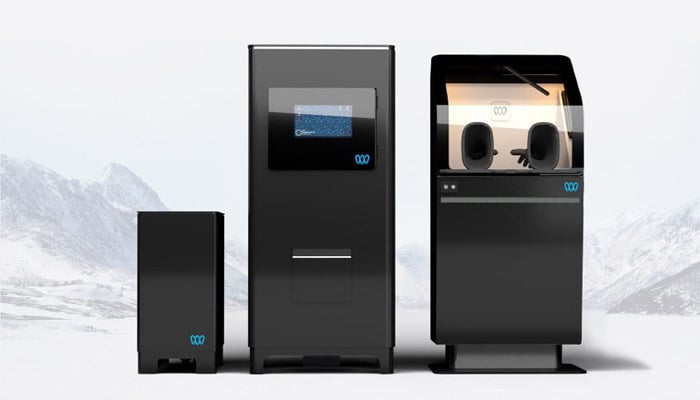 Sinterit is a company founded in Poland in 2014, which is specialized in the development of SLS 3D printers. In 2015, the company introduced its first desktop solution with SLS technology called Lisa. In the new and updated version of the printer, Lisa Pro, Sinterit added new features. It incorporates a new nitrogen atmosphere system in the chamber, which prevents oxidation in the printing process and thus improves the quality of the printed parts. In terms of materials, it offers compatibility with two polyamides, four elastomers, and polypropylene, in addition to PA12 Smooth and PA11 Onyx. It uses a 5W diode laser and its printing volume is 73% higher, reaching 150 x 200 x 260 mm. Besides that, it features Sinterit Studio: An integrated software that helps the user with the printing process. This printer model is perfect for the most demanding users who need higher print volumes or nitrogen atmosphere. 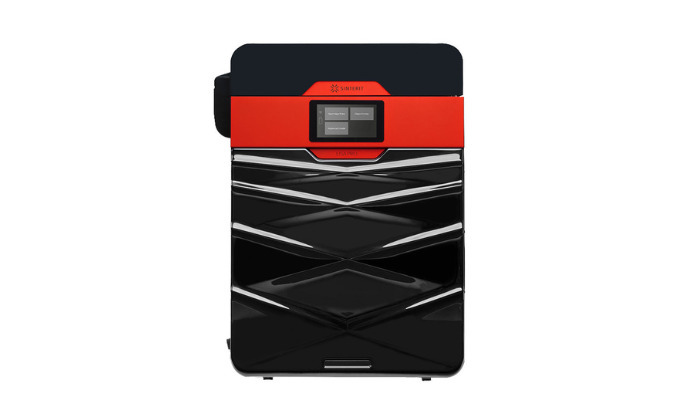 Sintratec is the leading manufacturer of 3D printers in Switzerland and is specialized in the development and production of SLS 3D printers. The Sintratec S2 features automated processes and 3 modules: the laser sintering station (LSS), which consists of 8 heating zones allowing for high-quality surface finishing, the material core unit (MCU), and the material handling station (MHS). It also has an integrated 4K camera for remote 3D printing observation and a large touch screen for intuitive control of the printing process. The maximum print volume is 160 x 160 x 400 mm and it is compatible with materials such as PA12 and TPE. This all-in-one solution by Sintratec reduces downtime and allows for quick material changes and cleaning. 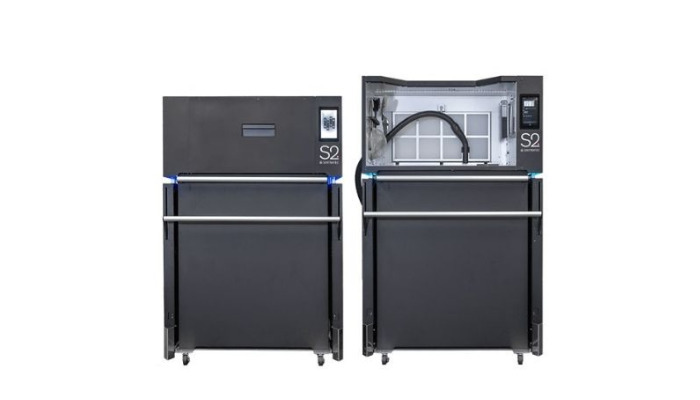 SnowWhite 2 is a professional 3D printer that uses laser sintering technology, aiming the laser automatically at points in space and binding the material together to create a high resistance solid structure. Released in summer 2020, this machine was developed by an Italian manufacturer Sharebot, and is a new and upgraded version of its SnowWhite 3D printer. Due to its CO₂ laser, SnowWhite 2 can use multiple thermoplastic powders, such as PA12 and TPU, and it also supports special powders loaded with other material particles, like aluminum, glass, or carbon. In addition, SnowWhite2 has an upgraded software interface that includes custom print profiles and open parameters. This SLS machine uses the Simplify3D slicer software, and can be connected via Ethernet. 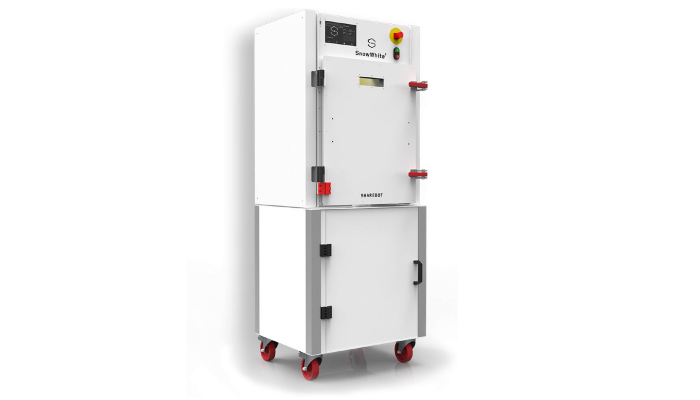 The Farsoon 403P Series is an industrial SLS 3D printer made by Farsoon, a manufacturer based in China. The Farsoon 403P Series offers 4 different configurations: the FS403P, HS403P, SS403P and the HT403P. The four versions have certain different properties, such as the maximum chamber temperature and the 3D volume build rate. The Farsoon 403P Series 3D printers are equipped with an 8-zone heater intelligent temperature control system and high precision embedded 3D scanners for quality 3D prints. This industrial 3D printing solution combines scan speed of up to 15.2 m/s with a high efficiency roller system and convenient removable powder cartridge system, thus offering increased productivity and lower price per part. 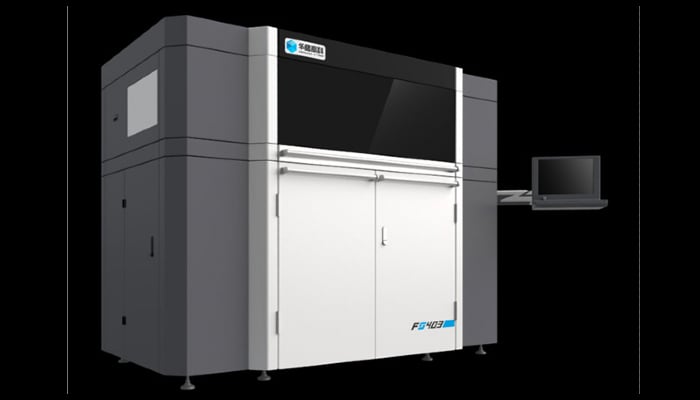 The EP-P3850 was originally released and marketed by Chinese manufacturer Shining 3D, until its subsidiary Eplus3D, which was responsible for creating most of Shining 3D industrial printers, became an independent brand of its own. The EP-3850, already one of the main SLS 3D printers under the former brand, is a multifunctional SLS 3D printer for a variety of purposes. The machine uses a laser as a power source for sintering materials, which include nylon, polypropylene or TPU, among others. The device features an integrated, removable forming cylinder to increase manufacturing efficiency while reducing waiting time. The machine is compatible with Windows 7 operating system; its maximum construction volume is 380x380x500 mm and has a layer thickness between 0.08 and 0.3 mm. The EP-P3850 is a 3D printer very suitable for many applications, including the automotive industry. 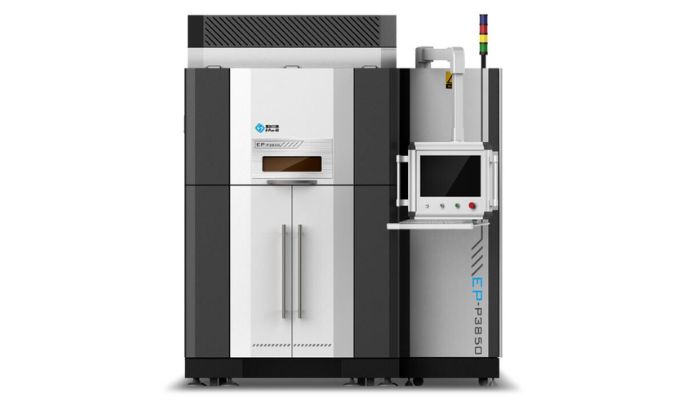 Until a few years ago, Asian manufacturer XYZPrinting focused mainly on the development of machines based on FDM technology. In 2017, it turned its activity around and decided to open up to the industrial additive manufacturing market, thus launching its MfgPro product range, based on powder bed technologies. From that product range, we highlight the MfgPro236 xS 3D printer, an industrial solution aimed at aerospace and automotive professionals, and anyone else requiring advanced prototyping. With a maximum manufacturing volume of 230 x 230 x 250 mm, this SLS 3D printer weighs 425kg and is compatible with XYZprint AM and Buildware software. On the technical side, the machine integrates an internal gas control system and a 60W CO2 fusion laser. In short, it is ideal for those industries seeking to develop end-use parts with high mechanical performance. 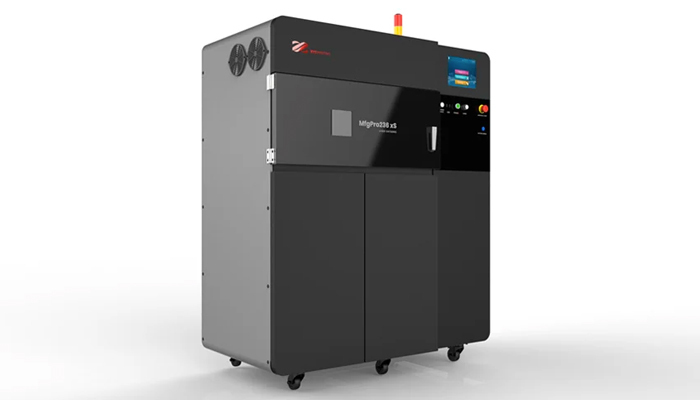 You have almost certainly heard of EOS. The German 3D printer manufacturer has been in the industry for almost 30 years and is a mainstay in industrial 3D printing focusing notably of polymer and metal laser powder bed fusion. Previously, we have highlighted the P500, an SLS industrial 3D Printer that is capable of printing with complex materials such as PEKK and is capable of printing at speeds of up to 0.6m/s. However, with this latest update of our ranking of SLS 3D printers, we want to highlight one of the new machines from the company, the EOS P 810. The EOS P 810 is an SLS 3D printer with a build volume of 700 x 380 x 380 mm (27.6 x 15 x 15 in) that is precise and quick. The printer is designed to create parts out of polyetherketoneketone (PEKK) filled with carbon fiber, HT-23. The combination of one of the strongest polymers along with 23% Carbon Fiber, allows for parts with an excellent strength and low weight that are able to withstand high temperatures. Not to mention, the material is flame-retardant and UV-resistant and meets both aerospace (FAR 25.853) and mobility (EN 45545) standards. The company claims that the machine is the first 3D printing system that can be used for series production of demanding composite parts. 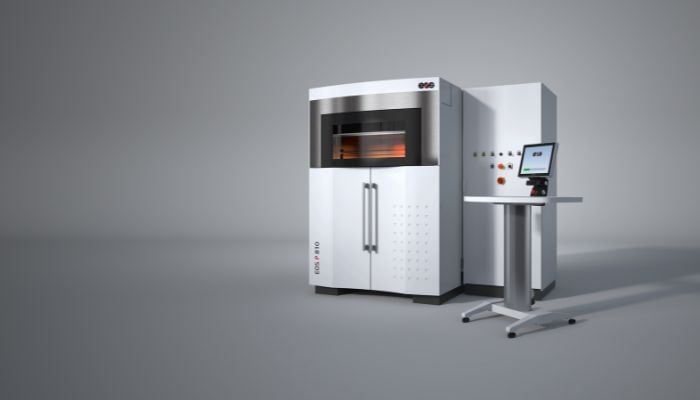 The ProMaker P1000 S is an industrial 3D printer based on laser powder sintering technology. It was developed by the French manufacturer PRODWAYS, which specializes in industrial and professional 3D printing. The large build platform and a maximum speed of 1.4 l/h of the ProMaker P1000 S allow mass production of parts at an affordable cost. The printer is therefore ideal for entry-level industrial production using SLS technology, as it offers the lowest price-to-volume ratio in its class. It is also equipped with a Raylase brand scanner and a high-quality 30 W laser and has a so-called “slicing on the fly” function that allows production to be changed at any time. 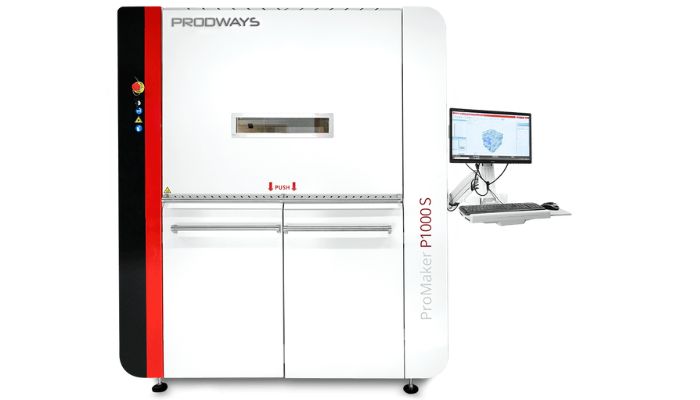 The QLS- 3D printer series was originally created by NXT factory, which developed the innovative Quantum Laser Sintering (QLS) technology. When California-based NEXA3D took over NXT Factory, it continued the high-quality series, of which the QLS 820 is the most prolific device. The 820 relies on the QLS technology, which allows it to additively manufacture polymer parts very quickly. According to the manufacturer, this system is 4x faster than other SLS technologies, printing at a speed of 4200 cubic cm per hour, and offering a build volume of 350 x 350 x 400 mm. Additionally, the Z resolution on this system is 50-200 microns. Developed to compete with injection molding technologies, this system can work with engineering plastics such as nylon or PC and operate 24/7 thanks to its fully automated capabilities. 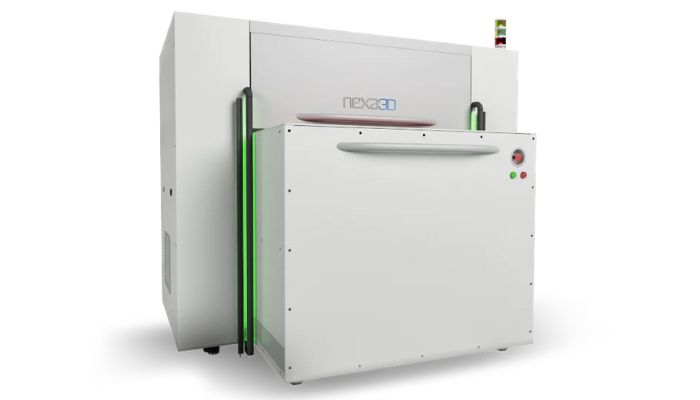 The Sindoh S100 is a fully open and flexible polymer laser sintering system that offers ease of operation and maintenance, as well as offered material packages and remote maintenance features. The printer is the first commercially available machine to feature Materialise’s latest innovative process technology, Bluesint PA12. Using this technology, almost 100% of the powder can be reused to produce new parts, which is not possible with most other printers. As a result, the Sindoh S100 dramatically increases the resource efficiency of laser sintering. 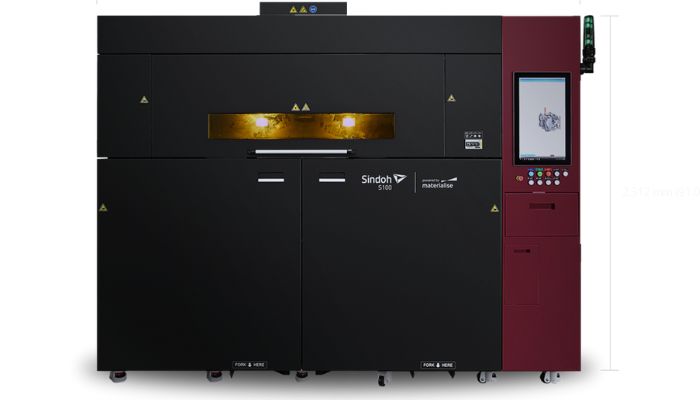 As you can imagine, American 3D printing giant 3D Systems has multiple SLS 3D printers available through its ProX and sPro lines. For this updated list of SLS 3D printers for 2022, we want to turn your attention specifically to the sPro 230. This large capacity SLS printer has been designed for the production of tough and durable thermoplastic parts. The machine is compatible with both durable nylon and composite materials such as nylon 11 and 12. With a build volume of 550 x 550 x 750 mm, users would be able to make both large parts in one piece (up to 30 in/750 mm long) or produce 3D printed small to medium-size parts in volume. Additionally, the machine has a number of exciting features such as automated 3D part nesting. 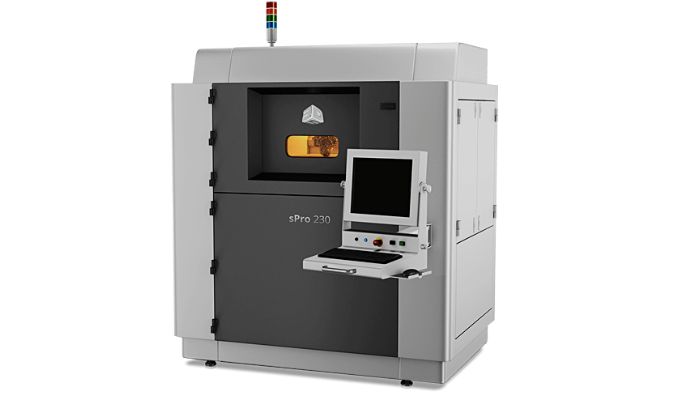 What do you think of our selection of SLS 3D printers? Let us know in a comment below or on our LinkedIn, Facebook, and Twitter pages! Don’t forget to sign up for our free weekly Newsletter here, the latest 3D printing news straight to your inbox! You can also find all our videos on our YouTube channel.