All You Need to Know About Carbon Fiber for 3D Printing

Produced for the first time by Joseph Swan in 1860, carbon fiber is made of a long chain of carbon atoms bonded together. The chain is usually between 5 to 10 micrometers in diameter and varies in length according to the application. Over the years, carbon fiber has become popular across many sectors because it offers interesting properties, including high stiffness, high tensile strength, low weight, high chemical resistance, high temperature tolerance and low thermal expansion. Pure carbon fiber is actually five-times stronger than steel and twice as stiff, yet lighter. As you can imagine, these characteristics make carbon fibers suitable for applications that rely on a material’s properties to optimize performance, which is particularly the case in sectors such as aerospace, automotive, military or civil engineering for example.

As some of you may already know, carbon fibers are rarely used on their own. They are usually combined with other materials to form what we call a composite material – referred to as carbon fiber reinforced materials in this particular case. These composites are made of a matrix material, usually a polymer – even though it is possible to use non-polymer materials such as ceramics – to which carbon fibers are added. The main benefit is you end up with a stronger, yet lighter plastic with an increased level of stiffness. 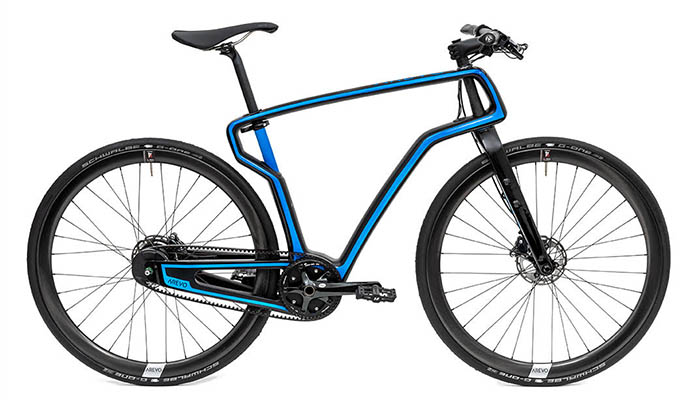 The body of this bike frame has been made with carbon fiber | Credits: Arevo

Traditionally, carbon fiber composites have been used for structural design, where added weight translates into increased lifecycle costs or unsatisfactory performance. Carbon fiber composites can be used to create many products such as bike frames, aircraft wings, propeller blades, car components, etc. As you can imagine, given the many benefits of carbon fiber, it’s no longer just traditional manufacturing systems that are utilizing it. In recent years, a growing number of 3D printing companies have been offering carbon fiber reinforced materials or technologies developed to work with this composite to enable higher performance applications. So how is carbon fiber used in additive manufacturing?

In its 3D Printing Composites 2020 – 2030 report, IDTechEx reveals that the global market for composite 3D printing will reach a value of $1.7 billion by the year 2030. This figure includes other composites such as materials that have been reinforced with glass or plastic fibers. Nevertheless, the trend clearly showcases that the 3D printing industry is increasingly using all composites, including carbon, in its manufacturing activities. In 3D printing, there are essentially two ways of using carbon fiber, the first is carbon fiber reinforced filaments and the second is continuous carbon fiber reinforcement.

Carbon fiber filament uses short carbon fibers, consisting of segments of less than one millimeter in length, which are mixed with a thermoplastic known as the base material. There are a number of popular filaments that can be bought with carbon fiber fill including PLA, PETG, Nylon, ABS, and Polycarbonate. These fibers being extremely strong, they cause the filament to increase in strength and stiffness, and also reduce its overall weight. The 3D printing requirements for carbon fiber filaments should be similar to those of the base material that the carbon fibers were added to. The main difference is that the fibers can clog the nozzles of the 3D printer, therefore experts recommend using a hardened steel nozzle. Additionally, above a certain threshold of fibers, the 3D printed part will lose in surface finish. 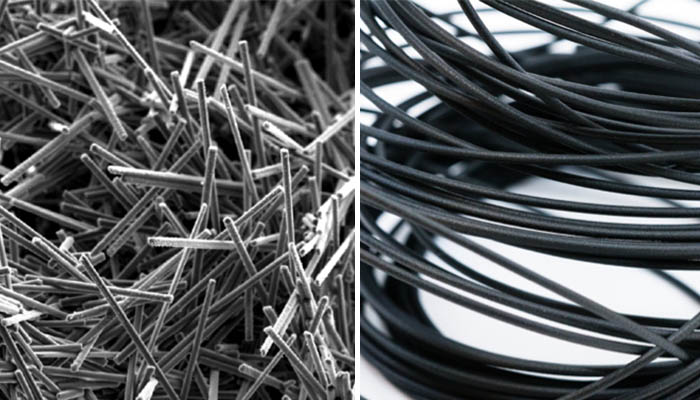 Carbon fiber segments are incorporated into the filament to reinforce it | Credits: Markforged

Some companies have developed carbon fiber filaments for more technical applications. These filaments use as the base material high performance polymers (HPPs) such as PEEK or PEKK. Therefore, they not only offer the benefits of HPPs such as durability and strong mechanical and chemical performance, but also an improved strength-to-weight ratio. The printing parameters need to be adjusted since HPPs rely on extruders that can reach around 400°C, and systems that have heated chambers and build plates. Some of the manufacturers of carbon fiber filaments include Roboze, 3DXTech, ColorFabb, Markforged, Kimya, Intamsys, Zortrax, etc.

Carbon fiber filament is definitely stronger than a filament that has not been reinforced. However, in order to obtain an even stronger part, another technique can be used, called continuous carbon fiber reinforcement. Since the carbon fiber is not chopped up into smaller pieces, it retains much more of its strength. In fact, continuous carbon fiber 3D printing is strong enough to replace aluminium at half the weight. 3D printer manufacturers claim that it can replace metal 3D printing for some applications – the main advantage being it is cheaper than metal. Finally, by placing the carbon fiber according to DfAM techniques, it is possible to add even more strength to a part whilst reducing material use. There are a few actors on the market that offer technologies that can print carbon fibers in a continuous way. Actors can be divided into two main types, depending on when the carbon fiber is added (it can be added before the 3D printing process or during). When added before, continuous fiber 3D printing is known as prepreg-based, whilst when it is added during extrusion it is known as co-extrusion. In the prepeg technique, you also end up with a composite filament (or tape) but the carbon fibers have not been chopped up, instead they have been impregnated with the polymer thanks to a pultrusion process.

Moving away from the more well-known extrusion process, an interesting technology is AREVO’s proprietary process based on Directed Energy Deposition technology, in which a laser is used to heat the filament and carbon fiber at the same time as a roller compresses the two together. Impossible Objects and EnvisionTEC have also added systems for carbon fiber 3D printing to their range of machines, the technology however differs a bit. They weave in sheets of carbon fiber into a print by using a lamination process. Last but not least, Continuous Composites uses a hybrid technology where the strand of fiber is soaked with resin and then hardened using UV light, similarly to SLA 3D printing. 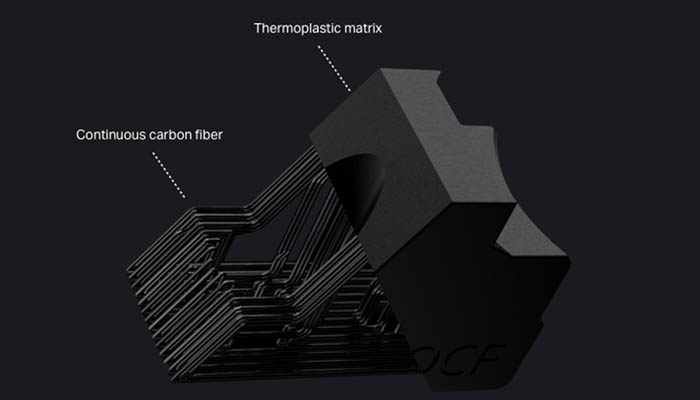 What do you think of carbon fiber 3D printing? Let us know in a comment below or on our Facebook and Twitter pages! Sign up for our free weekly Newsletter, all the latest news in 3D printing straight to your inbox!