The Complete Guide to Stereolithography (SLA) in 3D Printing

Stereolithography (from stereo– Greek for solid, and lithography) is an early method of 3D printing. The first equipment was patented in 1984 by Charles “Chuck” Hull, and the first commercial machine developed by 3D Systems in 1988. But how does it work? What applications can it be used for? Find out the answers here, in our complete guide to stereolithography. For more information, check out our Top 10 resin 3D printers list.

The stereolithography process, also known as SLA (Stereolithography Apparatus), uses photopolymerization to produce 3D models using UV-sensitive resin. This is solidified by the passage of a laser layer after layer. It provides one of the most qualitative printing surfaces of existing 3D printing technologies.

From a historical point of view, Stereolithography is considered the process behind 3D printing. The first patent application was filed in 1984 by Chuck Hull and marketed by 3D Systems in 1988. A few days before the American, a trio of French researchers composed of Jean-Claude André, Olivier de Witte, and Alain le Méhauté filed a similar patent on behalf of the Alcatel group, a patent that has since fallen out of use. 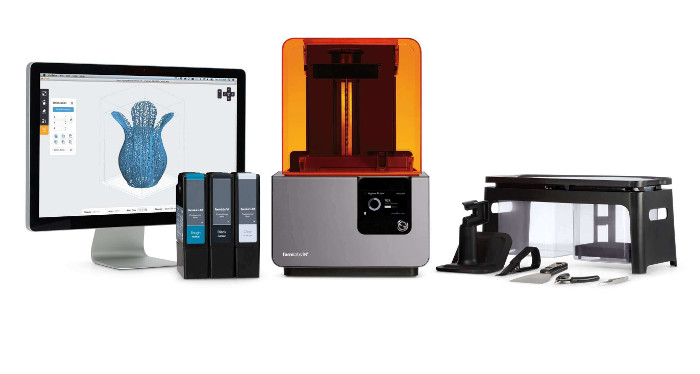 The Form 2 Formlabs, a 3D printer based on SLA technology

3D SLA printers use liquid printing material and a UV protection cover (usually orange, green, red or yellow). Stereolithography offers a relatively small volume of production compared to other printing technologies. However, some machines such as the Mammoth 3D printer can produce parts larger than 2m.

As with any 3D printing technique, a 3D digital file is required. This can be obtained via CAD software (SolidWorks, Sculpt or SelfCAD for example). These files (usually STL files), are to a slicer, which cuts the model into thin layers to print. The instructions are then sent to the 3D printer.

The laser beam sweeps the surface of the liquid resin according to the digital 3D model supplied to the printer. After one layer has been solidified, the platform descends a level. The next section is then solidified. There are as many printing cycles as there are layers necessary to obtain the complete volume of the piece. 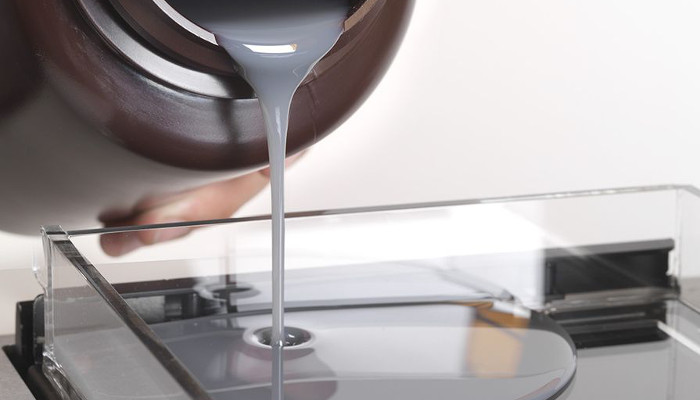 SLA technology uses a material in the form of liquid resin

On some models of SLA machines (like at Formlabs for example), the production of the piece is done in reverse. The platform is instead submerged in the resin tray while the laser acts from bottom to top.

Once the printing is finished, a step of cleaning the room, using a solvent (usually isopropyl alcohol also called isopropanol), is necessary in order to remove the excess non-solidified resin. Unlike other techniques such as Selective Laser Sintering (SLS), Fused Deposition Material (FDM), and PolyJet 3D printing, UV post-treatment is usually required to finalize the photo-polymerization process to maximize the strength of the material.

As with fused deposition technology, SLA uses scaffolds when printing complex shapes. In the manner of a scaffolding, they allow to support the parts that dash in the vacuum. They are removed during post-processing.

Stereolithography technology offers a slightly vitreous surface finish but is generally superior to FDM or SLS processes (for the same layer thickness). It is not uncommon that the different layers of printing are barely visible. However, few colors are available in SLA.

Following the fall of the first patents related to Stereolithography, many actors have worked to improve the technology. The DLP method, which uses a video projector instead of the laser to cover a wider area, with increased print speed, can be cited. The French Prodways has also developed a technique called MovingLight that moves a video projector, to further accelerate the production of parts. The British Photocentric uses an LCD screen as a source of UV light. 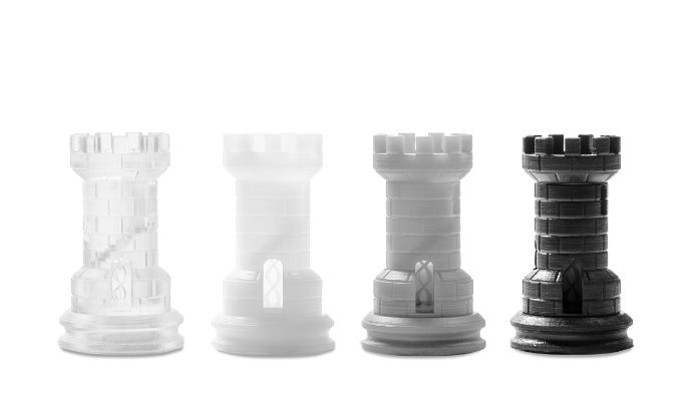 An example of parts made on a 3D SLA printer. Note the glassy appearance.

More recently, the Carbon3D manufacturer has unveiled its CLIP (Continuous Liquid Interface Production) process, which controls the quantity of oxygen during the photo-polymerization reaction. This make the printing speed 25 to 100 times faster. Another interesting initiative, ONO raised $2.3 million for a system using the light of a smartphone to solidify the resin.

Among the leading manufacturers of 3D SLA printers, there are obviously 3D Systems, the origin of the technology, but also newer players such as DWSlab, B9Creator or Formlabs. Based in Boston, the startup Formlabs launched in 2011 a crowdfunding campaign on Kickstarter, raising the pretty sum of $3 million for the Form 1, the first 3D SLA desktop printer. This was marketed under the $5,000 mark.

The price of 3D printers by Stereolithography vary from €1,000 for low-cost versions to several tens of thousands of euros for professional machines with a large manufacturing volume. Find out more in our selection of 3D resin printers in our Comparator.

SLA is more often used for prototyping in all areas of the industry because of its speed, but depending on the quality of the printer, it is also possible to obtain parts that are immediately functional. SLA is also used for the production of injection molds or foundries, particularly in the world of jewellery and dentistry.

Lost wax casting is an example of an indirect manufacturing process using stereolithography. This millenary technique now rests on the 3D printing an accurate replica of the final model (also called jewelery master) in a calcinable wax. Once printed, it is wrapped in a refractory material, creating the mold. A molten metal is then poured into the mold. The metal part can then be used after being removed from the mold.

Let us know what you think in a comment or on our Facebook and Twitter pages! Don’t forget to sign up for our free weekly Newsletter, with all the latest news in 3D printing delivered straight to your inbox!