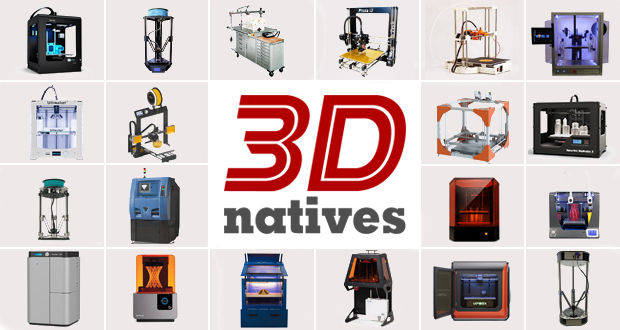 The 3Dnatives Comparator lists hundreds of 3D printers that range from Desktop and RepRap/kit printers to professional and industrial ones. Our Comparator includes a range of models that are based on various processes such as filament filtration and powder sintering, to stereolithography and powder binding. Thanks to our unique tool, you can compare any 3D printer on performance and price.

While 3Dnatives may test the many 3D printers on the market today, we still knew that we needed to design something that would help to simplify the process of buying a new 3D printer. Today, we have done just this with our Comparator, which has grown to become an integral and important tool that we offer our community! Because our Comparator is so widely used, we were curious to see the trends behind the searches by users like you, to answer a simple question: What are the most popular 3D printers on our Comparator?

To answer this question, we present you with our first biannual report, providing an overview of the most viewed 3D printers in the 3Dnatives Comparator. In this first report, you will find the most popular 3D printers from January to June 2017, based on data collected from our 3Dnatives websites.

In our first category, we focus on models of 3D Plug & Play printers (already assembled) marketed for a price that is under $5000. In first place on our list, we find the M200 by Polish manufacturer Zortrax. Although this printer first launched in 2014, the M200 remains a popular model thanks to its print quality (minimum layer of thickness of 90 microns), its heating plate, and its price of only $1,990.

Following, we have two open source 3D printers, the Prusa i3 Rework by eMotion Tech in second place, which is available for a price of €550, and in the third place, the Ultimaker 2+, a machine that is characterized by its heating bead, the use of 3mm filament or the possibility of quickly changing the printing nozzles. The Ultimaker 2+ is available starting at a price of $2499.

We would also like to note the presence of two resin printers in our ranking: The Formlabs Form 2, which uses stereolithography, a technique using a laser to solidify the resin, and the Liquid Crystal, which uses an LED screen for the photopolymerization step. 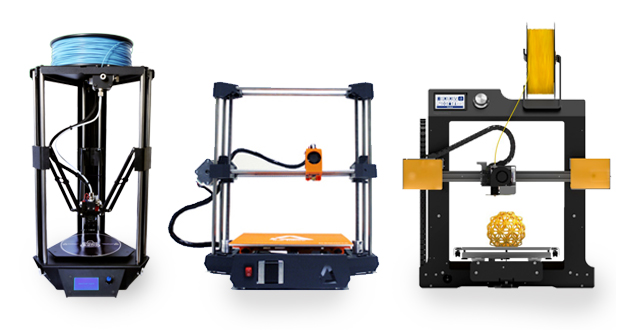 Beginning in the mid-2000s, the RepRap movement has allowed 3D printing to really make a name for itself. The goal of RepRap printers is to create machines capable of self-replicating, resulting in rapid diffusion and reduced prices. The 3D printers that follow this concept usually come in a kit and are open source; an essential element to the reproduction process and to the ability to improve or upgrading them.

Coming in at first place on our Comparator is the Delta Rework Micro from the French manufacturer eMotion Tech. This printer is a delta kit 3D printer with more than 200 pieces to assemble. In second place, we find the famous Discoeasy 200 from Dagoma, available for a price of only €299. In third place is the first generation Hephestos from Spanish company BQ. This printer is an improved version of the Prusa i3 and can be assembled in just a few hours.

In addition to these 3 models, our comparator includes many other kits such as the Rostock Max delta printers, the BCN Technologies BCN3D + or the BQ Hephestos 2, which offers a design based on a more stable metal chassis. In the first quarter,  the Spanish manufacturer has also unveiled its Witbox Go, the first 3D printer based on the Android operating system. 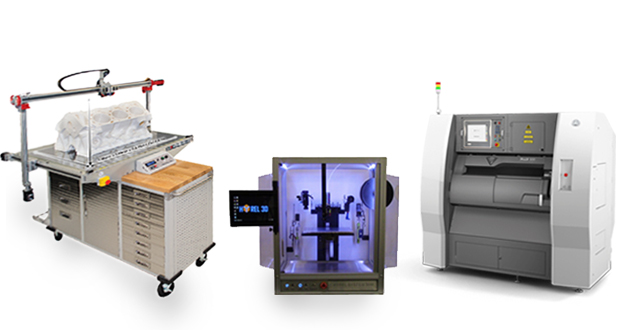 In first place for the professional 3D printer category is the 3D FDM 3DP Workbench, an all-in-one printer with a large print volume. As the name suggests, it has a workbench for all the tools and equipment that are required. In second place is the System 30 M printer from Hyrel 3D. This printer is an FDM 3D printer that can also print with materials such as clay, silicone, modeling clay and even porcelain. In third place is the ProX 300. This 3D Systems printer uses a laser sintering process for the creation of metal parts.

3D Systems has taken a lead in metal 3D printing, with other several manufacturers recently positioning themselves to expand into this market. Some examples of this can be seen with Desktop Metal, Markforged, Israeli Xjet, Michelin alongside AddUp, Swedish Arcam and even German Concept Laser. It is therefore safe to bet that the equipment used to manufacture metal will have the wind in its sail in the months to come.

Which printer is your favorite? Let us know in a comment below or on our Facebook and Twitter pages. Don’t forget to sign up for our free weekly Newsletter, with all the latest news in 3D printing delivered straight to your inbox!