Faster, simpler and more cost-effective is the principle that many companies and organizations in the aerospace sector are pursuing. There is hardly any other sector like aerospace where the requirements and expectations for additively manufactured parts are as high. Probably the greatest challenges for its components include not only extreme loads but also heating and overheating. In particular, the fact that turbine blades move at such a speed that the heat generated by them is higher than that generated by the metal used to make them pushes conventional manufacturing processes to their limits. However, the individual components must not only be able to withstand excessive heat without problems, but also freezing cold. If one considers that the outside temperature in space can quickly drop to over – 200 °C, it quickly becomes clear: the Aersospace sector needs a forward-looking alternative for the manufacturing process. These different extreme conditions must not affect the performance of the parts in any way, as continuous stability and porosity are essential in space travel. The size for catalysts, for example, also plays a major role downstream: if the parts are manufactured too large, it can lead to unnecessary heat loss; if the parts are too small, it can lead to no maximum decomposition of the propellant. The result in both cases is reduced performance and increased cost.

But how can ceramic 3D printing remove these obstacles? Ceramics are known for their properties such as heat resistance, mechanical performance, and also for their use in producing fine components of the highest quality. Additive manufacturing therefore enables the design of complex shapes while reducing costs and lead times – something that is not possible through conventional manufacturing. It can be quickly deduced that ceramic 3D printing is an ideal solution for an industry as demanding as aerospace. Lithoz has quickly positioned itself in this market by developing a silicon nitride (Si3N4) that shines with its optimal properties, such as tremendous strength even at high temperatures, excellent resistance to unexpected temperature changes, and also tremendous hardness. To prove these properties and test the material under extreme conditions, the Austrian company conducted a stress test with a nozzle made of Si3N4 – with excellent results.

The Lithoz team wanted to test the thermal shock resistance of its material using the 3D-printed silicon nitride nozzle. Therefore, they heated it to 900 °C and then immediately cooled it down to room temperature by quenching it with water. Despite the high thermal stress, the 3D-printed nozzle survived the test without any damage. According to Lithoz, the material can even withstand a higher temperature than 900 °C. 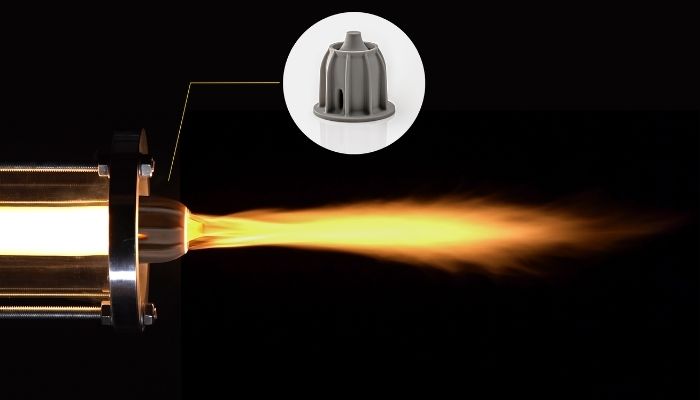 What does this mean for the aerospace industry? Using additive manufacturing and silicon nitride, 3D-printed parts can have a high thermal shock resistance, as well as enormous strength, toughness and the advantage that complex ceramic components can be produced. For example, for the aerospace sector, this allows microturbines, impellers and cutting tools in particular to be produced quickly and accurately and used at temperatures up to 1200 °C, which would be time-consuming and costly in a traditional production process. However, Si3N4 is also widely used in other industries: the medical field benefits from the material especially due to its antibacterial and antiviral surface chemistry, as well as its excellent biocompatibility. Specifically, silicon nitride is particularly suitable for the fields of dentistry, orthopedics and craniomaxillofacial implants. Silicon nitride is also ideal in the fight against coronavirus, as its surface properties make it resistant to viruses and bacteria.

3D Printing on the Moon: Fact or Fiction?

It may sound like something out of the script of a sci-fi movie, but the use of moon dust, or moondust, is already being used via ceramic 3D printing at Lithoz. And it’s easy to wonder whether it could be next step towards human life in space? In any case, one thing is for sure: LCM technology makes it possible for aerospace components to be made from lunar regolith in high-precision dimensions. For future missions to space, this means that the necessary spare parts and tools can be produced on site and on demand.

However, to use these resources from the moon, which is considered to be sufficiently available and non-toxic for humans, by means of ceramic 3D printing, some steps have to be taken into account. Especially the close project work with the European Space Agency (ESA) enables a continuous research and further development of lunar dust with regard to 3D printing. In this regard, research has already been conducted on a solution to replace hydrazine as part of the EU Horizon 2020 project RHEFORM. The substance, which is considered carcinogenic, has played a major role in space travel since the 1960s. By using the CeraFab 7500 3D printer, a DLP (Digital Light Processing)-based additive manufacturing system from Lithoz, as well as its proprietary photocurable binder, which found its application in this project, the researchers were able to make significant progress in terms of improved space applications. In order to explore the further possibilities of Moondust, several projects in which Lithoz is significantly involved are also currently underway. 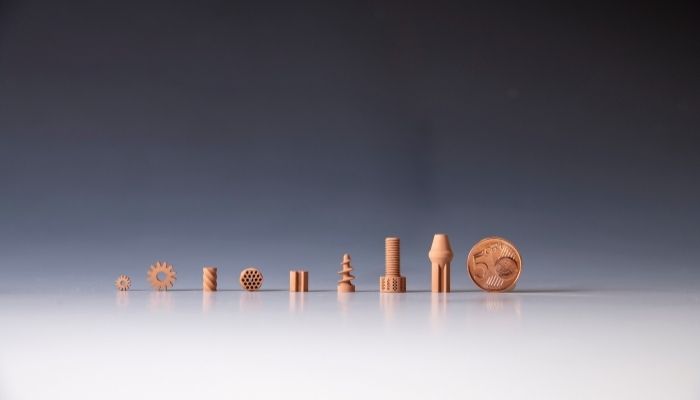 The Production of Lighter Aircraft Turbines Thanks to Lithoz

To enable aircraft to take off in the first place, the turbines are crucial for every flight. One of the most important parts inside the turbine are the turbine blades, which are traditionally manufactured by investment casting. Here, however, a serious problem arises: with conventional injection-molded cores, the possibility of incorporating multi-blade, complex and narrow cooling elements is limited. In the long run, the consequences can not only be costly, but also pose safety risks. How can turbines today be manufactured more efficiently and innovatively without increasing costs? The solution is offered by the proprietary 450, a silica-based material that is ideally suited for the production of cast iron cores using LCM technology. Low thermal expansion and very high porosity make the material ideal for additive manufacturing of precise ceramic cores with intricate details for aerospace applications.

The tool-less manufacturing method through additive manufacturing not only prevents high costs and enormous additional effort, but LCM technology also enables faster production. Accordingly, prototypes and as well as series productions can be made in short time and thus take an obviously shorter time to market. The casting cores can have a fineness of at least 200 µm, even for complex shapes with features such as trailing edges, and can assume a size of up to 30 cm. Using the company’s proprietary CeraFab system, Lithoz even managed to produce several cast cores with a size of 500 mm – something that had not been done before in this form, thus demonstrating forward-looking solutions for the production of prototypes up to large cores for industrial turbines by Lithoz. 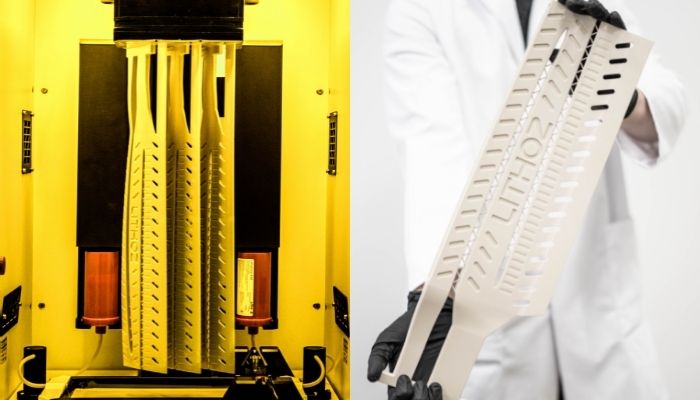 The Latest Materials Developed by Lithoz

While the previous materials are already proven through their years of use, Lithoz adds two more to the selection of ceramic materials. First, Silicon-Infiltrated Silicon Carbide (SiSiC), a lightweight yet hard ceramic material, offers very good thermal conductivity and minimal thermal expansion. In this respect, SiSiC ceramics are often used as heat exchangers, nozzles or as end pieces for different types of burners. On the other hand, aluminum nitride (AIN) is developed using DLP-based manufacturing technology. As with SiSiC, aluminum nitride has high thermal conductivity. On the other hand, the flexural strength of AIN, which could be measured during the research samples, varied between 320 and 498 MPa. In sum, these properties contribute to the fact that thus the production of highly complex and crack-free parts becomes possible and thus creates new application possibilities in the field of thermal management. 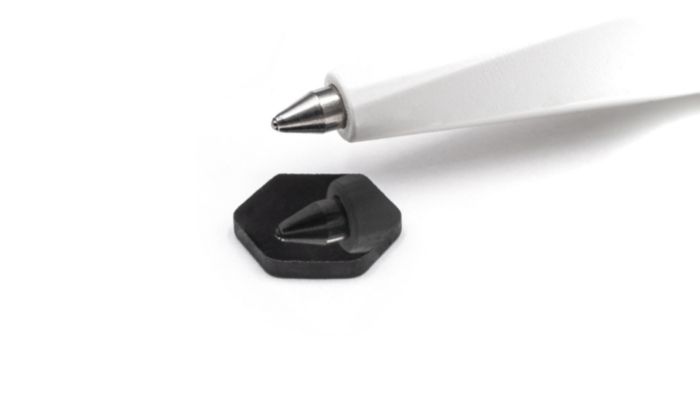 This large and diverse range of different materials and developments illustrates very clearly how far ceramic 3D printing has already advanced in the aerospace sector and what new possibilities it opens up. In addition to the production of components with immensely complex structures, Lithoz and its materials also enable great design freedom, combined with the highest precision. Regardless of whether the 3D-printed part is to be just a few millimeters or half a meter in size, the first-class material quality and the constant, pixel-precise exposure precision that is achieved evenly across the entire build platform when using a CeraFab system mean that even the production of parts for a series production is finally no longer a problem.

What Projects is Lithoz Currently Working on in the Aerospace Sector?

Various projects, in which Lithoz is significantly involved, intensify this even more: together with researchers from the University of Poitiers (France), FOTEC Forschungs- und Technologietransfer GmbH (Austria) and the University of Applied Sciences Wiener Neustadt GmbH (Austria), Lithoz has presented the comparison of printed monolithic ceramic catalysts with traditionally produced catalysts as well as with different washcoat layers. With regard to the decomposition of highly concentrated hydrogen peroxide, it could be noted that especially the factor of porosity makes a big difference in direct comparison. In general, the measured porosity of the printed structure is immensely greater than that of the extruded structure. One of the consequences of this is that with a higher porosity, the transient temperature behavior is also improved. These results can be further crucial steps for the increased use of ceramic 3D printing in aerospace. For more information around Lithoz’ activities, click HERE.

Which Lithoz material do you think adds the most value to the aerospace sector? Let us know in a comment below or on our Linkedin, Facebook, and Twitter pages! Don’t forget to sign up for our free weekly Newsletter here, the latest 3D printing news straight to your inbox! You can also find all our videos on our YouTube channel.