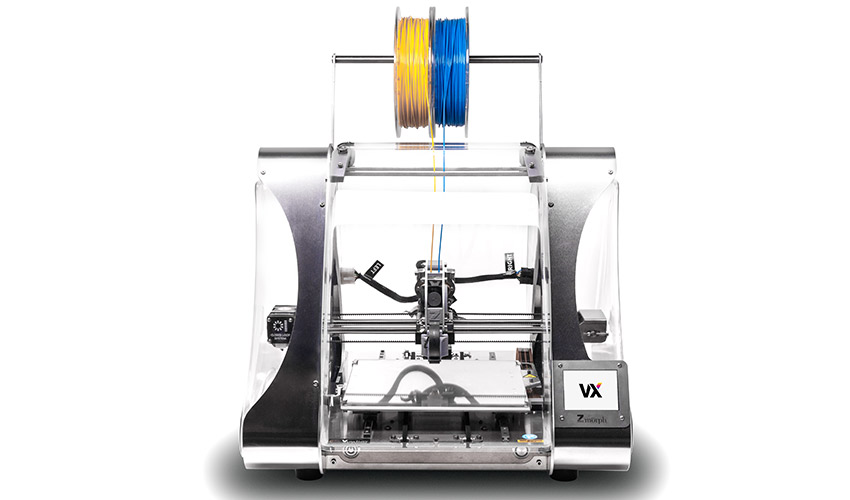 Originally from the RepRap world, the Polish manufacturer ZMorph launched itself on the 3D printer market in 2012. Over the years, the brand has made a name for itself with its multi-functional 3D printers. Its latest model, the ZMorph VX, is no exception to the rule and offers an interchangeable print head system that allows you to combine 3D printing, CNC machining or laser cutting and engraving.

The ZMorph VX 3D printer replaces all the manufacturer’s previous models, namely the ZMorph 2.0, ZMorph 2.0S and ZMorph 2.0 SX. As for its 3D printing capabilities, the VX offers a maximum build volume of 250 x 235 x 165 mm, a minimum layer thickness of 50 microns, as well as a maximum extrusion temperature of 250°C combined with a heating plate that can reach up to 120°C. 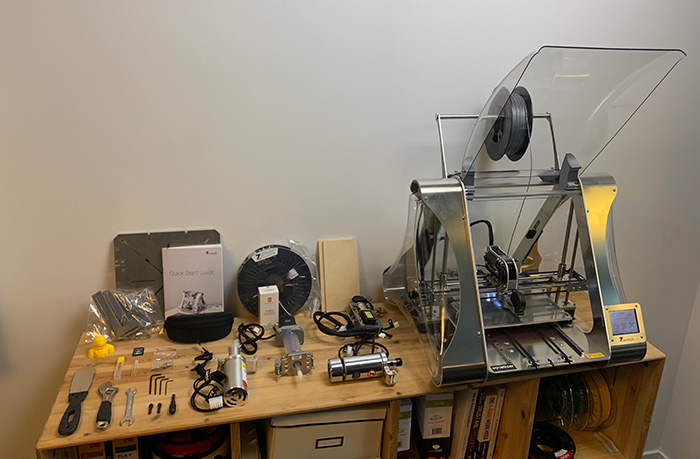 To learn more about this new model, we were pleased to receive the ZMorph VX 3D printer and its complete set, including 5 interchangeable extruders (mono-extrusion, double-extrusion, CNC Pro, Laser Pro, and dough extrusion) and two trays (3D printing, CNC/laser). We tested the machine in 3Dnatives’ Lab and we tell you everything you need to know to make up your mind on this solution below!

With its total dimensions of 530 x 555 x 480 mm, we discovered a relatively large machine that uses the same triangular design as the other models from the same manufacturer. The VX is made of an aluminium and stainless steel frame combined with plexiglass panels that promise a robust machine. Just like other models, we can see several parts that have been 3D printed, such as the fan holder or the door fasteners.

The geometry of the machine, combined with the removable front and rear doors, offers the advantage of increased access and visibility on the production floor. Also, we note the presence of an emergency stop button on the front of the machine, which is as useful for 3D printing as for machining or laser cutting and engraving. Additionally, two handles on either side of the VX make it easier to move the machine. 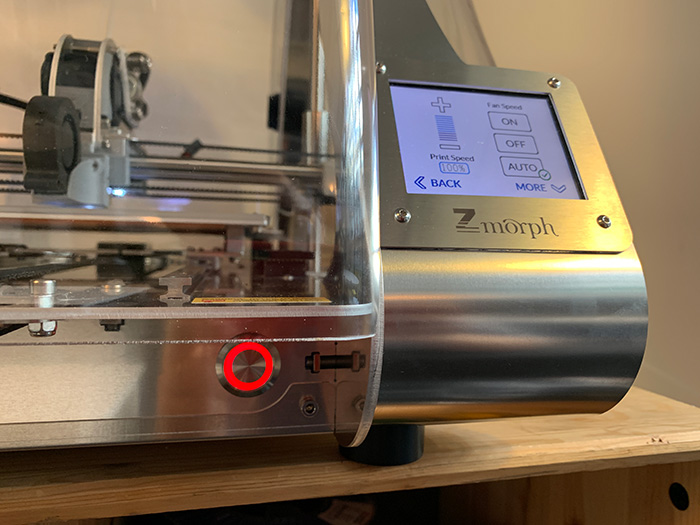 The ZMorph VX’s Complete Set includes, as its name suggests, a very wide range of accessories. There are 5 interchangeable manufacturing heads: 1.75mm mono-extrusion, 1.75mm double-extrusion, CNC machining, laser engraving, and dough extrusion. The only head marketed by ZMorph that is not included in the set is a single-extrusion head with a 3mm nozzle. In addition, the pack includes a glass plate for 3D printing and a plate for machining.

Finally, many accessories complete the set including a spatula, 4 allen keys, an SD card, a Dimafix spray, a 10mm mixed key, a wrench, a calibration cable, a 0.3mm spare nozzle, two 1.75mm PLA coils and a removable fan. For the machining part, the set includes two drills of 0.3mm and 2mm as well as an associated support, two clamps for the machining table, safety glasses and two scrap wood.

To help the user in the operation of the machine, the manufacturer had the good idea of launching an online support called the ZMorph Academy (only available in English). Three levels are offered – basic, intermediate and advanced difficulty – the platform provides a detailed and visual overview of the use of each of the interchangeable extruders.

As we went through the guide, we noticed that some simple contents may still be missing, such as explanations for moving the printing plate to the machining plate. User feedback, combined with regular updates from ZMorph, allow you to quickly overcome any problems. Finally, in the “Use Cases” section of the ZMorph website, you can also be inspired by the many projects combining the different manufacturing processes. 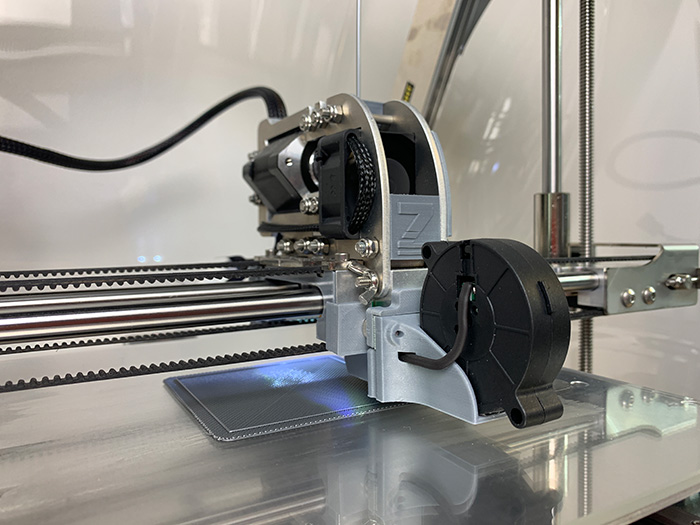 The single-extrusion head of the ZMorph VX. In the foreground, the removable magnetic fan.

The strength of ZMorph’s multi-functional system is the ease with which it is possible to switch from one manufacturing head to another. The operation takes a few seconds and only requires an allen key supplied with the machine. The Left, Right, A and B indicators make it easy to connect the different cables from each head to the machine. This is done via the ZMorph control screen in the “Change Tool” menu.

For the 3D printing part, after adding the single or dual extrusion head, you will need to install the magnetic heating plate and the removable fan (also magnetic) which is placed at the front of the extruder. The filament is placed on top of the printer using the dedicated support. This is not very practical, especially when the machine cover is raised, with coils that tend to move along the support. Filament loading and unloading as well as calibration (manual or automatic) are done directly from the ZMorph control screen.

Although compatible with Cura, Simplify3D or even Slic3r, the Polish manufacturer offers its own file preparation software. Called Voxelizer, the slicer requires to initially choose the manufacturing head before importing in a second time the STL model for 3D printing or the DXF file for machining or laser cutting/engraving.

Once the file has been imported, you will find the classic slicing options with the possibility of creating your own printing profiles. By accessing the advanced settings, many parameters are available such as layer thickness (up to a hundredth of a millimeter), extrusion temperature, infill, media density, etc. After you have clicked on the file, you will then be able to send it to the 3D printer via USB, Ethernet or by saving the Gcode on the SD card. Note also that you will be able to copy your files to the machine’s internal memory.

Concerning the dual extrusion, it is interesting to note the existence of the Mapping mode, which allows to texture the surface of the printed model, as well as an option to mix two colors to obtain a new color or make gradients. 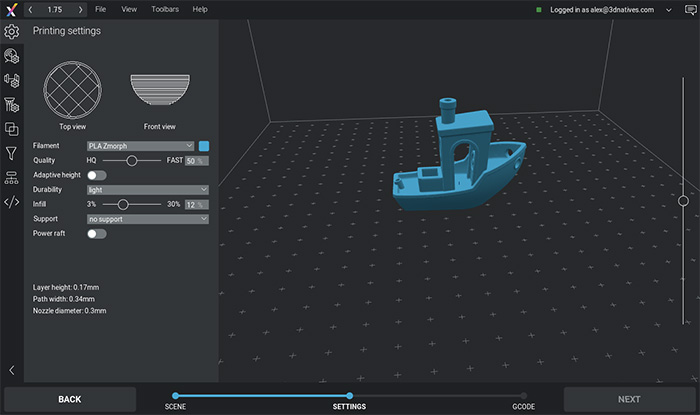 ZMorph3D has developed its own software called Voxelizer

Logically, we started with the single-extrusion head. After our usual torture test, we had fun printing a pyramid file already in the 3D printer’s memory, but also a gear model and a rocket available on the ZMorph Academy platform. In the test, we limited ourselves to 3D printing with PLA only.

No major concerns clouded the tests. However, a tangled filament on the reel resulted in under-extrusion during a print run and a slightly clogged extruder. It was an opportunity to see how easy it was to access the extruder with the tools provided. In less than 10 minutes, the matter was settled and the prints could be resumed.

After this, it was the turn of the dual extruder to be reviewed. The important point for dual extrusion is the correct preparation of the file in Voxelizer. To do this, we took a short tour through the ZMorph Academy, which devotes several chapters to the dual extruder. Nothing very complex, but it’s better not to be wrong. Note that at ZMorph, the dual extrusion is done by a single print head. This is a nozzle that integrates two smaller nozzles that work with each filament. This system involves a purge tower (called Artifact at ZMorph), its geometry can be modified in Voxelizer (a Tower version and a Brim version are available). We let you observe the results below. 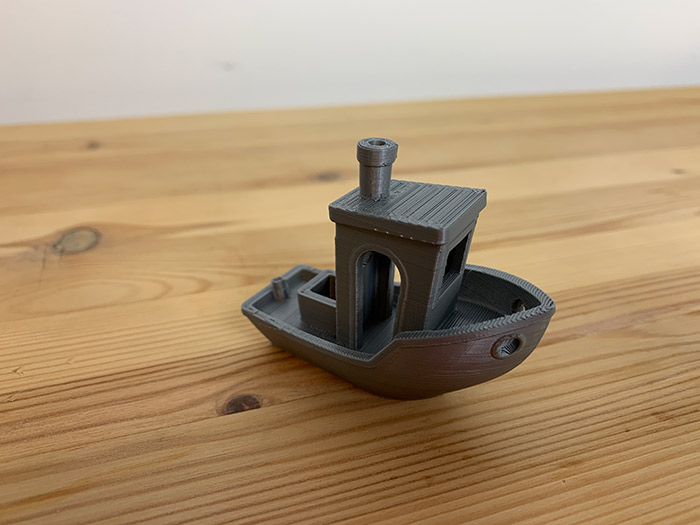 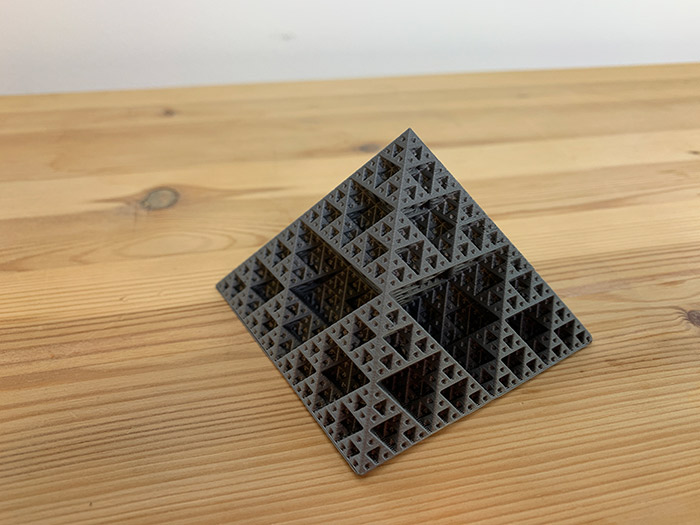 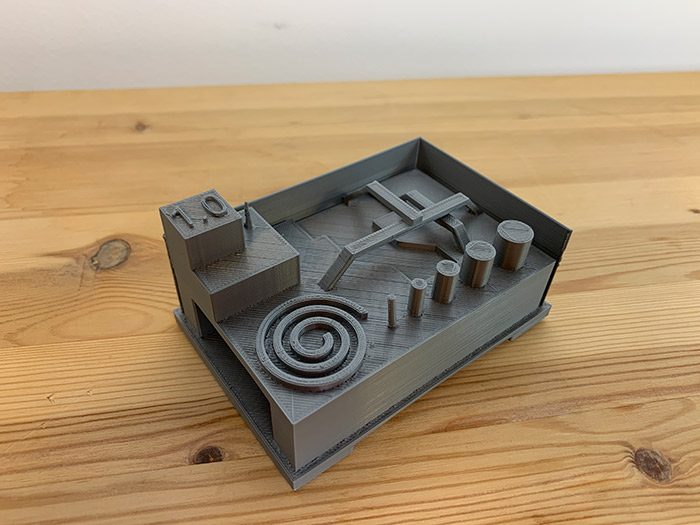 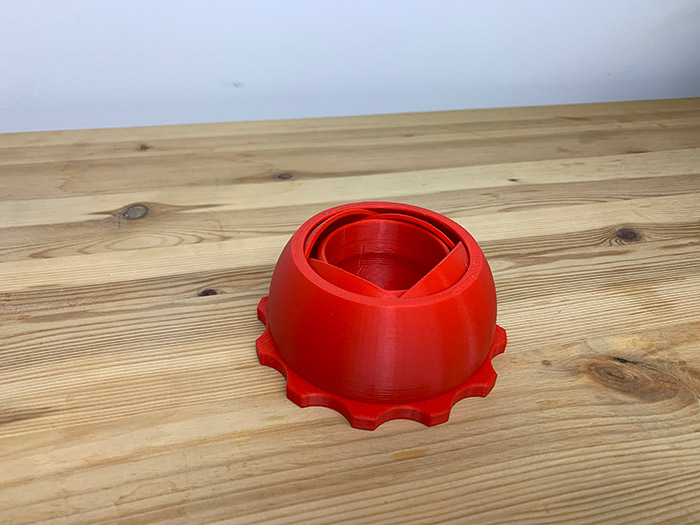 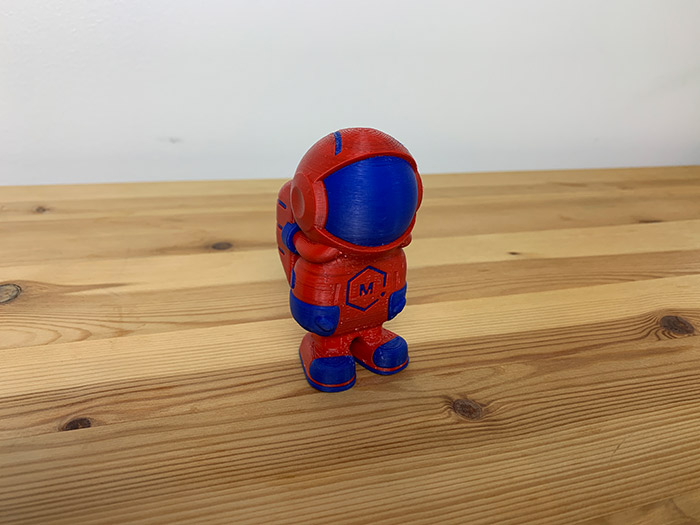 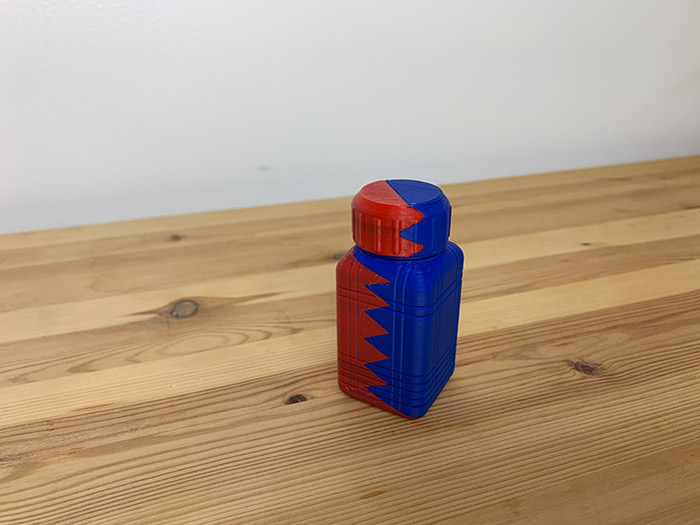 As you will have understood, the ZMorph offers the possibility of using other manufacturing processes thanks to its CNC PRO head and its two integrated drills of 0.3mm and 2mm, but also thanks to its Laser PRO head equipped with a blue laser diode with a power of 2.8W. 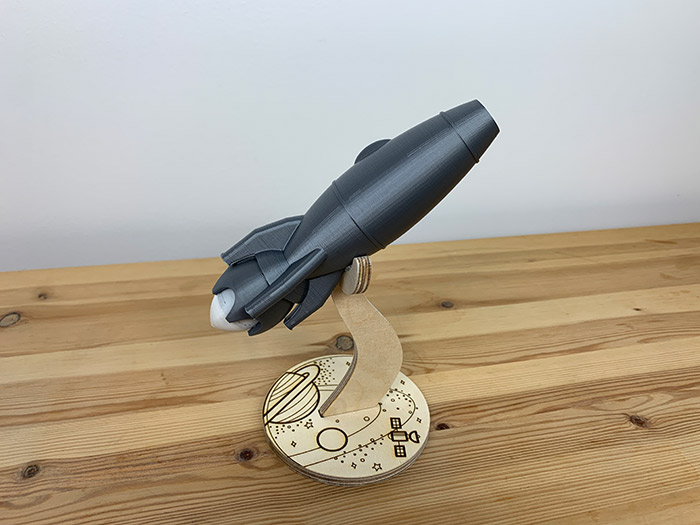 Although our experience in this field is relatively limited, we tried CNC and laser machining by simply following the ZMorph Academy guides. The installation of the CNC PRO and Laser PRO heads is done in a few seconds in the same way as for 3D printing. Once installed, the next step is to select the extruder used in Voxelizer and import its creation. Not having to use a second software for the machining part is a real comfort and time saving.

As part of the test, we embarked on the project proposed within ZMorph Academy, namely a cut and engraved wooden support for a 3D printed rocket. Unlike 3D printing, CNC cutting and laser engraving are very fast, requiring less than 5 minutes of work. No particular difficulty is to be noted, however, the important steps will be to properly calibrate the CNC PRO and Laser PRO heads, prepare the files and ensure that the block of material is properly attached to the plate.

Below, you will find our final score and thoughts on the ZMorph VX
For more 3D printer tests & reviews from 3Dnatives Lab, go to our dedicated page HERE.

Proposing a machine capable of combining 3D printing, CNC machining and laser cutting and engraving is a daring challenge, because if you want to do everything, you run the risk of not doing anything right. In the case of ZMorph, the VX appears to be the result of 7 years of development, sales and user feedback that have enabled the Polish manufacturer to offer a Plug&play solution combining 3 manufacturing processes, all for a price of around $4,400 (depending on the reseller).

As for 3D printing, the quality of the prints is excellent with a software that has nothing to envy to the popular Cura or Simplify3D. With the ZMorph Academy, the brand integrates a successful, yet perfectible, online support that allows the various manufacturing extruders to be quickly taken in hand.

The ZMorph VX is a machine that will exclusively target users (private or professional) looking for an affordable hybrid press that combines 3D printing and CNC/laser machining for a variety of projects. On the other hand, its price may push away users who are only interested in 3D printing, although it should be noted that the dual extrusion system works and offers a real competitive advantage.