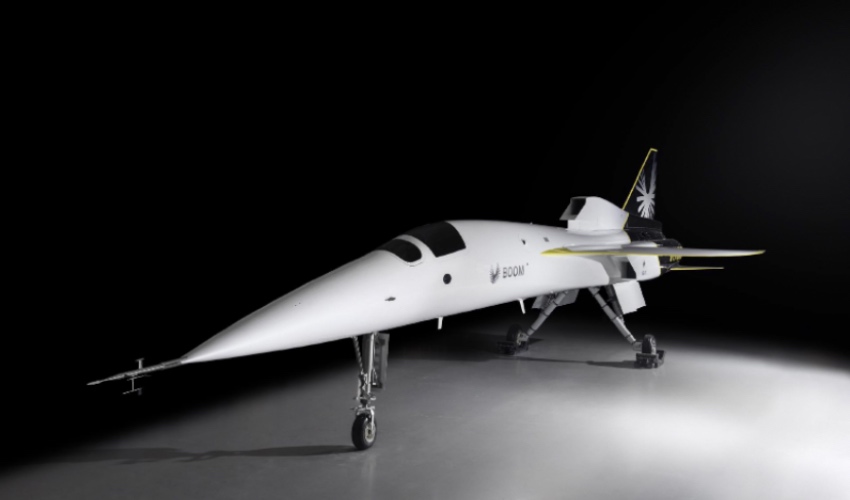 The US-based aerospace manufacturer, Boom Supersonic, rolls out the XB-1 aircraft model. The airplane features 21 titanium 3D printed components produced by the metal AM solution provider VELOD3D. Earlier this year, VELO3D raised $28  million for the product portfolio expansion, bringing the total amount to $138 million. The company’s Sapphire 3D printer is capable of producing incredibly detailed metal 3D printed parts – an important reason for Boom Supersonic to partner with them, since, in fact, all of the 21 components were manufactured with the Sapphire AM system.

The growth is exponential when it comes to the integration of additive manufacturing technologies in aeronautics,  as more and more companies invest in the advanced manufacturing methods. Usually, only a few elements of the vehicle are fabricated or repaired with 3D printing – as it was the case with Honeywell, who additively manufactured a critical engine component for Dassault Falcon 20G maritime aircraft. However, with the recent announcement by VELO3D and Boom Supersonic, we can see that it is in fact possible to have as many as 21 parts created with 3D printing. Why did the aircraft manufacturer decide to opt for AM for the production of that many plane parts? 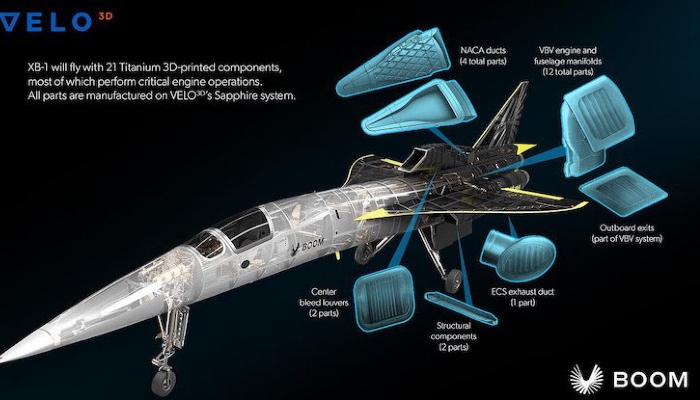 Boom Supersonic is looking to develop aircrafts capable of supersonic flight in order to shorten the time it takes to travel by air. In fact, the company aims to fly dozens of passengers per plane at a time at speeds of around 1,500 miles per hour. In this context, Boom Supersonic has turned to 3D printing technologies in order to tackle more complex geometries and reduce the weight of components. The Founder and CEO of VELO3D, Benny Buller, explained, “Aviation hardware is especially difficult to manufacture with 3D metal printing, due to challenging aerodynamic designs that must be balanced with superior durability and high-temperature requirements. VELO3D’s technology allows the production of lightweight, complex designs for mission-critical applications in the toughest operating conditions. Our partnership with Boom is truly an advancement for the metal AM industry, and XB-1 supersonic aircraft is a game-changer for the aviation industry.”

After a series of qualification trials on the VELO3D Sapphire System, Boom Supersonic has equipped its XB-1 aircraft with 3D printed components in its engine hardware and environmental control system, as well as several structural parts elsewhere in the vehicle. For example, some of the 3D printed elements include twelve Variable Bypass Valve engine and fuselage manifolds, which help to route air released by the engine compressor to the aircraft’s outer mould line, and four NACA ducts that capture exterior air and channel it into the aircraft to cool engine bays.

It should be noted that XB-1 is, in fact, the world’s first independently developed supersonic jet. It will be used to demonstrate critical technologies for Overture, Boom Supersonic’s future commercial airliner, such as advanced carbon-fiber composite construction and computer-optimized high-efficiency aerodynamics. XB-1 has already successfully passed multiple wind tunnel trials, dozens of structural tests, hundreds of simulation iterations, and tens of thousands of work hours.

What do you think about VELO3D printing parts for XB-1 Supersonic? Let us know in a comment down below or on our Facebook and Twitter pages! Don’t forget to sign up for our free weekly Newsletter, with all the latest news in 3D printing delivered straight to your inbox!