3D printing news Interviews What is the Status of Women in the 3D Printing Industry?

What is the Status of Women in the 3D Printing Industry? 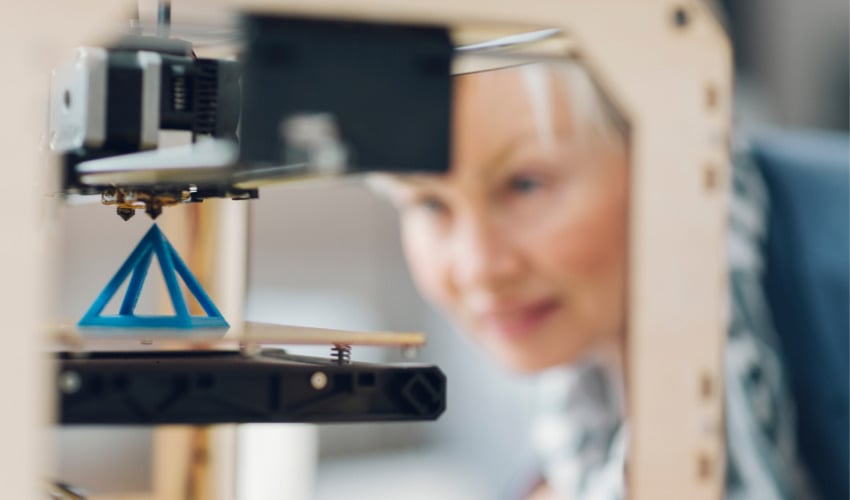 International Women’s Day takes place every year on March 8th. According to the United Nations, it is a global day that celebrates the achievements of women around the world as well as the progress that has been made up to this point in attaining gender equality. However, it also serves as a day to reflect on the advancements that still need to be made worldwide in order to truly achieve gender parity. As such, we decided to talk to six influential women in 3D printing, taking to reflect not just on the state of women in 3D printing today, but on how we still need to learn and grow in order to welcome even more women into the field in the future.

The large gender disparities in the STEM (science, technology, engineering and mathematics ) fields have been a well-known problem for a number of years now. Though women take science classes at the same rate as men in primary and secondary schools, for some reason, they are less likely than their male counterparts to study STEM courses when they reach universities, and even less likely to be working in STEM fields, with the worst disparity present for engineers, a problem also present in AM. To get more insights on the status of women in the field, we spoke with six influential women in the world of additive manufacturing: Michelle Bockman the CEO of 3D Control Systems; Marie Langer the CEO of EOS; Mariel Diaz the CEO and founder of Triditive; Cindy Deekitwong, Global Head of Marketing at Henkel; Anne Debauge, the Digital Director fo Pack&Dev at L’Oréal; and Elena López, the Head of AM at Fraunhofer IWS. We asked them how the presence of women in the 3D printing industry has evolved, what barriers still exist to women participation in AM as well as recommendations they may have to increase the number of women in the industry. 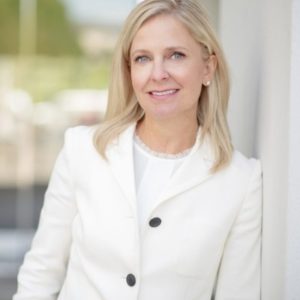 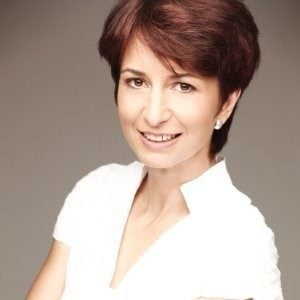 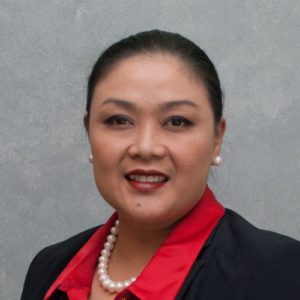 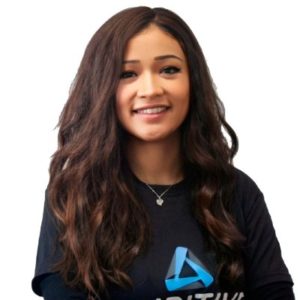 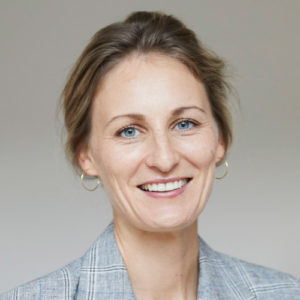 Marie Langer, the CEO of EOS 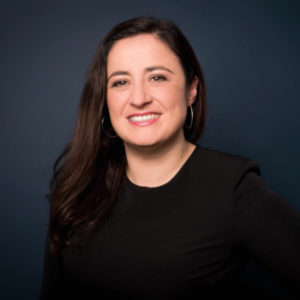 Elena López, the Head of AM at Fraunhofer IWS

Barriers to Women’s Participation in AM

It is evident that there are still some barriers to participation for women in the additive manufacturing field. For Mariel Diaz, there are three main ones preventing women from becoming more involved: “The barriers mainly fall into three areas: funding, prejudice and inclusiveness. It is necessary to put aside the prejudices against women in the sector, tackle the irrefutable lack of funding for women’s entrepreneurial ideas in the industry and also ask men in the technology what they are doing to increase the number of women in this industry(and not only women.” In her remarks, Diaz also noted that in recruitment it can be difficult to reach the female audience as far fewer women apply to these positions than men. She posits that one way to overcome this barrier is by highlighting female role models already in the industry, making more women and girls see that there is a place for them in the 3D printing industry. She also notes that it is important to support more women’s initiative in 3D printing and STEAM (Science, Technology, Engineering, Arts and Math) in general if as a society we hope to see more women working in these technical fields. Without addressing all these issues, it would be near impossible to increase the presence of women in the industry in any truly meaningful way.

That being said, one of the main issues is that this is not just affecting women in AM. This disparity between women and men is present in many other industries beyond 3D printing. Marie Langer mentions that there are of course barriers for women who want to work in additive manufacturing, and that is at least partly because men are considered before women in pretty much all industries. She states “Think about smartphones, navigation systems, crash test dummies or diagnostic tests for heart attacks. These are just some examples of products where women weren’t included in the development process. The result? Some smartphone sizes are not made for female hands. The first version of the navigation system didn’t recognize female voices. And, it’s less likely that women survive a car accident or heart attack due to missing gender parameters.” Clearly to address gender disparity, it is necessary to consider including women in all stages of decision making processes, and not just in a few positions. All six women interviewed also made it clear that having women and greater diversity in general on teams is more beneficial to the industry as a whole. Without considering the voices of 50% of the population, it is inevitable that crucial insights will be ignored, with far-reaching consequences like, as Marie Langer mentions, having products that are not able to be used by a certain segment of the population. 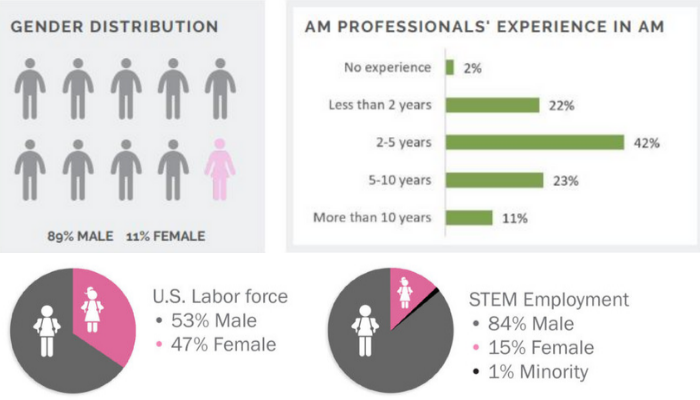 There are still far fewer women than men in the industry, with data from 2018 showing showing a 2% decrease in women’s participation in the field from the previous year. This is reflective of a wider issue in STEM where there are less women (photo credits top: Alexander Daniels Global, Additive Manufacturing Salary Survey, 2018; photo credits bottom: 3D Printing Academy for Girls)

Michelle Bockmann, CEO of 3D Control Systems, however sees that there are still ways to overcome these barriers, “I am seeing more and more women (and allies) supporting the hiring of females which is a great indicator to the barrier being broken down. I truly believe that having a diverse team helps create the best products…after all, women purchase over half of the products being built.” As we see an increase in women in positions as power in the field, the more likely it will be that women will continue to be hired in the field. This is just one of many ways that the gender disparity can be addressed. It also outlines a point made by many women in 3D printing, that the way to get greater diversity is to first include diversity on your teams. By doing this, you will see an increase not just in applicants, but in more diverse candidates being noticed for their talents.

The Evolution of Women in the Industry

Overall, it seems that there is reason for hope. The presence of the organization Women in 3D Printing in particular is highlighted by the women interviewed for its critical role in bringing attention to gender disparities in the field and fighting for visbility for women in the sector. This is especially important in an industry that is so male-dominated, Langer emphasizes, “To be honest, I would say we are only slowly progressing here and there is still a way to go. 3D printing still is a very male dominated industry. On the other hand, organizations such as Women in 3D printing have been doing a great job over the last few years in constantly changing perception, giving women in this industry a voice and opening up new opportunities for women in the industry.” 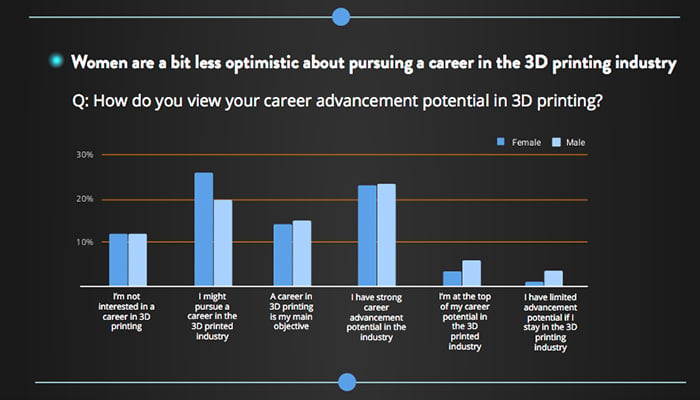 A joint Sculpteo and Women in 3D printing report showed that women are slightly less optimistic than their male peers about pursuing a career in the 3D printing industry. However, that could easily change as more women come into the industry (photo credits: Sculpteo/Women in 3D Printing)

Though it may be slow, it does seem clear that progress has in fact been made. Elena López notes “I have been working for 16 years and my feeling is that we are becoming more and more diverse. At the beginning of my career, I saw almost only gray-haired men over 60 years old around me in positions of responsibility. With the TIPE conference a few weeks ago, we saw a women-only 3D-printing conference with thousands of participants: unthinkable not too long ago! Sure it still seems like a slow evolution, but we are facing many thousands of years of history until a clear emancipation of women.” Cindy Deekitwong is especially hopeful about the progress already made, stating “It’s the perfect time to be a female working in the additive manufacturing industry. From the C-Suite on down, more women are entering the business and making an impact…Numbers have shifted dramatically with women now holding 32% of positions that have ‘business responsibility.”’

Recommendations to Increase the Presence of Women in 3D Printing

If we want to decrease the gender gap in additive manufacturing, there is still a lot that needs to be done. However, it is not an insurmountable task. There are many ways that we can work to increase the presence of women in not just the AM industry but in STEM overall. The best place to find these recommendations is from the women who are already working in the industry and understand the unique challenges that need to be addressed. Our six influential women in the industry had some final thoughts on what can be done to increase the presence of women in AM.

“I think that national education has a role to play on this. As soon as I have the opportunity, I share education initiatives to young people in fablabs to be able to deploy them more widely.” – Anne Debauge

“If you are a hiring manager or a leader in your company, you need to have diversity on your team, and if don’t, you are probably not building the best product you could.” – Michelle Bockman

“It is important to show more female role models and generate more interest in STEAM work, making more women and girls see that they can also be part of the 3D printing industry, supporting more women’s initiatives in 3D printing and STEAM in general.” -Mariel Diaz

“Much has been achieved in recent years! The important thing now is to keep going strong for those who come after us: giving talks, acting as mentors, encouraging in private meetings that it can be achieved and awakening interest in science and technology from our positions of influence, are key.” – Elena López

“I think the first step is for leaders and managers in the industry to understand the systemic disadvantages that women and also other demographics face in our industry and how to counter these in a strategic way. We need to understand that good will for things to change is not enough. This will not change unless we make real commitments to change our processes and approach to recruitment and internal promotion.” – Marie Langer

What do you think about the status of women in 3D printing? Let us know in a comment below or on our Facebook, Twitter and LinkedIn pages! Sign up for our free weekly Newsletter here, the latest 3D printing news straight to your inbox!