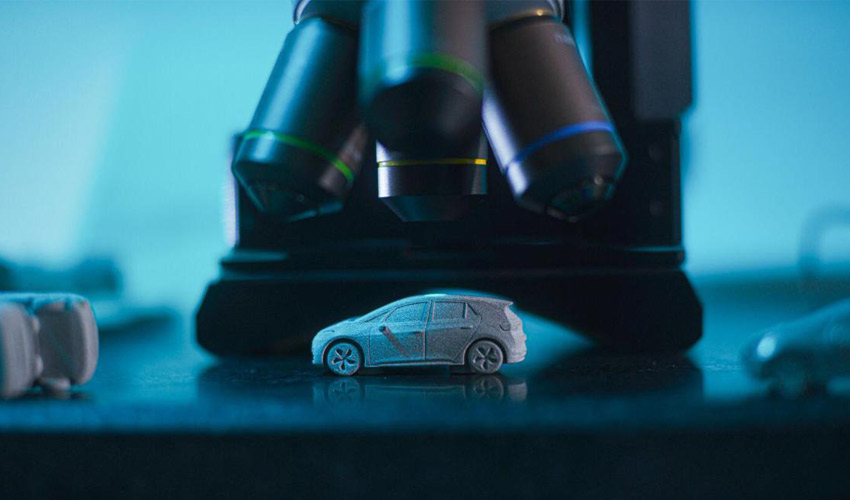 In September 2018, the American manufacturer HP announced the arrival of its metal 3D printer, the HP Metal Jet. Among the first users of the technology is the car manufacturer Volkswagen. For the past year, the German company has been testing the machine’s capabilities and does not seem to be disappointed since it has 3D printed about 10,000 parts in just a few weeks! For the launch of its new electric vehicle ID.3, Volkswagen made miniatures of the car in metal, through a partnership with GKN Powder Metallurgy. Measuring 2.5 cm long, the 3D printed parts, which serve a marketing function, represent a successful first step in Volkswagen’s roadmap to achieve 3D printing of structural parts for its cars by 2021.

Volkswagen now has 90 3D printers installed in its factories, including HP Metal Jet printers. These were first used to create custom aesthetic parts such as custom keys, etc. The second phase will focus on the production of functional parts such as gearshift knobs and mirror mounts. Volkswagen’s goal is to print 50,000 to 100,000 functional parts the size of a football per year. Dr. Martin Goede, Head of Technology Planning and Development at Volkswagen, said: “Our vision of industrializing additive manufacturing is quickly becoming a reality with HP Metal Jet, changing the game for the automotive sector. The pace of HP’s innovations and the advanced capabilities of the technology have exceeded our expectations. We achieve our objectives and actively identify and develop functional components for production.” 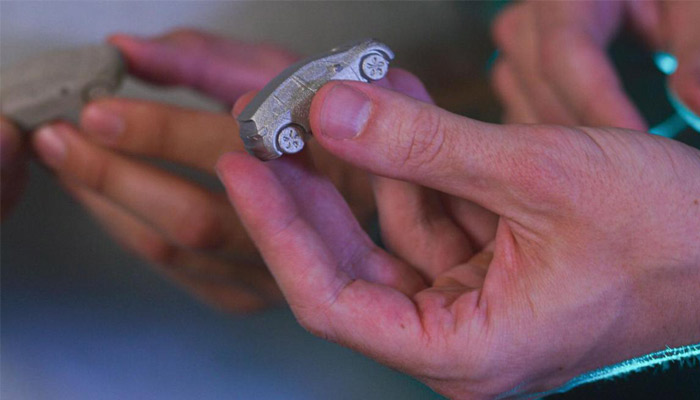 The car manufacturer’s strategy is therefore progressing according to its plans: the production of the 10,000 miniatures of the new car is proof of this. It took only a few weeks to manufacture this impressive series at HP’s and at its partner, GKN Powder Metallurgy’s plant in Barcelona. The small cars were distributed to Volkswagen employees and dealers around the world. Dr. Goede adds: “What better way to showcase innovation at Volkswagen than to use our own technologies in the marketing campaign for the first ID.3 launch. We are extremely satisfied with the technical specifications, speed, quality and low cost per part provided by HP Metal Jet. The surface quality and resolution allowed for great attention to detail and added a special touch to this important milestone for the company.”

We are still a long way from producing cars fully 3D printed, but gradually car manufacturers are setting milestones that contribute to this objective. The example of Volkswagen is obviously not the only one on the market: we ca think of BMW, which announced the creation of one million 3D printed parts last year. Who knows, maybe the ID.3 model will incorporate more 3D printed components than expected… Until you see the first results in 2021, you can visit HP’s website to learn more about its metal additive manufacturing technology HERE.

What do you think of Volkswagen use of HP’s technology? Let us know in a comment below or on our Facebook and Twitter pages! Sign up for our free weekly Newsletter to receive all  of the latest news about 3D printing straight to your inbox!

WEBINAR: How is AM Revolutionizing Industry in the Balkans?

For the first time, a 3D printed house is listed on Airbnb

#3DStartup: Handddle Structures and Industrializes the Uses of 3D Printing

The World’s Largest 3D Printed Pavilion is in Nanjing, China