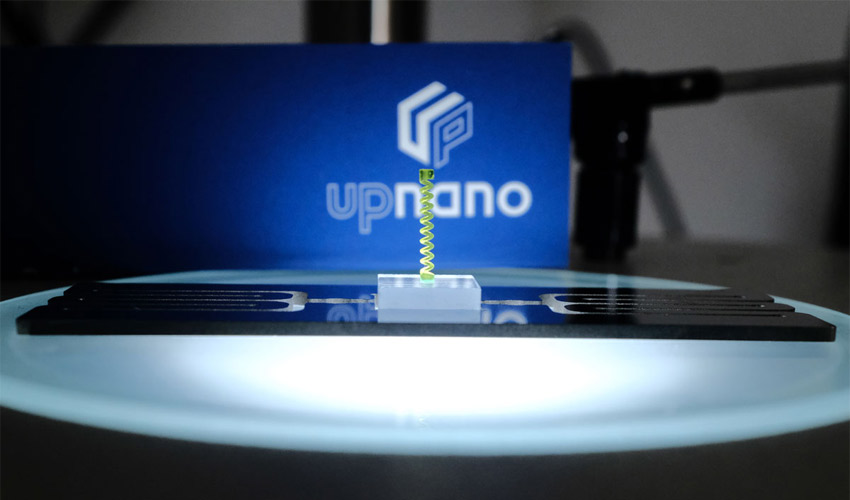 UpNano is a young company based in Vienna that has recently developed a high-resolution micro-scale 3D printing technology. Based on a 2-photon polymerization process (2PP), the new technique is capable of producing plastic parts with a volume ranging from 100 to 1012 cubic micrometers in just a few minutes. It is based on a high-power laser, a widely optimized optical path and algorithms capable of smart-scanning the printing surface. The Austrian startup can thus create very small parts, ranging from several micrometers to a few centimeters, without sacrificing resolution: the details are precise and finely worked out.

As a spin-off from the Vienna University of Technology, UpNano intends to revolutionize the field of 3D micro-scale printing, a process that makes it possible to create parts on a microscopic scale. This process is widely used in the electronics industry to design high-performance miniature components, but also in the medical sector. The Austrian company offers a 2PP process capable of reaching twelve orders of magnitude. It has developed a machine called NanoOne that can manufacture parts with sizes ranging from micrometers to centimeters, with a super precise nano-resolution. The most interesting thing is undoubtedly the speed at which UpNano was able to achieves this – it only takes a few minutes to complete such a micro-print. 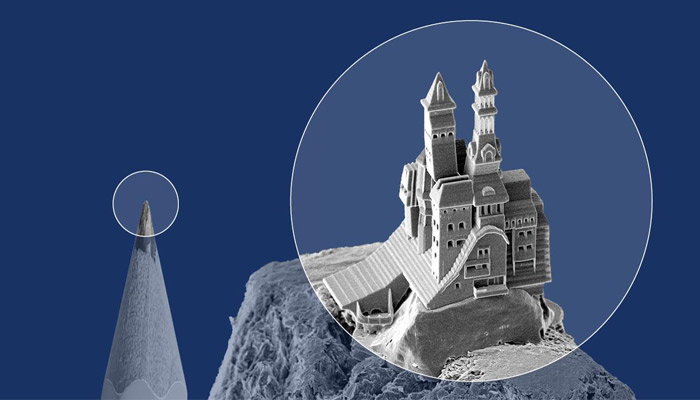 UpNano’s patented technology is based on an optimized optical path and a series of smart algorithms, allowing the full power of the laser to be used – up to 1 Watt, which is much more than what their competition typically uses. It is this power that provides the machine with sufficient energy to go faster in its printing process, especially in adaptive resolution mode. A weaker laser would have resulted in a lower throughput and therefore a much lower speed. Bernhard Küenburg, CEO of UpNano, commented: “The benefit of this innovation is most notable in the meso-range. The NanoOne system offers significantly faster production times than other systems. Add our patented adaptive resolution technology to this and you end up with a capability to print centimeter large objects with a micrometer resolution in short production cycles.“

In addition to a powerful laser, the algorithms used allow the laser spot to be enlarged by up to 10 times, depending on the characteristics of the part to be printed. Simply changing the lens is enough to produce larger or smaller parts, with more or less precision. The machine currently has lenses ranging from x4 magnification to up to x100! In order to demonstrate all the possibilities of its technology, the Austrian startup has printed four models of the Eiffel Tower in 40, 15, 3 and 0.2 mm. It took 8h49 hours to design the largest one, 1h29 hours for the 15 mm one, 37 minutes for the 3 mm one and finally 27 minutes for the smallest one.

The different sizes of the Eiffel Tower next to the associated laser lenses. (Image credits: UpNano)

When it comes to the potential applications, UpNano’s technology has been very well received in the medical industry and in R&D. For example, it has enabled the design of micro-needles with very precise features. It is also interesting for the mechanical sector – a 6 mm high spring was printed in less than 6 minutes (demonstrated on the cover image of the article). Overall, the field of applications is wide and we invite you to visit the startup’s website to learn more.

What do you think about UpNano micro-scale 3D printing technology? Let us know in a comment down below or on our Facebook and Twitter pages! Don’t forget to sign up for our free weekly Newsletter, with all the latest news in 3D printing delivered straight to your inbox!

AMT on expanding applications thanks to post-processing solutions