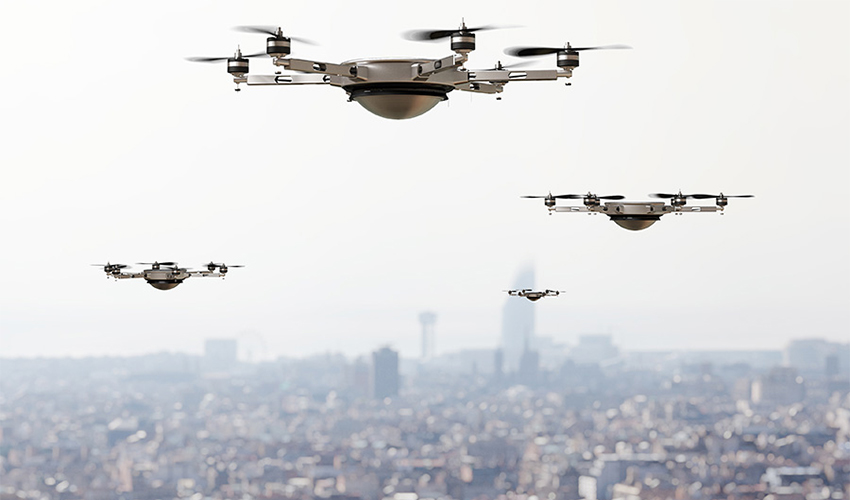 Drones are small aircraft without a pilot or passengers that are controlled remotely or automatically. They serve several purposes in the modern world, including for surveillance, reconnaissance, photography, among other applications.. They are also popular with individuals who use them as gadgets. There is therefore a wide range of drones on the market today, and as you might expect some are even 3D printed! From commercial drones to DIY projects, 3D printing makes it possible to produce certain parts of the device, or even the whole thing. The use of AM allows for lighter, customizable solutions in record time. So we’ve selected a few 3D of the currently available printed drones for you, whatever your needs.

Spanish startup AldoraTech is dedicated to the manufacture of functional drones that integrate 3D printed parts with composite materials. Specifically, its solutions are used for various types of missions, including the delivery of goods and packages. One of the objectives that the company wants to achieve through its drones is to reduce by 80% the carbon emissions emitted through logistics transport. What is striking about these drones is that they are modular, i.e. they can be adapted to the needs of each customer. In addition to shortening delivery times, they can create larger aircraft for specific goods. And this can be achieved thanks to the versatility and flexibility offered by 3D printing technology. 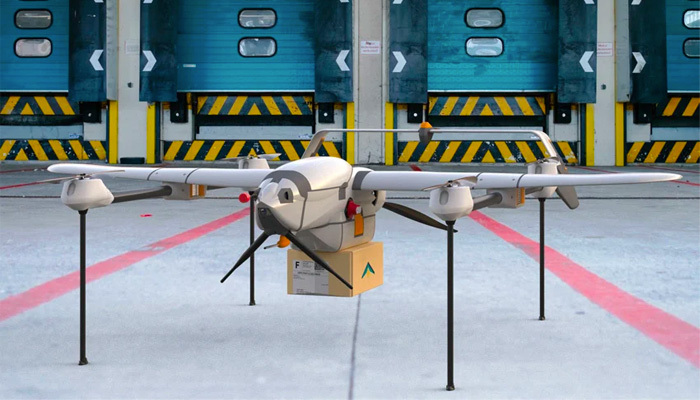 X VEIN, the 3D Printed Drone with an Optimized Design

X VEIN is an open-source 3D printed drone project developed in Japan by Yuki Ogasawara, Ryo Kumeda, Yuji Fujimura and Tetsuya Konishi. What is particularly interesting about this 3D printed drone is how its creators relied on design rules specific to additive manufacturing. They used generative design and topological optimization to combine strength, safety, lightness and scalability. We can see that the frame of the drone has been optimized in terms of materials, the goal being to create a lighter drone that can still resist certain constraints. You can download the parts on Autodesk’s website and install a camera in the center of your drone to take unseen videos! 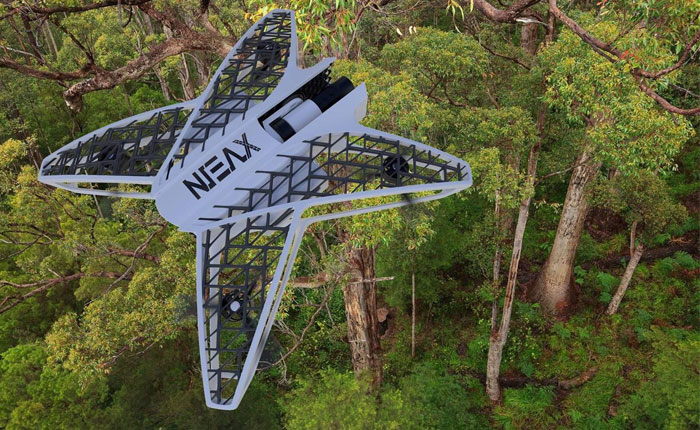 Launched in 2017 by researchers at KU Leuven, a university located in Leuven, Belgium, the CargoCopter drone is the result of three years of research. And during this development phase, 3D printing played an extremely important role. In particular, the technology allowed the research team to produce several prototypes to determine the best features. Once the design and materials were chosen, the project’s actors completely 3D printed the CargoCopter. Capable of carrying a 5kg load, the drone would be able to reach 150 km/h and travel distances of 60 km. Capabilities that make the CargoCopter a more than viable alternative for deliveries.

The Auxdrone Lifeguard by General Drones

This new drone has been responsible for the surveillance of the beaches of Port de Sagunt and Palma de Mallorca this summer. The Auxdrone Lifeguard was presented in Las Naves, an innovation center belonging to the Valencia City Council as a first step to bring new technology to surveillance and rescue at beaches. With the speed and capacity of the Auxdrone it will be faster and easier to reach inaccessible areas to help people in need. As it is suppose to look over us at the beach the 3D drone has been designed to be resistant to sun, humidity and corrosion, necessary steps for it to function under the natural conditions of which it will be working. 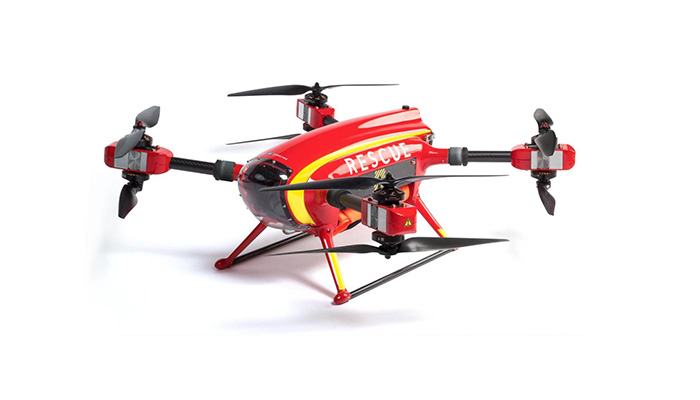 Our next 3D printed drone on offering is actually available for download from Thingiverse. The drone was uploaded in 2014 from user Brendan22 and is a popular DIY drone on the platform. It is entirely 3D printable without support and can be put together with simple assembly. The creator notes that it will be necessary to integrate a battery and wiring, though the drone itself was designed to have beveled cable tunnels and tie mounts for easier cable routing. If the T4 is not exactly the design you were looking for, the creator has uploaded others including the TX8 Octocopter Drone, the T Copter Mini Legs, T4 Quadcopter Mini 315 Drone, the T4 Quadcopter Mini 250 Drone and more. To learn how to make the original yourself, check out the build video below.

The Tundra® Drone by Hexadrone

The Tundra® Drone was developed by Hexadrone in collaboration with Raphael Cheze. The industrial drone is the first of it’s kind in terms of being a fully modular end easy to use drone, fully 3D printed to be used in industrial settings and for multi-purpose tasks. Part of this is its rapidly detachable arms and three quick release attaches. All making it very flexible meeting the needs of any profession. Supporting this further is the fact that it was made for extreme weather conditions. Thanks to a rugged and waterproof design. The Tundra® Drone won the Red dot award earlier this year 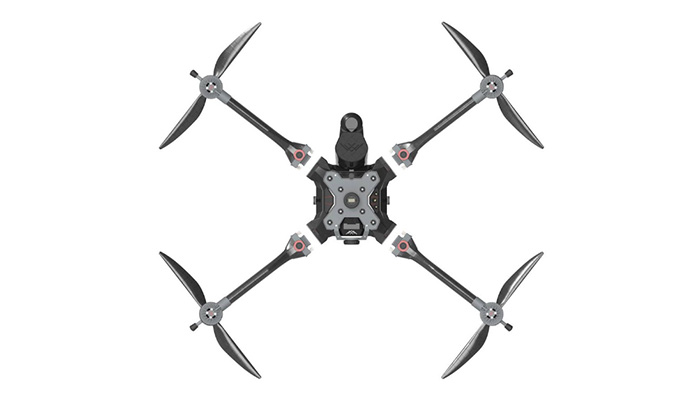 Dronistics has developed a range of autonomous flying drones whose main features are that they are safe, portable and lightweight. Dronistics is particularly aimed at the logistics and services market, proposing an environmentally friendly, cost-effective and efficient drone delivery solution. It is presented as a solution for last minute delivery problems, as well as deliveries to difficult to access locations. The PackDrone is a safe drone by design. The cage surrounding it protects the package and, in addition, it is foldable, allowing users to save storage space. The GearQuad is made of a dense grid, which protects hands and fingers from the rotation of the propellers, so it is also safe for people. To control the drone you only need an Internet connection and the Dronistics app, which has a GPS and controls to ensure the safety of the package. 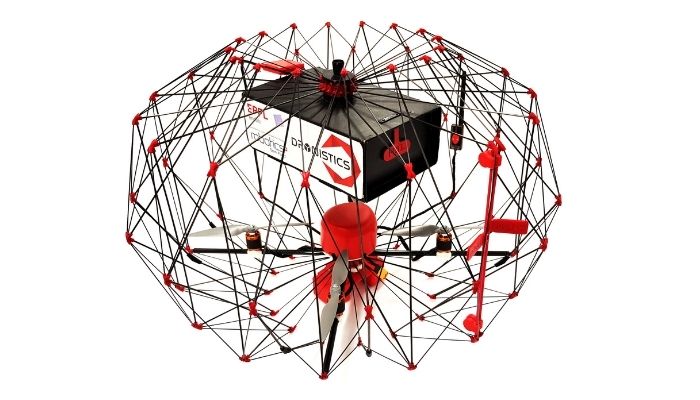 The Dark Matter® by Clogworks

The Dark Matter® drone is based on a modularity concept. An approach allowing for flexibility and ease of maintenance without having to downgrade the performance of the drone. It has fully detachable arms, legs and a quick release payload attachment system. The Clogworks team behind the drone works with in-house rapid prototyping, designing custom parts using carbon fibre, CNC machining and 3D printing to make the customized and specific parts needed. Check out the UK company’s works here:

Piccolissimo, a 3D Printed Drone out of UPenn

Students at the university of Pennsylvania created, what they believe to be, the world’s smallest self-powered drone. Piccolissimo in Italian means “tiniest” and actually coveres two devices. The first consisting of simply a propeller, a power source and an infrared receiver; telling it how fast to spin. All of which is no bigger than the size of a quarter. The second version has some added elements to allow for it to be maneuvert, making it about a cm wider than its little brother. Both of which has a 3D printed main body. The small size isn’t necessarily hindering its possibilities. Instead it could lead to it being a positive with cheap production cost do to it’s size and simplicity. It could be brought in masses for search missions or similar initiatives, perfect for this little 3D printed drone. Learn more about the project on their website. 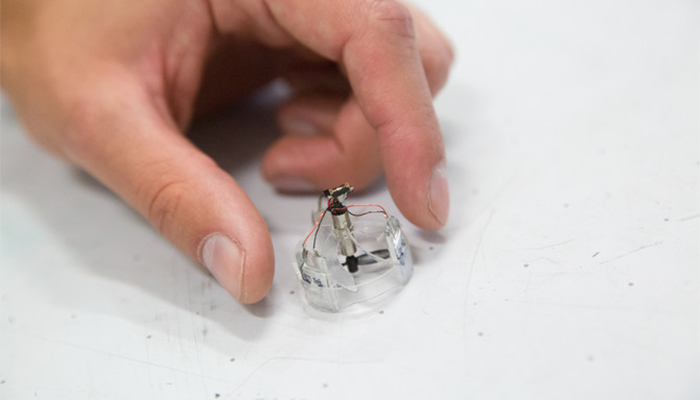 What do you think of these 3D printed drones? Let us know what you think in a comment below or on our Facebook and Twitter pages! Don’t forget to sign up for our free weekly Newsletter, with all the latest news in 3D printing delivered straight to your inbox!