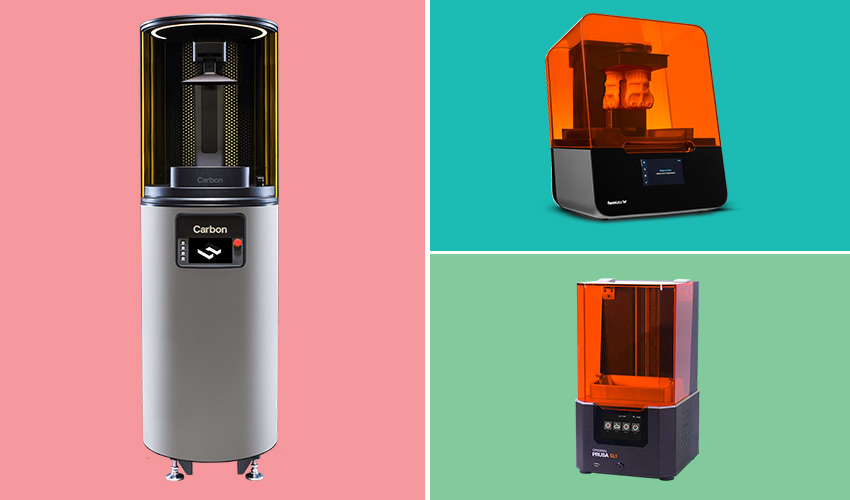 In 1986, Chuck Hull created the first 3D printing technology, also known as stereolithography (SLA). These SLA 3D printers, which are based on photopolymerization, use a laser to harden a UV-sensitive resin, layer by layer. This technique has inspired new techniques such as DLP, which uses a video projector instead of a laser, or LCD technology which as its name suggests uses a LCD screen as an UV light source.

Other processes such as MovingLight (developed by Prodways) or Carbon’s Digital Light Synthesis technology are also included in the listing below. The aim of the latter technologies is to accelerate the manufacturing process. Once reserved only for manufacturers and laboratories, SLA technology has become increasingly accessible over the years, both in terms of price and ease of use. Manufacturers have improved the performance of machines, both in terms of speed and build volume. 3Dnatives has selected for you 16 resin 3D printers that exist today on the market, ordered by price.

The Photon 3D printer, the cheapest machine in our selection, retails for a price of only $419.99. The Photon is produced by the Chinese manufacturer Anycubic, it photopolymerizes a resin using an LCD screen offering a resolution of 2560 x 1440 px. Despite its low price, it still has a full-color LCD screen on the front, a proprietary software called Photon Slicer and a carbon filtration system. On the performance side, it displays a manufacturing volume of 115 x 65 x 155 mm and announces a minimum layer height of 25 microns. 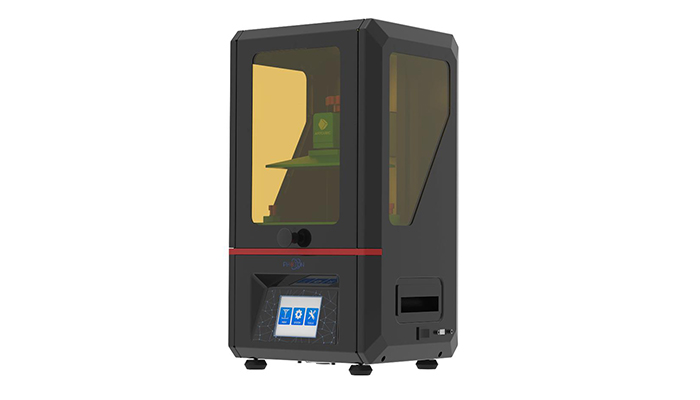 In 2016, the manufacturer Peopoly embarked in the race for 3D resin printers with a successful Kickstarter campaign and collected over $250,000. From there the Moai solution was born with its resolutely minimalist look! With its 70 micron point precision laser for a minimum layer thickness of 5 microns, its manufacturing volume of 130 x 130 x 180 mm, Moai is distinguished by its DIY approach. Indeed, the 3D printer comes as a self-assembly KIT. This resin 3D printer’s starting price is $1,199. 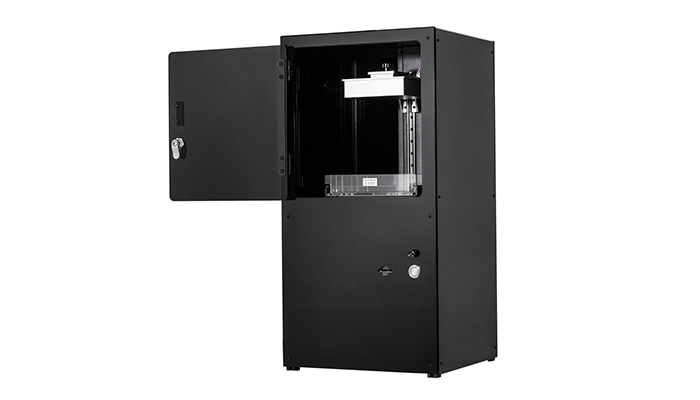 In September 2018, Prusa, a manufacturer known for its open-source FDM 3D printers, entered the stereolithography market with the SL1. This open-source machine offers a printing volume of 120 x 68 x 150 mm and uses an LCD screen to harden the resin layer by layer in just 6 seconds. It is equipped with a resin tank containing a transparent and flexible FEP film, making it easier to change the tray. Delivered with a post-processing machine, the Prusa SL1 is available from $1,599, making it one of the cheapest 3D resin printers in our selection. 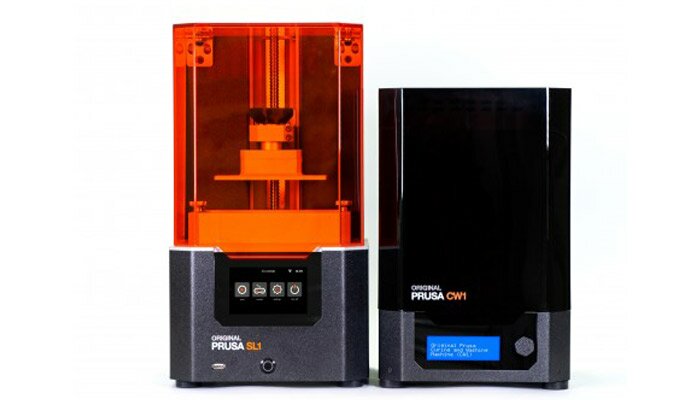 Taiwanese manufacturer XYZprinting is one of the world’s leading manufacturers of personal 3D printers, with competition from the likes of Ultimaker and MakerBot. Already present in the low-cost FDM printing industry, they launched in the resin 3D printer market. The last machine they presented was the Nobel 1.0 A. The Nobel 1.0 A SLA 3D printer offers a 128 x 128 x 200 mm print volume, while also including an intelligent filling mechanism for the resin tank. The STL files are loaded using a USB key, or via a USB cable connected to a computer. The Nobel 1.0 A is available for a price of  more or less $2,227 (1,999€). 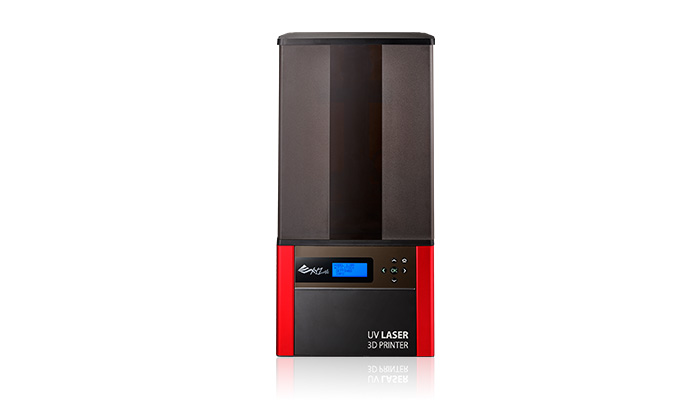 Like Prusa, Polish manufacturer Zortrax introduced its first 3D resin printer, called Inkspire. The manufacturer opted for LCD technology to combine speed and precision. Zortrax claims that its 3D resin printer is 8 times faster and 9 times more accurate than its competitors. It offers a relatively small printing volume of 74 x 132 x 175 mm and a minimum layer thickness of 25 microns. It can be accompanied by an ultrasonic cleaner, Zortrax Ultrasonic Cleaner, to facilitate post-processing steps. The Inkspire printer is available at a starting price of $1,990 (without tax). 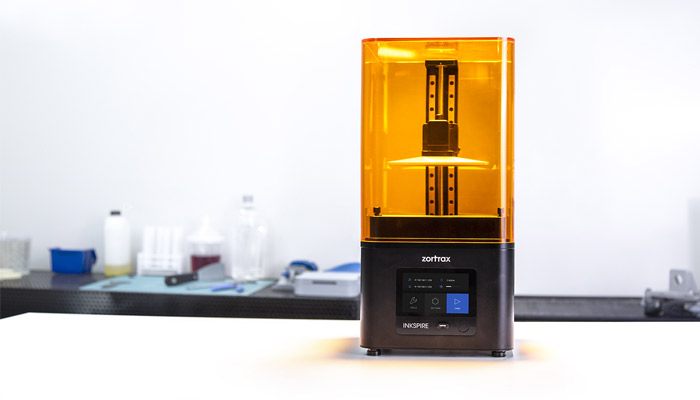 Formlabs is one of the pioneers of office stereolithography, renowned in particular for its Form 2. In April 2019, it announced the arrival of two new machines, Form 3 and Form 3L, based on a brand new printing process called Low Force Stereolithography (LFS). The main objective of Formlabs was to increase the printing volume: Form 3 can create parts of 145 × 145 × 185 mm, while Form 3L can achieve up to 300 × 335 x 200 mm. The two printers are also supposedly faster and more accurate, offering a minimum layer thickness of 25 microns thanks to a 250mW laser power. The 3D printers are available at $3,499 and $5,999 respectively. 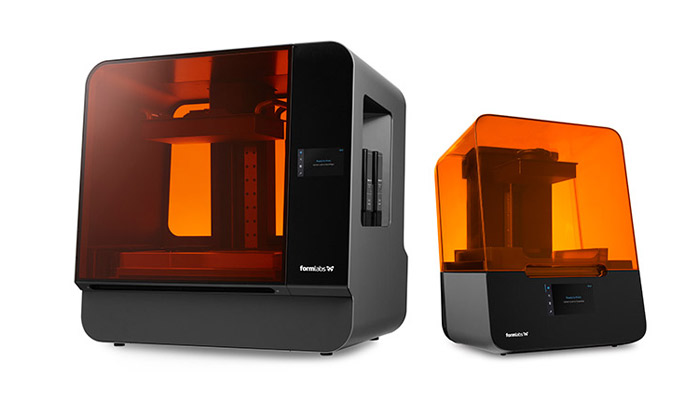 After a successful crowdfunding campaign on Kickstarter in April 2015, MoonRay S has since been available for $3,499 (€3,123). The resin printer, which was developed by SprintRay, operates using a DLP process that uses a custom-designed projector with a lifetime of 50,000 hours. As for its performance, the MoonRay displays a minimum layer of thickness of 20 microns for a horizontal resolution (XY) of 100 microns and has a manufacturing volume of 127 x 81 x 229 mm. 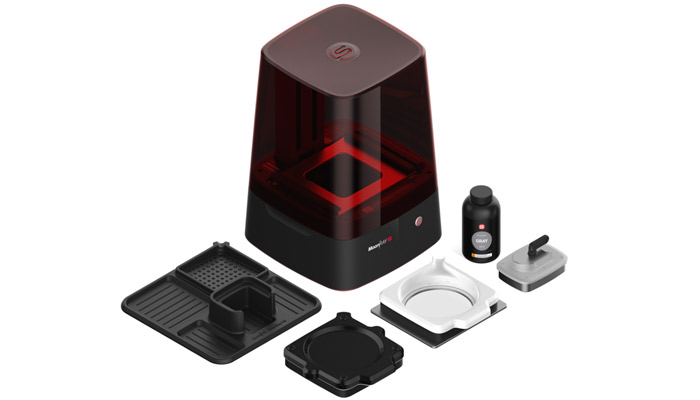 The Californian company Uniz launched the Slash Pro, a 3D printer that is a desktop solution for professionals. The Z-axis of the machine has been doubled compared to the original Slash model. The printer works with LCD technology. It offers a build volume of 192 x 120 x 400 mm and is known for its very high speed of 200 mm per hour. The machine is also available in the Uni-Directional Peel™(UDP) version, with which it can reach up to 600 mm per h under certain design conditions. Uniz also offers a wide range of materials for various applications, such as 3D printed jewellery or dental applications. The machine is currently available at a price of $4,499. 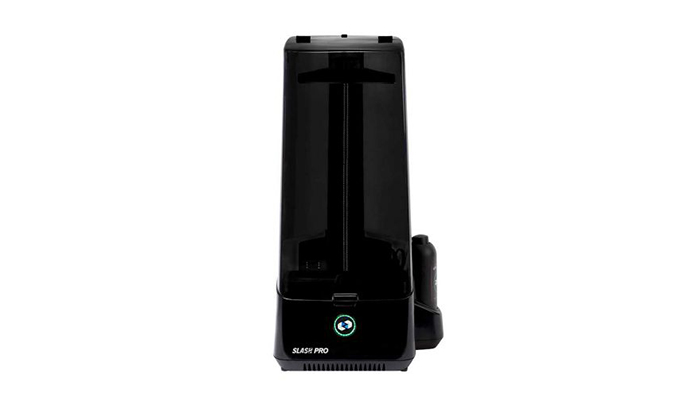 Better known for its 3D FDM printers, the manufacturer FlashForge has also embarked resin 3D printer race with  its Hunter solution. A DLP model marketed at a price of around $4,999. Among its important features, we can mention that it comes with a 1080px Full HD lamp, an ARM 8000Mhz Advanced Dual-Core processor and a dedicated print media creation feature for jewellery pieces. With its FlashPrint software, the FlashForge Hunter offers a print volume of 120 x 67.5 x 150 mm, for a minimum dot size of 62.5 microns and a minimum layer thickness of 12.5 microns. It also has WiFi connectivity and allows the use of competing resins. 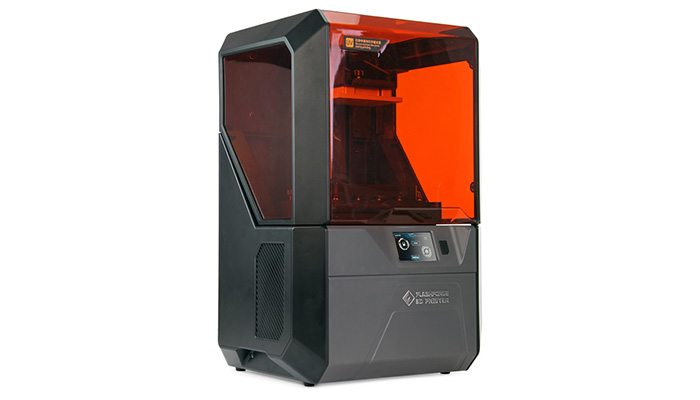 3D Systems manufactures 3D printing solutions for many sectors and using different technologies. Its resin 3D printers were the first the company launched, the ProJet 1200 being the first. It offers another entry-level machine known as the FabPro 1000, marketed just under the $5,000 mark. With its compact dimensions, the FabPro 1000 offers a small build volume of 125 x 70 x 120 mm for a minimum layer thickness of 30 microns. It uses proprietary resins and is offered with a finishing kit and an optional UV chamber. 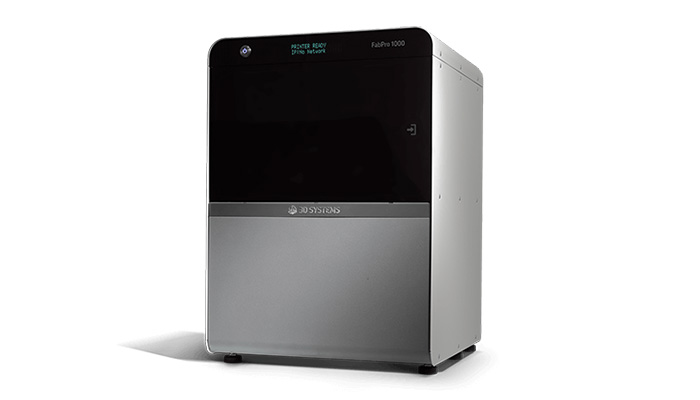 Founded in Australia in 2011, Asiga specialises in Digital Light Processing (DLP) technology. The Asiga MAX Mini is the smallest solution from the manufacturer, it offers a build volume of 51 x 32 x 75 mm and comes with 2 versions of different LED wavelengths, 385 or 405 nm. It is mainly used in the dental sector, but also in audio technology and the jewellery industry. In addition to the materials that Asiga offers, the machine is also compatible with all suitable materials from third-party suppliers. Currently the MAX Mini can be purchased for approximately $7,990. 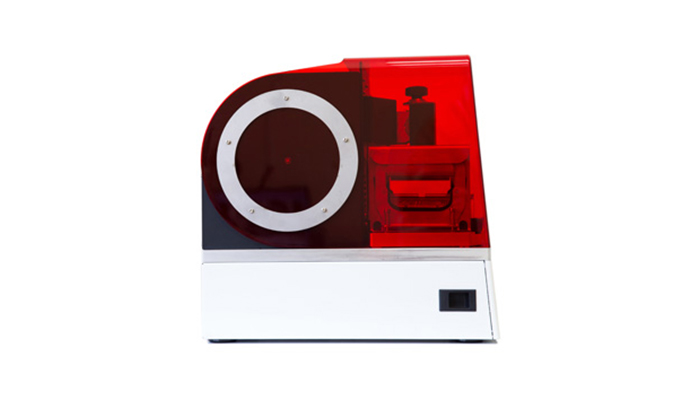 DWS Systems is an Italian company specializing in the manufacture of  SLA 3D printers. One of its most recent launches is the XFAB 2000 3D printer, considered one of the best options for the creation of jewelry pieces. It uses the brand’s patented BluEdge laser, with a 180mm diameter cylindrical printing tray, a layer thickness of 10 to 100 microns, also capable of working with a range of 12 materials. The XFAB printers use TTT (Tank Translation Technology) which ensures that the tank wears evenly and avoids localized laser damage. 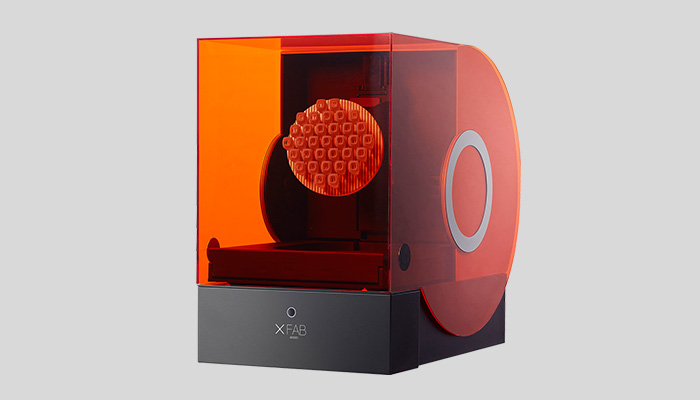 The American brand B9Creations offers an improved version of its DIY 3D printer with the B9 Core 530. The printer is based on DLP technology and works with a video projector that flashes and solidifies the liquid resin. It is clearly dedicated to professionals with a price around $9,955. The B9 Core 530 displays on paper a layer thickness of 10 microns, a XY resolution of 30 microns and a manufacturing volume of 57.6 x 32.4 x 127 mm. Among other interesting features, we would like to point out the large full-color touch screen in front, the WiFi connection and the possibility of using competing resins. 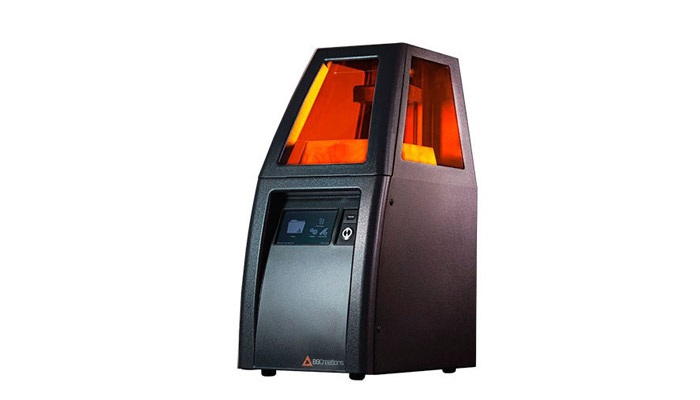 The Liquid Crystal Magna is one of the most recent launches from the British manufacturer Photocentric, initially specialized in the creation of resins for 2D printers, it launched its first 3D solution in 2015. This new 3D printer uses its patented technology of the brand, based on the principles of stereolithography but using an LCD screen. The printer has a large printing volume of 510 mm x 280 mm x 350, one of the largest for resin machines. This machine has a layer thickness of 100 microns, and according to the manufacturer is perfect for the development of small series. Its starting price is $14,180 (£10,995). 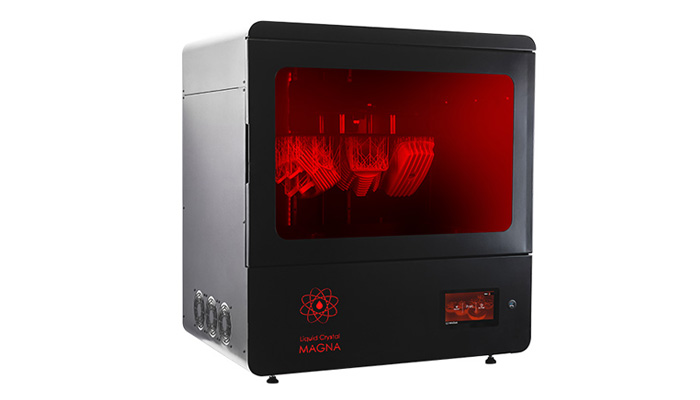 EnvisionTec has developed the Vida 3D printer for a wide variety of professional and medical applications. Vida presents a high-resolution projector running at 1920 x 1080 pixel resolution with custom UV optics. The build volume of this machine is 140 x 79 x 100 mm and can achieve XY resolution of 73 µm and Z resolution of 25 to 150 µm. The user interface has been enhanced by touchscreen and WIFI connectivity. Moreover, this machine is compatible with the leading dental, hearing aid, and other professional design software. The manufacturer has also ensured that a wide-range of materials can be processed so that the user can 3D print dental, orthodontic, hearing and other products. The manufacturer hasn’t revealed the exact price of the Vida 3D solution, but it lies somewhere between $10,000-$50,000. 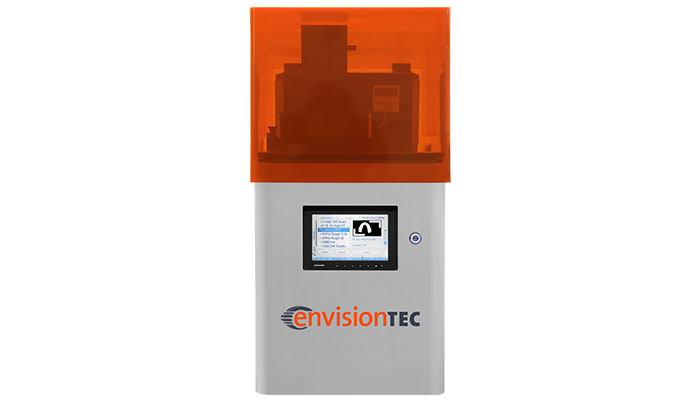 After coming out with its pioneering M1 3D printer, Carbon released an upgraded model, the M2. This industrial 3D printer features double the build volume of the M1, 189 x 118 x 326 mm to be exact. It uses Carbon’s Digital Light Synthesis technology to manufacture high-resolution pixels (75 µm) and isotropic parts. The M2 is integrated with Carbon’s software that allows hardware and materials to come together into an easy-to-use system. Carbon’s technology is said to be 25 to 100 times faster than other comparable technologies and the M2 is compatible with Carbon’s range of proprietary materials. The M2 is available as a subscription service with a minimum 3-year term, priced at $50,000 per year. 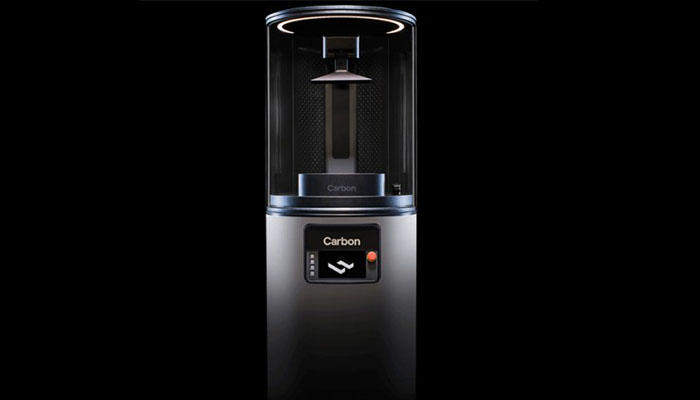 Do you own a SLA or DLP 3D printer? Are you a resin 3D printers fan? Share your reviews in a comment below or on our Facebook and Twitter pages! And remember to sign up for our free weekly Newsletter, to get all the latest news in 3D printing send straight to your inbox!