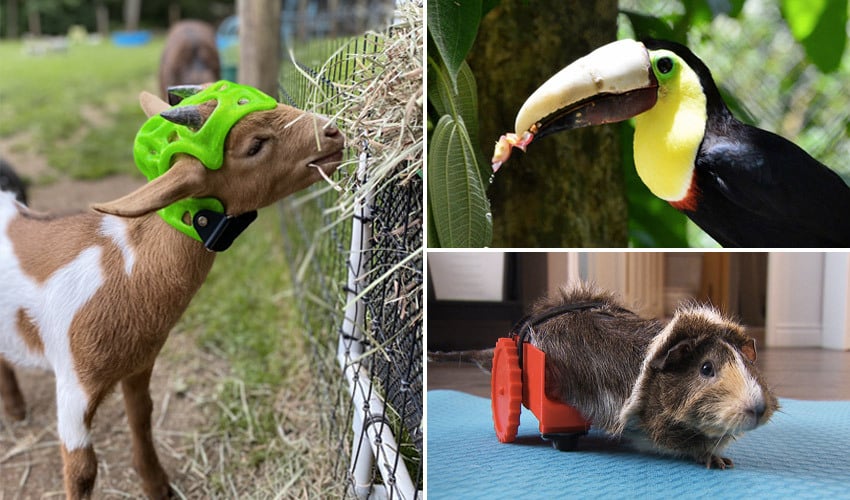 3D printing is known to reach across industries and help everyone around the world, and this includes animals! We decided to take a closer look down at some of the animals that have had their lives saved or helped thanks to the power of 3D printing. Just like with humans, 3D printing has numerous applications for helping animals who have lost limbs or other important body parts. Thanks to increasingly cheaper technologies as well as accurate scans, many different animals have had the opportunity to have a customized 3d printed prosthetics or orthotics, significantly improving their lives. Though this list is by no means exhaustive, we took a look at some of our favorite examples below.

Paris Shelton, the hermit crab, was forced to abandon its natural habitat due to a shortage of shells, forcing the crustaceans to make homes out of any trash that they can find, such as glass bottles. In response to this situation, which affects not only Paris Shelton but many hermit crabs, Makerbot launched the Shellter project. This community initiative is designed to give these marine animals a new home through 3D printing, while still being environmentally friendly. To accomplish this, they enlisted the help of makers to design new shells. The designs were then 3D printed and integrated into the environment of the crabs and hermit crabs, saving their lives.

Using Thingiverse, Makerbot and TeamUSA called on fellow makers to reach into their creativity to create new shell designs, which are then uploaded onto Thingiverse using the tag “SHELLTER”. From here, the team 3D prints the shells and incorporates them into their crab habitat (or crabitat) at the Botcave in Brooklyn, New York. Using their crabitats, they are able to see the preferences of the crabs, helping them to end the current hermit crab crisis. 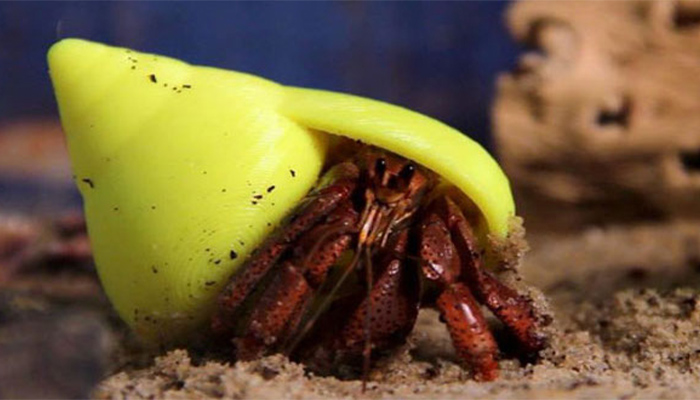 Wadddles the duck and his 3D-printed prosthetic

Born with a deformed leg, Waddles the duck was lucky enough to cross paths with Derrick Campana, a prosthetist specializing in animals. In order to help Waddles, the prosthetist 3D printed an artificial leg for the duck. To achieve this, he first made a mold of the paw, then scanned and modeled the mold, before finally printing the prosthesis assuming that it would act as the paw. If the duck had difficulty adapting to it at first, it now walks perfectly and doesn’t hesitate to lean on it when necessary! 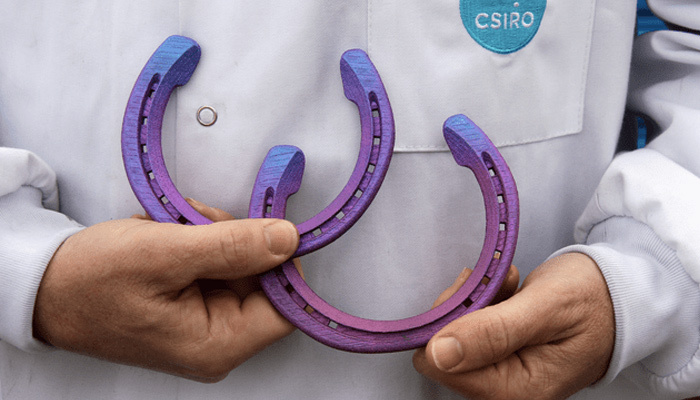 CSIRO was the leader in making 3D printed horse shoes. Though they have less of an impact on quality of life, they are still important 3D printed prosthetics for animals (photo credits: CSIRO)

Horse shoes are very specific pieces that you would never imagine could be 3D printed. Well, think agin, they don’t just already exist, they have actually been met with quite a lot of acceptance. Specifically, it was the Australian company CSIRO that manufactured 3D printed horseshoes called “Titanium Shoes”. The project uses titanium instead of aluminum to create lighter racing shoes that allow horses to have a better performance. This also involved 3D scanning technologies that digitize the animal’s hoof so that the parts can be 3D modeled with dedicated software.The scanning process takes only a few minutes and, for one horse, custom shoes can be made and printed the same day.

The now Instagram-famous Chihuahua Turbo Roo was born without his two front legs and was unable to walk or to run or keep up with his other doggy buddies. A viral moment with the adorable two-legged pup caught the attention of an aerospace engineer in San Diego, who then designed and 3D printed Turbo Roo’s wheelchair harness then added rollerblade wheels. Thanks to his 3D printed wheels, Turboro is now always on the move.

AKUT-3 the loggerhead turtle from Turkey met a sad fate after a devastating boating collision that left him without about 60 percent of his jaw, leaving him without the ability to eat and with little chance of survival in the wild. But, thanks to Turkish company BTech Innovation which specializes in medical prostheses, AKUT-3’s 3D printed titanium jaw gave him a new lease on life.

The process to help AKUT started much as it would have with any human patient. The turtle’s carers at Pamukkale University’s Research, Rescue and Rehabilitation center sent scan images of the damaged jaw to Btech Innovation who then were able to create a customized implant made out of medical-grade titanium (the preferred material for many prosthetics, including those that are 3D printed) for the turtle, what may have been the first 3D jaw created for a wild species.

The surgery for AKUT’s new jaw lasted 2.5 hours and was performed by both surgeons and veterinarians. Following his surgery, it seems that his body has accepted his new jaw and though there have not been many updates, it is likely that once he returned his strength, he was returned to the wild which was the teams’ ultimate goal. 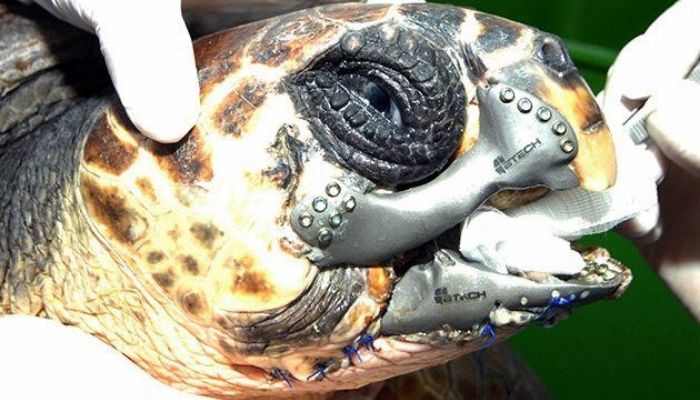 In Toronto, Canada,  Alaska the Guinea Pig was able to gain her mobility back after having one of her front legs amputated due to a post-birth uterus infection. Alaska’s owner was able to enlist the help of the digital design technician using the Toronto Public Library’s Ultimaker 2+ 3D printer to  create a wheelchair for her tiny pet. While local veterinarians could only offer wheelchair options for larger animals, Alaska was able to get a custom wheelchair 3D printed that would support her 700 gram frame. 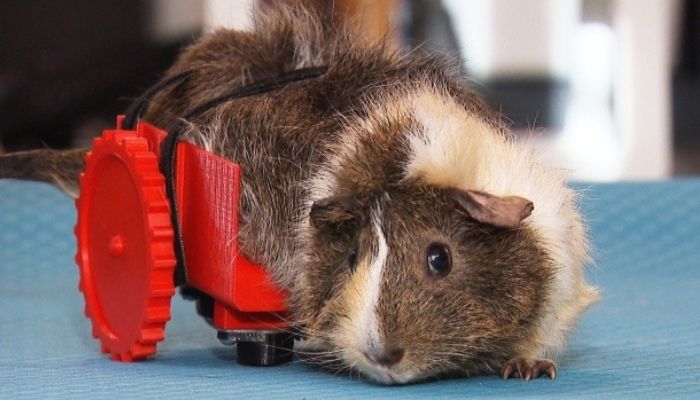 Born with a large hole in his skull which left his brain tissue exposed, Bo the Baby Goat is able to keep his brain protected thanks to his custom TPU helmet by Dive Design. Since Bo is still a growing billy goat, he needs to have a new helmet every few weeks as his head size changes. DiveDesign used a 3D scan and sent Bo a new helmet this summer! 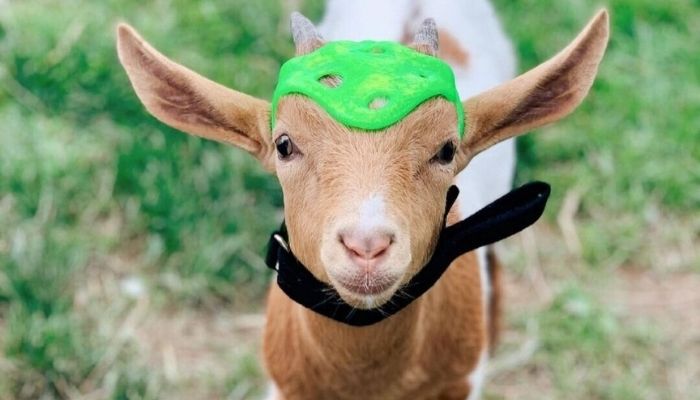 Grecia has the dubious honor of being the first toucan to receive a 3D-printed beak. Hailing from Costa Rica, Grecia had the misfortune of being attacked by teenagers, though the perpetrator was never found. Unfortunately, this incident caused her to lose more than half of the top of her beak. Though devastating regardless, this was particularly a problem for Grecia. For toucans, their beaks are an integral piece of their anatomy enabling them to not only eat and speak, but also regulating the temperatures of their bodies.

Because of the brutality of the attack, many were not sure that she would survive. However, her spirit inspired people to look into ways to get her a new beak, including a 3D-printing company from the US who decided they could help. In order to create her new prosthetic beak, the team used scanned the beak of another Toucan who had passed, the beak was then made of nylon and assembled in what was likely an SLS machine, though more details were not released. In any case, Grecia’s rehabilitation was successful thanks to 3D-printing and she even went on to become a symbol against animal abuse in Costa Rica. 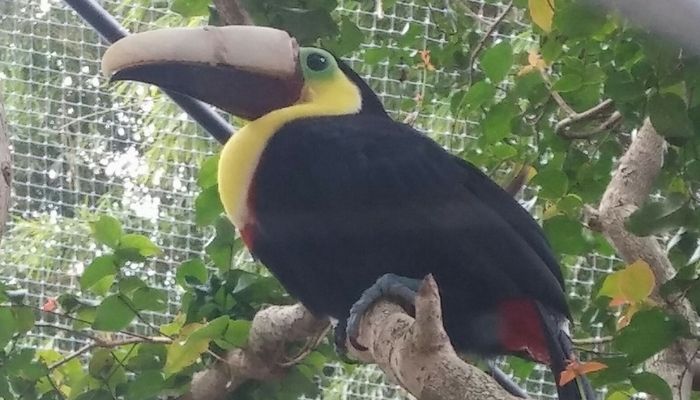 Grecia’s beak is yet another example of how 3D printed prosthetics can help animals (photo credits: Bob J Galindo – Own work, CC BY-SA 4.0, via Wikipedia Commons )

More and more 3D printing is being seen for its use for making 3D printed prosthetics for pets who before might not have had any options. One such person is Argentinian computer engineering study Alejandro Colli who works to help injured dogs by making them 3D-printed prosthetic limbs. Like many of the younger generations, his project started on twitter where he launched a call to his followers announcing that he would be making 3D printed prosthetics for dogs specifically. After reaching out to a nearby veterinary hospital, he started making his first protoytpes.

The first actual prosthetic he made took several months before it was ready to be tried on an animal, though he was able to become quicker as time went on. He gave away the prosthetics for free and has sent to various countries in South America, including Argentina, Panama, Mexico, Colombia and Chile. 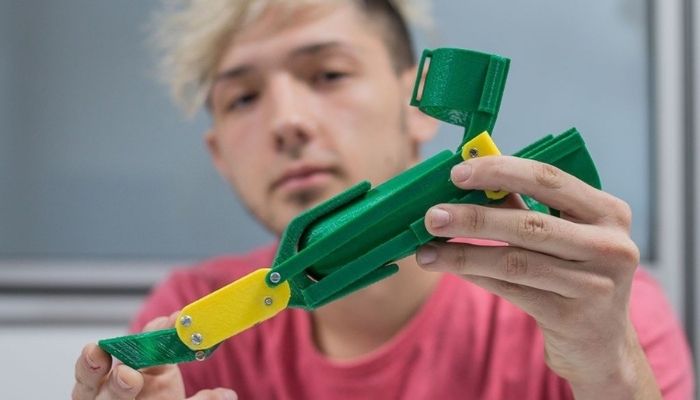 Mr. Stubbs, the alligator with a 3D printed tail

This American alligator, named Mr. Stubbs, lost his tail several years ago while being illegally transported by a group of animal traffickers. After some time without being able to find him a suitable prosthesis, a team of experts turned to 3D technologies to give the animal a better quality of life. They used an Artec 3D scanner to create a specialized appendage for the alligator. The high precision accuracy allowed them to make the animal a well-fitting tail fully customized for its size and body composition. Fortunately, Mr. Stubbs readily adopted the new prosthesis and quickly integrated it into the way he moves his body.

Fred the Tortoise and the “Animal Avengers”

In yet another case of 3D printed prosthetics for animals, or more specifically amphibians, in Brazil, Fred the tortoise received his very own 3D printed tortoise shell, a first in the world of 3D printing. After losing 85% of his shell as a result of a forest fire, a group of volunteers at the “Animal Avengers”, recreated his shell using forty photos that were taken of healthy tortoises. Printed 4 times, the pieces required 50 hours of printing and used a plastic filament to print with an FDM desktop printer. The shell was then painted by a volunteer artist to help make the shell look more realistic. After, Fred was able to feel at home in his new home and continue living a long and happy life with his other tortoise friends. 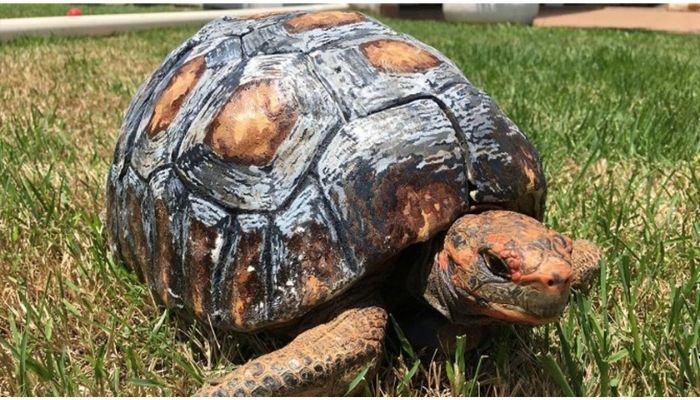 Following a run in with a fishing line in 2007, Bagpipes the penguin’s leg was left too damaged, with the only real choice being to  amputate it. Since then, he had been hopping around on one foot at his home at the International Antarctic Centre in Christchurch New Zealand. After almost 10 years of him hobbling around, in 2016, they enlisted the help of Professor Dr. Clucas from the University of Canterbury in New Zealand to design and print a prosthetic to help give an old bird a new life.

During the creation process of the leg, Dr. Clucas ran into some difficulties during the scanning process of his leg, as he wouldn’t stop moving and wiggling it, ultimately complicating the process. After finally getting the perfect scan, the 30 hour printing process began. Using a plastic to create his foot, Dr. Clucas continues to make improvements with newer models such as making it easier to clip it on, as well as a rubber material to improve his grip. Thanks to 3D printing and Dr. Clucas, Bagpipes can now continue to live a full life, going from wobbling to waddling. 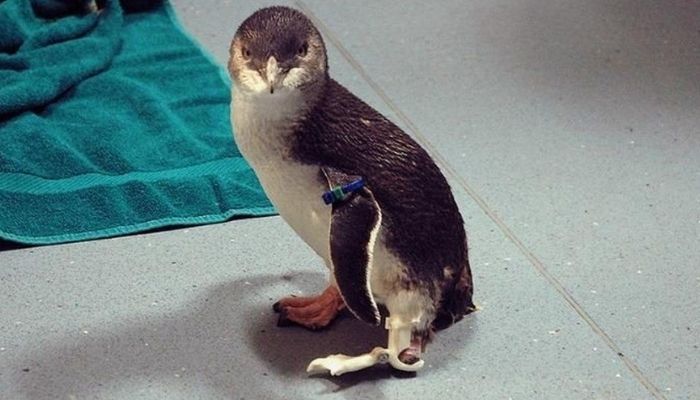 What do you think of these 3D printed prosthetics for animals? Let us know in a comment below or on our Facebook and Twitter pages! Don’t forget to sign up for our free weekly newsletter to receive all the latest 3D printing news straight to your inbox!