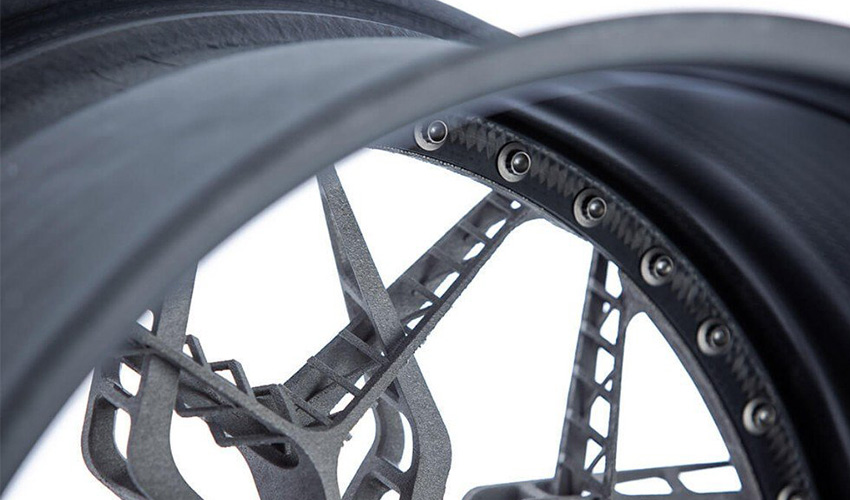 Titanium and its alloys, particularly Ti6Al4V, are of great importance in 3D printing. Titanium is a metal found in nature as an oxide, specifically rutile (TiO2) or ilmenite (FeTiO3). The extraction of pure titanium is carried out using the Kroll Method. In its basic and simplified form this consists of obtaining titanium tetrachloride (TiCl4) by chlorination at 1000ºC in the presence of carbon oxide, which is subsequently reduced with magnesium or ground sodium in an inert atmosphere at a temperature of between 800-850ºC, obtaining pure titanium. The high reactivity of titanium makes it difficult to obtain it as pure metal, so a sample with 99.9% purity is commercially classified as pure titanium. Because of this, the material is generally used in combination with other elements to form an alloy.

The main properties of titanium are its high mechanical strength, low density and excellent corrosion resistance. This makes titanium and its alloys attractive materials for several sectors including aeronautics, aerospace, and medicine among others. The only significant disadvantage of titanium is its high price. Additionally, due to the properties of its alloys, the materials have vast potential for the manufacture of parts and elements by additive manufacturing. 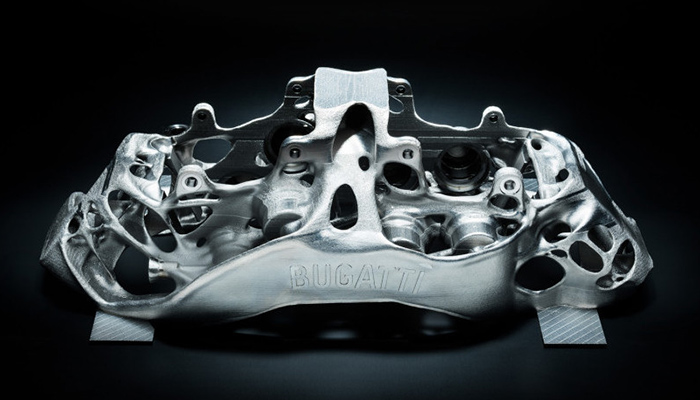 Classification and types of titanium alloys

Classification into each group depends on the elements with which the titanium is combined. The α-type alloys are dominated by α-stabilizing elements (Aluminum, Carbon, Oxygen, Nitrogen). The α-alloys have particularly low mechanical properties compared to the rest of the titanium alloys and their excellent corrosion resistance. Within this group the most commonly used alloys are: Ti3Al2.5V and Ti5Al2.5V. The β-type alloys were developed in order to improve the mechanical properties of the material. These alloys feature β stabilizers (Iron, Molybdenum, Vanadium), including Ti10.2.3, Ti555.3 and Ti17.

Finally, α + β type alloys are the most studied and contain both α-stabilizing and β-stabilizing elements, resulting in a mixed microstructure with a good combination of properties. The most widely used alloy is Ti6Al4V which occupies 56% of the total Ti market due to a balance between mechanical strength, ductility, fatigue resistance and fracture toughness. By alloy type, market utilization can be divided into 26% (α), 4% (β) and 70% (α + β). 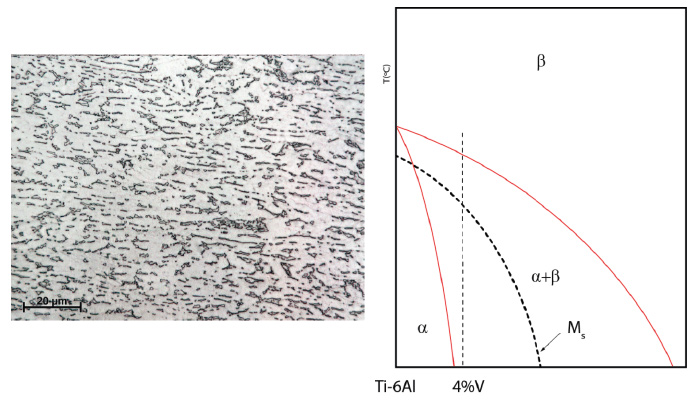 On the left an equiaxial Ti6Al4V microstructure (as-received state without heat treatment). On the right the Ti6Al4V phase diagram.

3D printing with the Ti6Al4V alloy

As in the general market, Ti6Al4V alloy is the most important alloy in 3D printing because of its high strength, low density, excellent corrosion resistance and high biocompatibility. This set of properties makes a useful material for several different industries such as automotive, aerospace, medical/biomedical, chemical or military, among others.

In order to begin the process of 3D printing parts and elements using Ti6Al4V, the alloy must first be obtained in powder form. There are two main techniques for achieving this: plasma atomization or gas atomization. Plasma atomization is used in the production of reactive material powder (Ti6Al4V). The technique consists of feeding wires of the alloy into an atomizer hopper. These are melted by a plasma welder and as the molten metal falls it solidifies creating spherical particles. Gas atomization is the most commonly used technique. In this technique the molten material is fed into a nozzle and broken up in a stream of inert gas (Ar or N). The gas stream solidifies the molten material giving rise to spherical particles that are deposited and collected at the bottom of the chamber.

The technique with which the metal powder, in this case Ti6Al4V, is manufactured is very important since it determines the particle size and the characteristics of the metal powder, which in turn, determine the properties of the final part or element. There are currently three types of commercialized Ti6Al4V: TC4 according to GB/T 3620.1-2017; Ti6Al4V grade 5; and Ti6Al4V grade 23 according to ASTM B348-13. The three types differ in particle size distribution, which limits the minimum printed layer thickness. The most commonly employed 3D printing techniques using Ti6Al4V are DMLS and SLM, depending on the type of part and its desired properties.

What do you think about titanium, it’s allows and 3D printing with Ti6Al4V? Let us know in a comment below or on our Facebook and Twitter pages! Sign up for our free weekly Newsletter here, the latest 3D printing news straight to your inbox!