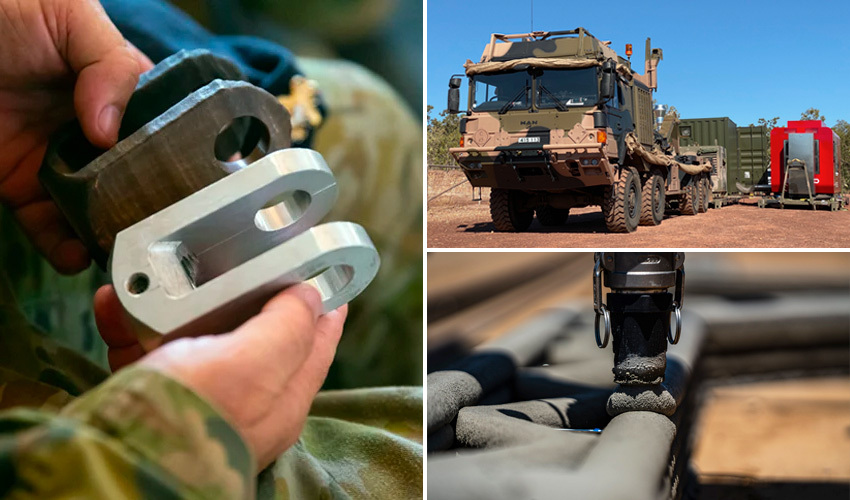 Additive manufacturing is widely used in many sectors including maritime, aerospace, and automotive. It should come as no surprise then, that it is also being increasingly adopted by the defense sector worldwide. In fact, the military 3D printing sector is expected to be worth $1.7 billion by 2027, showing the importance the technologies have. Considering that in the military speed, lighter weights, and lower costs are all paramount, additive manufacturing certainly has a role to play. We took a closer look at some of the most interesting applications for additive manufacturing in the defense sector, listed below in no particular order.

The Largest Metal 3D Printer Was Commissioned by the US Military

The U.S. military is so convinced of the benefits of additive manufacturing that last year, they announced that they would even be building the world’s largest metal 3D printer. The U.S. DEVCOM Army Ground Vehicle Systems Center is working to build the printer with the help of ASTRO America, Ingersoll Machine Tool, Siemens, and MELD Manufacturing at Rock Island Arsenal – Joint Manufacturing and Technology Center. The printer will be part of the Jointless Hull Project with the end mission being to print monolithic  (one-piece) hulls for combat vehicles. When it was announced, it was estimated that the project would take around 14 months and the end printer would be capable of printing metal parts that are 30 feet long, 20 feet wide, and 12 feet high. Though we have had no recent news on it, it is likely that the project will be finished in the near future. 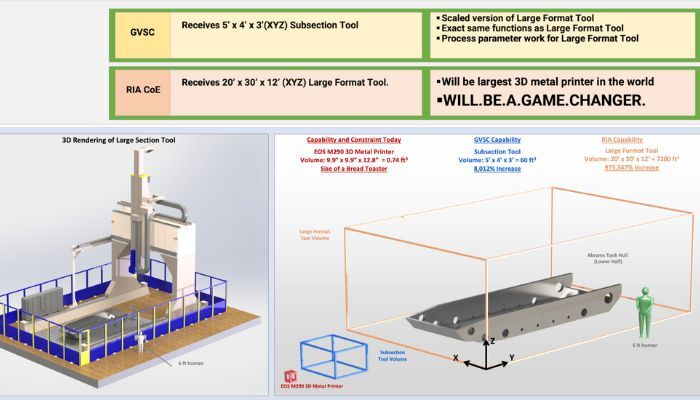 A 3D Printed Runway for the US Air Force

Another application in the military and defense sector comes from ITAMCO (Indiana Technology and Manufacturing Companies), which has developed a runway for military expeditionary airfields using additive manufacturing. These runway mats are an essential component of Expeditionary Airfields (EAF). Their function is to be implemented on weaker ground surfaces to allow military aircraft to land and take off. Before that, a portable runway made of aluminum planks was used, but as it became outdated, the army needed to find an innovative solution. The M290 3D printer from the German company EOS was used to create a much lighter and more durable model for the U.S. Air Force’s military equipment. 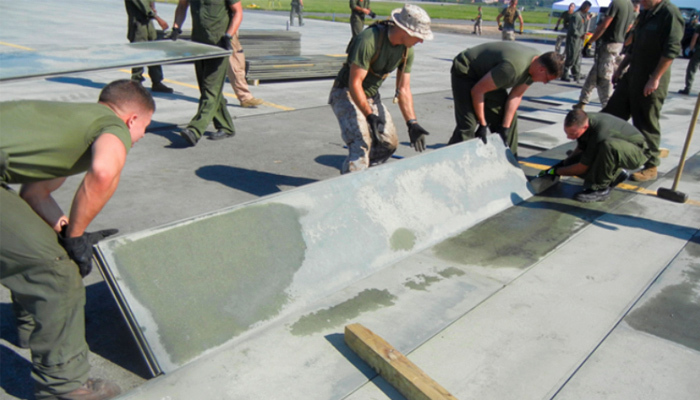 ExOne and Its Military Pods, an Innovative Application for Additive Manufacturing in Defense

With the goal of accelerating the development of strong and robust 3D printed factory pods, ExOne got involved in the realization of this task after working with several partners. Specifically, it involved a Defense Logistics Agency (DLA) contract, which was valued at $1.6 million. For the process, ExOne’s Binderjet technology was used for military use due to its speed, flexibility of materials, and ease of use to best meet the critical needs of the military. The 3D printer, designed specifically for the military, is said to be capable of binder jetting more than 20 metal, ceramic and other powder materials – in addition, the unique housing and other features are said to make it perfect for a military-grade product. 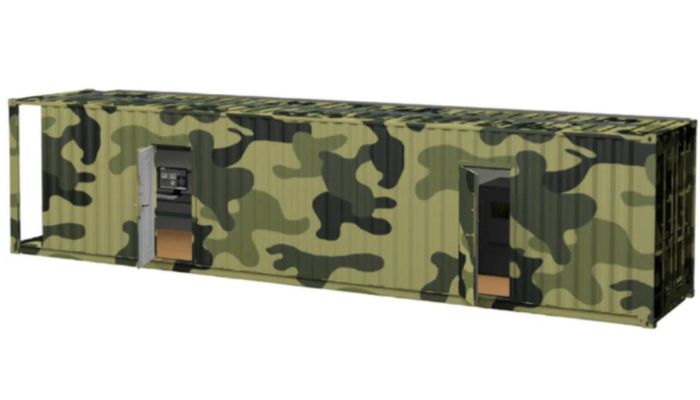 The U.S. Navy is Increasingly Turning to 3D Printed Tools

The U.S. Navy is also taking advantage of additive manufacturing. Marines have discovered the ability to produce innovative tools for their vehicle maintenance thanks to 3D printing. Specifically, this involves the Marine Corps System Command working with the Supply Battalion and industry partners to produce additively manufactured jigs for removing steering wheels from metal – a common problem that often needs to be solved in Navy vehicle maintenance! With the benefits of reduced maintenance time and increased readiness, additive manufacturing benefits greatly, especially considering that the actual wait time for such parts is around 25 days. 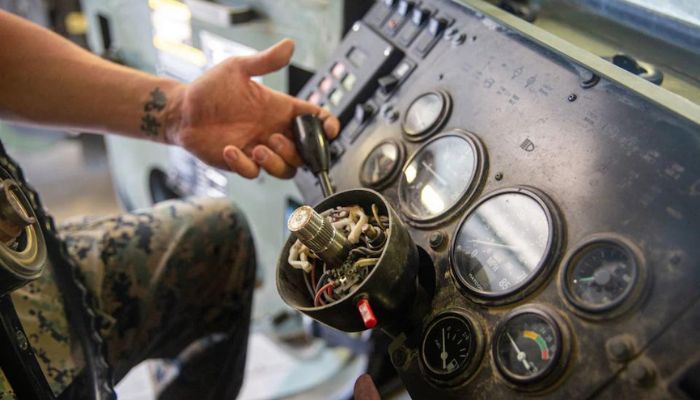 The U.S. Army’s Partnership With The University of South Florida

While the U.S. Army regularly collaborates with companies to slowly adopt technology, U.S. troops are also partnering with some universities. Recently, scientists from the University of Central Florida succeeded in 3D printing a magnesium alloy, called WE43. It is no coincidence that researchers have turned to this material. American soldiers are forced to carry extremely heavy bags and equipment, so it is now necessary to relieve them of this weight. And with the help of WE43 and the powder laser fusion process, the US Army and the University of Central Florida may have found the solution. 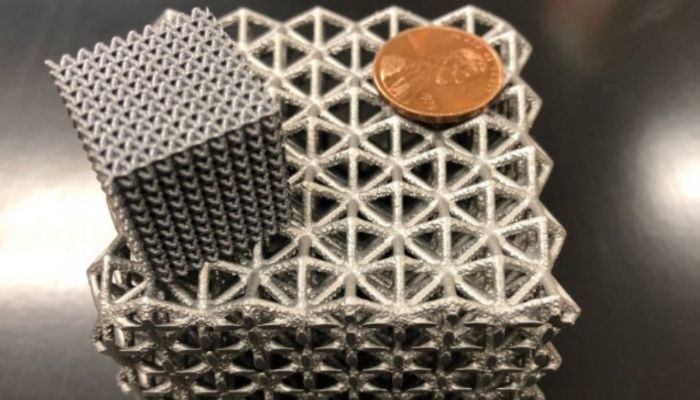 For several years now, the renowned French company Naval Group has been using 3D printing to meet a variety of needs. In 2021, thanks to additive manufacturing and more specifically to the WAAM (Wire Arc Additive Manufacturing) process, Naval Group has 3D printed a propeller. Composed of five 200 kg blades, the propeller was then fitted to the Andromeda, a mine-hunting ship. The teams behind the project explain that by using the technology they have drastically reduced the construction time and minimized the number of materials used. 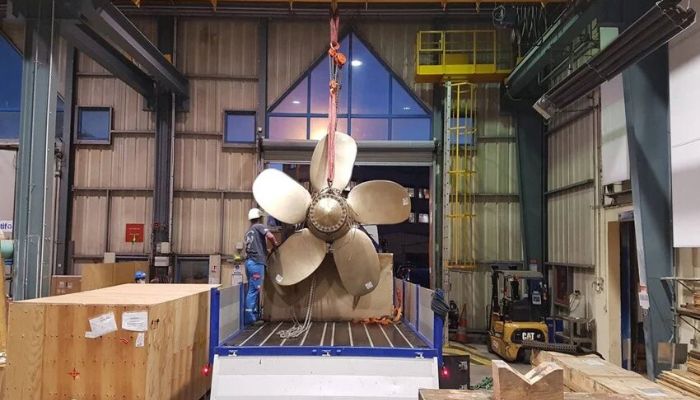 The Spanish Air Force Upgrades Its Processes With 3D Printing

Additive manufacturing provides properties of hardness, strength, and lightness in the manufactured parts. Thanks to internal fiber reinforcement, various tooling and final parts have been developed, capable of withstanding the demanding performance conditions required in a context where the components are very highly stressed, and where there can be no margin for error. In Madrid, the head of the Spanish Air Force’s helicopter workshop says that nowadays, for every part’s requirements, additive manufacturing is always valued and traditional manufacturing is avoided. Some of the parts worth mentioning are, for example, a leak control measuring tool for the helicopter’s landing gear or a customized key for the helicopter’s main rotor. 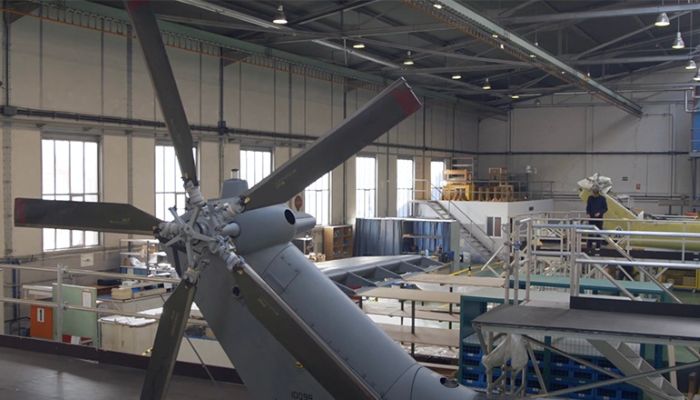 General Lattice And Its Helmets For The U.S. Army

3D design software company General Lattice and the U.S. Army have signed a contract to improve the impact absorption of the Army’s combat helmet through 3D printing and advanced lattice geometries. For this project, the company developed a set of predictive modeling tools to design and generate materials for the helmet. To improve soldier protection in the field and the likelihood of survival after suffering a head impact, the 3D printed materials will be tested in real-world environments to validate the performance requirements of the Developmental Command Soldier Center. 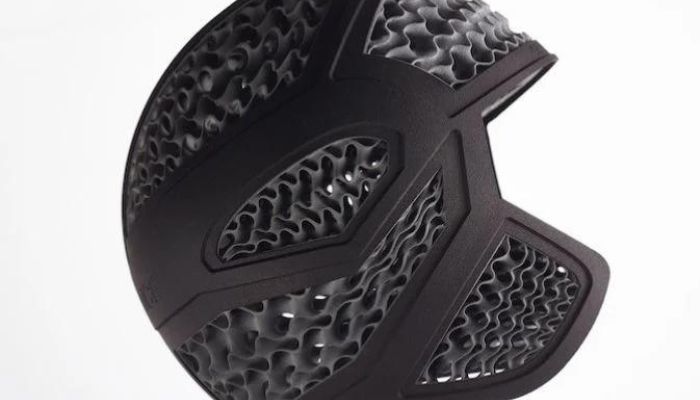 The Australian Army has used metal additive manufacturing, and in particular, solutions developed by SPEE3D, in order to design a dozen spare parts for one of its armored vehicles. These parts have been tested and certified for use in the field and certified for field use, improving the agility of the Australian Army. Among the printed components include, for example, a wheel cover that was created in just 29 minutes, with an overall cost of 100 Australian dollars. The machine used in this case is the WarpSPEE3D, which has a print volume of 1000 x 700 mm and a speed of 1 kilo per minute. By turning to additive manufacturing the army is able to reduce the downtime of its armored vehicles and thus better respond to emergency situations.

The U.S. Navy and Additive Manufacturing for the Defense Sector

The U.S. Navy has been conducting several additive manufacturing projects for many years now. The goal is to improve the agility and efficiency of the teams going on missions in the middle of the ocean, especially when it comes to manufacturing spare parts. That’s why the Naval Postgraduate School (NPS) invested in Xerox’s ElemX metal machine. It uses it to design spare parts for its submarines and ships, as well as tooling. This allows the company to have a much shorter supply chain and to manufacture custom components. NPS is not alone in launching 3D printing projects in the maritime field. Indeed, the company MatterHackers has signed a 5-year contract with the US Navy to provide all the 3D equipment it would need, as well as training sessions and maintenance. MatterHackers helped the Navy deploy Ultimaker S5 3D printers to design custom parts and other applications. 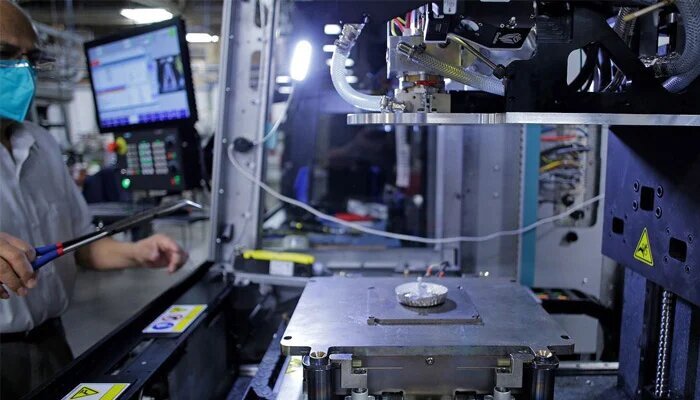 The Future Energetics Project from the UK works in the areas of research, explosives testing, novel energetics fabrication, explosion modeling, chemical synthesis, thermal characterization, and hazard testing. The goals of the project are to create new energetic materials and diagnostic methods to validate new materials. Additive manufacturing will be used to develop new explosive formulations. This offers numerous benefits to potential users, including reduced storage and transportation costs and improved performance. Charges can be precisely tailored to requirements and manufactured in novel and intricate designs, which would have been unthinkable before. The manufacturing process uses a LabRAM resonant acoustic mixer, which uses acoustic energy instead of physical blades to mix materials, making the process safer. The 3D printing project is currently still in the testing phase. 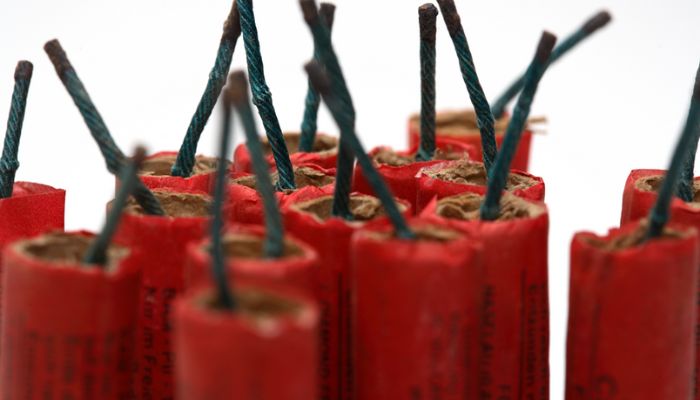 The Applied Science & Technology Research Organization, also known as ASTRO America, has been selected by the U.S. Army for the Jointless Hull Project. This program is supported by the U.S. Department of Defense’s beneficiary Institute for Manufacturing Innovation and is part of an effort to use 3D printing to develop and deliver a hull tool for combat vehicles. They hope to reduce manufacturing time and lower production costs while reducing the weight of the vehicle and increasing its performance and survivability. 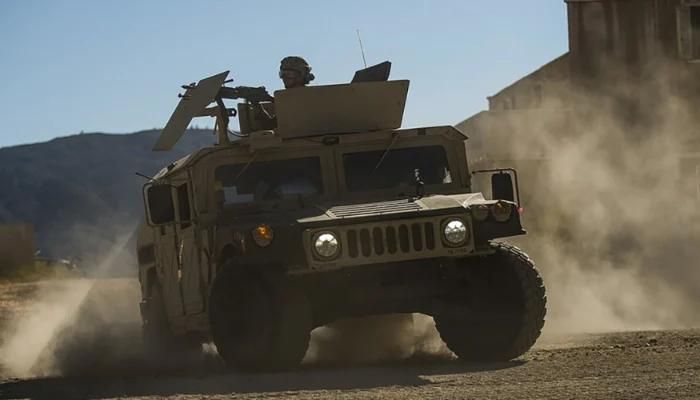 The 3D construction company ICON is already known for doing projects involving the military. For this particular one, the Austin-based company partnered with the Texas Military Department, Logan Architecture, and Fort Structures to create the largest 3D-printed structure in North America: training barracks at the Camp Swift Training Center in Bastrop, Texas. Using ICON’s Vulcan construction system, which is a tablet-operated robotic printer that works with cement-based material, the collaboration of companies and the military managed to build the first 3D-printed barracks for soldiers to live in. The final construction consists of a 3,800 sq.-ft building that is able to shelter up to 72 soldiers or airmen and prepare for their next missions! 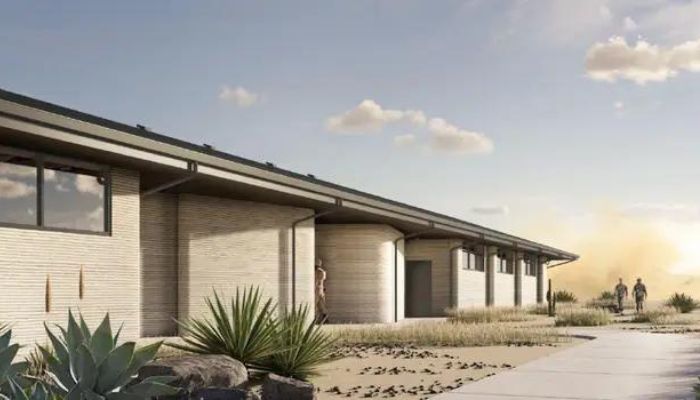 Over the years, the defense sector found ways to apply 3D printing in many areas – On the ground, in the air, and at sea. With this latest project, the US army is literally diving into a 3D printing relatively unknown area: Under the sea. For this new endeavor, Oak Ridge National Laboratory (ORNL) partnered with the U.S. Navy’s Disruptive Technology Lab to help create a 3D-printed submarine hull, the first in military history. By using ORNL’s FDM Big Area Additive Manufacturing (BAAM) technology, the team produced a 30-foot concept hull with 6 carbon fiber composite material sections, which was produced faster and cheaper than it would have been using traditional manufacturing methods. Although still in testing, the signs are good that there will be more 3D-printed submarines diving through the oceans soon. 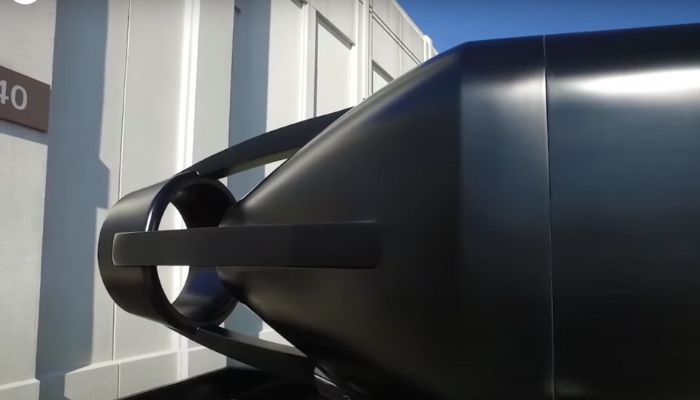 What do you think of these examples of applications for additive manufacturing in the defense sector? Let us know in a comment below or on our LinkedIn, Facebook, and Twitter pages! Don’t forget to sign up for our free weekly Newsletter here, the latest 3D printing news straight to your inbox! You can also find all our videos on our YouTube channel.