Thangs, the new most powerful search engine for 3D models? 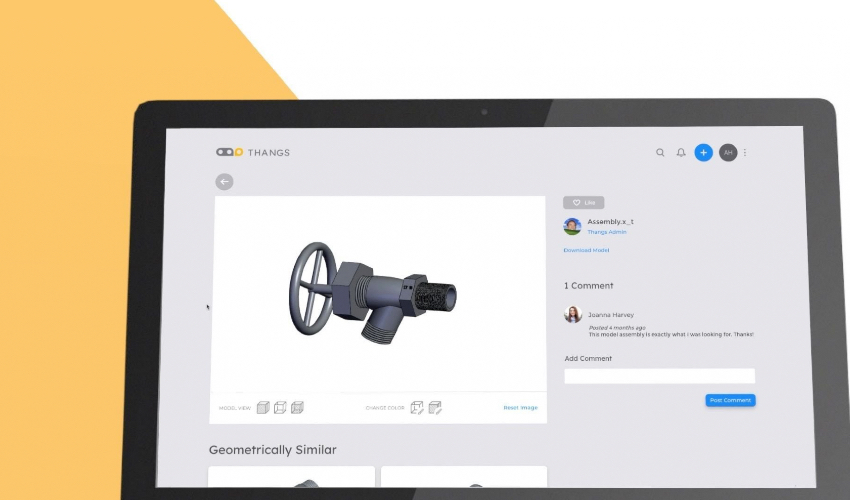 Physna has just announced the launch of Thangs, the world’s first geometric search engine for 3D models. Just a couple of days after its release, the platform is already deemed the most powerful online community for 3D model creators. Physna, being the industry leader in geometric deep-learning technology, wanted to “democratize” the world of 3D models and create a global index of physical objects. Hence, the company integrated its proprietary artificial intelligence algorithms into Thangs – which is free to join – in order to revolutionize the 3D printing workflow. So, what is special about Thangs?

Founded in 2015 by Paul Powers and Glenn Warner, Physna uses proprietary algorithms and advanced geometric deep-learning technology to codify 3D models into detailed data. The resulting digitized model allows Physna to show specific and precise differences and similarities between models, including incomplete models or models with different file formats. It enables the users to see all components in complex assemblies, as well as parts contained in other parts! Physna’s AI technology allows to quickly make production predictions, estimate costs, materials, and find the best suppliers. The software can predict part performance based on past data and design changes, and uncover design flaws before models are produced. The powerful technology behind the software attracted important people to join the team – this summer, Dennis DeMeyere, a former technical director at Google Cloud,  and Jason Warner, GitHub’s CTO, joined the company. With such experienced people on board, Physna is planning to integrate major functionality features from these two tech giants, Google and GitHub, into its very own platform; on the 18th of August, the company has officially released its 3D model community platform, Thangs. 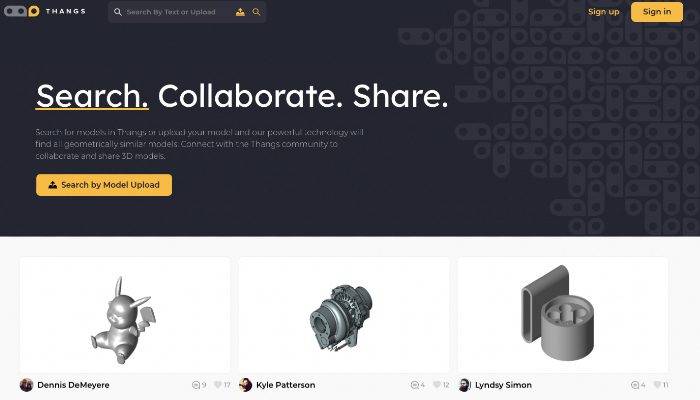 There is no Google for the world of 3D models, making the process of finding files rather tedious, and neither did we have a GitHub for 3D models, making version control quite complex and collaboration unintuitive. Thangs solves those problems. What Google has done in indexing 2D data such as text and images, Thangs is doing for physical objects and 3D models. The platform allows users to find parts based on their (potential) relationship to other parts. Powered by Physna’s geometric deep-learning engine, it can read and understand the “physical DNA” of objects in ways that were previously impossible. By understanding the physical structure of 3D models across a variety of file types, Thangs reveals in-depth information about 3D designs, including complex assemblies and parts within parts.

At first glance, Thangs might look quite like Thingiverse or any other 3D model database. It does allow the users to search every publicly available 3D model database. But in addition, it also shows you a graphical, collaborative history of every single model, and can tell you if a model is actually part of another model. At its launch, the platform already had more than one million indexed 3D models, and many more are to come in the nearest future. 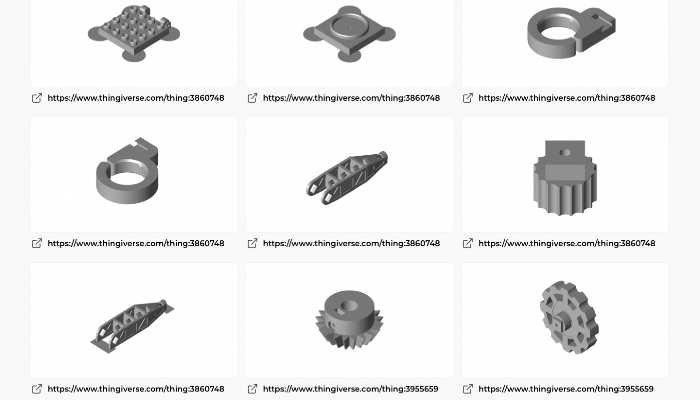 Furthermore, Thangs introduces collaboration tools to make it easier than ever for 3D designers, both professional and amateurs, to join forces with others and work on models together. Shared folders automate version control and bring clarity to complex collaborations. Just like on a social platform, Thangs users can comment on 3D models, “like” models to save them to their profile and receive notifications when other users interact with their own designs.

“Thangs is Physna’s first open product, but it uses some of the same powerful technology at the core of our enterprise offerings,” said Paul Powers, CEO of Physna. “Our enterprise product is widely recognized as the technological leader in 3D search and analysis, and we’re democratizing some of its capabilities through Thangs. This product is built to be powerful enough for a leading aerospace CAD engineer, yet simple enough for literally anyone to use. Reality is three-dimensional, and it’s time for the digital age to be as well. Thangs gives everyone not only access to 3D data, but utility from it as well using some of the most cutting-edge technology available today.” You can check out the platform HERE.

Do you think Thangs will soon become the Google for 3D models? Are you willing to join its community? Let us know in a comment below or on our Facebook and Twitter pages! Sign up for our free weekly Newsletter, all the latest news in 3D printing straight to your inbox!