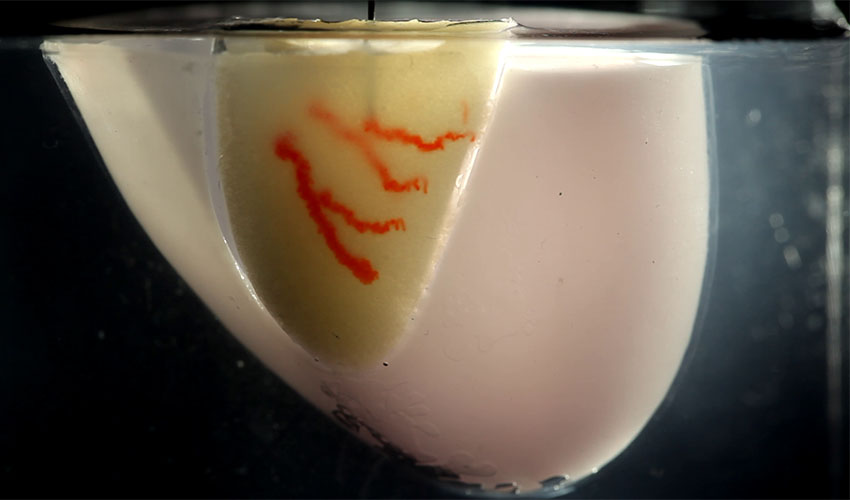 At Harvard, a group of researchers are developing a solution that will bioprint blood vessels on living tissues. Their paper ‘Biomanufacturing of organ-specific tissues with high cellular density and embedded vascular channels’ published in Science Advances, highlights a new technique called SWIFT (Sacrificial Writing Into Functional Tissue). Their solution could enable the creation of larger organs that could deliver oxygen effectively.

Scientists around the world have been working on growing organs for many years. One issue is that lab-grown organs are often too small for human use and are not sophisticated enough to deliver oxygen to our bodies. Things are changing, not too long ago a team of researchers 3D printed a small human heart in Israel, showcasing the enormous potential of bioprinting technologies for this field.  It’s true that bioprinting is very promising for the creation of human organs, but it has to be said that we are still at the beginning stages of this pursuit.

Today, it’s 20 people that die everyday waiting for an organ transplant in the United States, and while more than 30,000 transplants are performed annually, there are over 113,000 patients currently on organ waitlists.

SWIFT, created by researchers from Harvard’s Wyss Institute for Biologically Inspired Engineering and John A. Paulson School of Engineering and Applied Sciences (SEAS) is a technique that 3D prints vascular channels into living matrices composed of stem-cell-derived organ building blocks (OBBs). To explain the importance of this new process, co-first author Mark Skylar-Scott says: “Rather than trying to 3D print an entire organ’s worth of cells, SWIFT focuses on only printing the vessels necessary to support a living tissue construct that contains large quantities of OBBs, which may ultimately be used therapeutically to repair and replace human organs with lab-grown versions containing patients’ own cells.”

In other words, this technique is a two-step process, the first step being the formation of a dense living matrix of OBBs. “Forming a dense matrix from these OBBs kills two birds with one stone: not only does it achieve a high cellular density akin to that of human organs, but the matrix’s viscosity also enables printing of a pervasive network of perfusable channels within it to mimic the blood vessels that support human organs,” explains co-first author Sébastien Uzel. 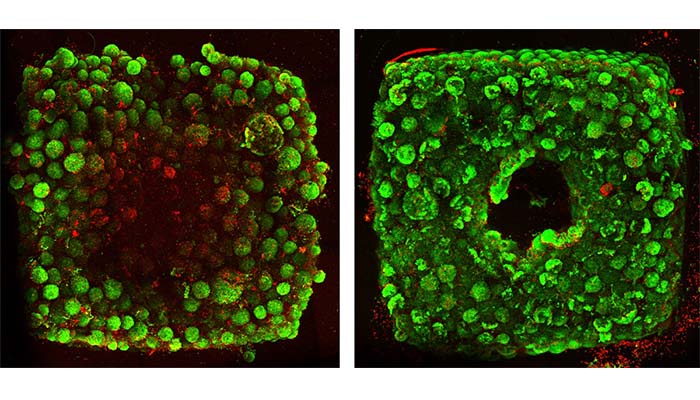 At cold temperatures, the matrix has the perfect consistency. In other words, it is soft enough to manipulate without damaging the cells, but thick enough to hold its shape, making it the perfect medium for sacrificial 3D printing. In this technique, a thin nozzle moves through this matrix depositing a strand of gelatin-like ink that pushes cells out of the way without damaging them. Then, as the cold matrix is heated to 37°C it starts to stiffen to become more solid-like. The gelatin ink on the other hand melts and can be washed out. This leaves behind a network of channels embedded within the tissue construct. The diameter of the channels can vary between 400 micrometers to 1 millimeter. The key is that these channels can be perfused with oxygenated media to nourish the cells.

When the scientists tested this they noticed that organ-specific tissues that were printed with embedded vascular channels using SWIFT remained viable, while tissues grown without these channels experienced cell death within 12 hours. One of the most promising tests involved testing whether the tissues displayed organ-specific functions. The team printed, evacuated, and perfused a network of channels into a matrix consisting of heart-derived cells and flowed media through the channels for over a week. “During that time, the cardiac OBBs fused together to form a more solid cardiac tissue whose contractions became more synchronous and over 20 times stronger, mimicking key features of a human heart.”

Very promising research indeed. You can find the paper HERE.

What do you think of the SWIFT technique? Let us know in a comment below or on our Facebook and Twitter page! Don’t forget to sign up for our free weekly Newsletter, with all the latest news in 3D printing delivered straight to your inbox!