What are the business benefits of support-less metal additive manufacturing?

We ask the question because in the most widely used metal AM process, laser powder bed fusion, unlike polymer powder bed fusion (also known as SLS), metal parts are attached to the build platform through support structures. And these support structures add considerable design and manufacturing constraints. They are built using the same material as the part and are essential to mitigate the warping and distortion that may occur due to the high processing temperatures. The metal additive manufacturing solution provider, VELO3D, has developed a support-less technology to further optimize time, cost and quality of metal parts. In fact, the company has been enabling engineers to produce parts that were previously impossible to manufacture using traditional methods. 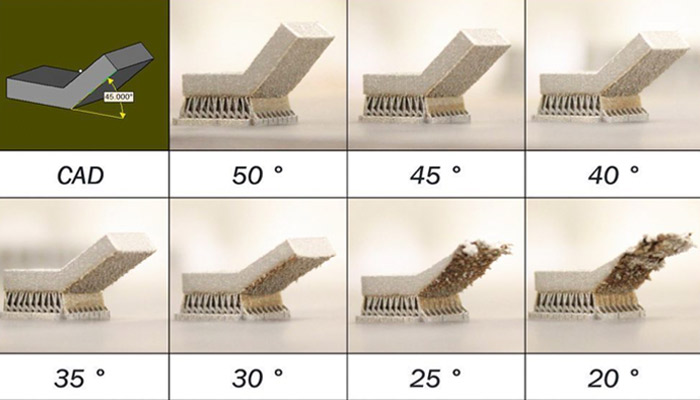 Existing metal AM machines today require angles less than 45 degrees to have support structures. As the angle decreases, the downward facing surface becomes rough and eventually the part will fail if the angle is reduced too far | Credits: Protolabs

Support structures are necessary in 95% of metal additively manufactured parts, as estimated by Protolabs. Essentially, they are required for all angles less than 45 degrees. Under 45 degrees, they offer a suitable platform for the next layer to be built upon, they anchor the part to the build plate, they prevent warping and also help draw heat away, allowing the part to cool at a more controlled rate. If they are not included, as the angle decreases, the downward-facing surface will become rougher and eventually the part will fail if the angle is reduced too far.

VELO3D’s support-less technology aims to have a deep impact on the type of parts you can create. Repeatability and reliability are hard to control when you have to remove supports using machining before introducing further post-processing steps to achieve the desired quality. Since this is a manual process, the scrap rate is higher than in a process that would not require these steps. Michael Corliss, VP Technology for Knust–Godwin, who uses VELO3D’s technology explains: “Using support-free building reduces the human element so it increases our reproducibility. The support removal is such a manual process and it is very, very hard to control.” 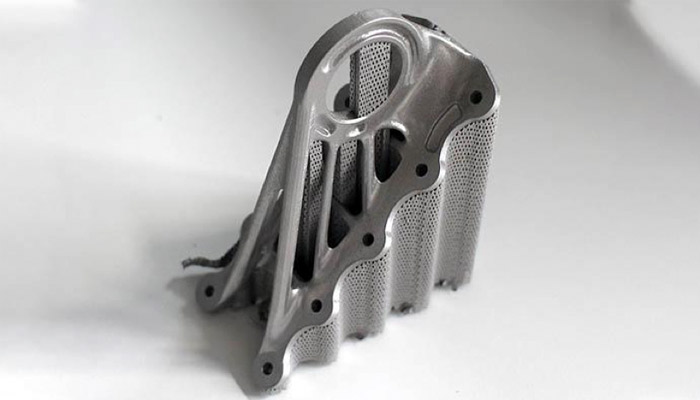 A metal bracket before support removal. The supports are made of the same material as the part and will need CNC machining to be removed | Credits: Concept Laser

Often times support structures are the root cause of production concerns such as build failures and poor part quality. The design of a part may need to be altered multiple times to prevent these issues. The positive impact of getting rid of support structures is greatest on parts with internal passageways or cavities. David Bentley, Senior Manufacturing Engineer for 3D printed metals at Protolabs has used VELO3D’s technology and clarifies that the most problematic parts are, “any parts with inlets, outlets, and manifold-like structures between these points of accessibility.”

If we take the case of an impeller, the supports are very difficult to remove and will require some CNC machining steps. Even though there is a strong demand for these types of parts, it has been difficult to satisfy because of the support structure challenge. Other examples of parts or part features commonly impacted by support structures are manifolds, heat exchangers, and conformal cooling channels. Parts such as these illustrate the limitation of printing with metal additive manufacturing today.

VELO3D’s free-floating technology has been developed to answer these issues and bring down the cost, lead times and design limitations associated with adding support structures. Just as its name suggests parts are printed free-floating in powder, meaning that more parts can be built on the same build plate as they are not attached to it. Taking the case of high-pressure turbine blades, the manufacturer ensures it can build up to 441 parts per build compared to 85 parts per build on other systems. Additionally, post-processing steps are greatly reduced. The company provides an end-to-end solution for metal AM which includes its 3D printing system called Sapphire, working alongside its Flow software and quality assurance & control system, Assure.

To hear what other metal AM experts have to say about the business benefits of a support-less process, download the whitepaper authored by Todd Grimm HERE. Contributors include Protolabs, Incodema3D, Stratasys Direct, Knust-Godwin, Interstellar, and Hanwha.

What do you think of VELO3D’s support-less metal additive manufacturing technology? Let us know in a comment below or on our Facebook and Twitter pages! Sign up for our free weekly Newsletter, all the latest news in 3D printing straight to your inbox!