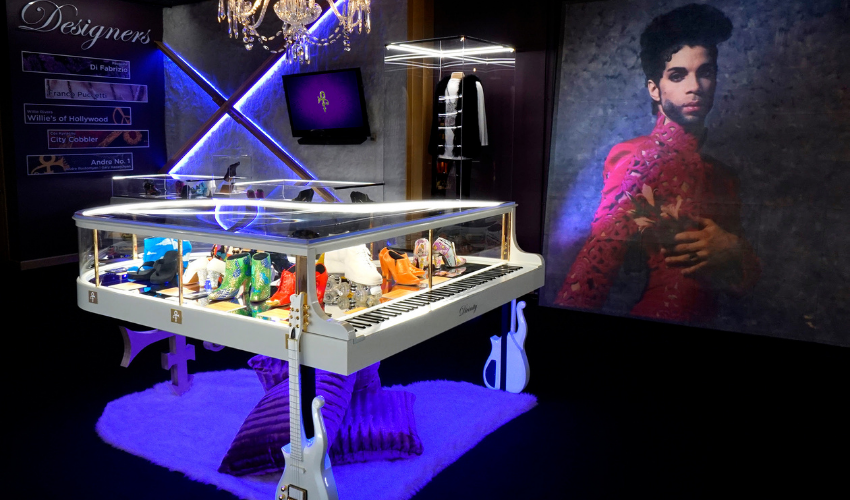 This past summer, we informed you of Stratasys‘ involvement in the Prince shoe tribute that would be on display in an exhibition at the legendary musician’s recording complex. The exhibition has been extended through 2022, so if you happen to be near Minnesota, you can view a special exhibition, called “The Beautiful Collection“, at Paisley Park featuring 300 pairs of Prince’s quintessential shoes displayed in one-of-a-kind 3d-printed display units by global AM leader Stratasys, which itself was founded in Minnesota in 1989; though now the company is headquartered in Israel. For the Paisley Park curators, it was immensely important to highlight the shoes in a unique way that highlighted the shoes as an extension of Prince’s personality.

Modeled after Prince’s very own cabinets, the guitar and baby grand piano were each retrofitted as 3D-printed display cases. The grand piano display case features legs designed to replicate Prince’s famous Cloud Guitar. In total, the unit is made of 45 individual pieces which were 3D-printed using both fused deposition modeling (FDM) and PolyJet technologies. The guitar especially is important as it is representative of the “love symbol” that the artist changed his name to in 1993. “The level of 3D printing innovation on display at Paisley Park is incredible,” said Pat Carey, Senior Vice President of Strategic Growth for Stratasys. “In everything we created for this exhibit, we pushed the boundaries of our technology. In addition to being able to showcase and compliment Prince’s shoes through the creation of these amazing 3D printed pieces, we can also highlight how 3D printing can be utilized beyond its typical use cases.” 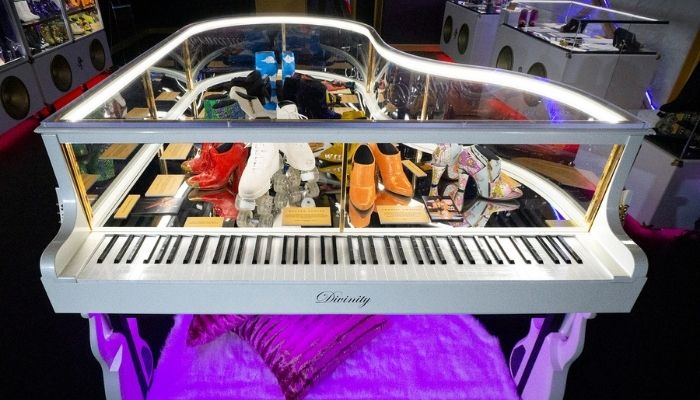 For this exhibition, Stratasys also produced a 9’ x 9’ image of the legendary artist, which the company claims is the largest 3D printed canvas. The canvas image consists of 56 pieces of white denim upon which an estimated 347,000 unique PolyJet dots were deposited. PolyJet 3D technology is interesting in that it is probably the most similar to traditional 2D printing of all the other available 3D printing technologies. Also known as material jetting, the process of depositing hundreds of micro-droplets of ultraviolet light-sensitive polymer resin is then hardened by curing, similar to the stereolithography process. This process is especially attractive for applications in the movie industry and the arts because while objects made with Polyjet resin are often not strong enough for industrial purposes, multiple colors and materials can be used in a single part, which is a rarity in 3D printing. Stratasys is especially known for this technology, having acquired the originators of the process in 1999. Although PolyJet 3D printed onto fabric has been done before by Stratasys, this is the largest application of the technology.

Replication of Prince’s Cloud Guitar required 9 hours of print time with an additional 50 hours of post-processing. All structural components were printed using Nylon12 Carbon Fiber and the non-load-bearing aesthetic enhancing covers were printed in ASA Black material. The Stratasys F900 3D printer and Stratasys Fortus 450 3D printer were employed for this Paisley Park project. The piano keys were printed using PolyJet technology on the Stratasys J850 3D printer using VeroUltra White and VeroUltra Black materials, which impressively no paint was required to finish the keys. In all, the guitar and piano were printed over the course of about 751 hours. To accomplish the task, Stratasys used a total of 40.1 lbs (18.2 kg) of PolyJet resin, and 2,150 cubic units of FDM material. The canvas project alone required 76 hours of continuous printing. If you are interested in seeing the canvas and the instruments (as well as the collection of Prince’s shoes), you can buy tickets to see the exhibition HERE. 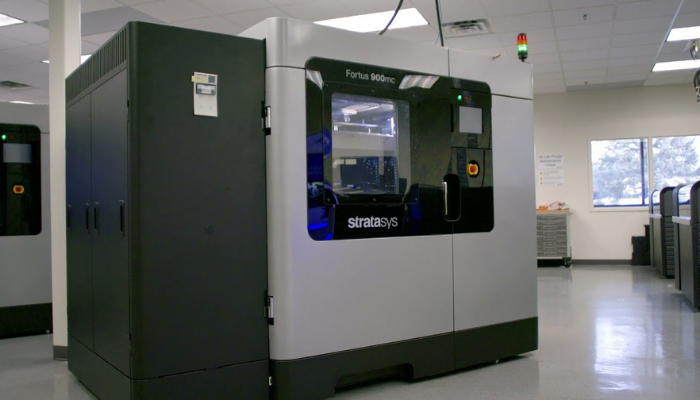 What do you think of the display work done by Stratasys for Paisley Park?  Let us know in a comment below or on our Linkedin, Facebook, and Twitter pages! Don’t forget to sign up for our free weekly Newsletter here, the latest 3D printing news straight to your inbox! You can also find all our videos on our YouTube channel.