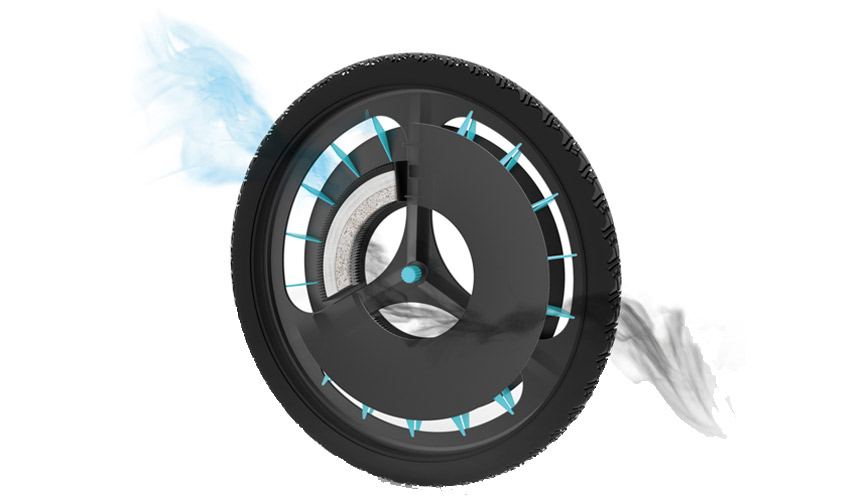 People switching from cars to bicycles is already an important step towards cleaner air, especially in big cities, where the pollution is reaching alarming levels. But what if we could take it a step further? What if your bicycle could actually help reduce pollution by purifying the air around it? London-based industrial designer,  Kristen Tapping, invented just that! She designed Rolloe, a wheel that consists of three different filters that are capable of purifying the air from pollutants. Several parts of the innovative wheel are 3D printed. Using ABS, nylon and stainless steel, Kristen has developed 600 x 600 x 600 mm wheel prototypes, and hopes it will help reduce pollution in our cities.

Concerned about environmental issues, Kristen Tapping pointed out all the sources of pollution that can exist in our cities, sharing statistics that are not reassuring for our planet. For example, road transport is said to be responsible for 70% of nitrogen dioxide emissions and 30% of hazardous particulate matter in the air. A number of governments are reacting to this major problem by creating designated lanes for cyclists or by offering bicycles, electric or not, for city dwellers to rent. Recently, we saw how additive manufacturing has a major role to play in cycling, making it possible to build more efficient and comfortable two-wheeled vehicles, using less material and reducing logistical delays and transport. In the case of Rolloe, we see that 3D printing technology can also be used to purify the air via bike wheels. 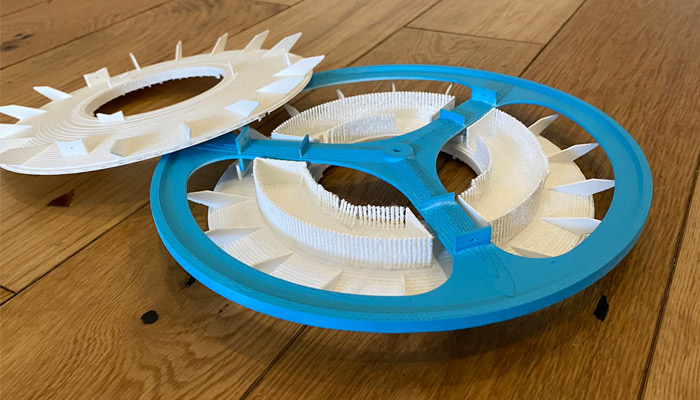 Rolloe, a project to benefit the environment

The Rolloe wheel is composed of different parts that can be made with 3D printing or injection molding. It integrates two rims with ABS fins and a nylon disc, two thermoplastics that are highly resistant to shocks. To fabricate the axle, stainless steel was used. Inside the rim, the designer placed three different types of filters: the air is channeled through the inner cylindrical opening of the rim, then filtered and finally expelled through the outer fins. Air purification could be done at a rate of 0.665 m³ per kilometer.

Kristen explains the different roles of the filters: “The first is a natural loofah sponge that traps large particles. It is washable, reusable and 100% biodegradable. Then there’s a HEPA filter, which can also be washed, which traps pollen and some large particles such as dust. Finally, the third filter is an activated carbon filter to trap individual gas molecules. It is therefore ideal for filtering volatile organic compounds (VOCs) and even odors.” The young designer specifies that the filters will have to be changed every 250 km or so. 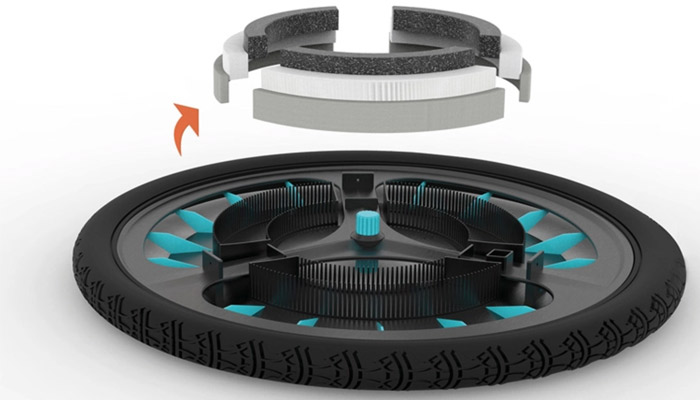 Three filters are inserted in the rim to retain air pollutants.

For the moment, Rolloe is still in the test phase and has to try different filtering methods. However, Kristen has already done her calculations: if all Santander bikes are equipped with such wheels in London (the London bike-sharing system), we could filter 79,865 m3 of air, that is 4 times the size of Trafalgar Square! Eventually, the idea would be to equip Rolloe with a tracking device to locate the bike and calculate the distance traveled in real time, but also to share its journeys with its community, track the amount of air filtered, etc. This way Kristen hopes to create a social commitment and make city dwellers aware of pollution problems. You can find more details about the project HERE.

Do you think that air purifying bike wheels, such as Rolloe, will be widely used in the future? Let us know in a comment down below or on our Facebook and Twitter pages! Don’t forget to sign up for our free weekly Newsletter, with all the latest news in 3D printing delivered straight to your inbox!