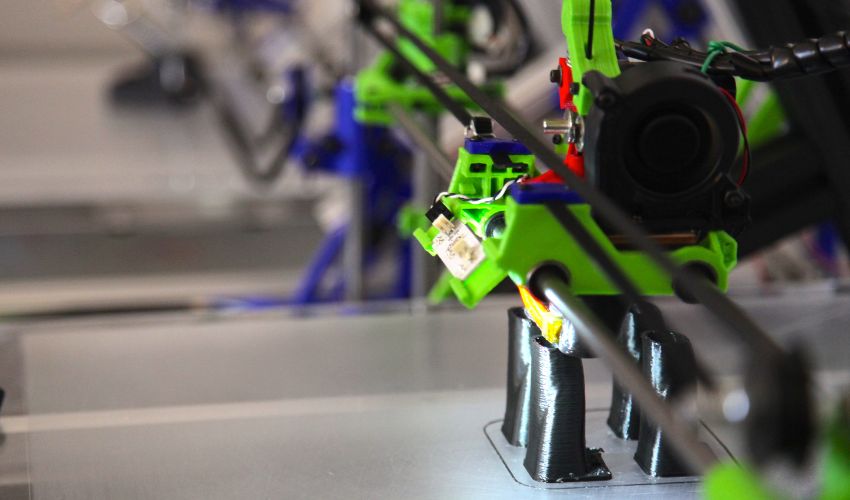 In a new study, researchers from Rutgers University have outlined what they claim to be a much faster and more precise FFF 3D printing process. The approach is named Multiplexed Fused Filament Fabrication (MF3) and involves a single gantry and a series of small nozzles rather than the single large nozzle traditionally used in FDM. Thanks to this, the authors claim that that they have been able to 3D print large and complex parts at a fraction of the cost of other 3D printing methods. Additionally, the method is notable for not only allowing them to significantly decrease printing time but also increase both printing resolution and size of parts.

The MF3 printing process was published in the research paper “Scalable, flexible and resilient parallelization of fused filament fabrication: Breaking endemic tradeoffs in material extrusion additive manufacturing” written by Jeremy Cleeman, Alex Bogut, Brijesh Mangrolia, Adeline Ripberger, Kunal Kate, Qingze Zou and Rajiv Malhotra. Within, the researchers explain that the MF3 technology works by printing concurrently with multiple FFF extruders without controlling each extruder motions individually. This is made possible by “using a new toolpath strategy that is rooted in our discovery of continuous filament retraction and advancement.”

An abstract showing how the MF3 process works as well as the resulting prints (photo credits: Rutgers University)

The Importance of Software for the MF3 Process

One of the keys behind the successful of this new MF3 process is thanks to the software behind it. The researchers have developed their own slicer software in order to optimize the movement of the gantry arm. Furthermore, the software is capable of detecting which nozzles should be turned on or off for the greatest efficiency while printing. This  also has as secondary benefit of potentially allowing for less down time for the printer. When a nozzle is clogged or not working, the software can turn it off and focus on other nozzles. In printers with just one nozzle by contrast, it would be necessary to turn off the machine.

Additionally, these advancements have allowed the researchers to overcome the so-called throughput-resolution tradeoff, or the speed at which a 3D printer deposits material versus the resolution of the final part. Up until now, users have struggled as larger-diameter nozzles allow for significantly faster printing but poorer resolution. On the other hand, smaller nozzles allow for much higher resolution and the ability to be more detailed, yet the process is slower. By increasing the number of nozzles and optimizing how they are used, rather than focusing on parallelization in which printheads concurrently print sections of a part, the MF3 process has enabled researchers to entirely bypass this issue, breaking the throughput-resolution tradeoff without needing to take existing cost/geometry limitations into account.

Jeremy Cleeman, a graduate student researcher at the Rutgers School of Engineering and the lead author of the study on the MF3 process, concluded, “We have more tests to run to understand the strength and geometric potential of the parts we can make, but as long as those elements are there, we believe this could be a game changer for the industry.”

What do you think of the MF3 3D printing process? Let us know in a comment below or on our LinkedIn, Facebook, and Twitter pages! Don’t forget to sign up for our free weekly Newsletter here, the latest 3D printing news straight to your inbox! You can also find all our videos on our YouTube channel.