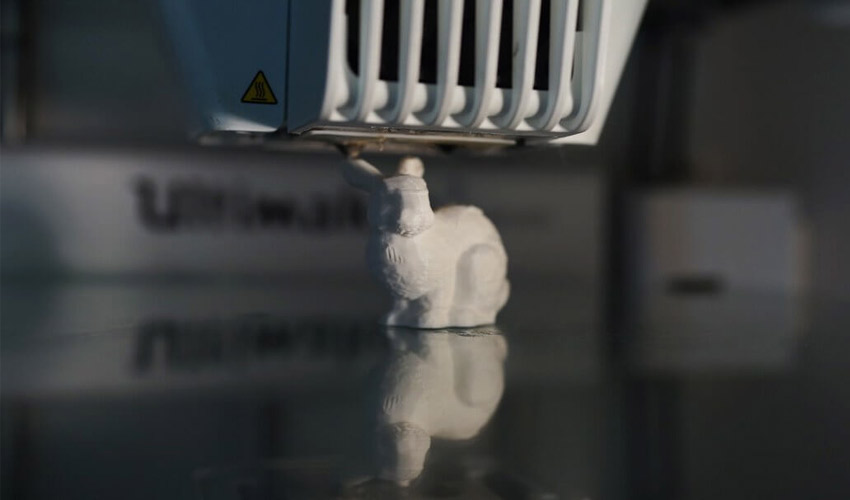 What if you could 3D print a DNA sequence? This is the idea behind this white rabbit, designed by researchers at ETH Zurich and an Israeli DNA storage company, Erlich Lab. They 3D printed a Stanford rabbit and incorporated all the instructions to reproduce it later: no more need for CAD files, STL, or other digital formats. The rabbit is said to contain about 45 kilobytes of information on how to print it, incorporated into tiny glass beads, which in turn would be integrated into the plastic used.

3D printing already had a significant impact on the storage of our objects, allowing us to create on demand, wherever we are, thanks to 3D files. The research work of this team goes further since all the data in the object itself. A particularly interesting advance over time: you might think a rabbit is not very interesting in itself, but imagine if we could do that with works of art, drugs, buildings, etc. The possibilities are wide; the teams add: “You can imagine a system where everything is labelled with small pieces of useful information.”

Integrate the rabbit’s DNA into the part

The researchers explain that they used the four nitrogenous bases of DNA (adenine (A), cytosine (C), thymine (T) and guanine (G)) to code the instructions necessary for 3D printing of the rabbit; DNA sequencing can then be synthesized. As the latter is extremely fragile – its deterioration is faster than we think – a solution had to be found to protect it. That is why the researchers locked him in microscopic glass beads that were themselves incorporated into the manufacturing plastic. The printing process could then begin on an Ultimaker machine.

Once the printing step was completed, the teams tested their work by cutting a piece of the rabbit’s ear off, taking care to isolate the DNA. They then used a DNA sequencing machine to decrypt the sequence, which was then translated into instructions for the 3D printer. The sequence becomes the STL file! The researchers explain: “Our results show that data can be perfectly and quickly recovered from the 3D object by consuming a minute amount of material using a portable sequencer.” This operation has been repeated 4 times, proof that there is no degradation of the information and that it is possible to duplicate a part without its 3D file. It would be interesting to reproduce these steps 10 years later to see if time is not an obstacle to this progress.

The applications of such work are very broad, and researchers explain that they have certainly not thought of everything! One of the examples they take is the ability to hide information in an object; it could be confidential data that you want to protect without necessarily going through a complex coding system. In any case, we look forward to seeing how this project will evolve!  You can find the entire study on Nature Biotechnology.

What do you think of this research? Let us know in a comment below or on our Facebook and Twitter pages! Sign up for our free weekly Newsletter, all the latest news in 3D printing straight to your inbox!