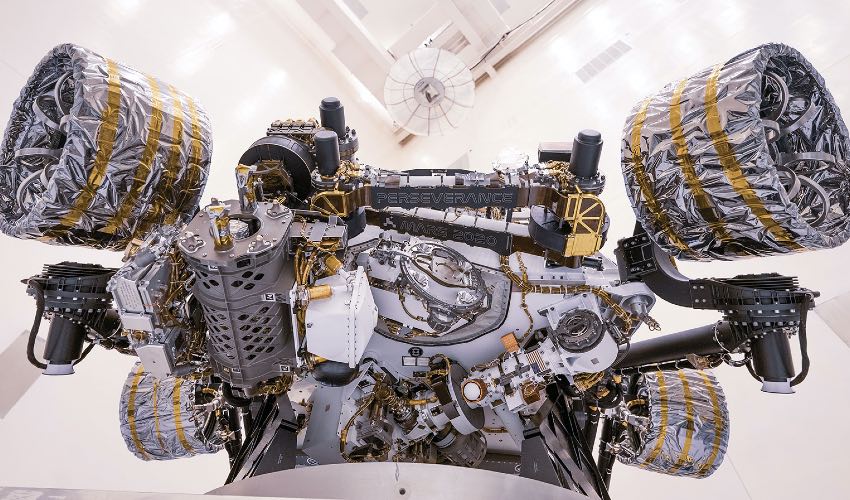 The National Aeronautics and Space Administration, NASA, has been investing in 3D printing technologies for several years, by both manufacturing parts in-house and awarding contracts worth millions of dollars to external companies and institutions. Some of the examples include the rocket engine with 3D printed parts, using Relativity Space‘s 3D printed rocket as launch vehicle for the Artemis exploration program, or financing ICON to additively manufacture infrastructure on the Moon. Recently, NASA has revealed that its Perseverance rover carries as many as eleven 3D printed metal parts on its mission to Mars. To develop the 3D printed components, NASA worked with its Jet Propulsion Lab (JPL) at California Institute of Technology.

Interestingly, Perseverance is not the first rover bound for Mars that features 3D printed parts. The first one was called Curiosity: back in 2012, it landed on Mars with a 3D printed ceramic part inside its Sample Analysis at Mars (SAM) instrument. NASA has since continued to test 3D printing for use in spacecraft to make sure the reliability of the parts is well understood. While eight years later, in 2020, the number of 3D printed parts on NASA’s Mars-bound rover has increased from 1 to 11, they are still secondary structures, which means that these parts wouldn’t jeopardize the mission if they didn’t work as planned. Yet, as Andre Pate, the group lead for additive manufacturing at NASA’s JPL said, “Flying these parts to Mars is a huge milestone that opens the door a little more for additive manufacturing in the space industry.“ 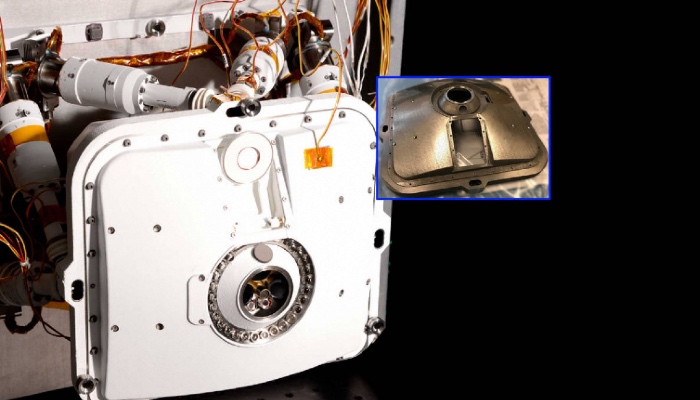 The outer shell of PIXL, one of the instruments aboard NASA’s Perseverance Mars rover, includes several parts that were made of 3D printed titanium. (Image credits: NASA/JPL-Caltech)

Of the 11 3D printed parts going to Mars, five are in Perseverance’s PIXL instrument. Short for the Planetary Instrument for X-ray Lithochemistry, the device will help the rover seek out signs of fossilized microbial life by shooting X-ray beams at rock surfaces to analyze them. To make the instrument as light as possible, the JPL team designed PIXL’s two-piece titanium shell, a mounting frame, and two support struts that secure the shell to the end of the arm to be hollow and extremely thin. In fact, the parts, which were 3D printed by a vendor called Carpenter Additive, have three or four times less mass than if they’d been produced conventionally! “In a very real sense, 3D printing made this instrument possible,” said Michael Schein, PIXL’s lead mechanical engineer at JPL. “These techniques allowed us to achieve a low mass and high-precision pointing that could not be made with conventional fabrication.”

Perseverance’s six other 3D printed parts can be found in an instrument called the Mars Oxygen In-Situ Resource Utilization Experiment, or MOXIE. This device will test technology that could potentially produce industrial quantities of oxygen to create rocket propellant on Mars, helping astronauts launch back to Earth. Within the device are six heat exchangers – nickel-alloy plates that protect key parts of the instrument from the effects of high temperatures. These kinds of nickel components are called superalloys because they maintain their strength even at very high temperatures; they are usually   found in jet engines or power-generating turbines.

The rover is currently in space and will land on Mars on February, 18, 2021. Its key objective is to search for signs of ancient microbial life. Perseverance will characterize the Red Planet’s geology and past climate, paving the way for human exploration. 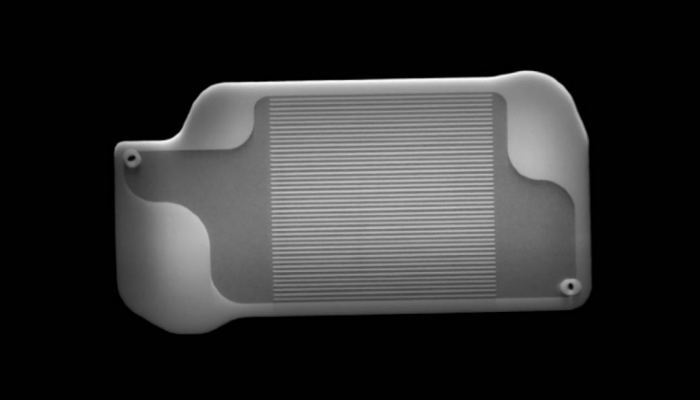 The X-ray image shows the interior of a 3D printed heat exchanger in Perseverance’s MOXIE instrument. X-ray images like these are used to check for defects within parts. (Image credits: NASA/JPL-Caltech)

What do you think about metal 3D printed parts being integrated into the Perseverance rover? Let us know in a comment below or on our Facebook and Twitter pages! Sign up for our free weekly Newsletter, all the latest news in 3D printing straight to your inbox!