All you need to know about PEKK for 3D printing 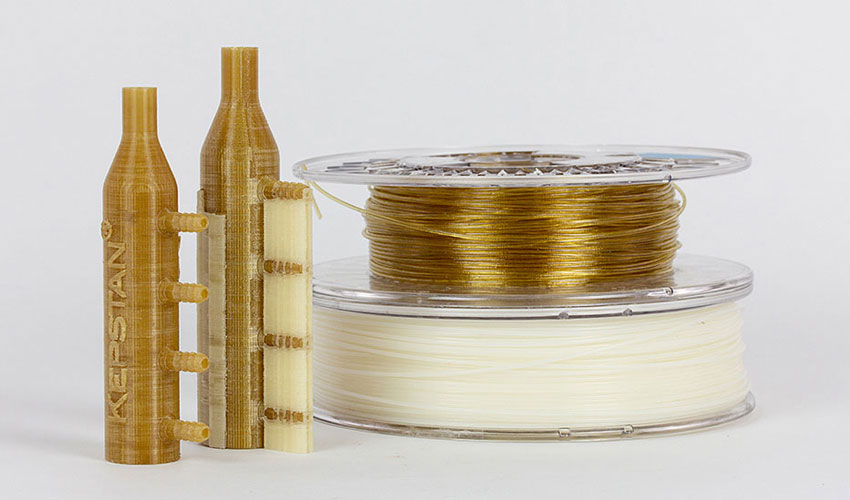 Polyetherketoneketone, better known by its acronym PEKK, is a semi-crystalline thermoplastic that is increasingly used in the additive manufacturing market. Often compared to PEEK, it belongs to the same family – the PAEK family – known for its mechanical and chemical properties. Easier to print than PEEK, in particular thanks to its lower crystallisation rate, PEKK is mainly found in the form of filament compatible with high temperature machines, but also in powder form for a very limited number of SLS 3D printers. However, it is still a very technical and expensive material, mostly used in demanding industries such as aerospace or Oil & Gas. So what are the characteristics of PEKK in 3D printing?

PEKK was first developed and marketed in 1988 by the company Dupont for the aerospace sector. Then, in the early 2000s, its composition was improved by Oxford Performance Materials, which was acquired by Arkema in 2009. Its composition is very close to that of PEEK, mainly made of ketone and ether. The main difference between these two high-performance materials lies in the ether/ketone ratio: PEKK has more ketone bonds, which are more flexible than ether bonds. In particular, this increases the rigidity of the polymer chains, thus raising the glass transition temperature (temperature at which the polymer starts to soften) and the melting temperature. Note also that this ratio is not the only difference. Indeed, the position of the ketone bonds in its aromatic ring can vary, which makes it possible to modify the melting temperature and the crystallisation rate.

The position of the ketone bonds can be modified | Credits: Arkema

In concrete terms, PEKK has a lower crystallisation rate and can therefore be treated as an amorphous polymer. It will be less affected by cooling, allowing it to have a better adhesion to the tray, avoiding the warping phenomenon. This makes it an easier material to print than PEEK. It also has a better visual appearance and better wear and friction properties.

Properties and applications of PEKK

PEKK has a very good resistance to abrasion and chemical aggression. In fact, it is capable of resisting many fluids such as benzene, the refrigerant used in the automotive sector, or even many alcohols. The material also has very good dielectric stability and insulating properties, key advantages in the electronics field. Finally, PEKK is non-flammable and does not give off toxic fumes. In terms of printing characteristics, PEKK has an extrusion temperature generally between 340 and 360°C and will require a heating plate and a heated chamber as well. The prerequisites are essentially the same as PEEK, except that the extruder temperature is slightly lower.

As far as applications are concerned, PEKK is very popular in the aerospace and automotive sectors, but also in the Oil & Gas industry because of its resistance to pressure and high temperatures. The material has a high weight/strength ratio which makes it an ideal solution for the manufacture of strategic parts in aeronautics where reducing weight is key to optimize performance. In addition, carbon fiber reinforced PEKK is available, which increases its rigidity and lightness. 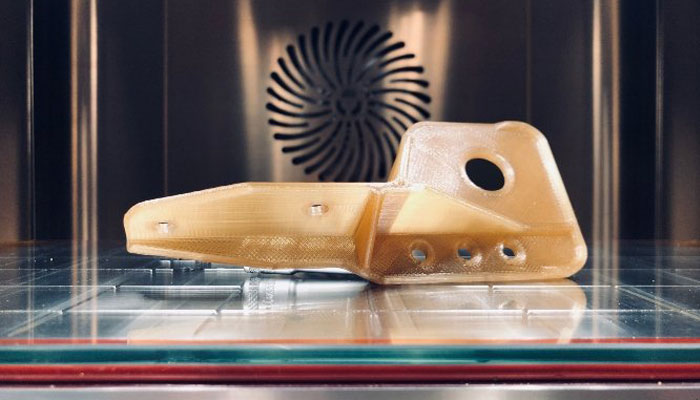 Today, the chemical company Arkema is the largest producer of PEKK for additive manufacturing, whether for filament extrusion or powder sintering – you may be familiar with its PEKK Kepstan® brand. Lehvoss Group is also working on the development of granules for filament design, they have actually just released their LUVOCOM 3F PEKK, which is available as granules. Some manufacturers of 3D printing materials offer this high-temperature filament: the French company KIMYA with its PEKK-A, but also Nanovia, 3DXTech and 3D4Makers. If we look at the prices, a 500 gram spool can easily go up to 400€, or even 500€ if it is reinforced with carbon fibers. On the powder side, EOS is currently the only manufacturer of SLS machines compatible with PEKK – its compatible machine is the EOS P 810.

Have you ever used PEKK? Let us know in a comment below or on our Facebook and Twitter pages! Don’t forget to sign up for our free weekly Newsletter, with all the latest news in 3D printing delivered straight to your inbox!