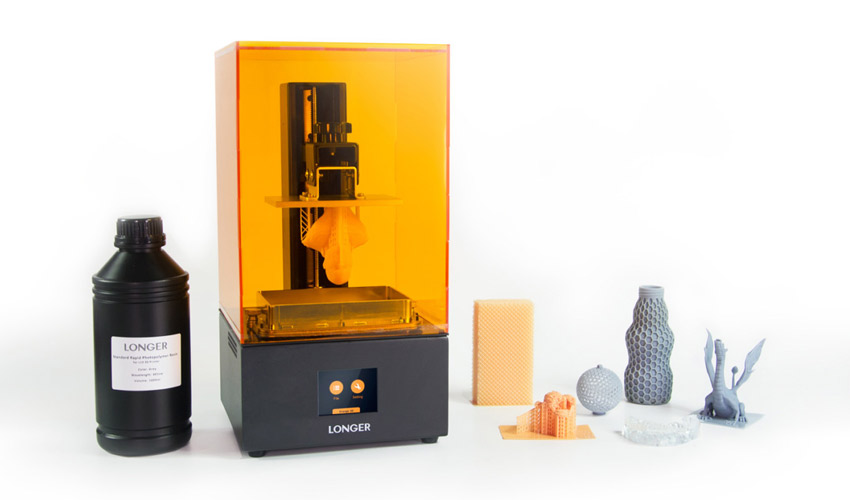 Originally from Shenzhen, China, Longer 3D launched its 3D printing business back in 2014. The company manufactures three distinct types of machines: desktop FDM 3D printers (known to manufacturers under the Alfawise brand), low-cost resin 3D printers and a range of industrial machines (two models based on stereolithography and one model based on DMLS).

At the beginning of 2019, the Chinese manufacturer was counting on a Kickstarter campaign to support the development of one of its latest 3D printers, the Orange 30. The machine was successfully funded by $150,000 in crowdfunding. The Orange 30 from Longer 3D is a low-cost resin 3D printer, it uses a 2K resolution LCD screen to solidify a liquid resin. Other low-cost SLA models from Longer 3D include the Orange 10 and Orange 120, the main difference being their build volume and connectivity.

We were pleased to receive the Orange 30 in our 3Dnatives Lab to start testing. Its price, below $399.99 on Amazon, makes it one of the cheapest resin 3D printers on the market. Is this at the expense of performance or user experience? How does the Orange 30 compare to other desktop 3D printers from Formlabs, Uniz3D or eSun? Who is this machine for? Find the complete review of the Orange 30 from Longer 3D below! 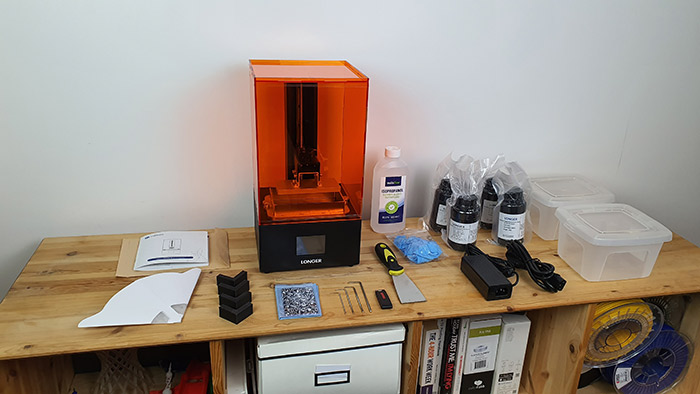 The Orange 30 3D printer, with its UV cover that we had to assemble and its accessories | Credits: 3Dnatives

Unpacking the Orange 30 from Longer 3D

When we received the Orange 30, we discovered a relatively small cardboard box. In fact, the Orange 30 has a weight of only 6 kg for overall dimensions of 200 x 200 x 390 mm, officially making this machine the smallest to be tested in the 3Dnatives Lab. As a result, the build volume on this machine can create parts with a maximum size of 120 x 68 x 170 mm (note that this is larger than the build volume offered by the iSun LI20 3D printer and larger than its little sister, the Orange 10).

From an aesthetic point of view, the Orange 30 is quite simple but has the advantage of offering a 2.8-inch full-color front-panel touchscreen, small but functional enough to navigate through its options. We noticed that the the printing platform displayed a shape specially designed to enable resin to flow, an important feature once the print is finished. 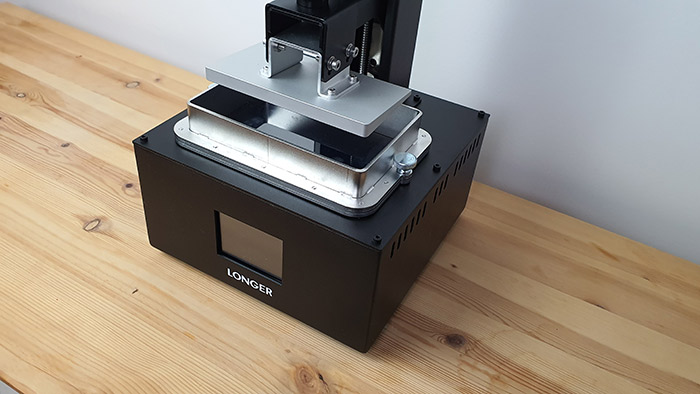 Inside the package, the 3D printer was already equipped with its resin tray, the printing platform and the power supply, we also discovered 5 UV protection panels to be assembled with 3 elastics, as well as 4 assembly guides. Several tools and accessories were also present, including 4 hex keys, a spatula, 2 filters from 3M to rinse the resin container with, 5 hand scrapers, 1 wipe, a spare film for the resin container, two pairs of latex gloves, a USB key, an English user manual and finally a 250g beige resin bottle. The manufacturer also provided us with 3 additional resin bottles, one of which was grey. As with many resin machines, you will also need to invest in a homemade post-processing kit (i.e. you will need to rinse the finished print is an isopropyl alcohol solution, to remove excess resin – not provided in the package).

Concerning the available resins, Longer 3D currently markets 5 types of resins: beige, grey, black or white but also a calcinable resin. On top of this, thanks to its open architecture, you can use other resins on the market. One thing to keep in mind is that you will need to adjust the exposure time (and be careful to use a resin compatible in terms of wavelength). 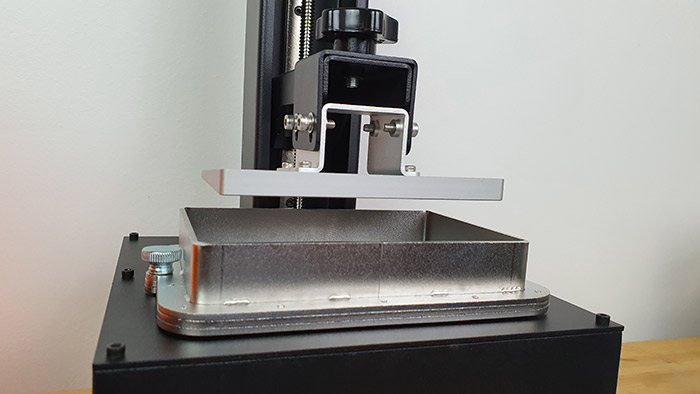 The resin tray and printing platform of the Orange 30 | Credits: 3Dnatives

The main advantage of using a LCD resin 3D printer is its fast printing speed. Compared to SLA machines where a laser solidifies the resin point after point, DLP technology uses a projector – in this case the projector is an LCD screen – to “flash” and solidify the photosensitive resin layer by layer. At Longer 3D, the LCD projector has a resolution of 2K, equivalent to the screens found on the Uniz Slash+ or the iSun3D LI20. As a result, the 3D printer can achieve a pixel resolution of 47.25 μm.

From installing the 3D printer cover, to cleaning the parts or using the software, Longer 3D has created a series of 16 explanatory videos available on its website (in the Support > Download section) to help you put together the machine. Although only available in English, these videos remain a real positive point compared to the many low-cost machine manufacturers who have the unfortunate habit of marketing a product without any online support.

The first step with the 3D Orange 30 printer is to assemble the UV protection cover, which is simply held in place by two rubber bands. Although it only takes a few minutes, this operation shows where the manufacturer has decided to save money. And even if the hood seems relatively stable, you are advised to handle it with care. As explained above, a video tutorial of the cover assembly is available in English on the Longer 3D online support. 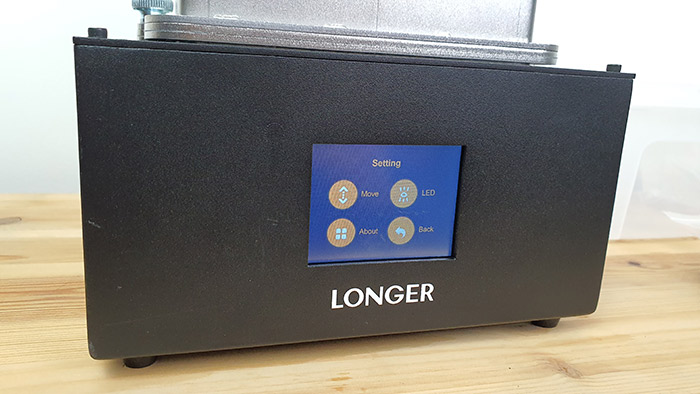 Secondly, you will have to calibrate the printing platform in relation to the Orange 30’s LCD screen, taking care to remove the resin tray beforehand. The objective here is to have a fully parallel platform located at a good distance from the screen. This operation will have to be repeated regularly.

Before you start 3D printing, you should pour the resin into the tank. As the latter does not display levels, be careful not to overfill it, as the resin could overflow outside the tank. Nothing automated here compared to more professional machines like Formlabs or 3D Systems, you will have to pour the resin manually.

As with most resin 3D printer manufacturers, the brand has developed its own software called Longer 3D – it’s PC and Mac compatible and available in English and Chinese only. It can be downloaded directly from the Support section of Longer 3D’s website. Note that it is also possible to use Chitubox, a universal slicer dedicated to SLA/DLP/LCD 3D printers (much like Cura can be used for 3D FDM/FFF printers).

The Longer 3D software, in version 1.32, is similar to the 3D printer Orange 30, in that it is simple. It allows you to perform all the basic operations expected of a slicer, such as positioning, rotating, cloning or enlarging the 3D model. Another positive point is that the software makes it possible to identify any design problems and even correct them. 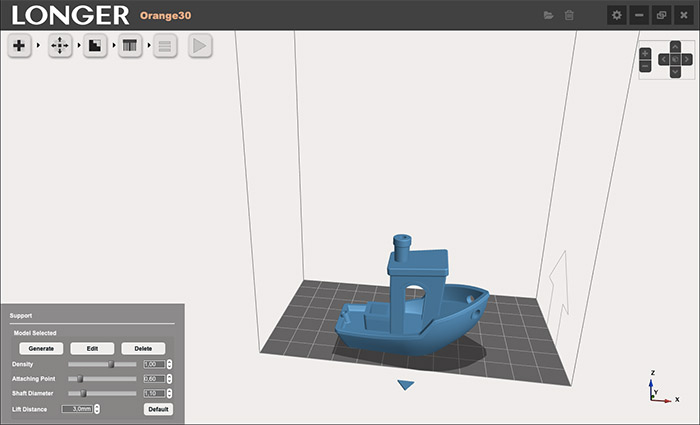 You will be able to generate supports for the part quite easily, you can also configure the density or thickness of the supports, the fineness of the contact points or the distance of the part from the surface of the plate. You will also need to select the layer thickness between 10 microns and up to 100 microns (5 microns steps) as well as the number of layers for the raft. The last step before exporting the file to the USB key will be to choose the resin used with the possibility of optimizing certain printing parameters (such as the exposure time of the raft layers or the following layers, the distance or the elevation speed of the tray between each layer, etc.)

4. First impressions with the Orange 30 from Longer 3D

Once the installation of the machine and the preparation of the files were completed, we started 3D printing the first models. After connecting the USB key to the back of the machine, including the pre-loaded models, followed by a few clicks on the control screen, 3D printing can start. Knowing that the Orange 30 is based on LCD technology, we decided to print rather detailed 3D models, we used the beige resin provided by Longer 3D.

The 3D printing as such did not show any major complications. The only error on the board occurred on our third impression when the Orange 30 started making disturbing noises. The problem occurred because the printing plate came to rest against the resin tray. After recalibrating the machine and cleaning the tank, the problem was solved. Overall, the surface quality of the parts was high, especially on the most complex models. We also noted the relatively low noise level of the 3D printer, which makes it a machine particularly suitable for an office environment. The other difficulty observed on some prints concerned the detaching the part from the tray after printing, a problem that can also be found in the FDM process. We advise you to take your time on this step to avoid damaging the part.

Compared to FDM technology, post-processing of the part is mandatory. In practical terms, you will have to clean the part using two rinsing tanks and an isopropyl alcohol solution. After several minutes, you can then tackle the printing supports. For some parts, this operation can be critical enough to damage the fine details of the model, so you should be careful. Finally, we advise you to clean the printing platform thoroughly and do not forget to remove any solidified resin pieces that may have been lost in the resin tray before starting a new print.

We also changed the film of the resin tray using the replacement film and a simple hex key and cutter. Although not especially necessary in our case, it is important to keep this film clean of any scratches or resin that may have clung to its surface. The procedure, again explained in a video from the manufacturer, is simple and takes about 5 minutes! Below you can check the models we 3D printed on the Orange 30: 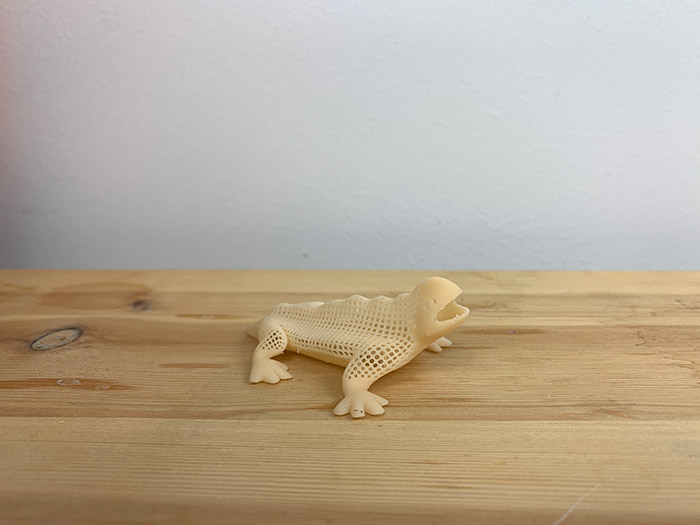 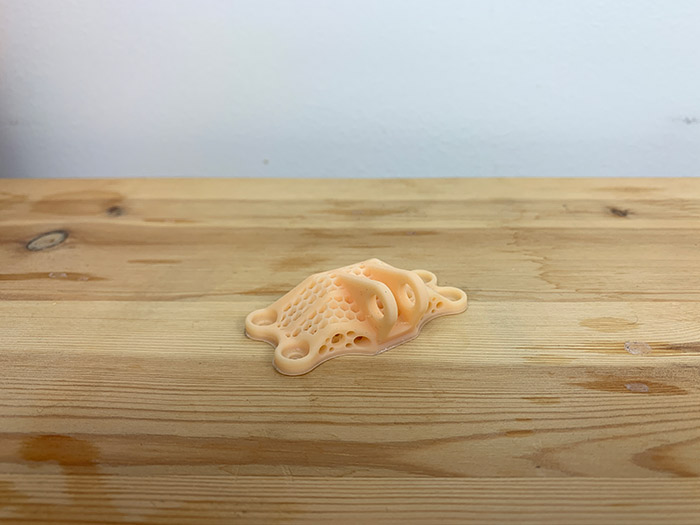 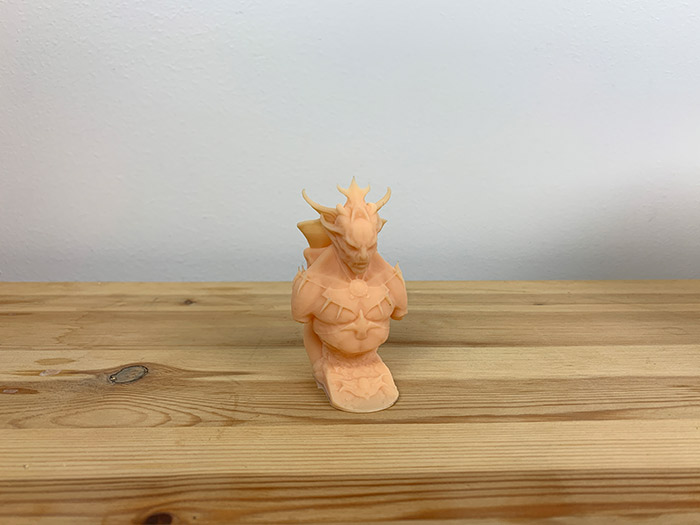 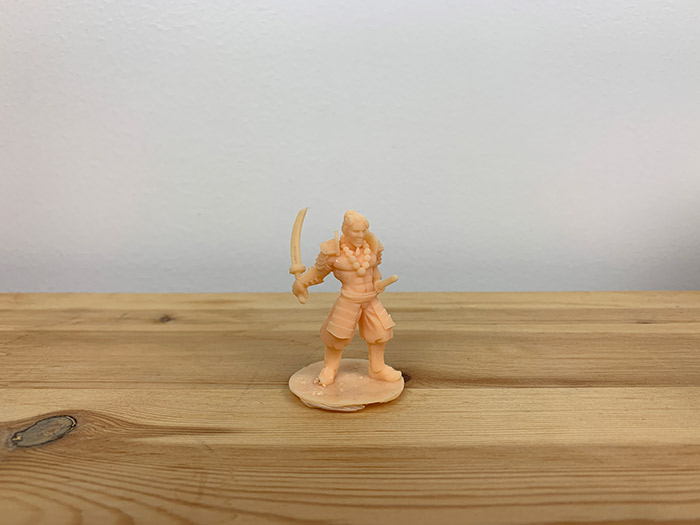 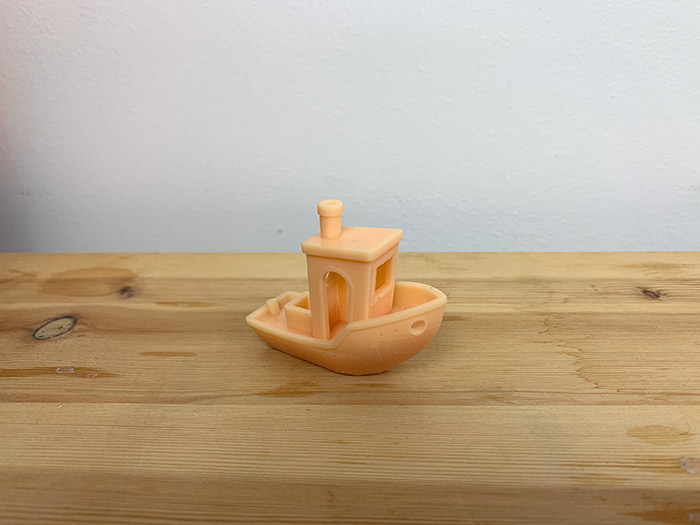 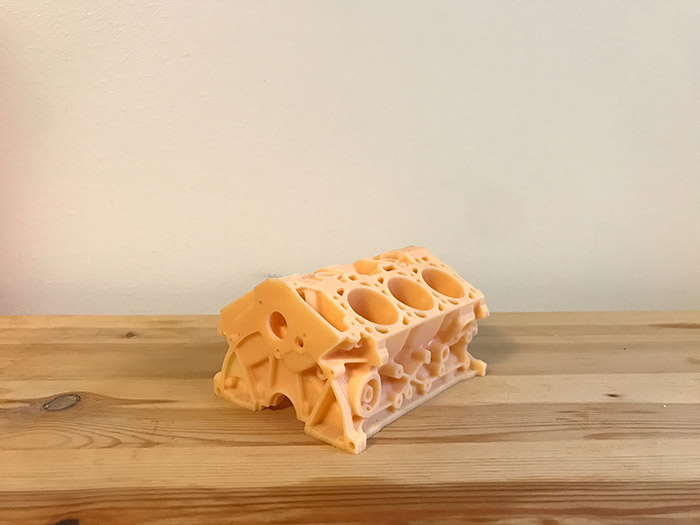 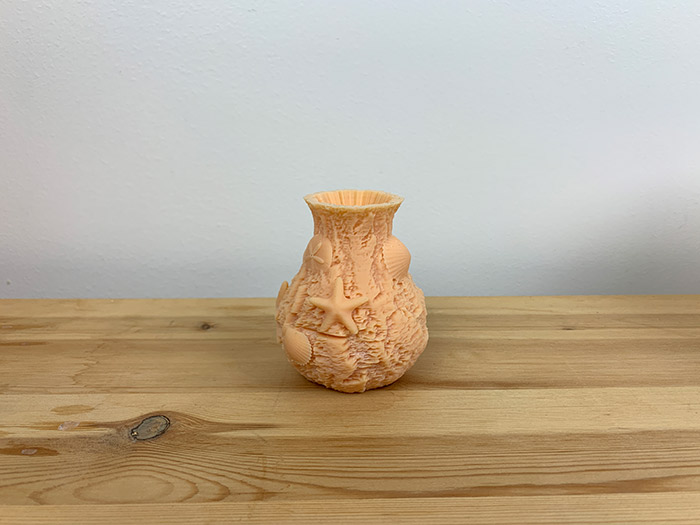 As you can see, the Orange 30 3D printer offers an interesting price-quality ratio. So yes, for such a price you will have to give up on the plug&play feature that some more professional machines can offer on the market. That said,  it will be very difficult to find a more affordable resin printer on the market that can offer this quality. In addition, it is possible to use a wide range of third-party resins available on the market, further reducing costs for long-term use.

We liked its simplicity and discretion when printing in the office, not to mention the Longer 3D software which is the pleasant surprise of this test! On the other hand, you may not be too fond of the self-assembly UV cover. The volume of production will also limit the number of prints that we would have liked to make, which is for you to decide if it will limit or not your projects. It will be interesting to take a closer look at the new products from the manufacturer Longer 3D in the coming weeks. You can find the 3D printer Orange 30 from Longer3D at Amazon US HERE.