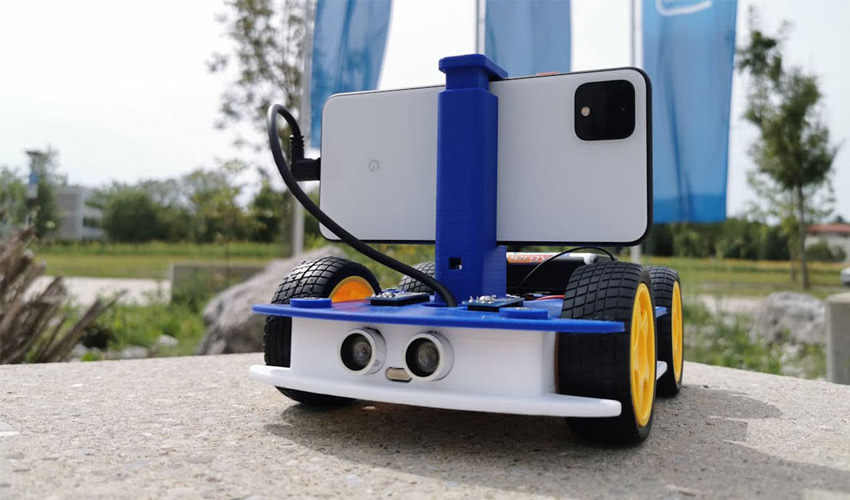 Based in Silicon Valley, California, Intel is an American multinational corporation and one of the leading companies on the  global tech arena. Its research division, Intel Labs, recently put online the 3D files of its new 3D printable robot: available open-source, this device functions with a smartphone and is available for less than $50! Called OpenBot, it can move autonomously and perform many recognition tasks. Is this project a step towards more accessible robotics?

Nowadays, it is not uncommon to use additive manufacturing in the robotics sector. For example, there are robots that are capable of working in swarms to accelerate the manufacturing process, as is the case with our startup of the year 2019, AMBOTS. Oftentimes, the goal of incorporating the 3D printing technology is to lower the cost of the robot components, which is otherwise rather high; we have seen it in the projects like Flexoskeleton from UC San Diego and Solo 8 robot dog. It is with this goal in mind that Intel has launched Openbot: the American tech giant wants to lower the price of the robot but above all make it open-source so that everyone can make improvements. Researchers explain: “Current robots are either expensive or make significant compromises on sensory richness, computational power, and communication capabilities. We propose to leverage smartphones to equip robots with extensive sensor suites and access to a thriving software ecosystem, in a small electric vehicle that costs $50.”.

Openbot was tested with a range of different smartphones.

Intel Labs recommends the use of PLA material for 3D printing of different parts of the robot – it is one of the simplest thermoplastics to extrude, requiring no special technical machine. Researchers used an Ultimaker S5 to build the Openbot chassis. It is actually a plate attached to a cover with six screws. The latter integrates a universal smartphone holder with an adjustable spring to make it compatible with different phones, and an opening to attach an Arduino microcontroller powered by USB. The team says that the complete printing process takes about 13.5 hours for the bottom plate and 9.5 hours for the cover with the phone holder. Of course, it is possible to print faster, but at the expense of final precision and quality. Finally, on the weight side, count 146 grams for the plate and 103 grams for the lid. The assembly is quite easy, according to the creators of the OpenBot, it takes around 30 to 60 minutes .

Intel Labs has assumed that at least 40% of the population has a smartphone today, so why not use the features of these smartphones to go further in their project? So they developed an Android application so that the user can have an interface to collect data and control the robot’s workload. This application comes with an Arduino nano-microcontroller that takes care of the low-level functions.

The chassis of the OpenBot are 3D printed.

After testing several brands of smartphones such as Samsung, Huawei, Xiaomi and Nokia, the team confirmed that the robot is able to move autonomously and perform recognition tasks such as following a person. Intel has not yet planned to develop another application for iOS. Are you ready to create your robot? You can find all the parts HERE. Don’t hesitate to watch the video below to learn more about the project.

What do you think about this 3D printed Openbot by Intel Labs? Are you interested in printing one for yourself? Let us know in a comment below or on our Facebook and Twitter pages! Sign up for our free weekly Newsletter, all the latest news in 3D printing straight to your inbox!