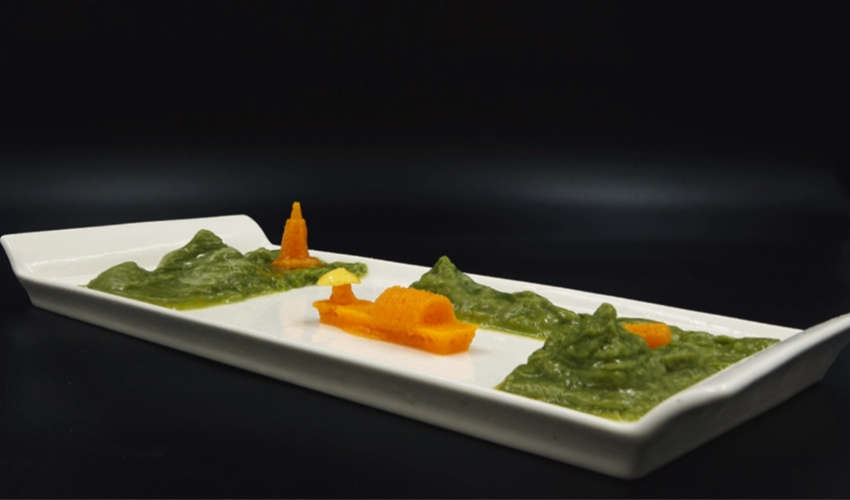 Singaporean researchers have developed a novel method of 3D printing vegetables using food hydrocolloids. Previous three-dimensional food printing (3DFP) methods have largely relied on freeze-dried vegetable powders. This method, however, is centred around the use of fresh and frozen vegetables to create “food inks” for 3D printers. The advantage of using fresh and frozen, rather than dried vegetables, is that it better preserves their nutrition and flavour. Additionally, this novel method of 3D printing food is cheaper than the majority of existing methods.

This discovery was the result of a collaboration between Nanyang Technological University, Singapore (NTU Singapore), Singapore University of Technology and Design (SUTD) and Khoo Teck Puat Hospital (KTPH). The research was targeted toward helping people with dysphagia. Dysphagia describes difficulty swallowing. This is a commonly experienced issue for elderly people and people suffering from debilitating illnesses. People suffering from dysphagia are confined to foods that are soft and safe to swallow. Therefore, they either require a restrictive diet, or food that has undergone textural modifications. In order to prevent malnutrition foods should also be visually pleasing to encourage a greater uptake. 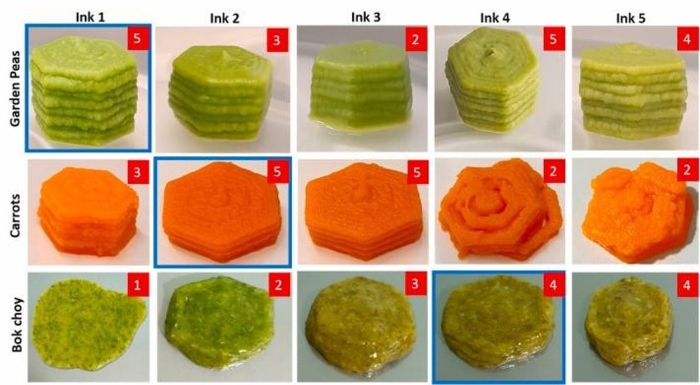 Researchers experimented with different levels of hydrocolloids to optimise the taste, texture and printability of the vegetable food inks.*

A hydrocolloid is a particle, or colloid, which has been mixed in water, or hydrated. Hydrocolloids are responsible for providing several common foods with the right viscosity, texture or structure. Traditionally, the powders used in food inks contain high levels of food additives, particularly hydrocolloids. While these are useful for stabilising the ink and making the printing process easier, a high concentration of hydrocolloids changes several aspects of the food, including the smell, taste and texture. This often causes the food to become considerably less appetising, which in turn can act as a deterrent and result in those suffering from dysphagia to reduce their food consumption, and in some cases even become malnourished. The research team thus wanted to find a way to limit the detrimental effects of hydrocolloids. They experimented with different levels of hydrocolloids in order to find the minimum amount that would still render the inks printable.

Thanks to this novel method of 3D printing vegetables, the research team were able to print more appetising, and more nutritional vegetables by limiting the amount of hydrocolloids in the food ink as well as by using fresh and frozen, instead of powdered vegetables. Yi Zhang, the chief investigator of the NTU team commented; “Our technology helps to provide dysphagic patients with adequate nutrient-rich and safe diets. Their feeding is more dignified, enabling them to socialize and consume meals that look, feel and taste like regular food”.

If you would like to read the full findings of this research, you can find the full paper HERE. What do you think about this novel method of 3D printing vegetables? Let us know in a comment below or on our Facebook, Twitter and LinkedIn pages! Sign up for our free weekly Newsletter here, the latest 3D printing news straight to your inbox!

The Formula One Williams Racing Team Joins Forces with Nexa3D