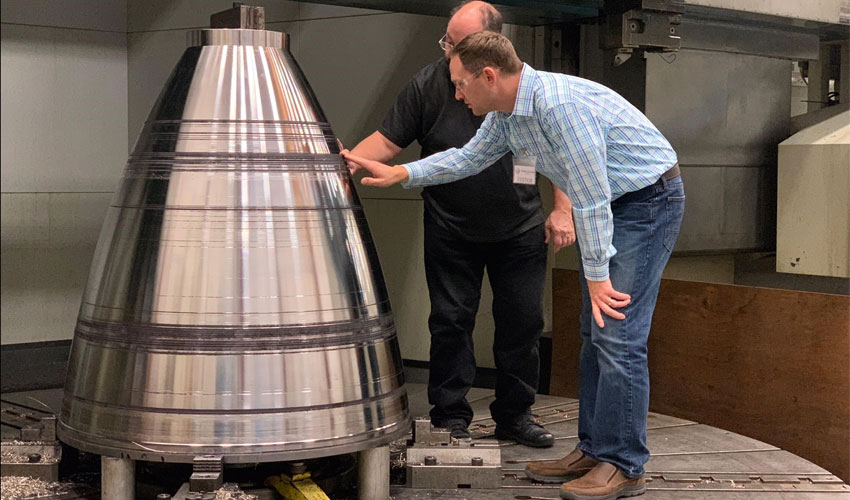 NASA is preparing to send men to the Moon – and then further to Mars – as part of its Artemis space exploration mission. For this space voyage, the American agency has decided to rely on metal additive manufacturing, more precisely, on Blown Powder Directed Energy Deposition, a 3D printing technique similar to DED technology. Thanks to this technology, NASA is designing the rockets of tomorrow: the RAMPT (Rapid Analysis and Manufacturing Propulsion Technology) project aims to additively manufacture large engines of space rockets. In order to test the metal 3D printing technology and confirm its advantages, the teams have designed a nozzle with a diameter of one meter and a height of 0.9 meters with integrated cooling channels.

NASA has been exploring the potentials of additive manufacturing for several years, mostly focusing on metal 3D printing that would allow the agency to design components for its satellites and rockets faster while maintaining their strength and complexity. In April 2019, NASA launched the RAMPT Project to develop new design and manufacturing methods that would  improve combustion chamber and nozzle performance, all while reducing costs. Thus, RAMPT mainly focuses on the two heaviest components of the engine system that are also the most expensive to produce today. Ultimately, the goal is to fully integrate new manufacturing processes – including 3D printing – on a national scale, characterize the materials and, of course, test the results. It is in this context that NASA has created a 3D printed nozzle made of metal. 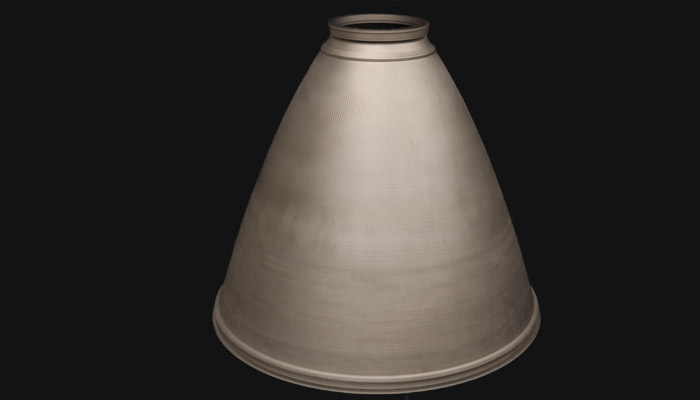 The RAMPT project is based on the Blown Powder Directed Energy Deposition technology, which consists of injecting metal powder into a laser-heated molten metal basin. A print head, attached to a robotic arm, moves according to the pre-determined pattern and manufactures the part layer by layer thanks to an optical laser that hardens the blown powder. It is  practically the same technique as DED, which is known for its ability to repair metal parts and manufacture large parts, such as rocket engine nozzles. Paul Gradl, co-principal investigator at RAMPT, explains: “It’s a challenging process to manufacture the nozzles traditionally, and it can take a very long time. Blown Powder Directed Energy Deposition additive manufacturing allows us to create very large-scale components with complex internal features that were not previously possible. We’re able to significantly reduce the time and the cost associated with the fabrication of channel-cooled nozzles and other critical rocket components“.

The team presented the first large nozzle – 1 meter in diameter by 0.9 meter high – it took only 30 days to manufacture it. Such a part typically requires a year’s work using traditional welding methods. What’s interesting is that it incorporates cooling channels that allow a cryogenic propellant gas to pass through to maintain an optimal temperature. Additive manufacturing allows for this type of complexity through optimized design methods.

Drew Hope, Director of NASA’s Game Changing Development Program, which is funding the RAMPT project, commented: “This technology advancement is significant, as it allows us to produce the most difficult and expensive rocket engine parts for a lower price tag than in the past. Further, it will allow companies within and outside of the aerospace industry to do the same and apply this manufacturing technology to the medical, transportation, and infrastructure industries.” The 3D printed nozzle will be subjected to a series of tests, including a combustion temperature of 6,000 degrees and the same pressures as those observed during a rocket launch. We are eagerly awaiting the results! In the meantime, you can find more information HERE.

What do you think about NASA actively integrating additive manufacturing technologies into its production processes? Let us know in a comment down below or on our Facebook and Twitter pages! Don’t forget to sign up for our free weekly Newsletter, with all the latest news in 3D printing delivered straight to your inbox!