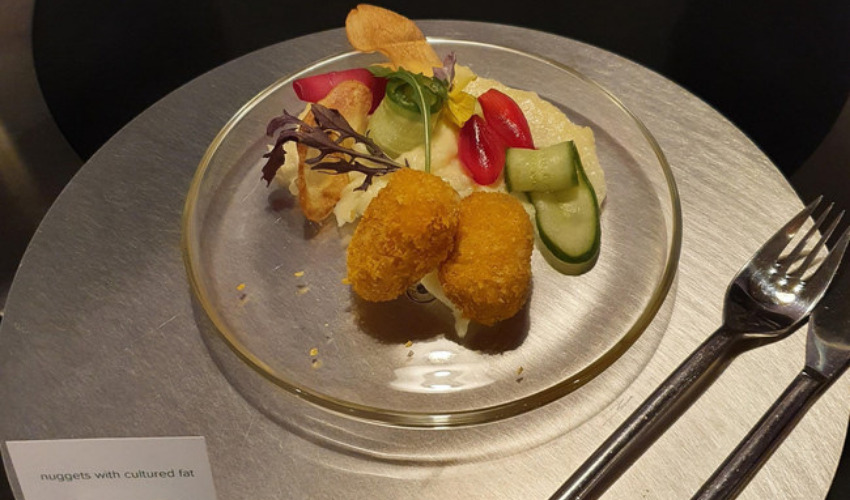 MeaTech has filed a provisional patent application in the United States Patent Office for their bioprinting method to make chicken and steak products using cells. The company has dedicated itself to clean farming through the development of an industrial process for growing cultured meat using 3D printing technology. According to MeaTech, this novel bioprinting method could allow for higher control of bioink printing during the multi-layered process. As a result, the company believes that it will be able to achieve premium, thick meat emulating products while allowing for increased printing speeds and the use of varied inks with greater viscosity.

This is certainly not the first time that we have seen bioprinting used to create meat. Though often associated with the medical sector (bioprinting organs, etc), bioinks have grown in popularity in recent years for meat products. This is because increasingly people are looking for more sustainable and cruelty-free ways to consume meat. This is a valid concern as according to the WWF, “25% of global land use, land-use change and forestry emission are driven by beef production, including conversion of forests in the Brazilian Amazon.” 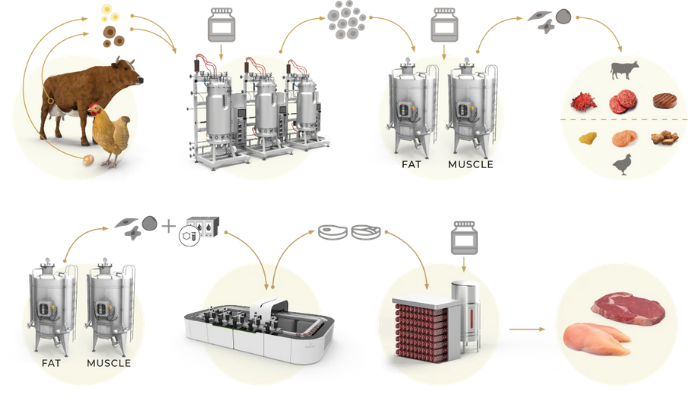 MeaTech’s process for bioprinting. The top shows the cell-based process vision wherein cell collection is followed by cell growth then differentiating between fat and muscle to get ground products. On the bottom is the process for cultured steak with bioinks being used for bioprinting, before the printed product is incubated to mature and form tissue. The result is structure meat in a fraction of the time. (Photo Credits: MeaTech)

This is certainly one of the main drivers for MeaTech. On their website they note that they are looking to address the fact that the meat industry is highly pollutive. They note that currently 8% of the world’s water is used for raising livestock for meat and leather, at least 18% of the greenhouse gases entering the atmosphere are from the livestock industry and 33% of croplands are used for animal feed production. By creating meat from cells, not only would people be able to continue eating meat (as it has become such a central part of so many cultures’ meals) though in a more sustainable manner.

For this reason (among others), MeaTech is trying to develop advanced manufacturing technologies to produce alternative protein products: namely cell-based beef and chicken as well as enhancing plant-based foods with real meat. Ultimately, the company is not just aiming to make the meat industry more sustainable, but to produce thicker, premium cuts of cell-based cuts of meat. This patent is for their technologies as they aim to protect their technology, inventions and improvements on previous bioprinting technologies.

The technology in question is a novel method for bioprinting that MeaTech believes will provide an exceptional control of bioink printing. The method is similar to material jetting, though using cells, and the company notes that it allows for significant control during in situ inkjet printing of each droplet size, the volume of droplets, and the precise placement of droplets onto a substrate layer. The advantage of this is that it could allow for a certain amount of flexibility in the bioprinting, including by increasing printing speeds and allowing the use of inks with a varied viscosity, traditionally considered difficult to bioprint. It will be used to produce premium cuts of cell-based cuts of meat, allowing for meat that is cruelty-free and sustainable.

Sharon Fima, the CEO of MeaTech concluded: “This novel technique for achieving more controlled, higher resolution printing may prove to be a promising path forward towards achieving high-throughput, large-scale cultivated meat production. As a 20-year veteran of the printing industry, I recognize the significant potential this patent application holds, as it directly addresses key challenges currently facing the bioprinting industry.” You can find out more on the company’s website HERE.

What do you think of the patent application for this bioprinting method by MeaTech? Let us know in a comment below or on our Facebook, Twitter and LinkedIn pages! Sign up for our free weekly Newsletter here, the latest 3D printing news straight to your inbox!