3D printing news News What Do We Know About the First 3D-Printed House Inaugurated in Germany?

What Do We Know About the First 3D-Printed House Inaugurated in Germany?

Recently, the first 3D-printed house in Germany was officially inaugurated and has been the talk of the town ever since. This is because the 160-square-meter building is not only an architectural sensation, but has already been awarded the “German Innovation Award” 2021. The single-family house was created using concrete 3D printing and is intended to prove that the technology has reached market maturity. So we decided to take a closer look at the creation of the house from the 3D printing technologies and printer used to its unique design.

Already the exterior facade clearly stands out from the other buildings in the city: the individual concrete layers of the additively manufactured single-family house are clearly recognizable, the shape of the home round instead of angular. The building was planned by the regional architectural office Mense-Korte, and the PERI Group finally turned the plan into reality under Hous3Druck. After around 8 months, all those involved are pleased with the completion of the pilot project and agreed that it heralds a new era. After all, concrete 3D printing is set to become a permanent feature of the construction industry and the 3D-printed house in Beckum, Germany is a great example of the feasibility of such projects, along with some of the others we have seen this year including SQ4D listing the first 3D-printed home in the United States or the first 3D-printed home on Airbnb. 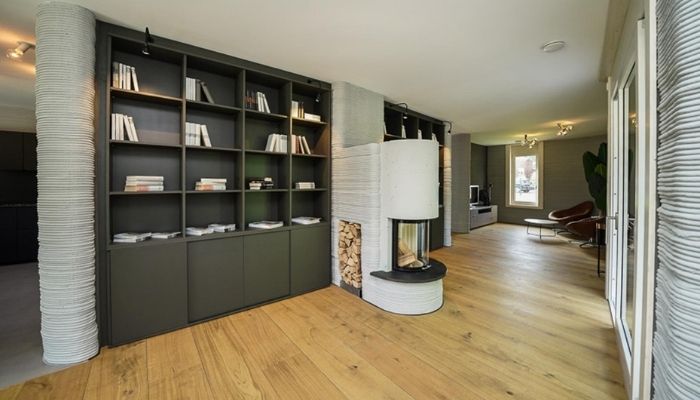 The chimney inside the residential building was also created layer by layer (photo credits: Robert Szkudlarek)

If you take a look at the interior of the house, you will notice that here, too, the gray concrete layers and round shapes dominate. In the rooms there are also other highlights made of concrete, such as the fireplace or the bathtub. Lisa-Maria Hanhues, the future owner of the house, is planning to move in in 2023. Until then, the building in Beckum will serve as a show house. Hanhues is the sister of the managing partner of Hous3Druck and noted at the inauguration of her new home, “I’m pleasantly surprised that you can find so much space for furniture despite the curves.” In addition to the unusual flair, the house offers other pluses: it is as a smarthome, wherein the temperature is regulated by means of a geothermal heat pump, and all functions can be carried out at the touch of a button.

A BOD2 from the Danish manufacturer COBOD was used for the printing process of the two floors, each of which has a living area of over 80 square meters.  According to PERI, this is a gantry printer that carries out a movement of the print head over 3 axes on a permanently installed metal frame. The material used was “i.tech 3D”, which was specially developed by HeidelbergCement for 3D printing and is compatible with the BOD2. According to PERI, the BOD2 creates 1m of concrete per second, making it the fastest 3D concrete printer on the market. For example, printing a double-skin wall takes 5 minutes per square meter. 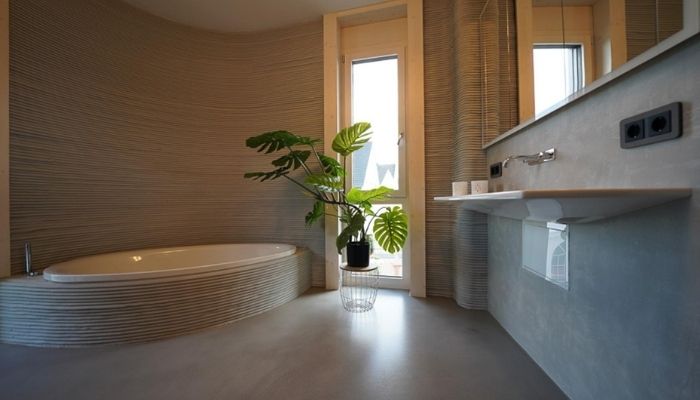 Gray in gray in the modern bathroom of the house (photo credits: Robert Szkudlarek)

The fact that additive manufacturing is increasingly gaining acceptance as a pioneering technology in the construction industry is also reflected in the fact that the project in North Rhine-Westphalia was supported with 200,000 euros from the state’s Innovative Construction funding program. At the opening ceremony of the 3D printing house, the responsible minister Ina Scharrenbach (CDU) is certain that this project will be followed by other innovative projects, stating, “With the first 3-D printed residential building in Germany, positive pressure is being generated in the construction industry: for innovative construction with new technologies, for greater attractiveness in construction professions and for modern architecture with new styles. Now we need to gain experience with the building and establish the manufacturing process on the market, because only more housing provides affordable rents.” Among other things, the state intends to use the funds to further advance innovative technologies for the creation of living space. You can find out more in the video below or in the press release HERE.

What do you think of the inauguration of the first 3D-printed house in Germany? Are there any 3D-printed houses in your country? Let us know in a comment below or on our Facebook and Twitter pages. Don’t forget to sign up for our free weekly newsletter, with all the latest news in 3D printing delivered straight to your inbox!