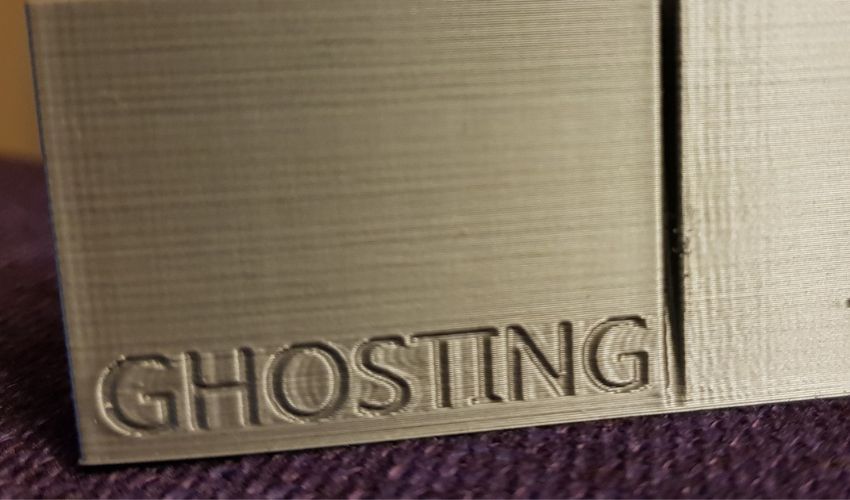 3D printing, like any manufacturing method, does not come without problems. Besides stringing in 3D printing, where unwanted thin filament threads are stretched between non-printed areas, thus creating ‘strings’ of material, there is also ghosting. You may have heard of this 3D printing phenomenon under a different name, such as ringing, echoing, or even rippling – but they all refer to the same problem. In fact, the term ghosting is very apt, as lines or even entire designs repeat on the part in a weakened manner. This means that if you print a round logo, for example, other unwanted imprints of the logo will be found on your 3D-printed part after the actual printing. Visually, it is analogous to when a stone is thrown into water, making ripples that appear fainter and fainter the further the distance from the impact.

However, these duplicates of previous functions on the printed surface only really become visible when they are hit by light at a certain angle. This often happens during FDM printing as it is common with filaments. Ghosting does not always necessarily affect the entire part, but rather it is a wavy pattern or pattern created by printing vibrations, but which in turn can ruin an entire 3D-printed part. As mentioned before, ghosting effects are caused by the pressure vibration, which can have different triggers. We will now go over these factors and explain what settings you need to make to avoid them in future prints. 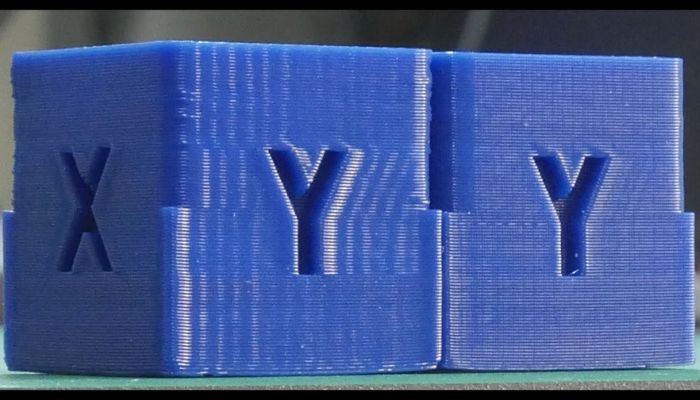 When Does Ghosting Occur and What Can Be Done About It?

When it comes to ghosting in 3D printing, one of the main causes that most people will think of is a print speed that is too fast – and rightly so! While users benefit from a higher print speed because it reduces the overall print time, it also increases the chances of an increased moment of inertia, which can impact drag and thus cause ghosting. If the print head advances at too high a speed, it will require more force to come to a stop so that it can subsequently change direction to continue printing. If you are working with common filaments such as PLA or ABS, then the average print speed is 50 to 60 mm/s, but if this is drastically exceeded, then the risk of ghosting increases. However, in addition to the print speed, you should also pay attention to the travel speed, i.e. when the nozzle is repositioning in between prints, as these can also influence the ghost-like 3D printing phenomena.

Acceleration and jerking can also have an impact on ghosting. We know that the print head never moves continuously, but takes pauses and picks up speed again, such as when it prints corners or curves. It is important that you adapt the settings so that the print head does not have to make awkward starts and stops, either when decelerating or when accelerating afterwards, because this can lead to unwanted vibrations of the entire hardware and eventually to ghosting during 3D printing. Some 3D printers additionally give you the option to activate jerk control, which is the change in speed that the print head picks up when accelerating. Therefore, make sure that these two values are minimized between when needed.

This tip about avoiding ghosting during 3D printing may come as little surprise to you, but it’s important to emphasize this again: making sure your 3D printer is really stable. While we’ve already pointed out that ghosting-causing vibrations originate from the print head, they can be further amplified by an unstable 3D printer. So make sure your 3D printer is on a flat and sturdy surface and not on a wobbly table, for example. You can also consider using an anti-vibration pad, as these pads specifically absorb vibrations and thus reduce ghosting.

The Importance of a Stable 3D Printer

While we’re talking about lack of stability in terms of ghosting in 3D printing, it’s also important to note that this can also happen due to loose belts. While both too-tight and too-loose belts can cause problems with printing, when it comes to ghosting, in this case it’s usually due to looseness, so it leads to vibrations. As an add-on, you can consider adding clamps to the frame of your 3D printer to maximize stiffness.

In order not to run the risk of ghosting, it is advisable to examine the weight of the print head, because this has a direct influence on the vibration, especially since a higher weight also generates higher forces when changing direction. Specifically, the heavier the extruder, the more weight of hardware will be on the mobile frame, increasing post-sliding vibration when the extruder stops. However, it is possible that in some cases the weight can be minimized and that is by mounting other hardware. However, keep in mind that this solution should only be considered in really drastic cases!

There are a number of possible factors that can lead to ghosting in 3D printing, but at the same time we see a whole range of possibilities to fix them immediately. It’s no secret that ghosting is a common problem when it comes to printing with FDM technology and it is certainly something to watch out for when 3D printing.

What did you think of this guide to ghosting in 3D printing? Let us know in a comment below or on our Linkedin, Facebook, and Twitter pages! Don’t forget to sign up for our free weekly Newsletter here, the latest 3D printing news straight to your inbox! You can also find all our videos on our YouTube channel.