In recent months, 3D printing and space have often been associated. And for good reason, many additive manufacturing has proven itself to have numerous applications for interstellar voyages. For example, 3D printing is increasingly being used as part of spacecraft and satellites and it is even being considered as the technology to be used to create habitats on other planets. But this time, we are talking about additive manufacturing and space for another reason. Notably, astrophysicist Nia Imara and her team have used 3D technologies to study the process of star creation also known as a molecular cloud or a star nursery. Thanks to these 3D printed stellar nurseries, scientists hope to be able to understand exactly how stars form and what conditions need to present when this happens.

In order to accomplish this impressive feat, Nia Imara and her collaborators used data from a stellar nursery simulation. They were able to model and then 3D print these models. John Forbes, an astrophysicist who assisted Nia Imara during this project, noted both the beauty of these printed nurseries as well as their use for scientific research. He stated, “Just aesthetically they are really amazing to look at, and then you begin to notice the complex structures that are incredibly difficult to see with the usual techniques for visualizing these simulations. Within the spheres, you can clearly see a two-dimensional sheet, and inside it are little filaments, and that’s mind boggling from the perspective of someone who is trying to understand what’s going on in these simulations.” 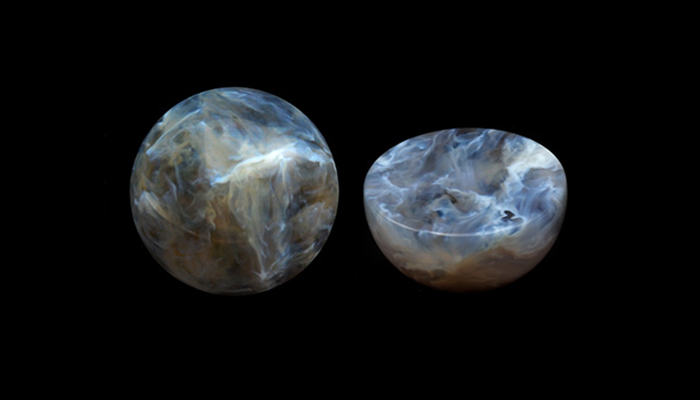 With these stellar nursery models, scientists have been able to observe previously unseen phenomena. For example, the 3D printed models reveal continuous structures that were impossible to determine with 2D projections. Nia Imara expanded, “If you have something winding around through space, you might not realize that two regions are connected by the same structure, so having an interactive object you can rotate in your hand allows us to detect these continuities more easily.” And while the researchers did not specify exactly what printing process was used to create these models, it appears that they used material jetting a technology known for designing extremely accurate multi-material, multi-color parts.

In the future, the astrophysicist explained that these 3D-printed models could be used to educate the general public about this type of phenomenon, but also to help instruct students. In particular, Nia Imara plans to use them in her upcoming university courses next fall. Additionally, it is possible to access the article “Touching the Stars: Using High-Resolution 3D Printing to Visualize Stellar Nurseries” HERE.

What do you think about these 3D-printed stellar nurseries? Let us know in a comment below or on our Facebook and Twitter pages. Don’t forget to sign up for our free weekly newsletter, with all the latest news in 3D printing delivered straight to your inbox!