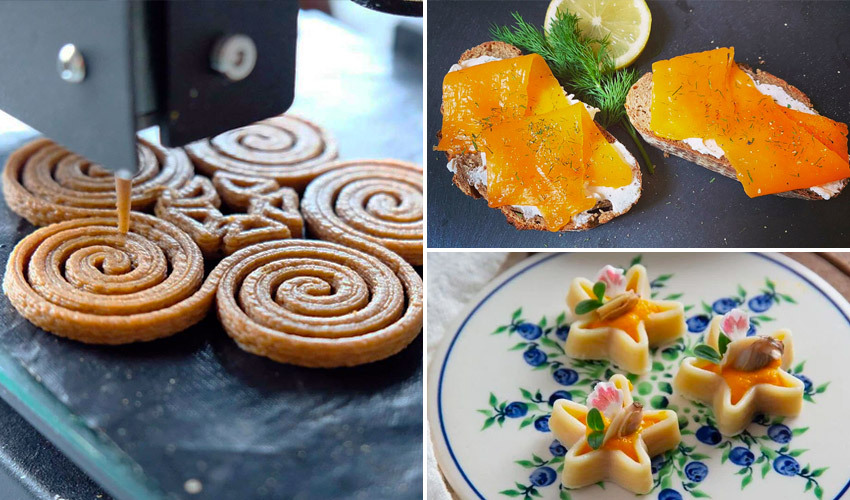 What might have once seemed a fantasy, is quickly becoming a reality. Food 3D printing has been growing rapidly in the past few years and already we are seeing 3D printed food being sold and even offered in universities and there are more and more 3D printers designed specifically for food 3D printing. From meat to desserts and everything in between, initiatives mixing 3D technologies and food are increasingly common as they allow for not just more complex and original shapes and innovative recipes, but also adapt to specific diets. For your convenience, we have gathered some of the applications we have seen in food 3D printing including food and gadgets. Check out the list which is in no particular order, if it is used in the realm of cooking, you will find it below!

We previously told you have Dovetailed Design Studio’s efforts to make a 3D printer that could make fruit using spherication. Well, since then, the technology has advanced. Dovetailed’s nufood 3D printer is what they consider to be the world’s first liquid-based 3D printer and it allows for the creation of small flavor bursts, including of course for fruit. Indeed, one of the first applications was with the combination of fruit juice and sodium alginate powder for the creation of different fruits. Now, fruit flavored droplets are still being made by the company for luxury food and cocktails. The company hopes the printer will add playfulness and joy to cooking. 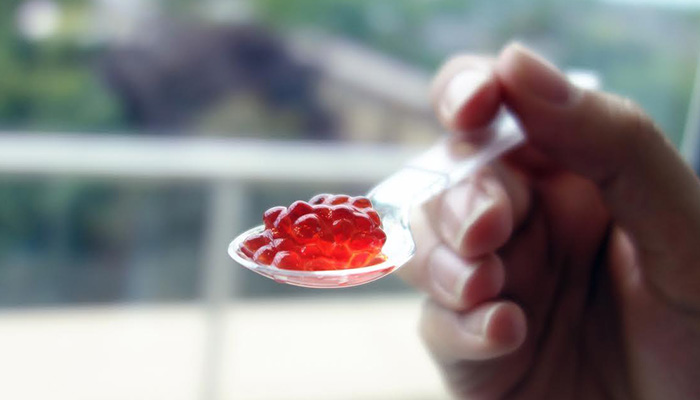 The renowned Italian company Barilla, which specializes in pasta, developed the first 3D printer for fresh pasta in collaboration with the Dutch company TNO in 2016. With it, they have managed not only to offer good quality to the dishes around pasta, but it can also be used to create unique shapes. Now the company has announced that on its website it is already selling at least 15 different 3D printed pasta models. Some famous chefs are said to be already using some of these pastas in their kitchens. 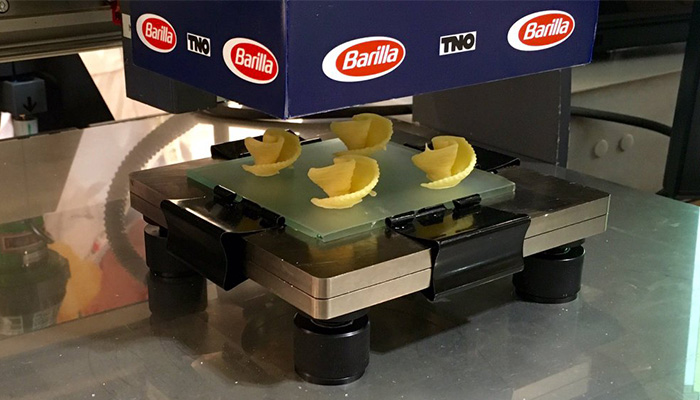 Additive manufacturing has now made it possible not only to produce meat substitutes such as those from Nova Meat or Redefine Meat, but even “real” meat products can be 3D printed. This is achieved by means of a process in which viable animal cells are used in the 3D printing process. In the future, this could put an end to factory farming with the help of additive manufacturing, which makes it possible to produce muscle as well as fat cells with pinpoint precision and industrial production speed. Hybrid products that combine the advantages of animal and vegetable protein are also well received by consumers, as the cooperation between the two companies Meatech and Enough shows.

In the food 3D printing sector, the Austrian start-up Revo Foods has recently been making the news. Using various plants, the startup aims to 3D print several seafood products, such as salmon slices. While Revo Foods currently offers products in the form of spreads that have not been 3D printed, in the near future the company hopes to take advantage of 3D technologies to develop an automated production line and 3D print more salmon, in all its forms! 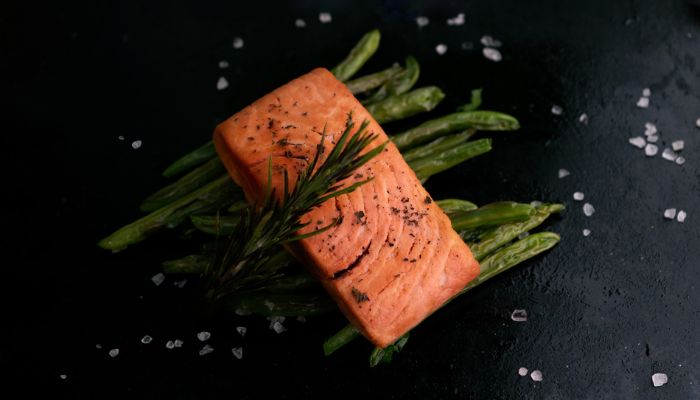 3D Printed Food Based on Seaweed

In Chile, nutrition experts have developed foods designed from algae through additive manufacturing. Filled with important nutrients and attractive shapes, these foods were developed from Cochayuyo algae, a plant found in Chile that is an important source of plant protein. Because of the advantages of 3D printing, the teams in charge of this project have developed edible figurines designed to attract children. In this way, they hope to make children want to eat plant proteins. Regarding the printing process, if the technology used is not specified, the experts confide however to be able to 3D print an edible figurine in only 7 minutes. 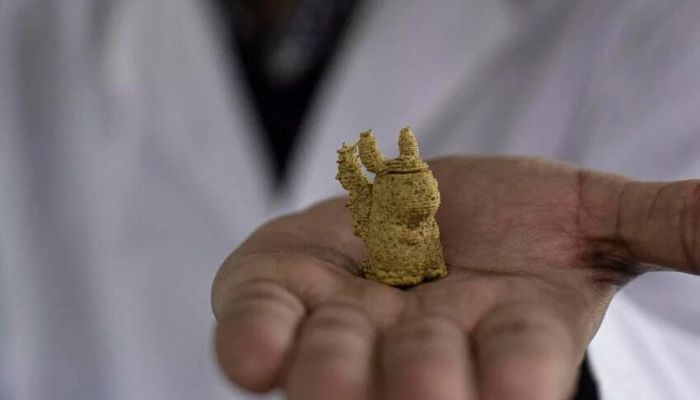 It is clear that 3D printing plays and will increasingly play a very important role in our lives. A clear example of this is the number of new developments in the food sector related to this technology. 3D printed food has all the advantages brought by using 3D manufacturing but applied to the culinary world. Therefore, there are many chefs around the world who are already turning to the technology in their kitchens. That being said, having a 3D printer in a restaurant is an expensive option and therefore many restaurants cannot afford it. Others use 3D printers as  way to attract consumers, as is the case of the restaurant Cocina Hermanos Torres, a Michelin-starred restaurant.

Currently, there are a lot of companies that are dedicated to 3D printing chocolate, in fact, there are universities that are studying how to find the perfect crunchy chocolate through topological optimization. Multiple companies are looking to reinvent chocolate and adapt it to the digital age. To do this, master chocolatiers are combining additive manufacturing technologies with their traditional techniques. In this way, they successfully develop different ranges of chocolates with unique shapes and exclusive flavors. One example is Mona Lisa 3D Studio, a company that 3D prints your creations or designs in chocolate scale.

As unlikely as it may sound,  3D printing has now even found its way into the beverage market. The abundance of possibilities, that are enabled by using 3D printing, gave new beverage printing companies innovative ideas to print drinks in many ways, making them a new trend. Amazing ideas such as 3D polycapsules at the bottom of biodegradable cups, that are activated with the addition of water to make smart energy drinks, or 3D artwork, created inside a glass filled with a cocktail, the options are endless! With additive manufacturing making its debut and just barely scratching the surface of what is possible in the beverage industry, it is highly likely that we will see many new and exciting projects emerge in the near future. 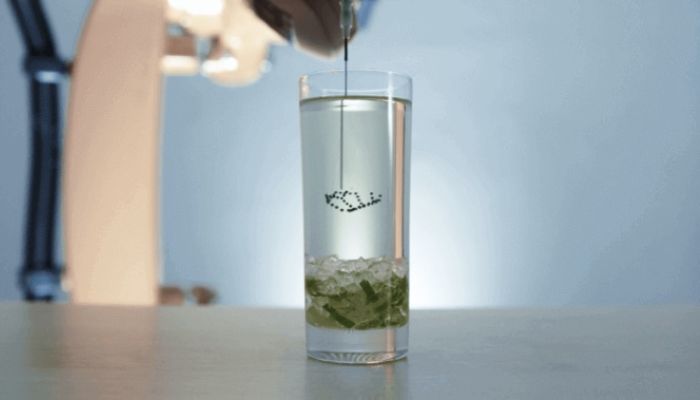 As you might have guessed from the 3D printed chocolate, desserts can also be created with the use of additive manufacturing! For those with a sweet tooth, there are a number of 3D printed cakes that look as good as they taste. For example, Nina Métayer decorated this cake with the rose window of the Notre Dame de Paris, which was reproduced perfectly using 3D printing. But making Mont Blanc in cake form is no problem either, as Chef Francisco Migoya has shown. Using milk chocolate, marron glacé pieces, crispy meringues, heavy freeze-dried cream, and a crumbled vanilla cookie as a substitute for the pie crust, he conjured up this pie, printing out a 3D model of the famous mountain for the purpose. 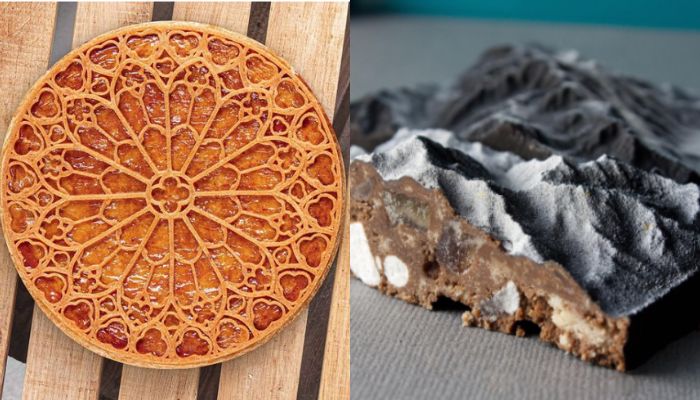 UAUProject, which originates from a studio in Warsaw, Poland, has set itself the goal of generating no waste and no emissions and placing a particularly strong focus on the aspect of sustainability. The products, which are based on personalizable and individual kitchen utensils, are produced by 3D printing from plant-based bioplastics such as PLA and are fully recyclable and compostable in industrial plants. In order to counteract overproduction, the UAUProject has focused on production to order in order to be able to act sustainably in a more targeted manner. 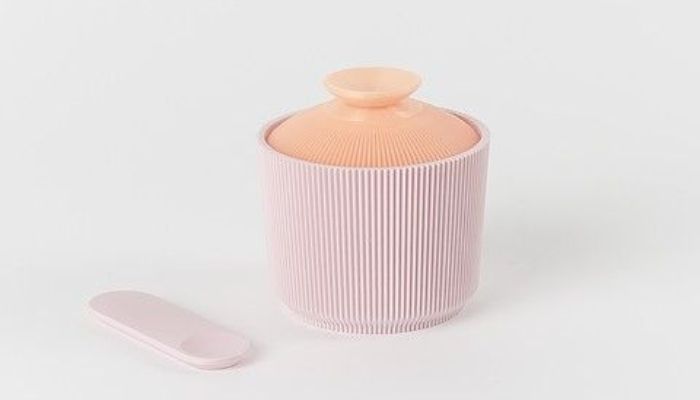 In addition to the interesting projects previously mentioned, the use of 3D printing in the circular economy within the gastronomic field is also worth mentioning. And yes, although it may seem strange, there are also many projects dedicated to the reuse of food waste for use with 3D printing. Companies like Upprinting Food, based in the Netherlands, seek to take advantage of food waste to give it a second life by creating sustainable and uniquely designed food. But not only can food be created anew, there are also other initiatives that use these leftovers to create everyday objects. For example, the Barbara Gollackner studio launched last year an original 3D printed tableware made from industrial food waste. Called Wasteware, the tableware includes plates, cutlery and even bowls – interesting initiatives to promote recycling and the circular economy! 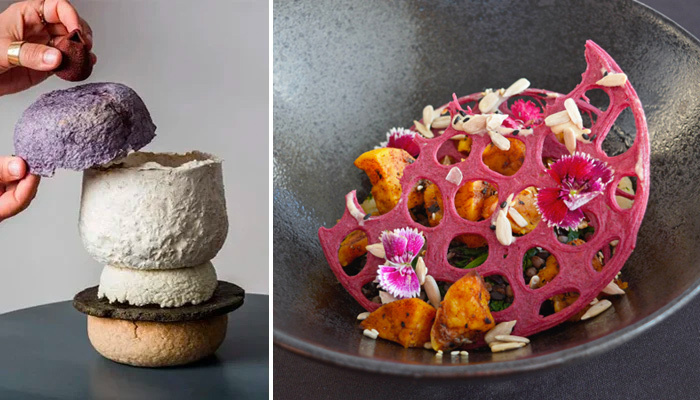 On the right, a plate made by the startup Upprinting Food. On the left, part of the Wasteware tableware,

Objects to Preserve Your Food

When buying fruits and vegetables, it’s not always easy to ensure proper preservation – you’ve probably thrown away overripe or even rotten produce. To prevent this food waste, designer Lea Randebrock came up with the “Clay Pantry” collection: these are 3D printed objects made from clay that help preserve food. And to make it work, the objects have been designed to be watered, like plants -; clay is a porous material that will allow water to evaporate and thus cool the food inside. The collection includes several pieces that can all be integrated into smaller or larger living spaces. 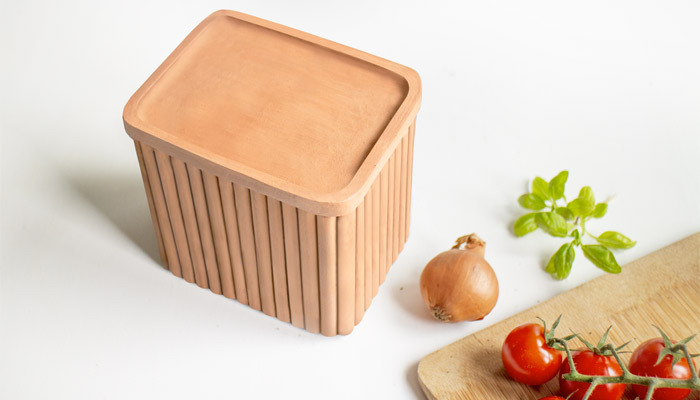 What do you think of food 3D printing? Will you adopt it in your kitchen? Let us know in a comment below or on our Facebook and Twitter pages! Don’t forget to sign up for our free weekly Newsletter, with all the latest news in 3D printing delivered straight to your inbox!