ETH (Swiss Federal Institute of Technology) Zurich is very active in the field of additive manufacturing. This is shown not only by the numerous partnerships but also by the long list of spin-offs, among which some companies, such as 9T Labs, are dedicated to 3D printing. Now, the technical university has partnered again and is thus engaged in a brand new 3D printing project: Together with the Swiss foundation Origen, they will be making a cultural site made of concrete which will be 3D printed in spring 2022.

Specifically, this is a 75-foot (23-meter) high tower that is being built in the village of Mulegns on the Julier Pass. The charming little village currently only has 16 inhabitants – a concern that is close to the heart of Giovanni Netzer, director of the Origen Foundation. He wants to bring life back to the little village and preserve its culture and history. After reopening a hotel, he is now planning the White Tower project with the help of architects and engineers from the ETH, who have drawn up the design and are planning the construction method. The art site will be made of 3D-printed, organically shaped white concrete columns and will have four floors, ranging from four to eight meters high. At the top of the tower will be a dome where performances can take place. 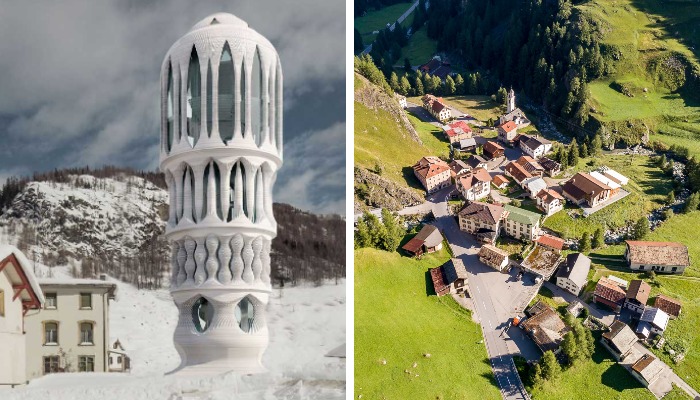 The 3D printed cultural site will be in the small village of Mulegns (photo credits: Hansmeyer/Dillenburger)

3D printing as a construction method

In order to be able to create the complex geometries of the tower and to use the concrete exactly where it is needed for the supporting structure, the project team opted for additive manufacturing as the preferred construction method. In fact, at about 75 feet (23 meters), the planned cultural site is one of the tallest 3D printed structures ever built by robots. There are several factors to consider when planning such a work of art in 3D: ETH professors must work on the right concrete mix, as well as the structural integrity and the connections of the printed concrete elements. Two advantages of the 3D-printed tower are that the construction uses less raw materials overall, as there is no need for formwork, and that the concrete elements can be separated from each other, so that the cultural site could be dismantled and rebuilt somewhere else.

Yesterday, June 22, the project was presented by the foundation for the first time. The President of the Swiss Confederation, Guy Parmelin, and Mario Cavigelli, member of the government of the Canton of Graubünden, were personally convinced. Detlef Günther, ETH Vice President for Research, was also present to support the project. If everything goes according to plan, a public construction site will be set up in April 2022. The robot will apply the white concrete layer by layer, taking just two hours to build a three-meter-high column. For those who are curious, there is great news: Everyone can watch the construction of the white tower on site. You can get all further information in the official press release. 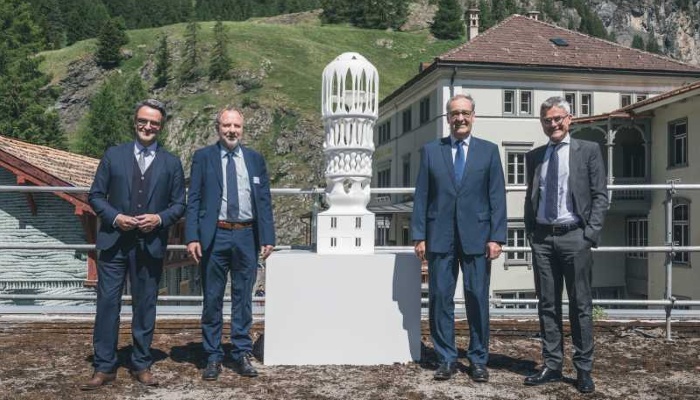 What do you think of this 3D printed tower? Let us know in a comment below or on our Facebook, Twitter, and LinkedIn pages! Sign up for our free weekly Newsletter here, the latest 3D printing news straight to your inbox!

ICON Completes First 3D-Printed Home Sale in the US