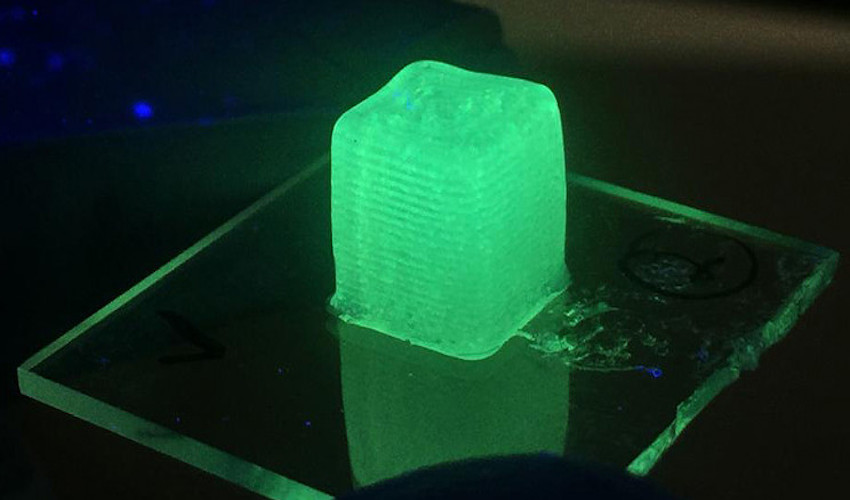 A new 3D printing technique has been developed by the researchers from the University of California, Davis. The paper detailing the approach was published in the Proceedings of the National Academy of Sciences of the United States, one of the most selective and prestigious science journals in the world. Their approach uses a droplet-based microfluidics AM system and a new type of nozzle, different from the one typically used in the extrusion-based 3D printing process.

As you know, when it comes to the traditional extrusion-based 3D printers, the filament is pushed through a nozzle to form the final structure layer by layer. This method is efficient and cost-effective. However, it poses two problems: firstly, it makes it very challenging to print structures made of more than one material and secondly, getting the right amount of softness is quite difficult too. That’s where the new droplet-based technique comes in to solve these problems. 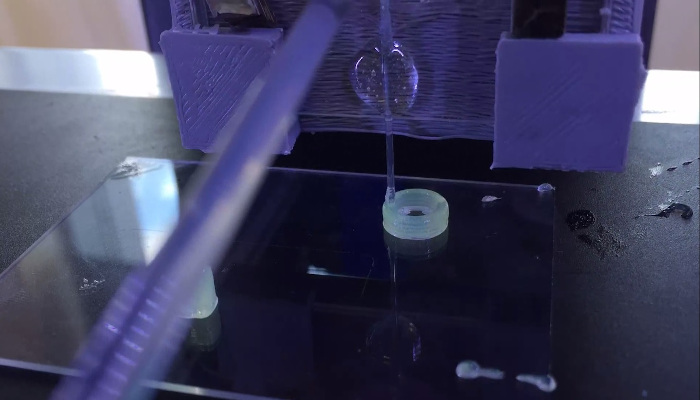 Jiandi Wan is the chemical engineering assistant professor at UC Davis who led the team of researchers working on the project. Wan and his team aimed to develop an approach for extrusion-based 3D printing that would allow the modulation of the extruded filament at the point of print, by using droplet inclusions. The researchers noticed that the nozzle used in extrusion-based 3D printers is very similar to another type of device the team was studying: glass capillary microfluidic devices. These devices use multiple nozzles placed within each other. Therefore, Won and his team realized a similar model could replace current printheads used in 3D printing.

The newly developed device uses a multi-phase drip system to encapsulate droplets of PEGDA (aqueous polyethylene glycol diacrylate) solution inside of a common silicon-based polymer PDMS (polydimethylsiloxane). The PDMS flows around a dripper, creating minuscule droplets of the PEGDA which are then inserted into the PDMS as both materials flow onto the 3D printed piece as it is being produced. 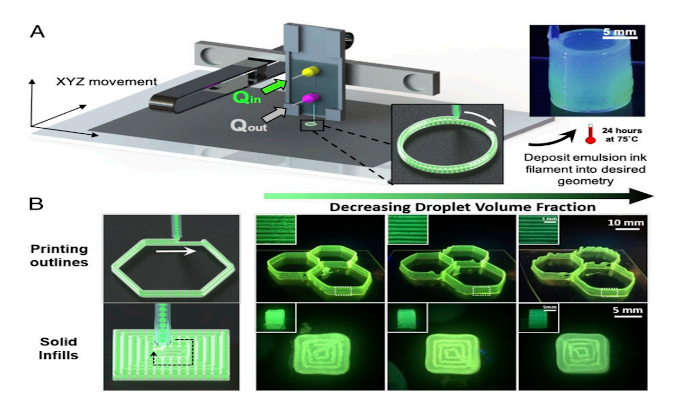 The final structure of the device somewhat resembles the famous “Pac-Man maze” with dots of PEGDA droplets surrounded by PDMS. Once the PEGDA diffuses out of the droplets, it interferes with the polymerization process of PDMS, causing the material to soften and making the structure more flexible. The structure flexibility can even be further modified by altering the droplet size and flow rate.

Soon, the new technique might find its application in bioprinting, soft robotics and wearable electronics. “I think this will open a new area of research, since applying the established microfluidics technology to 3D printing represents a new direction to go,” Wan says.

What do you think about this droplet-based system? Let us know in a comment below or on our Facebook and Twitter pages! Don’t forget to sign up for our free weekly Newsletter, with all the latest news in 3D printing delivered straight to your inbox!