DLP Can Be Used for the Creation of Better Rubber Parts 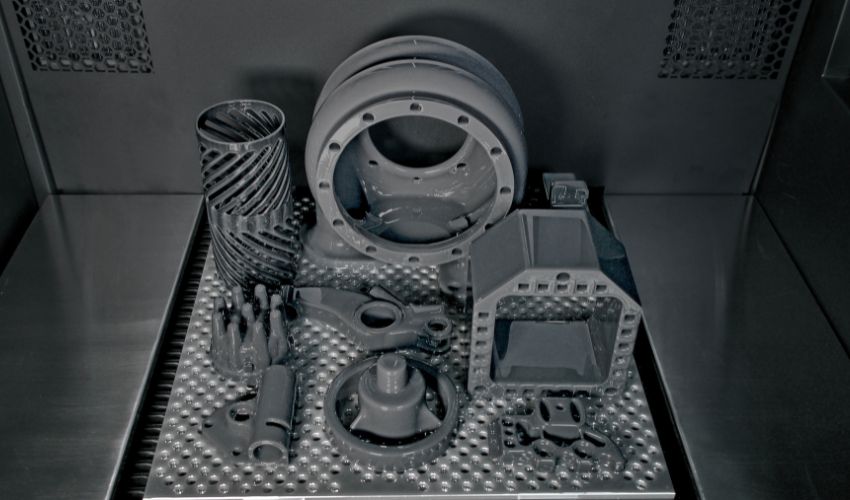 Digital Light Processing (DLP) is one of the major 3D printing technologies available today. A type of photopolymerization, it essentially consists of the use of a video projector to cure photosensitive resins. The technology is popular both for its speed and accuracy and can be used in any number of industries. And it continues to improve.

The first company to commercialize the technology, EnvisionTEC, has made huge steps forward over the years. And since its acquisition last year by Desktop Metal, which split the company into Desktop Health and ETEC, it has shown its most exciting innovations in the field including top-down DLP, the development of new materials such as rubber and more. But how does DLP work? What exactly are the innovations that ETEC has made in the sector? And most importantly what are the applications for the technology? We took a closer look. 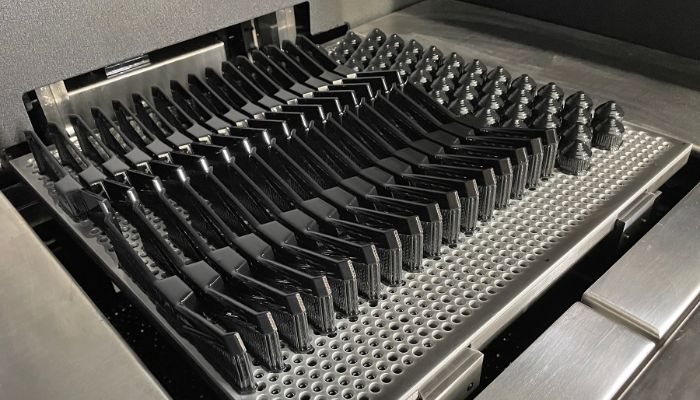 How Does it Work?

Photopolymerization, or the curing of photosensitive resins with UV light, can be considered the parent of additive manufacturing. As you might know, the very first 3D printing technology was stereolithography in the 80s. However, not long after that, new technologies started to arise to address the problems inherent in SLA. This includes DLP which came into existence in 1999.

Thanks to the use of a DLP chip, digital light processing was able to harness the light from a projector to cure photosensitive resins in area-wide 3D printing. The technology is faster than SLA, as it allows the entire build area to be exposed to UV light instead of a single curing point like with a laser, while still allowing for high quality surface finish and defined edges. This put the technology as a benchmark among vat polymerization methods.

Essentially, a traditional DLP machine works from the bottom-up, with a projector located below the vat. This was the process that was used with the very first commercial DLP printer, the EnvisionTEC Perfactory. Thanks to its location on the underside, the light from the projector can transmit through the bottom of the tray into the resin, allowing for the layer height to be quickly and tightly controlled. The tray is made with a clear bottom allowing for the transmission of light and then, similar to other resin technologies, the build plate moves up and down the z-axis into the vat of resin, creating a thin layer which can be cured. 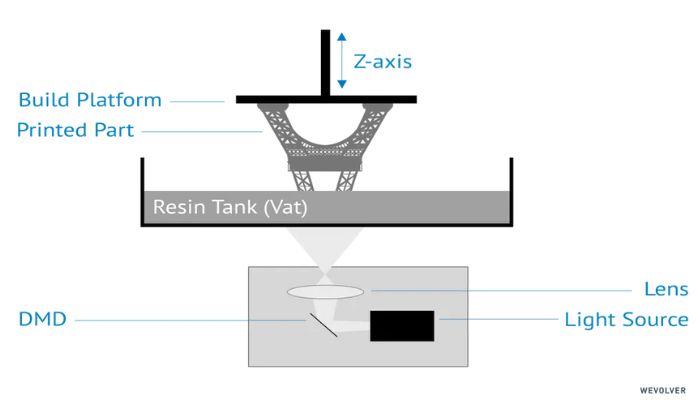 Since that first printer, there have been a number of advancements in the field. In 2015, the CLIP process, which included a layer of oxygen delivered through an oxygen-permeable film, eliminated the need to separate each cured layer, vastly increasing speed. The application of this “dead zone” was launched by EnvisionTEC in 2016 in a new process called CDLM, or continuous digital light manufacturing.

In 2021, after EnvisionTEC’s acquisition by DM, yet another new technology was launched, Hyperprint, which eliminated the need for oxygen layers. According to Desktop Metal, Hyperprint uses heat to decrease the viscosities of the resins to speed up printing. It additionally included Closed Loop Printing, with CLP sensors, to detect when the part layer has been fully separated from the film of the resin vat.

The latest advancement from the company has been in the field of top-down DLP. Although bottom-up DLP has been the standard for the past 20 years, ETEC launched the Xtreme 8K top-down DLP printer to address a number of limitations that existed with bottom-down DLP printing. This newest machine has a number of advantages for users, including an expanded material portfolio for even more applications and represents the latest in DLP technology.

What Are the Benefits of the Xtreme 8K DLP Printer?

Users can expect a number of advantages when using the Xtreme 8K DLP 3D printer from ETEC, beyond the general benefits of DLP technology such as speed and complex geometries. For example, previously when using bottom-up DLP, users faced restrictions on how many parts could be printed as there was a limit on how much weight could be sustained vertically from a build plate and a need for a large amount of supports to ensure adhesion. Additionally, there were serious constraints on the types of resins that could be used since the recoating necessitated those which had a low viscosity. This thus limited throughput and final material properties.

The Xtreme 8K DLP printer is able to overcome these obstacles, offering the largest DLP build area (450 x 371 x 399 mm – 166,950 mm2) among commercial, production-grade DLP printers thanks to top-down DLP. It is capable of printing large parts or in high-volumes with new materials that DM claims can compete directly with the thermosets used in traditional plastic injection molding. 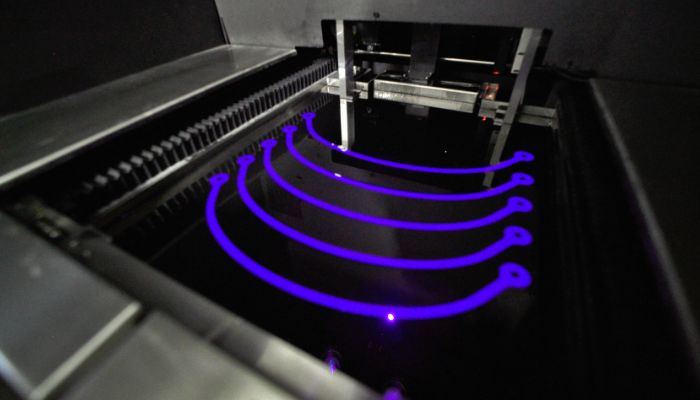 Notably, these material advancements have been made possible by DM’s work in research and development through their subsidiary Adaptive 3D. This company succeeded in creating a new material family, DuraChain Photopolymers. These are one-part, one-pot photopolymers that use Photo Polymerization-Induced Phase Separation, or Photo PIPS. Some examples include foams and rubber materials. This, among other characteristics, has opened printers using DLP to many new applications in a variety of industries.

DLP is Being Used to Revolutionize Rubber Parts

One of the most exciting applications for ETEC’s top-down DLP has been for the manufacturing of rubber parts. Notably Aerosport Additive, an Ohio-based service bureau that produces prototypes and working models for customers in sectors like automotive, aerospace, electronics and more, found that ETEC’s DLP technology and the Xtreme 8K top-down DLP printer were the key for the creation for better rubber parts.

Before adopting DLP, Aerosport Additive needed to rely on either urethane casting for prototyping and low volume production, and injection molding for mass production of rubber parts. That was because the creation of rubber parts has always been a challenge in additive manufacturing, with it almost impossible to even create materials that had the look, feel and performance of real rubber. Now this is no longer the case. 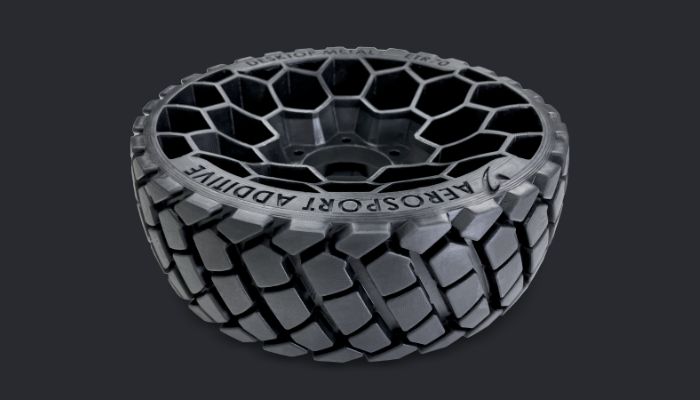 Thanks to the Xtreme 8K top-down DLP 3D printer and new materials, Additive Aerosport is capable of producing parts made out of rubber (photo credits: ETEC)

By using the Xtreme 8K and Adaptive3D’s Elastic ToughRubber, the company was able to produce parts made out of rubber with a Shore A70 hardness quickly and cheaply. One example of this was the creation of four-way switches which are attached to the control sticks on airplanes and are crucial for making fine adjustments to the plane’s trim controls.

As you can imagine, these parts are generally made in lower volumes, but turning to urethane casting was a slow and expensive process. With the ETEC Xtreme 8K, Aerospace Additive can now produce up to 150 switches in a single 2.5-hour build, saving on both time and expenses. Additive manufacturing additionally allows for the ability to change or fine-tune the design to fit the needs of different customers. This, among other applications, shows how ETEC’s DLP processes could continue to impact even more industries in the years to come. You can learn more about ETEC and its DLP solutions HERE.

What do you think of ETEC’s innovations for DLP technology and its use for rubber parts? Let us know in a comment below or on our LinkedIn, Facebook, and Twitter pages! Don’t forget to sign up for our free weekly Newsletter here, the latest 3D printing news straight to your inbox! You can also find all our visdeos on our YouTube channel.