A Guinness World Record Diamond Ring Made With 3D Printing 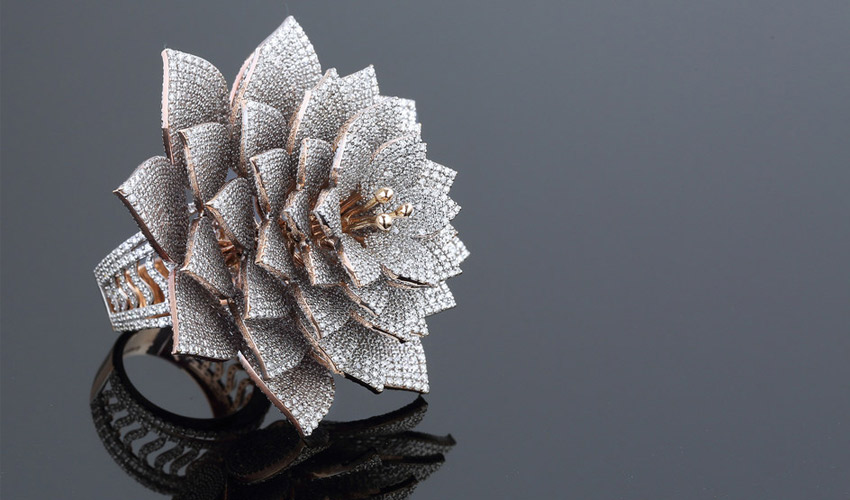 Imaginarium, a 3D printing service based in India, broke a surprising record last year when it contributed to the creation of the ring with the most diamonds in the world: 7,801 to be exact.  This record was entered in the Guinness World Records last September and was made possible thanks to additive manufacturing. Named The Divine – 7801 Brahma Vajra Kamalam, the ring was modeled using computer-aided design (CAD) and its mold was 3D printed using direct castable resin before being cast in gold. A long-term job that started in September 2018.

In the jewelry sector, more and more players are turning to 3D printing to create more complex custom molds. The goal is to 3D print the model of the jewelry with wax. It is then wrapped in a refractory material, thus making it possible to obtain a mold. The wax inside is then heated to create a vacuum inside the mold, which will be filled with molten metal – gold, silver, bronze. The mold is then broken to obtain the final product. Thanks to additive manufacturing, jewelers can imagine  and create more original models, which would be impossible to obtain via conventional manufacturing processes. 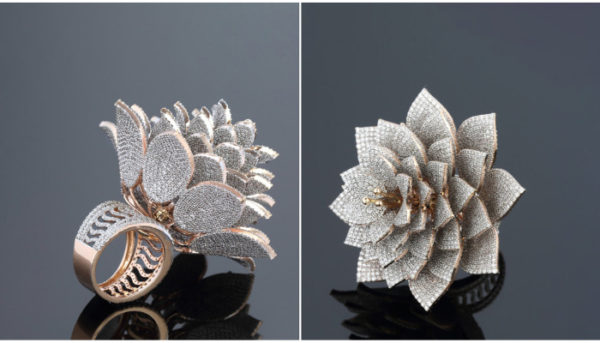 The Divine in its final form (photo credit: Imaginarium)

This is surely what motivated Kotti Srikanth, manager of Diamond Store by Chandubhai, to use the Imaginarium printing service. His goal was to design a ring with as many diamonds as possible, which involved knowing exactly where each would be placed. After imagining several iterations, the designers of the ring explain that they ultimately opted for a flower shape, more specifically a Himalayan camellia flower. This would offer a perfect balance between traditional and more modern forms.

CAD modeling made it possible to see how many diamonds it was possible to place into the design and once the file was ready, the collaboration with Imaginarium could begin. The 3D printing service explains that it divided the ring into seven sections namely six flowers and the ring. Each flower has a different size allowing them to be stacked on top of each other. A RapidShape resin machine was used to 3D print the model of the ring: the material would be directly castable making it easy to create the gold piece. 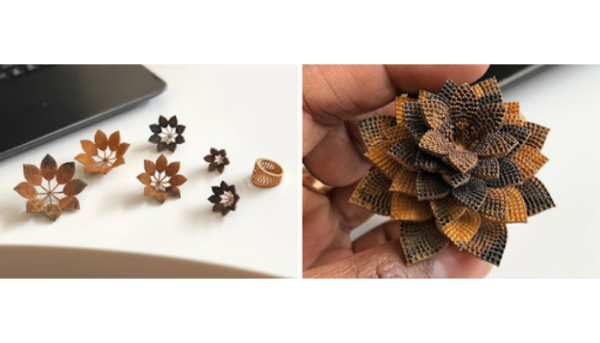 The different sections of the ring in castable resin (Photo Credits: Imaginarium and Guinness    World Records

Kotti Srikanth adds, “Imaginarium were able to manufacture the petals and the ring in the shape we imagined using high-quality materials. We received the castings very quickly and Imaginarium even helped us ascertain the number of diamonds once we had set them in the ring.”

Though the record was beaten last November with a ring containing 12,638 diamonds, Srikanth’s ring is significant because of the role that 3D printing played in its creation. You can find out more about Imaginarium HERE.

What do you think about the role of 3D printing in jewelry? Let us know in a comment below or on our Facebook and Twitter pages! Sign up for our free weekly Newsletter, all the latest news in 3D printing straight to your inbox!