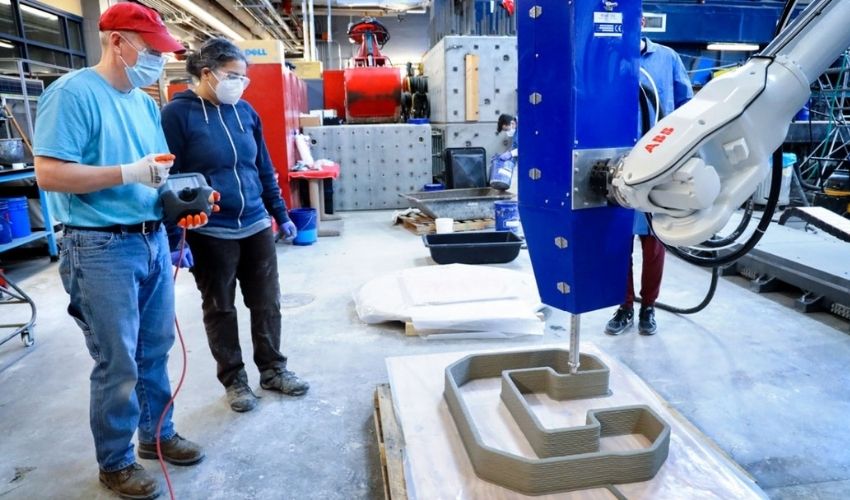 The Bovay Civil Infrastructure Laboratory Complex, located in the basement of the Thurston Hall at the Cornell University in New York, recently purchased an industrial 3D printing robot. The roughly 6000 lbs heavy machine has the ability to 3D print the kind of large-scale structures that could potentially transform the construction industry in the future.

The benefits of 3D printing are many, with sustainable materials, efficient production speed and the elimination of tons of waste being just to mention a fe.. That is why many industrial areas have already established 3D printing into their daily production routine and remain eager to find yet more ways to apply it to future projects. Over the last few years 3D printing has been growing significantly, having become a solid part of the car manufacturing, the aerospace and even the biomedical industry. When it comes to the concrete printing sector however, the state of additive manufacturing is not yet as advanced as it is in others. Although many projects have already been realized, construction engineers as well as researchers still have many questions about how, for example, 3D printed structures will stand the test of time in the years ahead. 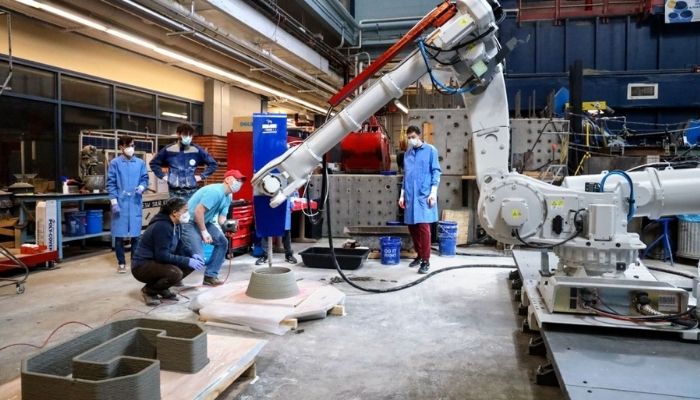 To find more answers to these yet still remaining questions the Ivy League university in Ithaca, NY recently purchased the heavyweight robot which will help them conduct research on the field of concrete 3D printing. Derek Warner, professor of civil and environmental engineering at the Cornell University, said  it, “Robotic masonry (brick laying), printing with recycled plastics and printing with metal at a large scale are all exciting areas with lots of room for growth, both in terms of science and understanding, as well as technology and engineering. The scaling of many of the phenomena controlling the build processes are such that they need to be studied at a scale near to that in which they will be used. The same applies to some of the phenomena controlling performance. Plus, there are always the unknown surprises that occur when up-scaling early-on with a new technology.”

As previously mentioned, the 3D printing robot, called IRB 6650S, weights around 6000 lbs and has an impressive reach of ~13ft, while being on a rail that spans an additional ~12ft. By owning the high tech machine, which arrived at the laboratory complex in early February, the Cornell University is blessed with many researching opportunities, only very few other educational institution in the country have. In addition to that, the system will also enable the students at the College of Engineering faculty to do robotic construction research, giving them a first touch of experience in the field.

Sriramya Nair, assistant professor of civil and environmental engineering, explained “We are giving them an opportunity to learn something that’s cutting edge and happening right now, the more they know, the more they can be champions of change, but also know what the limitations could be.” Referencing the robot system itself, she concluded “The robotic system is versatile and flexible. One of the ways we are using it is for 3D-printing of concrete, but it can be used in other ways, too. You can attach a welder or laser system. You can stack bricks or tie rebar. Many tedious processes can be automated.” To find out more about it, visit the Cornell University’s website HERE.

What do you think of the Cornell University’s new, 3D printing robot? Let us know in a comment below or on our Linkedin, Facebook, and Twitter pages! Don’t forget to sign up for our free weekly Newsletter here, the latest 3D printing news straight to your inbox! You can also find all our videos on our YouTube channel.