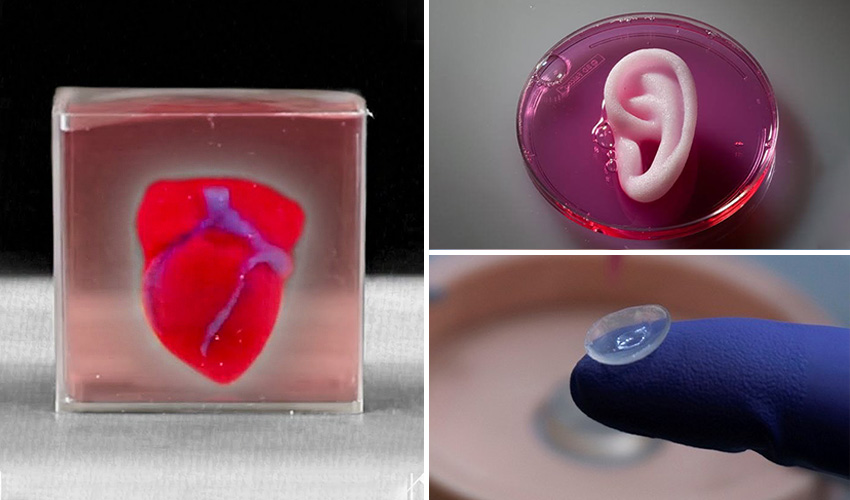 Bioprinting is a method that enables cellular structures to be made from bioinks loaded with stem cells. Layer by layer, the biomaterial is deposited to create skin, tissue or even an organ. Bioprinting projects are growing, and each new project is one-step closer to being a fully functional and viable solution. Laboratories and research centers are bioprinting human livers, kidneys and hearts. The objective is to make them suitable for transplantation, and viable long-term solutions. In fact, this method could allow to cope with the lack of organ donors, and to better study and understand certain diseases. There is still progress to be made but we wanted to present the main bioprinting projects in the listing below, including 3D printed organs and other human body parts!

Last April, a team of Israeli researchers presented a bioprinted heart the size of a cherry. The organ consisted of cells, blood vessels, ventricles and chambers: a first for the industry. The researchers developed a hydrogel from the patient’s own fat tissue, reducing the risk of rejection once implanted. The printing process would have taken only 3 to 4 hours. The heart is no bigger than a rabbit’s heart, but it’s an encouraging start. Note also the results obtained by BIOLIFE4D: the American company has succeeded in bioprinting a miniature human heart with ventricles and cavities.

In 2011, Professor Anthony Atala, Director of the Wake Forest Institute for Regenerative Medicine, presented a 3D bioprinted kidney for the first time. Within seven hours, his team was able to design this organ from stem cells. The kidney could not live for very long, but the project was full of promise. Since then, the printing work has continued. At Harvard, for example, researchers have succeeded in bioprinting a 3D model of a vascularized proximal tubule to better understand the structure and function of the kidney. 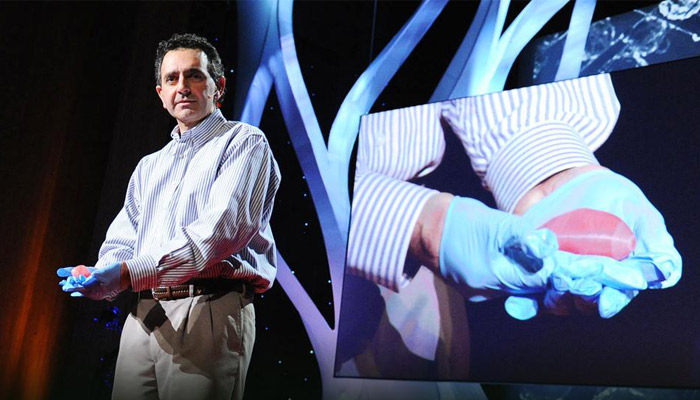 The World Health Organisation estimates that 10 million people worldwide require surgery to prevent corneal blindness, and 4.9 million already suffer from complete blindness due to corneal scarring. In 2019, researchers from the University of Newcastle developed a 3D printed artificial cornea for the first time that could be transplanted for people in need. After studying and gathering data from a volunteer’s eye, the researchers were able to design a 3D model of the cornea. One of the most challenging aspects was using the right materials to hold the concave shape of the cornea as well as finding an ink thin enough to squirt through a 3D bioprinter’s nozzle. Using only one healthy human cornea they were able to 3D print 50 artificial ones; a breakthrough advancement in ophthalmology. 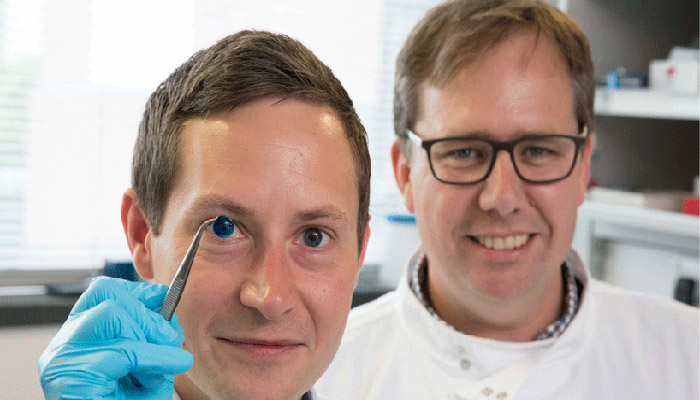 In May 2017, researchers from Northwestern University were developing a solution for women with fertility issues. Back then, they had succeeded in implanting a bioprinted ovary in a sterile mouse. Two years later, the researchers made some very promising progress. They were able to map the location of structural proteins in a pig ovary, allowing them to create a bioink to bioprint functional ovaries for human use. Additionally, the team explained that their methodology could be used to identify other types of proteins that could facilitate the creation of bioinks for other organs! 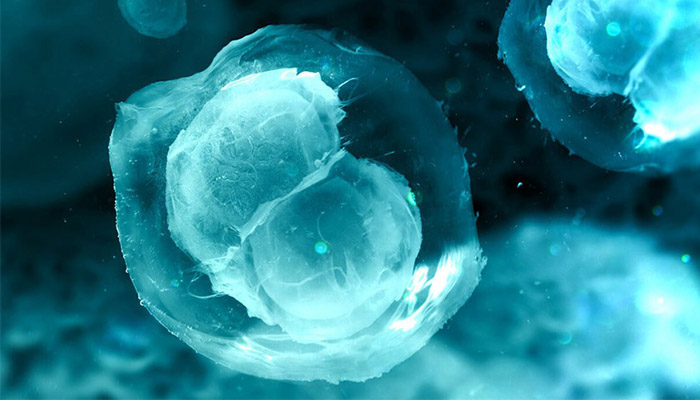 Researchers at the University of São Paulo in Brazil have succeeded in creating miniature versions of a human liver from blood cells. The process took only 90 days, from the collection of the patient’s blood to the production of the tissue. These liver organoids, developed using 3D bioprinting technologies, integrate the functionalities of the organ in question. These include the production of vital proteins, the storage of vitamins and the secretion of bile. To create the liver tissue, the team used the Inkredible bioprinter, marketed by the manufacturer CELLINK, one of the most recognized in the industry. 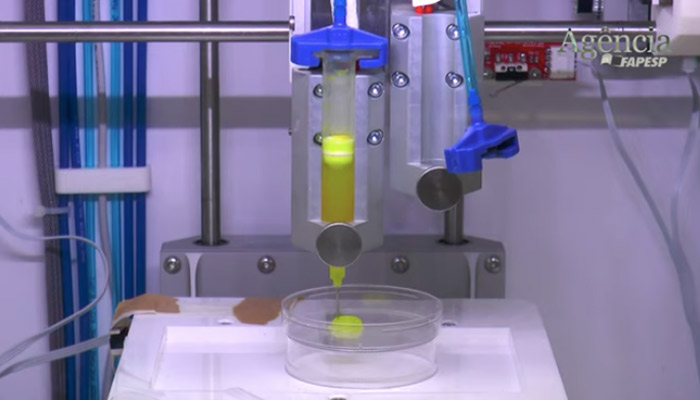 This bioprinting project was made possible through a collaboration between Queensland University of Technology (QUT) and Maia Van Mulligan, to help her regain her hearing. The HearSay Foundation, also involved in the recovery of the little girl, states that the 3D printed ear is fully functional and will allow Maia to hear again. The ear implant was created using the patient’s cartilage cells, reducing the risk of rejection once implanted. In addition, this type of custom-made bioprinting solution is actually less-expensive than other alternatives. 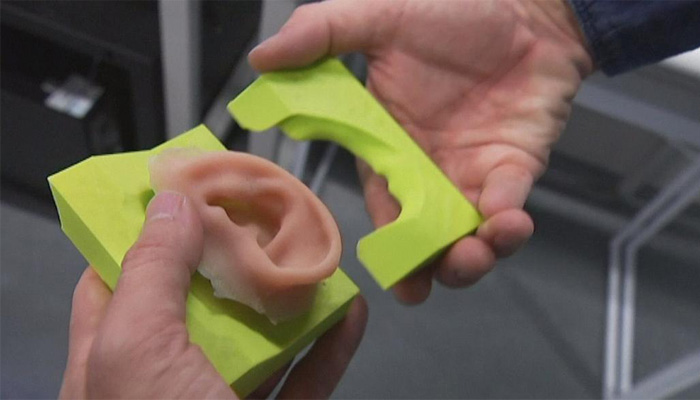 A team of scientists from the “Foundation for Research and Development of Science” has set itself the goal of developing a functional 3D printed pancreas by 2020, which will help diabetic patients avoid having to inject insulin and minimize the risk of related secondary complications, which often lead to death. For the bioprinting, a biopsy of the patient, and stem cell harvest is first performed. The cells are then converted into cells capable of producing insulin and glucagon. These are then used as bioink to print the pancreas. 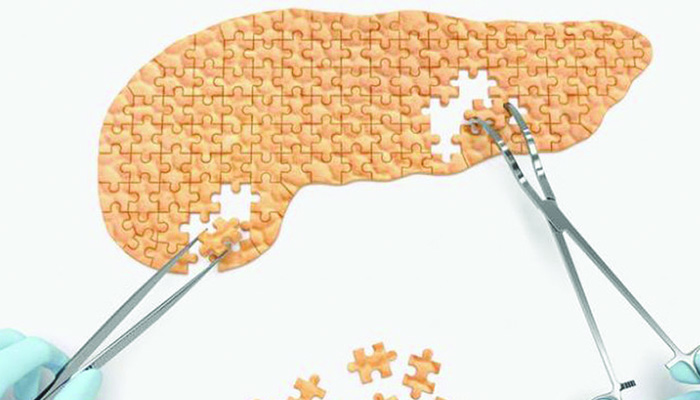 The market for bioprinted skin is growing steadily: according to BBC Research, the market will grow from 24.7 billion dollars in 2018 to 109.9 billion dollars in 2023. The startup company Poietis has developed 4D printed skin, which in the future could be transplanted for victims of burns or skin diseases. A software called Cytocentric CAD has been developed specifically for the printing process, which is designed to meet the challenge of imitating the body’s own tissue. This is 4D printing, as tissue components are precisely arranged in space and are also subject to the action of self-organization processes of the cells. By taking self-organizing processes into account, it is possible to create highly complex tissue structures that are very close to those of the human body. The 4D printed skin is clinically tested in a collaboration with the Assistance Publique – Hôpitaux de Marseille. Poietis’ long-term goal is “to place a bio-printer in every hospital to enable the production of personalized tissues and improve the waiting time of patients waiting for transplants,” says Dr. Fabien Guillemot, founder of Poietis. 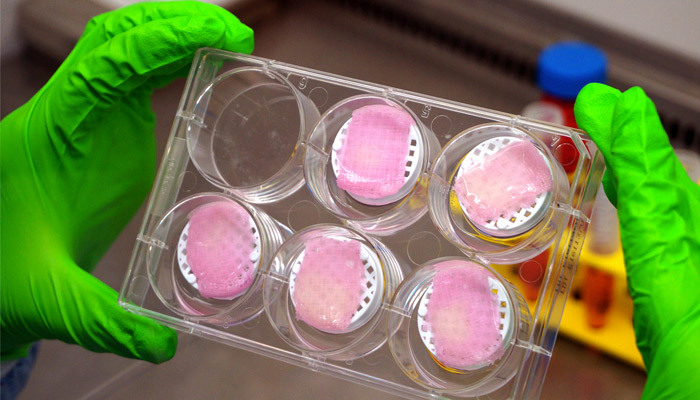