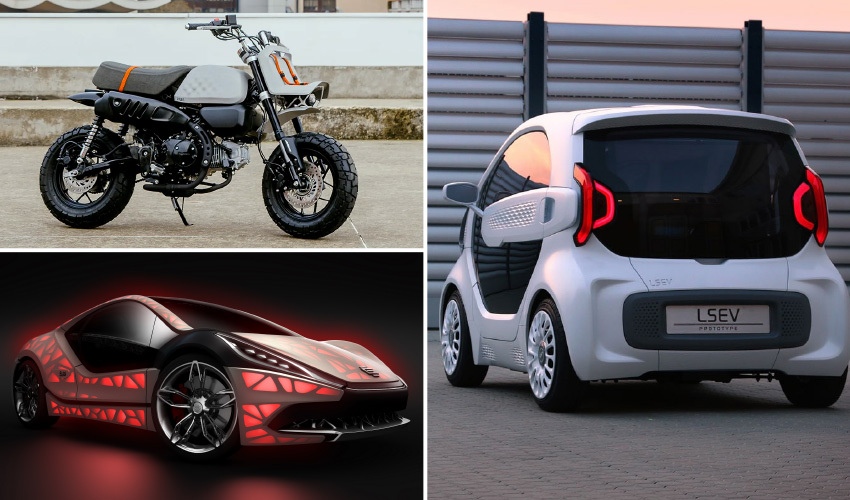 As you may have noticed, additive manufacturing is becoming widely popular in the automotive sector, and now, many vehicles are designed partially or entirely using 3D technologies. From sports cars to motorcycles to public transport buses, there are a wide variety of 3D-printed vehicles on the road! Without a doubt, additive manufacturing is changing production methods in the automotive industry. To highlight this growing production method for mobility, we have compiled a list featuring some of these vehicles that have been completely or partially created using 3D printing. Discover some of the most innovative designs and projects below with our list of the 15 best 3D-printed vehicles! 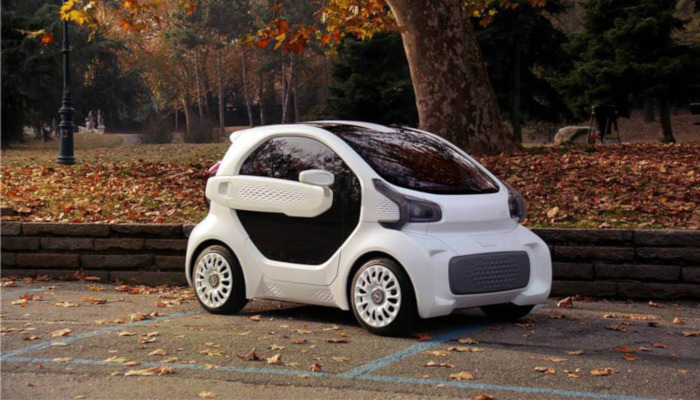 #2 The Blade by Divergent Technologies

The Blade from manufacturer Divergent Technologies is the world’s first 3D-printed supercar. Designed by Kevin Czinger, Founder & CEO of Divergent, the car is manufactured using carbon fiber tubes and 3D-printed aluminum rods. These two components are integrated into the chassis providing not only superior strength but also a lightweight vehicle. Furthermore, using additive manufacturing radically reduces the environmental impact of the two-door sports car. The car is ultralight-weight thanks to its 3D-printed body and chassis, allowing the supercar to achieve top speeds with a 720 hp (537 kW; 730 PS) power output and 7-speed Hewland sequential transmission.

First revealed at the Geneva Motor Show in 2015 by the EDAG group, a player in the automotive industry, the Light Cocoon car combines 3D printing and ecological materials. As with the Genesis project, also led by EDAG, the Light Cocoon has a bodywork 3D printed by the German printing service robotmech. Thanks to the benefits offered by additive manufacturing, such as customization and material savings, manufacturers have designed a body inspired by nature. To do this, they used printing systems dubbed SL-Tool Eagle, capable of printing parts up to 2 x 1 x 1 m. 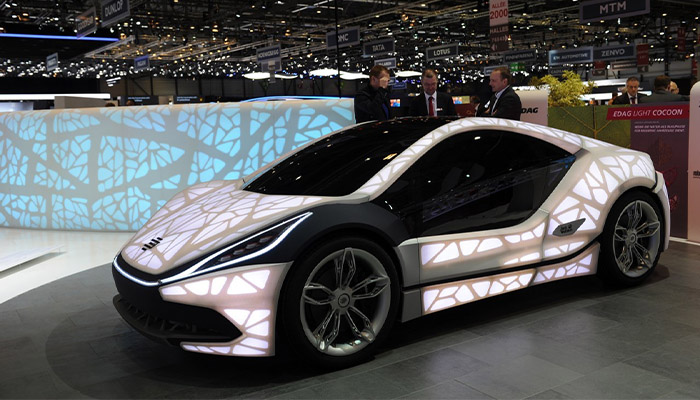 The result of a collaboration between Toyota and the International Automotive Research Center at Clemson University, the Toyota uBox has a modular 3D printed interior. It allows the vehicle owner to transform his car himself by 3D printing various parts. For example, it is possible to customize the door trim, some dashboard elements and the air vents. In addition, the uBox has a flat floor allowing the seats to be moved in different ways. Finally, the vehicle is equipped with an electric motor powerful enough to charge electronic devices as well as an electrical outlet, equipment that makes working inside the car possible. 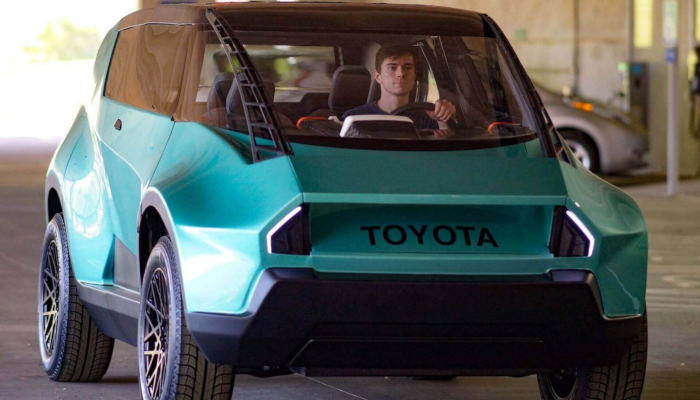 The car manufacturer Chevrolet is proving that it knows how to take advantage of additive manufacturing In the 2020 Chevy C8 Corvette, an impressive 75 percent of the prototype was 3D printed. The General Motors company has been using the technology in the development of its vehicles since the late 1980s and is particularly popular with the company’s designers. Thanks to the technology, they can make modifications quickly and easily and significantly shorten the waiting times between iterations. Thanks to the on-site 3D printer, the same part can, for example, be manufactured and adapted five times in the same week if necessary. It is also useful for testing the opening/closing mechanisms of the retractable collapsible hardtops. 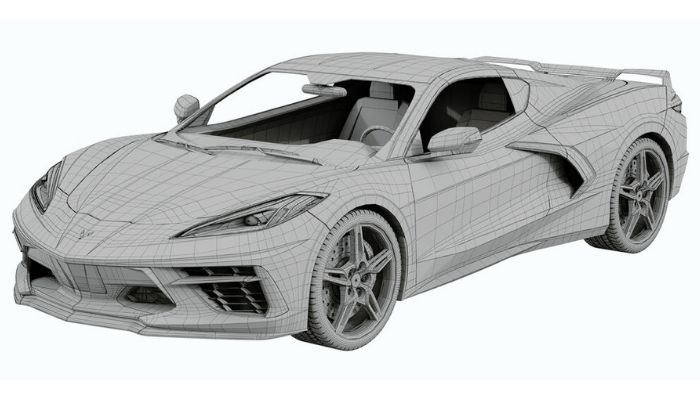 If the spirit of David Bowie could be visually expressed in a physical object, more precisely a vehicle, then it would look like this. At least when it comes to designer Takumi Yamamoto. With the concept vehicle, the Japanese designer wanted to merge his passions for design and Bowie’s music and relied on the know-how of the 3D printing experts Massivit 3D Printing Technologies and Marie 3D to make his idea a reality. The collaboration and use of large-format 3D printing ultimately resulted in a completely additively manufactured vehicle. A premiere, also for the “Festival Automobile International (FAI)” event, where the concept car was presented in 2019. 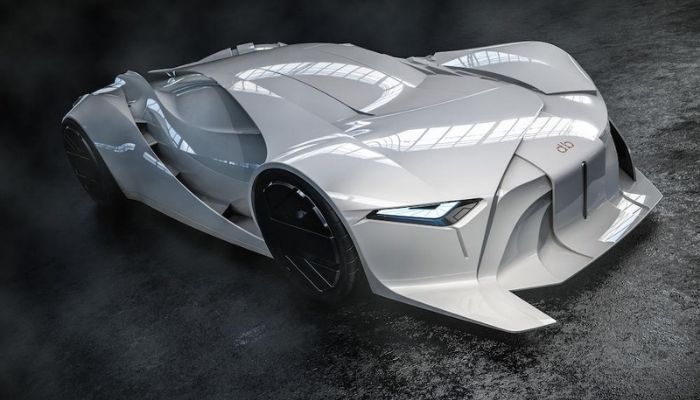 If you’ve been following additive manufacturing news for a few years now, then you’ve probably heard of the Light Rider, this electric motorcycle designed by APWorks, a subsidiary of the Airbus group. Developed in 2016, it incorporates a 3D printed chassis after 3D modeling work based on topological optimization. Using the powder bed melting process, the company produced an aluminum frame weighing only 6 kilos, resulting in a weight reduction of 30%. The total motorcycle weighs 35 kilos and can reach a speed of 80 km / h. 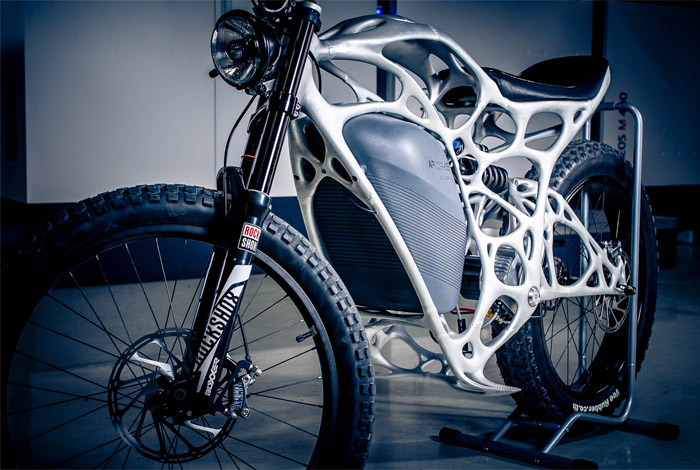 The German automaker has been using additive manufacturing for over 25 years now, both for rapid prototyping applications and finished parts. Its 2018 i8 Roadster is perfect proof of this: the car incorporates roof racks printed in 3D metal. The team behind this project used topology optimization software that calculated the available space and the weight of the load to be moved in order to print only the material needed. The result obtained is a 44% reduction in the weight of the support. BMW hopes to produce more such parts in the future. 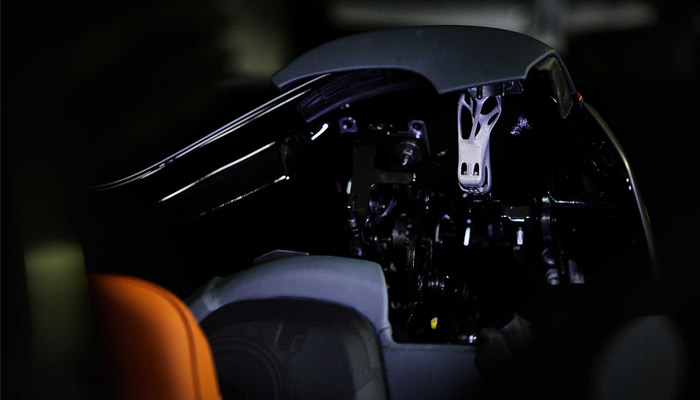 In 2016, Local Motors unveiled Olli, a 12-person minibus designed by additive manufacturing and artificial intelligence. This smart shuttle, created in collaboration with IBM, is able to answer passenger questions and offer restaurant suggestions, for example. The 3D printing process used is called BAAM for Big Area Additive Manufacturing and was developed by Local Motors within the National Harbor Lab. It allows you to print large-scale objects quickly. In 2019, the manufacturer introduced Olli 2.0, an improved version of the standalone minibus. With better range, two extra seats,and programmable lighting, Olli 2.0 would have a range of 160 km and a top speed of 40 km / h. If the autonomous minibus is currently used in universities, especially at California State University, it is likely that such vehicles will be democratized in the future. 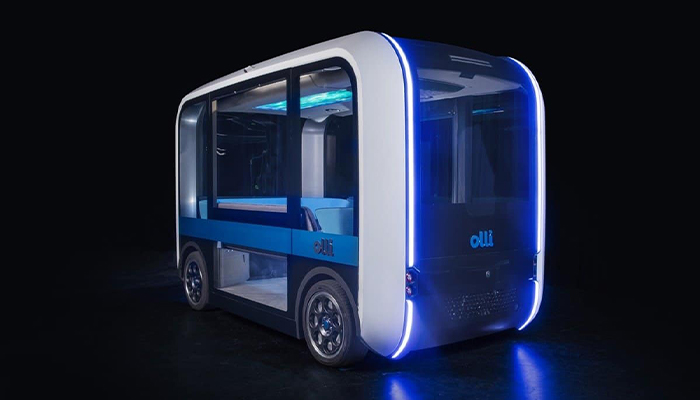 Urbee is actually the first car to be manufactured with additive manufacturing technology. The hybrid car was conceived and produced by Kor Ecologic who partnered with Stratasys. The project started in 2010 through the initiative of Jim Kor, CEO of the Canadian company, whose aim was to “design the urban vehicle of the future.” All parts of this car were 3D printed with the exception of the chassis and engine. The car required 2,500 hours to print. 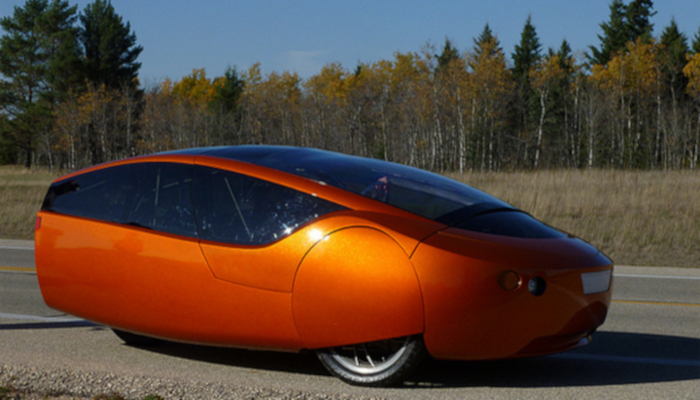 The British company Scaled wants to use the Chameleon project to manufacture vehicles that adapt to the needs of the driver and to environmental requirements—this fact also explains the name. So which technology would be better suited for a bespoke solution other than 3D printing? Scale states that it wants to move from mass production to individual mass production with additive manufacturing, thereby promoting a paradigm shift. Large-format 3D printing is used for Chameleon vehicles. The vehicle parts are robust and the cost of a Chameleon vehicle is lower than the cost of a single body part using traditional methods. It is also known that Scale was able to implement a topology optimization in terms of design in cooperation with Rafinex.

The British sports car manufacturer, McLaren, has opted to use 3D printing technologies on numerous occasions. Specifically, one of the 3D-printed vehicle models that have attracted the most attention is the McLaren 720S. In conjunction with 1016 Industries, McLaren created much of the vehicle’s body using large-format 3D printing. Among these parts, we find the spoiler, the hood, the outer door leaves, the bumper, the rear diffuser, etc. But this is not the only success of McLaren. They also opted for additive manufacturing to create lighter cores for the McLaren Artura hybrid car. In both projects the potential of 3D technology in the automotive sector is clear. 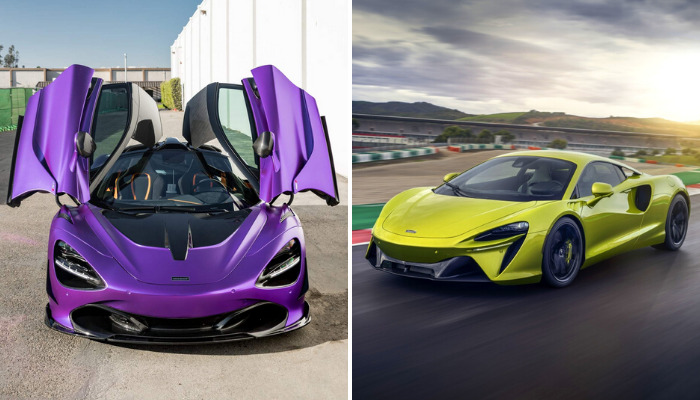 This 3D-printed electric motorcycle project stems from a collaboration between ETH Zurich and Sintratec. The idea of ​​this team of students was to change the mobility and transport of the future, making it a little more sustainable. To do this, they developed a prototype of an electric motorcycle through additive manufacturing. Called ETHEC City, the prototype features parts printed in 3D using 3 different methods: stereolithography, selective laser sintering, and laser powder bed fusion. To do this, the team used Sintratec SLS machines and turned to nylon as a manufacturing material. It also integrates a wheel drive system to save energy and improve its autonomy. We let you discover the details in the video below.

Based in California, Aptera Motors is a company dedicated to developing more efficient and safer vehicles, consciously managing the planet’s natural resources. The Aptera is a solar-powered electric vehicle, so it hardly needs recharging. The vast majority is 3D-printed and measures 4.4 m long, 2.2 m wide and 1.4 m high. The team at Aptera Motors prioritized lightweight structures, as well as aerodynamics and low-resistance cooling with the goal of optimizing energy efficiency and thus the vehicle’s range. This has also benefited the car’s performance, which is capable of accelerating from 0 to 60 in just 3.5 seconds. 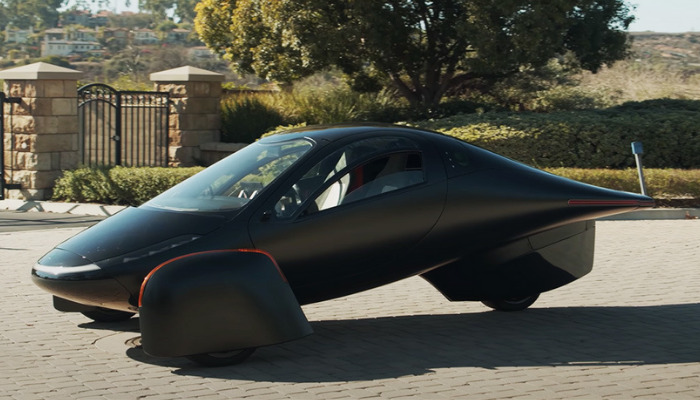 The French company Viba is a fan of additive manufacturing: it uses it to produce certain components of its refined motorcycles. His model Jane incorporates a 3D-printed aluminum fuel tank. The part was designed on a laser fusion machine, more precisely on one of the machines from SLM Solutions. Its honeycomb structure makes it possible to reduce the total weight of the component while maintaining sufficient rigidity. The Viba motorcycle is also equipped with a mudguard and a front rack, both 3D printed. 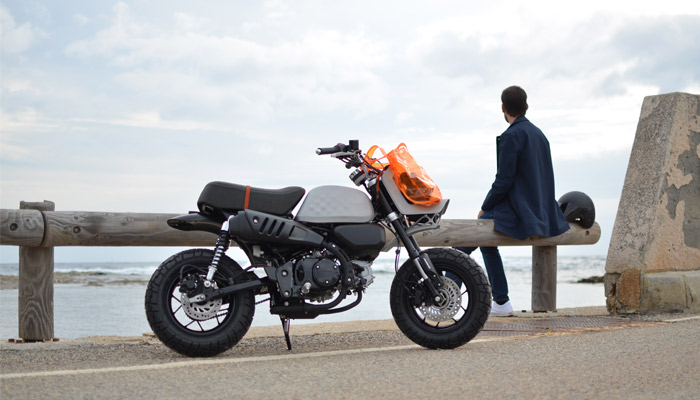 What do you think of this list of 3D-printed vehicles? Let us know in a comment below or on our Facebook and Twitter pages. Don’t forget to sign up for our free weekly newsletter, with all the latest news in 3D printing delivered straight to your inbox!