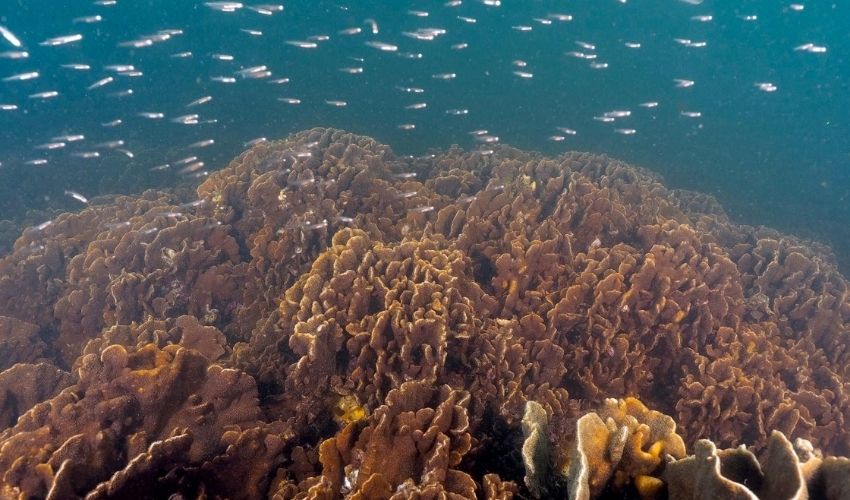 One of the greatest ecological problems facing our planet is the devastation that is facing coral reefs worldwide. These eco-systems are crucial to biodiversity of our oceans, yet they are being destroyed at an alarming rate. Already, up to half of the world’s corals reefs have been destroyed and signs show that this is not stopping. Indeed, as global warming continues, scientists estimate that coral reefs could be destroyed entirely worldwide. However, there is some hope. Projects have risen to try to restore coral reefs, notably archiREEF, a project from Hong Kong that seeks to use 3D printed terracotta tiles to restore marine life and corals in Hong Kong. We sat down with Vriko Yu to understand more about the project, how it works and how everyone can contribute to overall eco-system restoration.

My name is Virko Yu, I am the co-founder and CEO of archiREEF. We started working on 3D printed reef tiles for eco-system restoration, particularly for coral restoration for two years. However, I personally have been working on coral restoration for eight years. We are doing this restoration in Hong Kong which is not the best place for coral to grow. For decades our corals have been suffering from anthropogenic threats and natural stressors and they are still degrading. I have been working on finding out what has been killing them historically and what we can do right now. Indeed, I have been trying to restore the coral communities in Hong Kong for the past four years now and we have had very little success. We were in such a desperate state that we had to think outside of the box because there was nothing on the market that served our purpose. So we decided to create our own solution and that is when we turned to 3D printing. 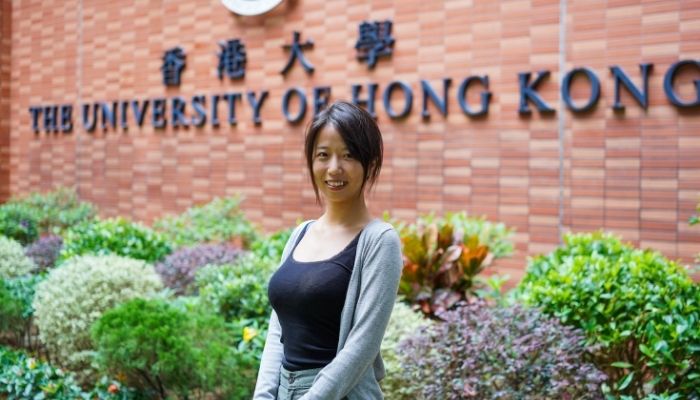 3DN: Tell us a bit about archiREEF and your project, why is it important?

As I mentioned, I am a scientist by training and coral restoration is quite a new topic in the science field, it’s only about 20 years old. And most of the time, this restoration is mainly the job of scientists or reef managers. So it has been quite an isolated field where only “relevant” stakeholders were involved. But when we first got the global media attention about the product, we were getting a lot of messages from all over the world asking if they could help and if they could do it in their own reefs. And I realized if we’re talking about coral restoration, it’s not just scientists it’s everybody. But it’s not accessible to the general public and that’s where archiREEF comes in. We want it to be as easy as planting trees, making it accessible and easy for everybody.

And for why it is important? Well, quite frankly, reefs are everywhere and globally, we have seen many are looking into these types of projects, especially for those heavily reliant on coral reefs, such as around fisheries and natural barriers. However, the most prominent examples we have heard from are the Great Barrier Reef and Florida. These two places have invested the most into coral science and the technology. It has not always been successful. For example, historically, one of the first spawned reefs in the US happened in the 70s. They wanted to revitalize a degraded reef area using old tires but it was mostly trash. And 30 years later, scientists realised that the tire as a material is not the best for recruiting foundational species and nothing came back or was recovered. Then they had to spend fives times more budget on retrieving the structures out of the water, using a lot of volunteers, mainly from the Navy and Army, and that was a well-known example of coral restoration, how it needs to be carefully designed. 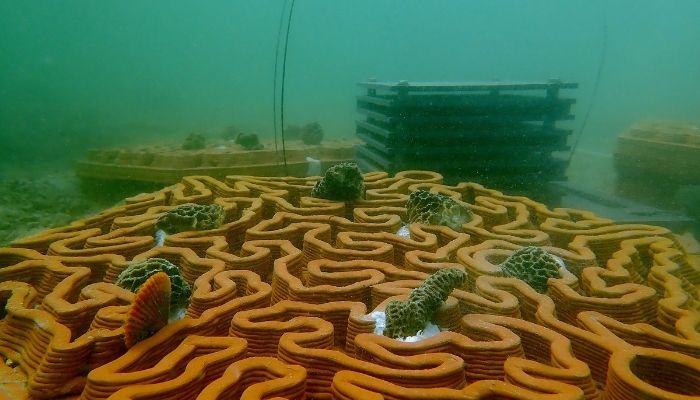 After that, people started thinking of using cinder blocks or bars just to have a stable structure to regrow. But these two materials have major issues, cement for example has high alkalinity, meaning not many corals will be able to tolerate it and settle on the structure. And wild metal rusts in the water and leaches toxic chemicals. So if you look up artificial reef structures, you see complex structures and this is replacing the function of reefs by providing habitats and structures. But we do not think this is right, coral is still alive and can recover. So the tiles are designed not to replace the reefs but to serve as a foundation for the coral, thus forming a basis for the species to return.

3DN: Why did you choose 3D printing for the archiREEF project?

There are a few reasons, first one is the adaptability. We wanted to create something that could be adaptive to any coral species anywhere in the world. The design we have right now is based on an algorithm and changing the parameters can change the design slightly. Since the ultimate goal is to restore corals anywhere, having that flexibility with the design is crucial and to accommodate it, 3D printing is the best solution. Not just because of how easy it is to make a new project with the parameters, but it’s a lot more time and cost effective. Those are the two major reasons. 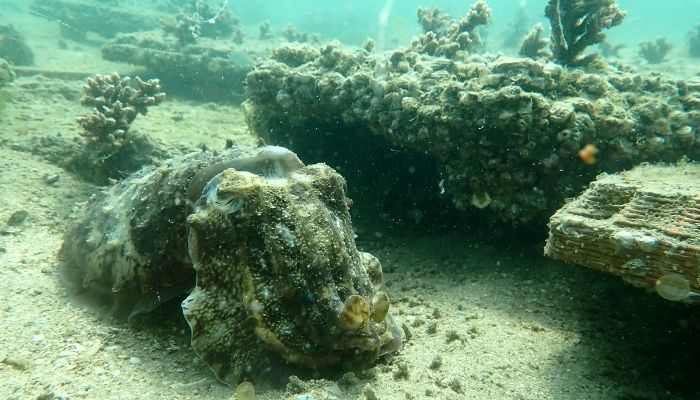 Already, the team at archiREEF is seeing progress with coral growth on the tiles (photo credits: archiREEF)

However, another one could be the increased complexity possible with 3D printing compared to traditional molding. If you look at our designs, 3D printing has allowed for a higher resolution when it comes to  little structures. In Hong Kong in particular, there is a lot of marine diversity, but they are the micro organisms, which need small and complex structures as shelters. With 3D printing, they could create the structures with much more details, better for the biodiversity.

3DN:  What are the challenges of printing using terracotta?

It is very challenging to use clay. First, because it is a natural material that can be sourced anywhere and the classification can differ since it can be affected by geology of different places. You need to have the experience to play around with the clay mix to understand the behaviour of it so that you can have better control and create a mixture that can be well-extruded during the 3D printing process. Speaking on that, you need the right clay, the right moisture, it must be well maintained, it is necessary to remove the bubbles before putting it in the extruder. It’s a complicated process. These are major challenges, but the best reason to use terracotta is that it is natural materials and marine life likes it. 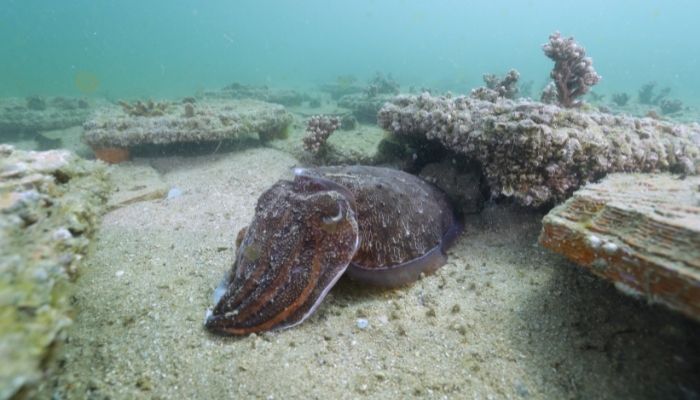 3DN: What progress have you seen since you started archiREEF?

The idea for the project started two years ago. Then, the design project and production almost took a year to have full sized production and to confirm the final design. We were a team of marine biologists and architects and designers, as you can imagine we speak very different languages. We were discussing and imagining a product that does not exist and it was such a huge challenge. I would describe something and it would become an entirely different thing for the designer so it was a long process. There were a lot of ideas changes and a bombardment of ideas and it a lot of fun working on this multi-disciplinary process. After this, we put it inside the water and inside the marine park, supported by the government, and we have been measuring the growth and how stable it is, especially since there are a lot of typhoons in Hong Kong. It’s interesting to see how the structures are able to survive despite the challenges. And apart from that, we are also looking into the ecological part, so not just growth but the enhancement on biodiversity. And we have seen quite a lot of success in that aspect. Though even, the coral survivorship is super encouraging. There has been 98% survivorship compared to the conventional methods, meaning that it is 4x higher than what you would usually expect to see.

3DN: What are your hopes for archiREEF? Do you see it moving to help revive reefs in other areas as well?

We are in such a critical time for restoring reefs. The UN has already set ecological restoration into the SDG goals 13 and 14. We have been doing that for years now and in 2021, the UN took a more progressive and aggressive action in calling this decade to be the decade of economical restoration. Because, it is not the last chance but  this period is critical. If we don’t do it in the next 9 years, even though we have the same or 10x more resources to work on ecosystem restoration, the result would be very different. This is the critical time to fix the problem, stop climate change and mitigate the damage done. And archiREEF isn’t necessary the only solution, but in an era that is so empowered by technology, there are a lot of people who could potentially make a huge difference. 3D technology helped us to work on it in a more effective way than in the past, giving us a much more effective solution. And ultimately, we want to engage everybody to contribute to the mission of ecosystem restoration. 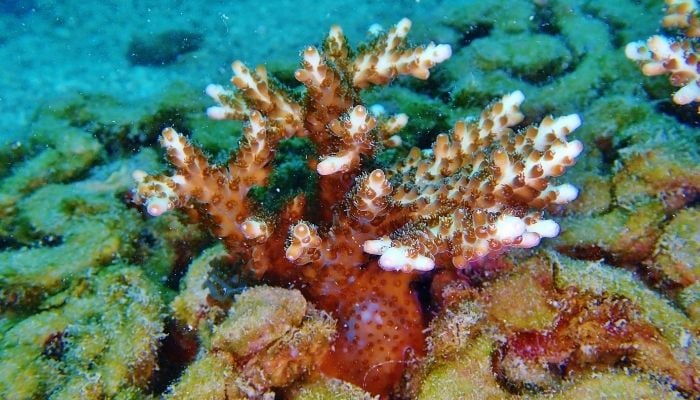 We are in an interesting era. We have all the technology accessible and the skills and we just need to come together to use this in a more inclusive manner. Everyone can contribute, don’t think you cannot do anything or that it is not your problem, this is OUR PROBLEM. If you are interested, you can find out more at archiREEF’s website HERE.

What do you think of archiREEF’s solution? Would you start a project to bring back coral restoration in your area? Let us know in a comment below or on our Linkedin, Facebook, and Twitter pages! Don’t forget to sign up for our free weekly Newsletter here, the latest 3D printing news straight to your inbox! You can also find all our videos on our YouTube channel.