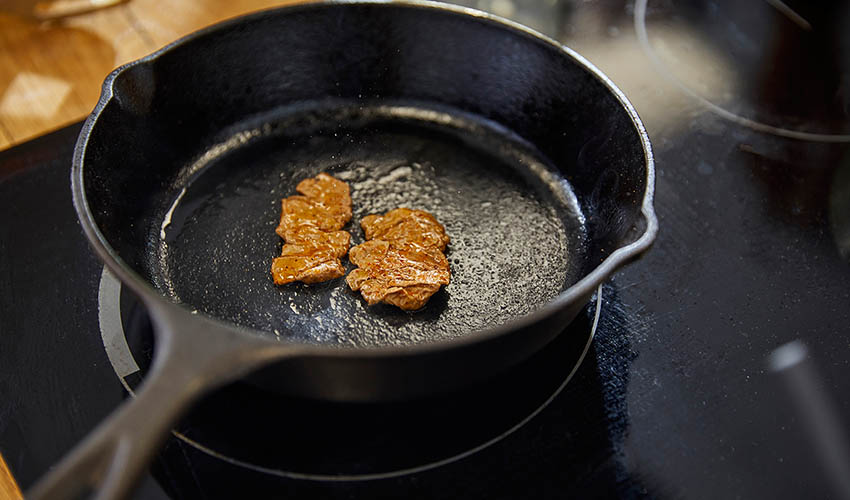 Aleph Farms is an Israeli startup that has developed a method to produce cultivated beef steaks. This method mimics the natural process of muscle-regeneration occurring inside the cow’s body, but under controlled conditions. The startup successfully 3D printed meat on the International Space Station – far away from any natural resources – its partner on this project is 3D Bioprinting Solutions, which lent its technology to facilitate this advancement. Aleph Farms’ mission is to provide access to safe and nutritious meat anytime and anywhere on earth, while using minimal resources. In order to learn more about this project, and its implications for our current production methods, we interviewed Didier Toubia, co-founder and CEO of Aleph Farms.

3DN: Can you present Aleph Farms to us?

Aleph Farms is a food company and global leader in the cultivated meat industry. Comprised by a passionate and devoted team of professionals, the company is making tangible impact in solving humanity’s greatest challenges today, including climate change and food shortages. Aleph Farms has been working side-by-side with 3D Bioprinting Solutions throughout this year in a fruitful cooperation which led to this historical achievement. 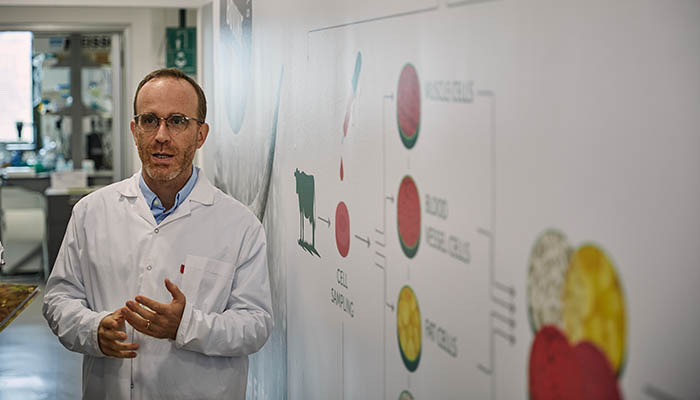 3DN: When Aleph Farms created? What is its mission?

Aleph Farms was co-founded in 2017 with the Israeli food-tech incubator, The Kitchen which is a part of the Strauss group, a global food and beverages company as well as with Prof. Levenberg from the Technion, a world leader in the space of tissue engineering.

In an historic report published on the 10th of September 2019, the Intergovernmental Panel on Climate Change, established by the United Nations, has emphasized the integral contribution of the conventional animal farming methods on climate change, creating “a challenging situation worse and undermining food security.” According to the UN, livestock farming and the meat industry accounts for 18% of human-produced greenhouse gas emissions into the atmosphere. Moreover, it requires over 15,000 liters of water to produce 1kg of beef with conventional methods*. Intensive animal farming serves as a major driver of biodiversity loss and contributes to deforestation and fires in the Amazons and is responsible for the destruction of soils due to monoculture of soy as animal feed.

In order to tackle climate change and ensure that we’re below 1.8 degree global warming, while promising food security to the growing world population (expected to reach 9 Billion by 2040), we must act. The food ecosystem must find ways of providing consumers with quality, healthy and ethical food – to anyone, anywhere, anytime – but with a fraction of the environmental footprint that this food has. The demand for meat is expected to double by 2050 and without finding solutions that could provide the same desired and history-filled products, we are, as a food company, not going to be able to fulfill our promise. 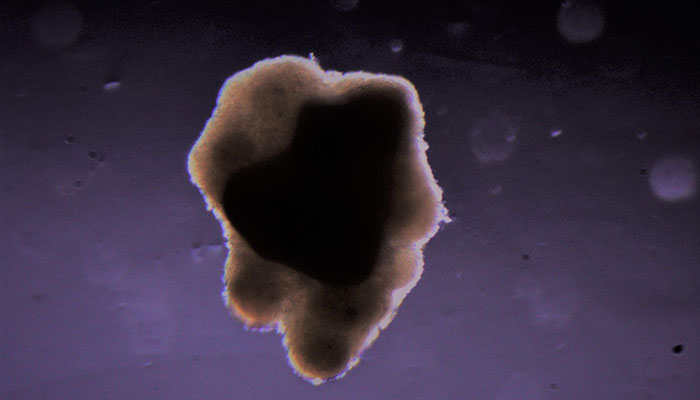 Aleph Farms aims to leave a better legacy for future generations and bring forward a food culture that is healthier, safer, more sustainable and doesn’t involve any animal suffering. By tackling the ecological and health-related issues associated with mass-production of meat today, along with the moral discomfort that consumers are facing with, the company provides a desired food product, which is a steak, without the downsides and the drawback of its product method. This  slaughter-free transition prompts more efficient solutions set to tackle fundamental problems in agriculture today.

3DN: The meat you produce is said to use limited resources, how exactly does it compare to the way we currently produce meat on earth?

In space, we don’t have 15,000 litres of water needed to produce one kg of beef according to conventional production methods. Space is the most scarce environment and the main challenge we are facing is our ability to produce real meat with minimum resources, in a respectful way to the environment.

When developing food for space missions and for astronauts, microgravity conditions, extended shelf-life, and nutritional requirements must all be primary considerations. The main difference between producing food on Earth and in space, derives from the dependency of the production method on local natural resources and their availability. In space, the production is hundreds of miles away from any available resource (land, water, etc) that is needed for the process. Like any other food product, our meat during the R&D phase is developed in the lab, but as we move forward with our timeline, it will be produced in bio-farms (facilities that remind breweries or yogurt factories). It’s expected that it will require only a fraction of the resources needed for producing conventional meat, thus, the experiment verifies this possibility. 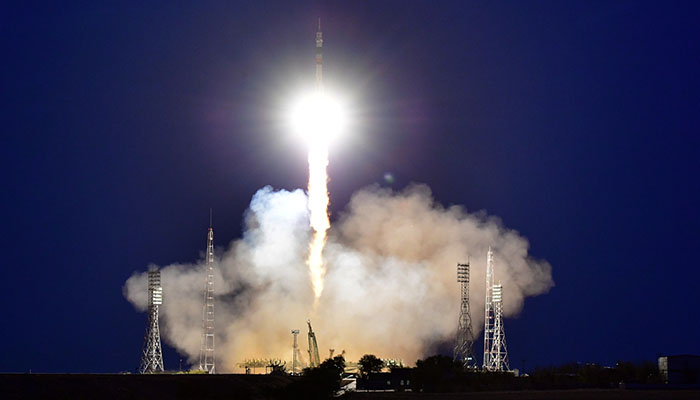 The project was led with 3D Bioprinting Solutions on board of the ISS | Credits: Aleph Farms

Today’s intensive, industrial agriculture is responsible for epidemics such as the African Swine Fever in Asia, it contributes to deforestation and causes fires in South America, it’s responsible for the destruction of soils due to monoculture of soy as animal feed, it’s accountable for the development of resistances to antibiotics – causing over 700,000 human deaths per year and growing. Intensive animal farming serves as a major driver of biodiversity loss and climate change. Knowing that the consumption of meat should increase by 50 to 70% by 2040, a radical transition is needed. Cultivated meat will be one of the solutions to mitigate this impact, alongside with regenerative agriculture and traditional extensive farming.

3DN: Finally, when do you think these meat alternatives will reach consumers?

At Aleph Farms, we aim to reach the market with a limited launch within 3-4 years with our cultivated beef steaks. We will start by building bio-farms where we will grow our meat at in large scale.

Aleph Farms has demonstrated its ability to cultivate together various cell types that after 3-4 weeks form a thin-sliced beef steak with a 3D structure as of the meat cuts we all love today. The challenge relies in the process of mimicking and even emulating the same conditions as inside the cow’s body. Those conditions; same nutrients, temperature and growth factors; enable the different cells to form the exact same tissue they would form inside of the mammalian body. 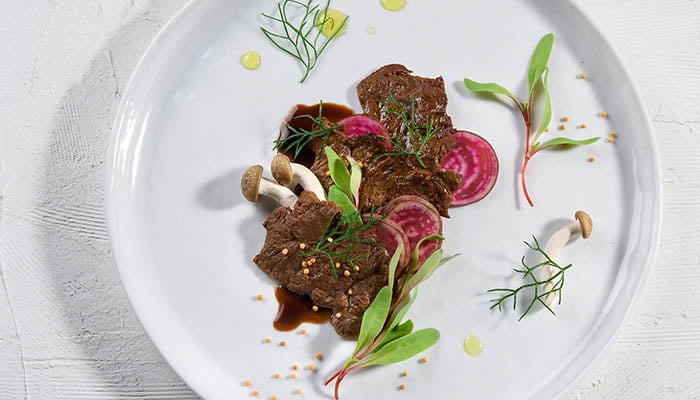 We aim to provide consumers a high-end product without any compromise on taste, smell and texture. The main remaining challenges we are working on are related to the scale-up process, the cost of the commercial products and the consumer education aspect.

During climate week few weeks ago, numerous climate strikes drew over 6.6 million people into the streets around the world, but most of the eyes still remained glued to the Big Apple for Climate Week NYC 2019, led by The Climate Group. During this week, youth leaders have been filing lawsuits, marching on the streets in massive numbers and putting pressure on world leaders to act. This critical time in history is emphasizing the urgency to act for the future generations’ sake. The decisions we take today will make up the future in which our children will live. Do we want them to look at Earth from space as it was blue? Or red?

It is time for us to remove the silos we have built over time and think about integrative solutions which are addressing a range of issues. An example for a solution like that is cultivated meat, which is going to be a new category of meat products. 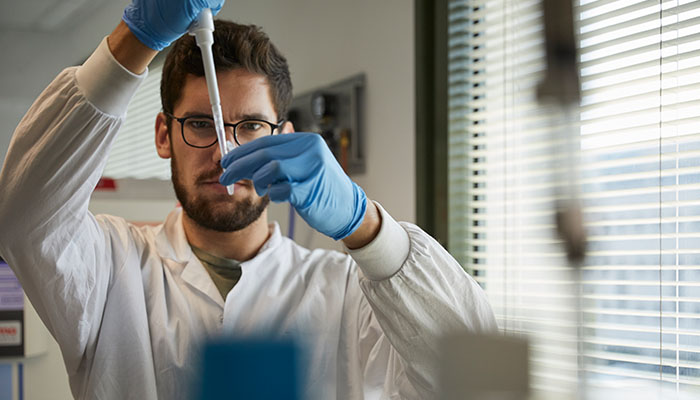 What do you think of Aleph Farms’ mission and work? Let us know in a comment below or on our Facebook and Twitter page! Don’t forget to sign up for our free weekly Newsletter, with all the latest news in 3D printing delivered straight to your inbox!