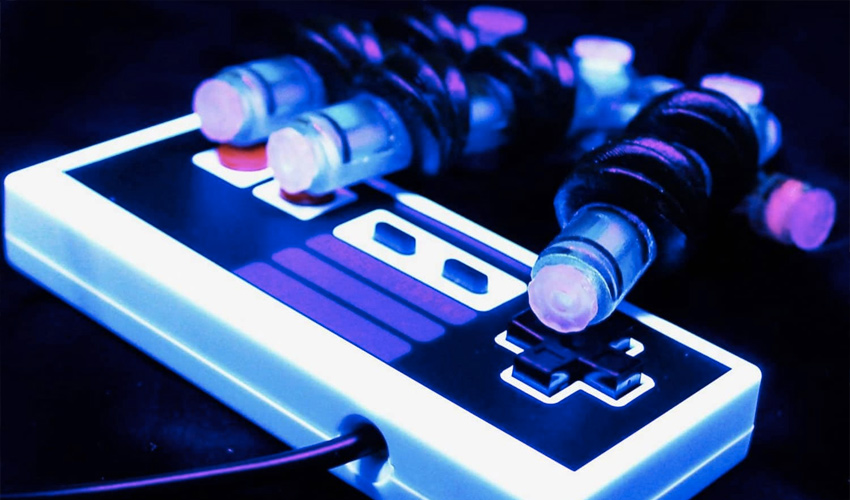 Engineers from the University of Maryland have used additive manufacturing to develop a 3D-printed robot hand capable of playing one of the most famous video games from Nintendo. Although it may seem like science fiction, the project is already a reality and has achieved very successful results. The programming of the finger movements making up the robot hand has enabled the hand to complete the first level of the video game Super Mario Bros. Of course, the team of researchers acknowledges that they could have performed a standard demonstration to evaluate the capabilities and performance of the hand, for example, playing a piano score. However, they found it more interesting to experiment with the precision required by the video game to achieve their goals, and so they did.

There are many initiatives today that combine the advantages of 3D printing and robotics. For example, a Cornell University project, which used additive manufacturing to create a robotic muscle capable of sweating and regulating its own temperature. Seeing the amount of research around this field, it is undeniable the great potential that both technologies have when combined. The authors of this project certainly agreed. As co-author Joshua Hubbard commented, “Previously, each finger of a soft robotic hand would typically need its own control line, which can limit portability and usefulness. But by 3D printing the soft robotic hand with our integrated fluidic transistors, it can play Nintendo based on just one pressure input.” 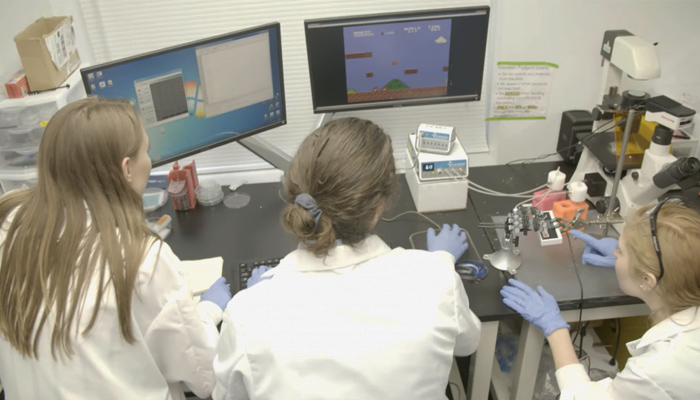 To develop the elements that make up the robot hand, Stratasys’ PolyJet technology was used. Soft robots, like the hand, are characterized by high malleability and morbidity, as they are made from flexible materials such as rubber or silicone. Specifically, the three 3D printed fingers integrate so-called “fluidic circuits”, which are controlled pipes so that the fingers can move simply with air, without the need for additional electricity. Ryan Sochol, co-author of the study, says: “These special types of robots are powered using fluids like water or air. Soft robots can stretch or be inflated or deflated relatively easily. As a result, they have inherent adaptability to reform around complex and sometimes delicate objects. What’s special here is that we made a new type of fluidic circuit that can sense the pressure types of air to decide how it’s going to behave.”

Instead of using semiconductor transistors to turn the movement signal on and off, as traditional electronic microchips do, the 3D printed soft robot took advantage of pressure sensors in each of the fingers that make up the hand. In this way, the movements of the fingers were controlled by the pressure of the air flowing through the hand. Regarding the precision and programming of the robot hand to play Nintendo, Sochol commented: “With a piano, we’d be able to set the tempo arbitrarily and any errors like missing a note wouldn’t have meaningful penalties. In contrast, the video game’s timing and level make-up have long been established and are invariable, with just a single mistake able to result in an immediate game over, so playing a game like Super Mario Bros. in real time provided a means for evaluating soft robot performance that was uniquely challenging and uncompromising.”

In view of the successful results obtained from this research, the use of these soft robots in other application areas, such as the medical sector, has become apparent. Since they can mold and expand around complex structures, soft robots could be implanted in the human body with little risk of tissue damage. This is undoubtedly a great area of research for applications such as surgical tools, drug delivery and customized prosthetics. You can find out more in the research article HERE.

What do you think of this 3D-printed robot plan that can play on a Nintendo? Let us know in a comment below or on our Facebook and Twitter pages. Don’t forget to sign up for our free weekly newsletter, with all the latest news in 3D printing delivered straight to your inbox!

What is a G-Code and What is its Use in 3D Printing?