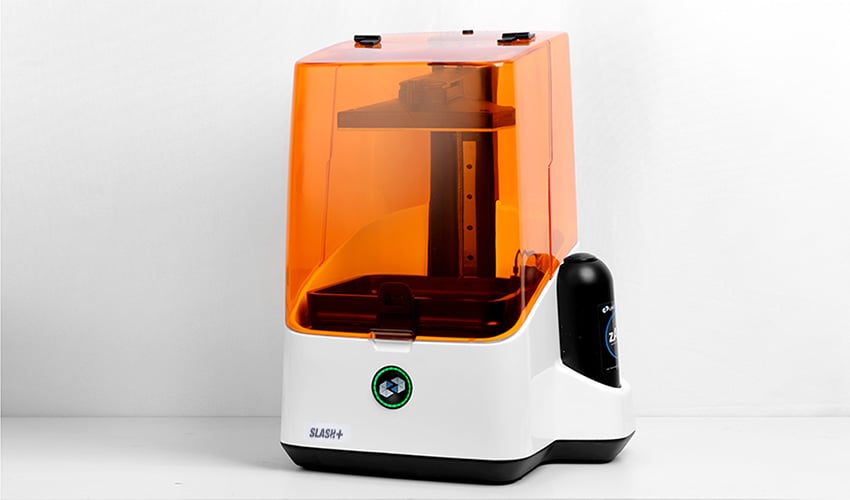 In 2016, the manufacturer UNIZ3D made itself known by collecting the sum of half a million dollars on Kickstarter for a high-speed resin 3D printer named Slash. Their secret? Use an LCD rather than a laser, and use an optimised cooling system (called Cooling System) of the printing process, all for a selling price below the 5,000 € mark.

So more recently, the company launched their first upgrade of its 3D printer with Slash Plus. With an advertised print speed of  200mm/h, the Slash+ is the fastest 3D desktop resin printer on the market. On the performance side, the UNIZ3D printer has an XY resolution of 75 microns for a minimum layer thickness of 10 microns. 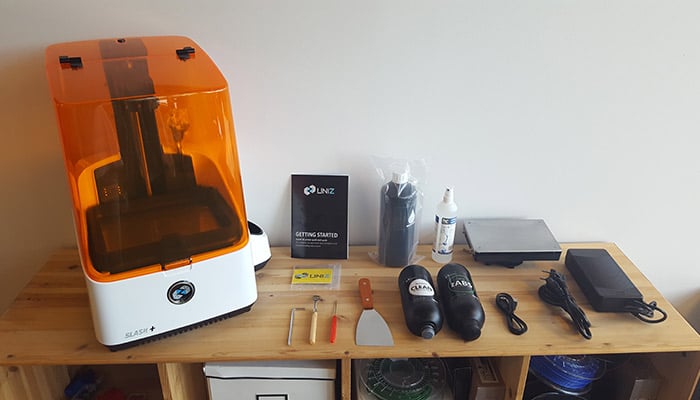 The Slash + 3D printer from UNIZ3D and its various accessories

To weigh the price to performance, we had the pleasure of receiving the machine within the 3Dnatives Lab thanks to a loan from its French distributor Atome 3D. Find below a comprehensive test to find out how the Slash+ 3D printer really is. Is it really as fast as advertised? Has the speed of production been favoured at the expense of print quality? And more globally, can Slash+ compete with other desktop 3D SLA printers?

The Slash+ 3D printer is delivered in a well thought out package, although, do to its size, you will have to call for someone to help you get the printer out of it. When opened, it displays the following dimensions: 350 x 400 x 530 mm similar to Form 2 Formlabs (350 x 330 x 520 mm). Visually, the Slash+ is equipped with a white frame made of carbon fiber and reinforced steel that suggests a solid machine. The first visible point is the absence of a control screen. This implies that the management of the printer will run directly through the computer software.

The accessories that come with the machine include the printing plate, resin tank, power cables and a quick start guide. But also a green zABS resin cartridge and an empty cartridge for cleaning. Along with resin and various tools such as an Allen key, two sizes of spatula, a needle to open the resin cartridges and finally sandpaper for finishing. As part of this test, the distributor Atome 3D also provided us with a resin cartridge of 1L White Snow White from Funtodo (sold at a price of 50 € HT) and an isopropyl alcohol spray, essential to clean your parts at the output of the printer. 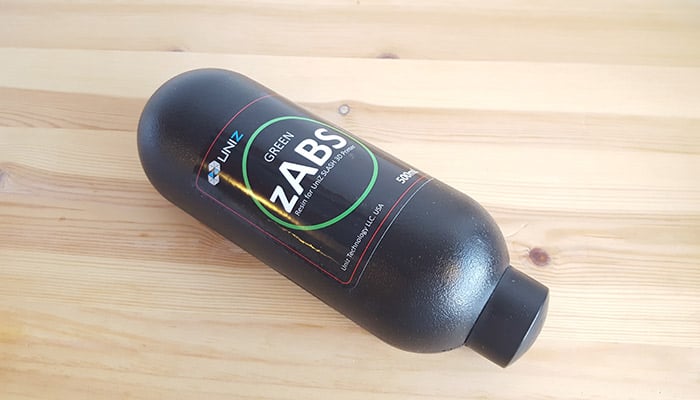 To start the machine, you can follow the guide provided (in English). The first step will be to connect the power supply and then connect your machine to your WiFi network to activate the product. However, you will need to perform two actions that are not specified in the paper guide but are well explained in the UNIZ3D YouTube channel videos. Remove the protective film located between the LCD screen and the resin tank and install the resin level sensor.

You will then be able to install the resin supplied with the Slash+ 3D printer. Simply insert the cartridge into the appropriate space (carefully remove the cap). Then drill it with the needle in the accessories, and finally refit the cap on the other end of the bottle. In order for the resin to empty automatically into the tray, you will have to wait to install the printer software.

Although getting started is rather easy, we must admit that the documentation provided is relatively simple. Basic and not necessarily obvious information for neophytes is missing. This such as resin replacement, machine maintenance or print media management. Various unofficial guides, written by a growing community, have emerged on the web, like this one. You are also invited to watch the many video tutorials on YouTube, including those of the UNIZ3D channel. 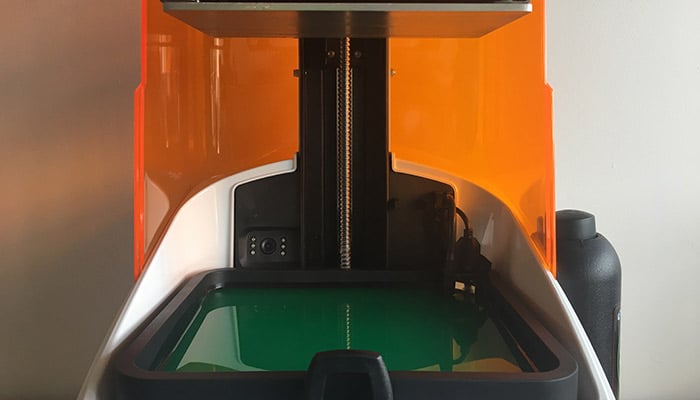 Regarding materials, although the brand offers its own range, UNIZ3D had the good idea to open its 3D printer up, allowing it to use competitors resins. In this test we were able to test the White Snow White resin from Fun To Do. To use it, you will have to manually pour it into the printer’s tank. This while also choosing the correct curing parameters in the software, such as the power of the LED or the light exposure time of each layer. Parameters that you can find in communities of users of the Slash+ 3D printer.

A last comment regarding the installation is the lack of a processing station, as the one included with the Form 2 from Formlabs. This accessory can easily be replaced by purchasing two hermetic boxes (Tupperware type) at a very affordable price. They will be able to do the job of cleaning the 3D printer parts from non-solidified resin as well.

Simply named Uniz, the software developed by the manufacturer is compatible with Windows 7 SP1+ and Mac OS X 10.8+. This is at the time of this test only available in English or Chinese. However, it has the merit of existing and offers an overall well done ergonomics. You will be able to make all basic changes to 3D files (move, rotate, zoom), generate print media (with the ability to add or delete specific media in advanced mode), slice the model.

It also offers a printer control panel. Different controls will be available from this one such as the option to fill/empty the resin tank. The possibility of cleaning the bottom of the tank can be done by printing a thin film of resin, or the calibration of the Z axis. Various information is provided such as the estimated printing time, the volume of resin used, the number of layers etc. 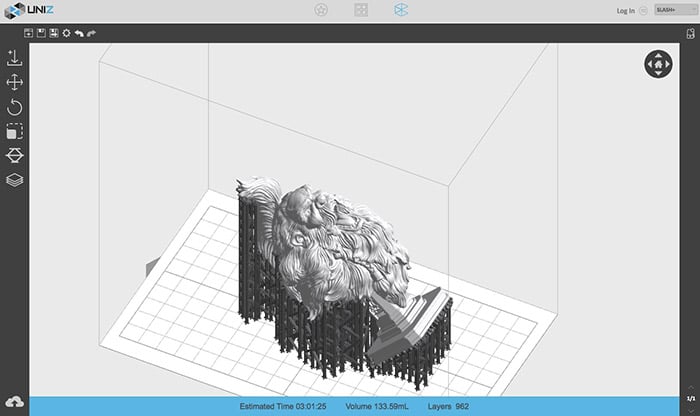 Once you have added media and slicing from the printer software, you will only need to start printing. It will be necessary to make sure that the level of resin in the tank is sufficient, and if necessary to pause the printing in order to refill the tank. An option for automatic tank filling can be selected before printing. Noise level, although it is slightly higher than Form 2, it remains quite suitable and compatible with use in an open office.

The other point to raise is the speed of printing, which has confirmed the status of the Slash+ 3D printer being ultra-fast. An example: Preform software from Formlabs announces a printing time of 8H34 for the realisation of the 3D file of the bust “The Bearded Yell” in 100 microns (ie 953 layers of printing and 131.47 mL). On the Slash+ 3D side, with equivalent layer thickness and design inclination (ie 962 printing layers and 133.59 mL), the UNIZ software indicates a manufacturing time of only 3H01. This makes the Slash+ 3D printer really fast! 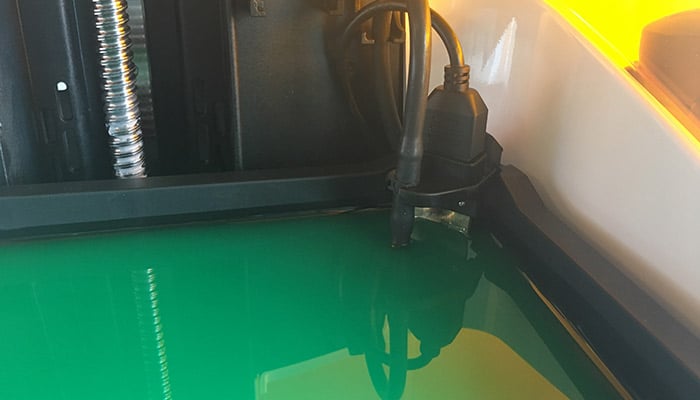 Zoom on the resin level sensor of the tank

It should be noted that in general, PreForm software tends to add more print media than at UNIZ, which can ensure that your avoid unpleasant surprises. These speed tests are also closely related to the resin used. The resin from Uniz3D has the property of a relatively low exposure time for each layer, while the FunToDo resin requires an exposure time of 5 to 7 seconds, lengthening the printing time accordingly.

Where it becomes very interesting is with the fact that the printing time does not increase when the objects are added to the board. Printing a dental model in 30 minutes is actually fast, but using an LCD rather than a laser means that the time will be exactly the same for 3D printing of dental model of 6 or 7.

It should be kept in mind, however, that this comparison with SLA technology does not take into account important parameters such as the surface quality of the part, the success rate of the printing or the necessary post-processing time.

We’ll let you give your opinion on the print results of the Slash+ 3D printer seen below. The appearance remains very clean and globally similar to other resin machines on the market. No post-processing was performed on the parts below. They were simply cleaned with isopropyl alcohol. However, it is possible to pass them in a UV oven to further solidify them or sand them lightly to improve the surface condition. 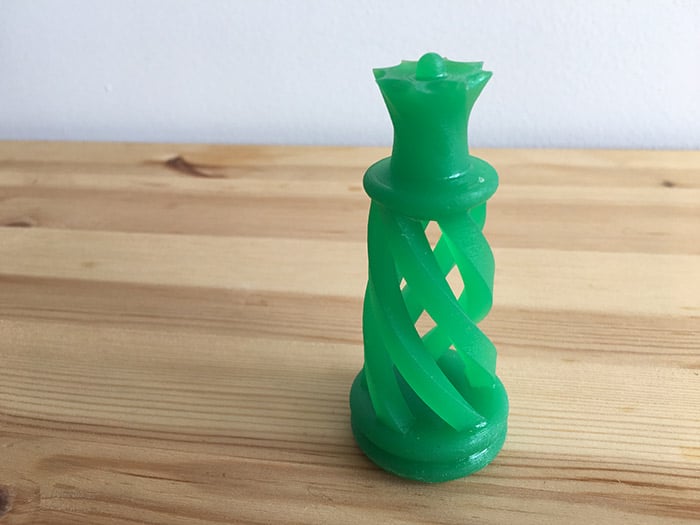 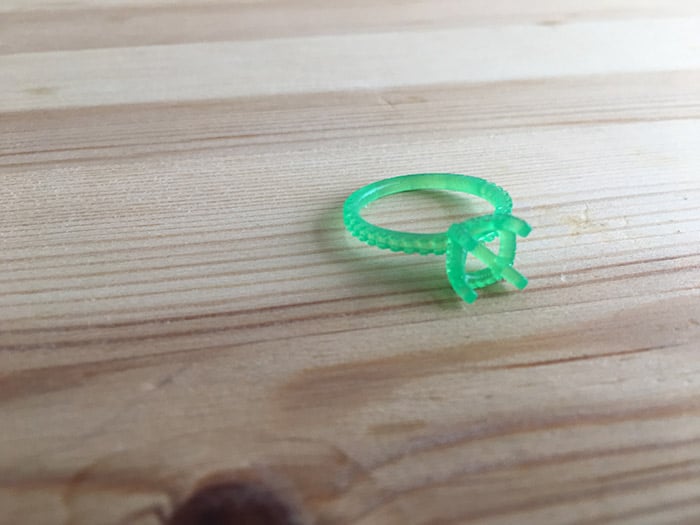 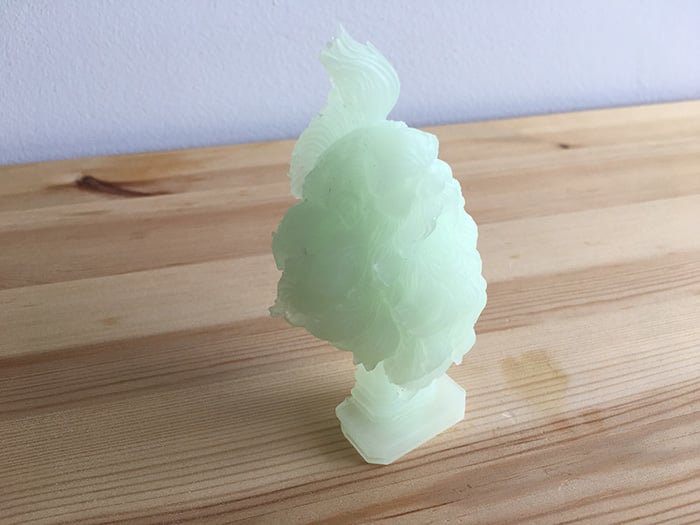 Model “The Bearded Yell” by bendansie, available on Thingiverse 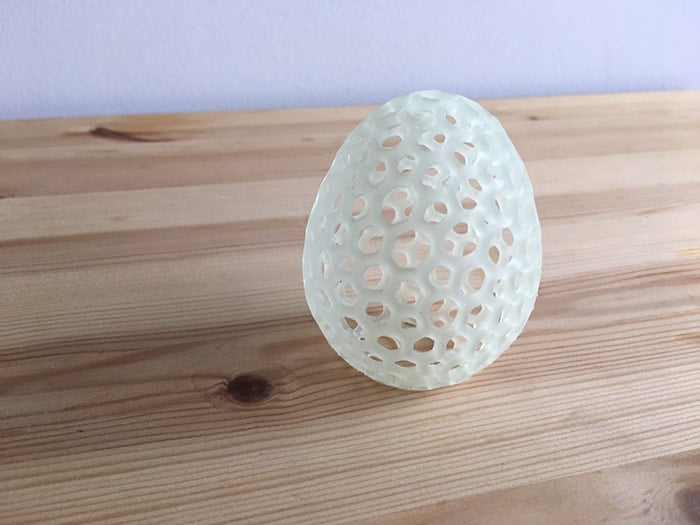 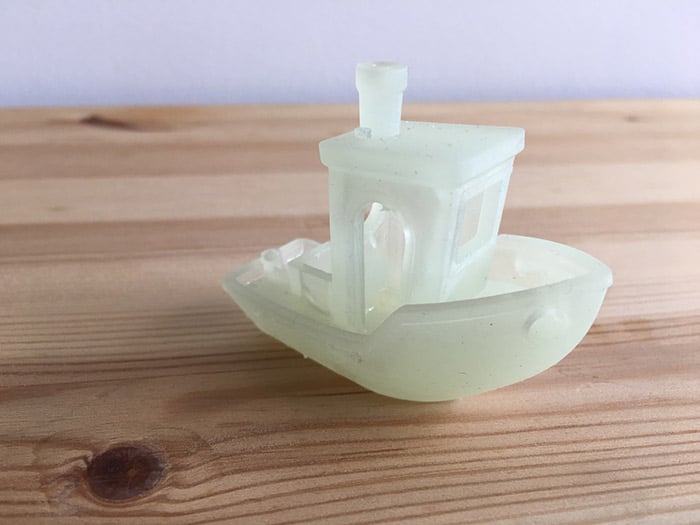 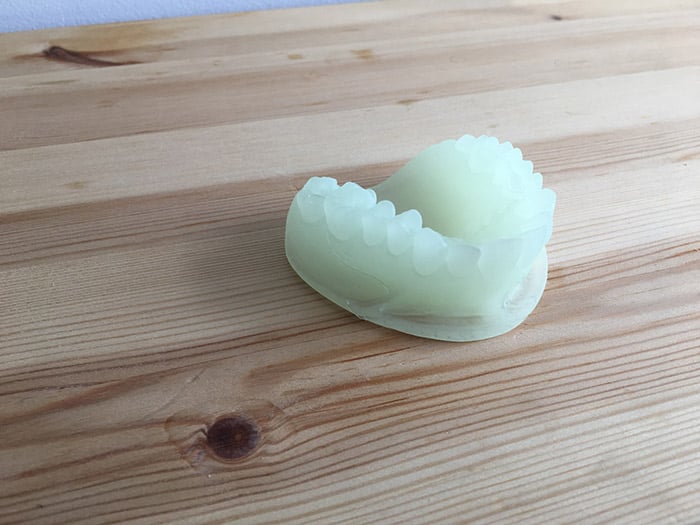 What do you think of the UNIZ3D Slash+ 3D Printer? Let us know in a comment below or on our Facebook and Twitter pages! And remember to sign up for our free weekly Newsletter, to get all the latest news in 3D printing send straight to your inbox!

Yes, the 3D Slash + printer from UNIZ is very fast! And our tests does not contradict this. From there to confirm that it is the fastest in the market, hard to say, but what is certain is that speed has not been favoured at the expense of quality, the latter is also at the rendezvous. With a relatively equivalent price, the Slash + appears as a serious competitor of the Form 2 Formlabs. Difficult indeed not to compare the two models as the number of resin machines affordable and easy to handle on the market are scarce.

Another important argument about Slash + is the ability to use competing resins, this offers a very wide choice of compatible colors and types of materials. Among the points that are lacking the Slash +, we note despite all the lack of a facade control screen, documentation a little too succinct and relatively limited accessories. Nothing blocking so but points that could be improved on future versions. You can find the Slash + from UNIZ at a price of 3876 € TTC on the site of Atome3D here .