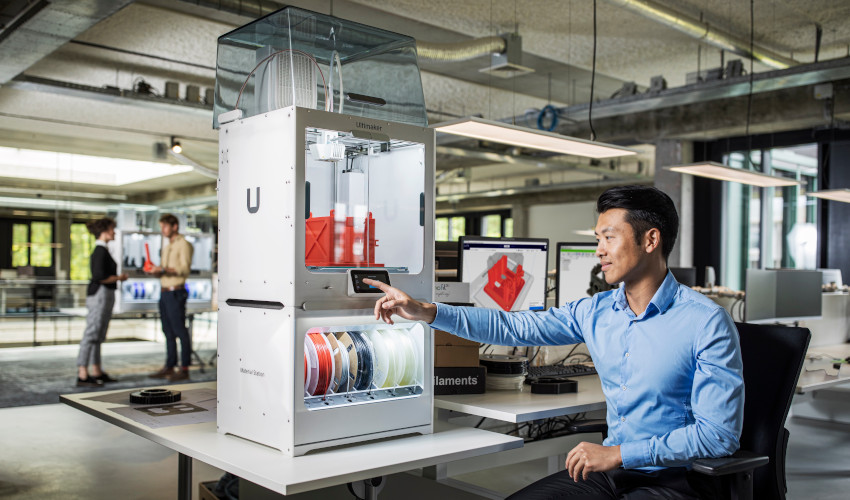 Considered among the sectors pioneers, Ultimaker is currently one of the leading manufacturers of FDM 3D printing, with thousands of machines installed in the factories of large industrial groups, tech startups, makers’ garages and even army workshops. With several generations of machines to its name, Ultimaker currently offers a three 3D printers: the Ultimaker S5, the most advanced of the manufacturer’s models; the Ultimaker S3, a younger sibling of the S5; as well as the Ultimaker 2+ Connect, the entry-level model, a rejuvenated version of the 3D printer which accounts for the brand’s success in recent years.

In addition to this range, the Dutch manufacturer now offers a professional pack called the Pro Bundle which is an improved version of the Ultimaker S5 3D printer. Ultimaker has thus conceived two new pieces of equipment, the Material Station and the Air Manager, which aim to improve the quality of the parts and the Ultimaker experience more generally. The cost of the complete pack, including the S5 3D printer as well as the two additional pieces of equipment, is $ 10,090 including tax (instead of $ 5,995 including tax for the 3D printer alone).

After having tested and given a very good rating to the Ultimaker S5 3D printer (to be found HERE) a few months ago, 3Dnatives is back with the test of the Pro Bundle Pack. So how does the Material Station and the Air Manager work? What are the improvements does the Pro Bundle make? Find our answers in the test below.

Concretely, the Air Manager and the Material Station are presented as two units to be connected above and below the Ultimaker S5 3D printer, respectively. The height of the 3D printer thus increases from 520 mm to 1370 mm high, the width and depth remaining relatively unchanged.

The installation of the two units is relatively intuitive, the manufacturer provides an installation guide for each piece of equipment. For the Air Manager, a hinged cover clips onto the top of the 3D printer, fixed at the back by mounting brackets, allowing the extruder power cable to pass as well as the two bowden tubes. An interesting point to note during the installation of the Air Manager is that it is possible to connect a remote extractor if needed, for example in an industrial environment for example. The Material Station is placed on its side under the 3D printer to which you have to connect the unit’s two bowden tubes to the 3D printer’s feeder.

For power, the S5 3D printer is now connected to the Material Station, itself connected to the mains. The Air Manager connects to the 3D printer. In general, since the Material Station’s power consumption is relatively low, it may be useful to leave it on permanently (while disconnecting the power to the S5 3D printer) in order to ensure optimal storage of the reels. The 3 devices are interconnected via UMB cables allowing information exchange. Indeed, certain data such as the lifespan of the Air Manager filter, the nature of the coils installed or an estimate of the consumption of filaments will be reported on the S5 control screen or directly within Cura. As such, it is important to check, and install if necessary, the latest firmware version on the S5 3D printer. 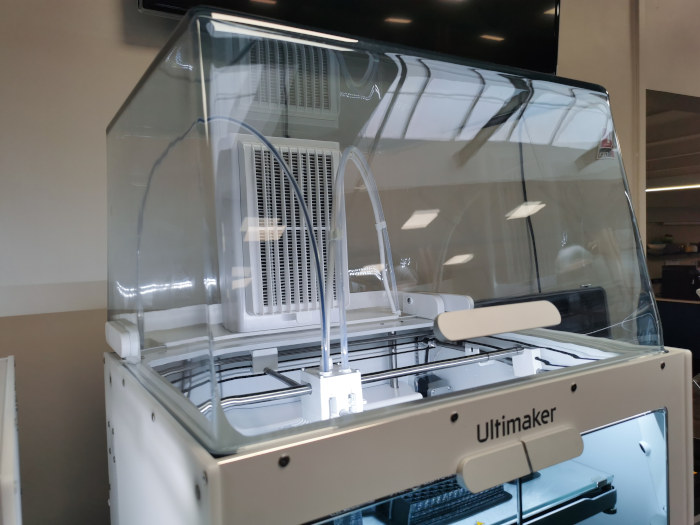 The Air Manager offers two functions to the S5: a now enclosed printing environment and an air filtration system

2. The Air Manager for regulated and filtered impressions

The Air Manager is visually presented as a large glass cover equipped with a filtration system, offering two additional functions to the Ultimaker S5 3D printer. The first function of the Air Manager is to create a truly closed printing environment for the S5 (as the upper part of the 3D printer alone is not effectively closed), guaranteeing a constant temperature within the printing chamber and with that the key to better printing results in perspective. The fan of the filtration system is also equipped with a temperature sensor, and will automatically regulate the temperature of the chamber in the event that it is too high.

The second function of the Air Manager is the filtration of ultra-fine particles rejected during the extrusion of thermoplastic filaments. The filter included with the Air Manager, relatively massive, is an EPA type “high efficiency” filter (and not HEPA, for “very high efficiency”, which is sometimes found in certain models of 3D printers on the market). This filter offers an air refresh rate of 1-50 m3 / h with an efficiency of around 95% according to the manufacturer.

In terms of maintenance, the manufacturer recommends changing the filter after 1,500 hours of use, a notification on the 3D printer control screen will also remind you. Another point of interest is the low sound level of the filtration system, which is below 49dB (working 3D printer included).

For its part, the Material Station is an “intelligent” storage unit for filaments. Capable of storing up to 6 reels, this equipment simplifies the reel loading / unloading experience while controlling the humidity level which can present a real risk for printing materials, especially for sensitive filaments such as PVA or polyamides.

The primary advantage of the Material Station is thus its ability regulate humidity within the equipment. Silicone beads absorb the ambient humidity while a resistance heats the unit when the humidity level reaches 30%, extracting it in the form of vapor. This process is of course fully automated. It is thus possible to store sensitive filaments the day before printing in order to ensure optimum extrusion conditions but also to “save” a reel which has been exposed to ambient humidity for too long.

The Material Station accommodates up to 6 spools of filament

Within the Material Station, each coil is detected by a tag and NFC antenna, allowing it to know the type of material installed and its color in real time. This information is displayed on the control screen of the S5 as well as on the Cura slicer while the print files are being prepared. This automatic detection only works for Ultimaker materials of course, even if the Material Station can accommodate non-proprietary filaments.

When you install a spool into the Material Station, the filament comes pre-loaded with a color LED system to indicate whether the filament was loaded correctly (white: pre-loaded, blue: loaded). An ejection button is installed at each reel location. The unit is also equipped with a filament management system which automatically replaces empty spools without losing any material.

When 3D printing a large part, it is possible to install two reels of the same material, and a relay will be carried out automatically when one of the two coils runs out. The Material Station also makes it possible to estimate the level of consumption of the coils used (note that this estimate is not linked to the weight of the coil but to the time of use and will remain approximate). 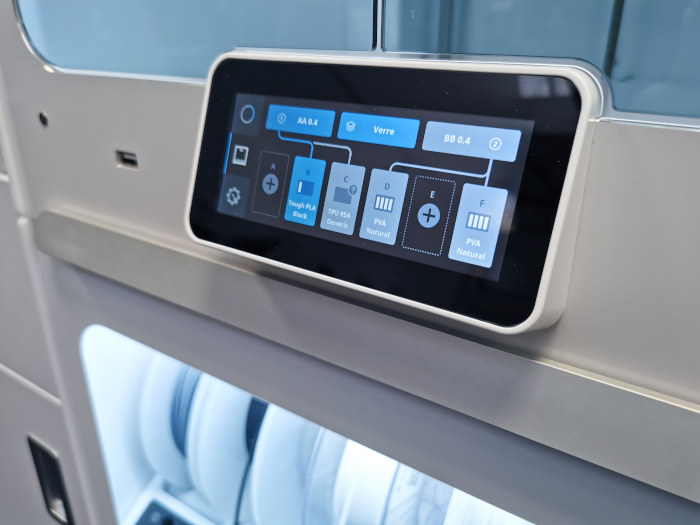 Although the Air Manager resolves the two limitations of the S5 3D printer, namely the open and unfiltered enclosure, this is not a novelty in itself. Other manufacturers have already developed additional filter hoods for their machines (although these remain more standard and do not communicate with the 3D printer). It is also regrettable that the manufacturer did not favor a HEPA type filter for more efficiency, even though you can easily get it from the Ultimaker dealer and replace it yourself. For its part, the Material Station is a real innovation in the 3D printing market and will allow the printing reels to be kept in optimal conditions.

To conclude, the Pro Bundle allows Ultimaker to continue to innovate on its machines without having to reinvent or develop new models of 3D printers. The simplicity of installation, the communication between the devices and the advantages obtained make the Pro Bundle a truly complete pack for users who print many parts for long hours, for which however, it will be necessary to pay the price. Although included in the Pro Bundle, the two devices are sold individually, at a price of $ 3 300 including tax for the Material Station and $ 795 including tax for the Air Manager. To buy or find out more about the Ultimaker S5 Pro Bundle, visit the Ultimate 3D printing store website HERE .