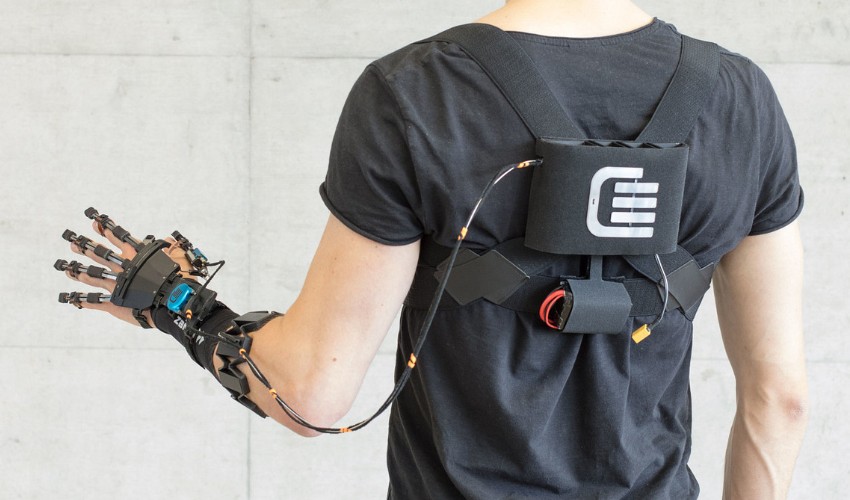 According to the Centre for Disease Control and Prevention, almost 800,000 people suffer from a stroke each year in the US. During a stroke, blood supply to part of the brain is cut off. In 85% of cases, it is caused by a blood clot somewhere in the body; it can also happen when a blood vessel that supplies to the brain bursts. Unfortunately, those that recover from a stroke may experience paralysis, disturbances in movement and speech long after the episode. Patients are typically supported by physiotherapists during rehabilitation in order to relearn movements. At ETH Zurich, researchers are supporting hand movement rehabilitation by developing exoskeleton (i.e. an external frame that can be worn to support the body, either to help a person overcome an injury or to enhance their biological capacities). In order to enable optimal force transmission, igus, a Cologne-based company that develops components made of high-performance plastics, is producing 3D printed finger joints for the exoskeleton.

How does the exoskeleton work?

The exoskeleton consists of a hand module, a wristband sensor and a backpack. The hand module is attached to the patient’s hand using leather straps, while the patient wears the wristband and backpack. When the patient initiates a movement, the wristband transmits electromyographic (EMG) signals to a minicomputer located in the backpack with motors, batteries and control electronics. The computer recognizes from the incoming data that the patient wants to perform a grasping movement and activates the motors. The motors stretch and flex the leaf springs, which form the fingers of the exoskeleton. “Per finger, the exoskeleton applies a force of six newtons,” says Jan Dittli, a researcher at ETH Zurich’s Department of Health Sciences and Technology – allowing the exoskeleton to cover 80% of daily movements. 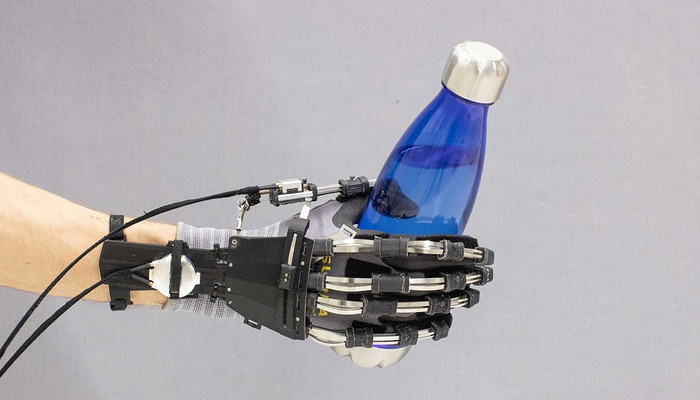 With the exoskeleton, the patient should be able to lift up to 500 grams | Photo Credit: Stefan Schneller (ETH Zurich)

FDM printing was not suitable for all components

To make the exoskeleton suitable for everyday use, the researchers tried to reduce the part’s weight as much as possible thus resorting to additive manufacturing. FDM 3D printing was used in the prototyping stage; it was particularly suitable for rapid prototyping due to its comparatively low cost, ease of use and speed. Both the back of the hand and the finger joints were first printed from ABS. While FDM technology and ABS proved suitable for the back of the hand, both were inadequate for the finger joints due to their challenging functionality. The finger joints hold together the three stacked thin stainless steel leaf springs, and they also have a locking mechanism for the leather straps. Therefore, the 3D printed finger joints made of ABS produced too much friction as Dittli explains: “The friction between the joints and the leaf springs would have been too high with this material. As a result, we would have lost too much energy when moving the fingers.” In addition, the FDM printer could not print the finger joints with the required resolution. For this reason, the ETH Zurich researchers turned to igus. 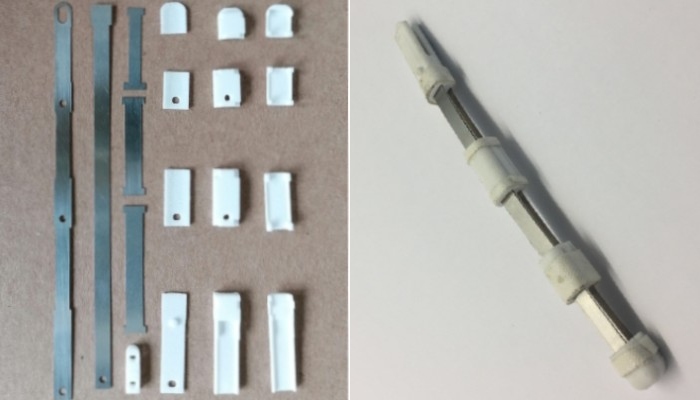 The individual components of a finger can be seen on the left, the leaf springs on the left and the finger joints printed from Iglidur I6 (material) on the right. On the right is the fully assembled finger | Photo Credit: Stefan Schneller (ETH Zurich)

Through the igus 3D printing service, the researchers could use selective laser sintering (SLS) technology and the iglidur I6 high-performance plastic. With SLS printing, it was possible to produce the fine structure of the finger joints without support structures, removing the need for post-processing. It also allowed the exoskeletons to be personalized at low cost as Dittli points out: “We developed an algorithm to adapt the digital model of the exoskeleton to the patient’s hand size with just a few clicks.” This model could then be uploaded to igus and was usually printed overnight thus allowing the 3D printed finger joints to be used after just a few days.

Thanks to iglidur I6, the 3D printed finger joints also produced the required toughness and abrasion resistance; in fact, this material is tribologically optimized and was specially developed for moving applications. In addition, the SLS powder integrates solid lubricants, which promotes ease of handling since no components need to be lubricated. According to igus, the service life of the material should be unlike any other plastic.

The exoskeleton could be 3D printed quickly, cost-effectively and easily. The hand module, for example, is said to weigh just 148 grams and the backpack 720 grams, which is a decisive advantage over current solutions. Dittli explains: “Many exoskeletons used in rehabilitation are currently not portable. Our solution, on the other hand, is light and compact enough to prove itself in everyday life as well, and can thus expand the field of therapy.” One goal for the future is to remove the wristband sensor and instead measure brain waves to run the control system via the mind. “However, that’s still up in the air.” 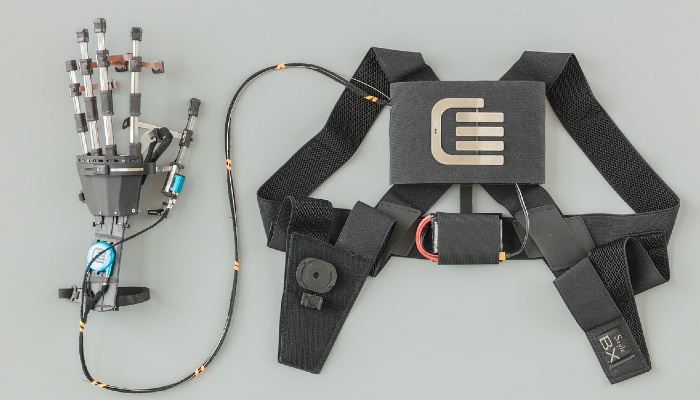 The exoskeleton and its 3 components, the hand module, the sensor wristband and the backpack | Photo Credit: Stefan Schneller (ETH Zurich)

What do you think of this use of 3D printing to optimize performance? Let us know in a comment below or on our Facebook and Twitter pages! Sign up for our free weekly Newsletter, all the latest news in 3D printing straight to your inbox!